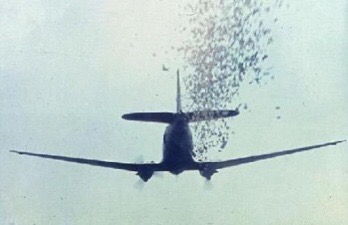 Baghdad – Journal News
Air Force planes fired a million leaflets on the Ayyadiya side of Tal Afar to urge elements to call for surrender.
The military information cell said in a statement on Saturday that “the detachments of psychological operations in the field of radio, audio, social and visual began its field work in order to maintain psychological pressure on the remaining elements of terrorist and advocacy in the Ayadiyah.”
“The Iraqi air force planes took off a million leaflets on Ayadiyah urging people to surrender and instruct them to listen to the radio station about the recommendations and guide citizens for their safety,” she said.

47 minutes ago
(Reuters) – Iraqi forces managed to recover 94 percent of the city of Tal Afar after a week of fighting, the commander of the Tal Afar battle said.

“The remaining areas north of Tal Afar are the villages of Alo and Rahma, east of Tel Afar and the area of ​​Ayadiyah and surrounding villages, and the city has been liberated, leaving only the military district and the northern industry,

The President of the Kurdistan Region Massoud Barzani received on Saturday, a senior French delegation included Foreign Ministers Yves Laudrian and Defense, Florence Barley and the accompanying delegation, pointing out that the meeting in the presence of Vice-President of the province, Kosrat Rasul Ali and a number of officials Administrators and military.

France’s defense minister praised the heroic role of the Peshmerga forces and pointed to the permanent threat posed by terrorism at the global level.

The French minister explained in another part of the meeting the official position of his country on the referendum and called for continued dialogue between the region and Baghdad until reaching a result satisfactory to both sides.

Barzani, for his part, thanked the people, the president and the French government and promised a great friend to the people of Kurdistan, highlighting the dangers of terrorism, the liberation of Mosul and the role of the Peshmerga in the process, and said that in order to ensure the stability of the region after the ” Combating the causes of al-Qaeda’s emergence and “preaching” In addition to the military war, there must be an intellectual, economic and social war against terrorism.

Barzani expressed concern about the situation after the “call” and the emergence of a new problem is the lack of clear political plans, although the Kurdish political leadership confirmed before the process of liberating Mosul on the existence of a political plan suitable for that stage.

On the referendum, Barzani told the delegation clearly that the people of Kurdistan can not repeat the failed experiments, noting that as long as the voluntary union has failed and the term of partnership has been neglected for 100 years, the people of Kurdistan have chosen their way and want to live with Baghdad as good neighbors with friendly relations.

Barzani stressed that the referendum is a democratic right for the people of Kurdistan, which is taking steps towards independence from violence and peace mechanisms in dialogue with Baghdad before and after the referendum. He called on France as a symbol and supporter of freedom to understand the desire of the people of Kurdistan and the suffering of the nation over the last hundred years.

At the end of the meeting, the two sides stressed the continuation of friendship and coordination between them.

Economy News _ Baghdad
The Rafidain Bank on Saturday gave guidance to its branches on loans of small projects to citizens amounting to 15 million dinars, while called on its branches to facilitate the granting of such loans.
The bank’s information office said in a statement received by the “Economy News”, a copy of it, “The bank informed its branches in the event they were in the process of coordinating and promoting the transactions of granting loans to small projects, amounting to 15 million dinars, by adopting the identity of the Baghdad Chamber of Commerce or the identity of the Federation of Industries or any identity proving the practice of the profession “He said.

The office added that “the bank called on its branches to facilitate the task of granting these loans,” stressing “not to delay or put obstacles in granting.”

A statement issued by the Iraqi government said that Abadi briefed during his tour on what was established in the (mall) and services to be provided to citizens.

The statement quoted Abadi as saying that “at a time when we are fighting and winning the gangs of terrorist advocates, we are opening investment projects and this is a great success for Iraq.”

“The terrorist wanted to destroy life, but the Iraqis proved that they were the builders of life,” he said.

“Iraq is a success story, and this is an invitation to all businessmen and investors to invest here in this country, which began to occupy its natural position,” Abbadi said.

The Municipality of Baghdad had announced just days before the opening of the mall.

• The mall is an important landmark of Baghdad.

• The mall and its annexes are not a regular construction, but an investment project, but it gives a picture of balance with the great victories in the fighting fronts during the government of Abbadi.

• It is a commercial shopping complex in the heart of Baghdad, where it is located in the Harthiya area at the Damascus intersection with Al-Kindi Street.

• The mall also has a large and sophisticated hospital run by Dublin Health Medical Services.

• The Mall is available on a 10-storey parking lot with a capacity of 1000 cars.

• It is expected to contribute to a qualitative shift in the field of commercial, marketing, hotel and medical services in Baghdad.

• The project is likely to contribute to the provision of more than three thousand job opportunities for young Iraqis of graduates and the various disciplines of engineering, medicine, software and management of institutions, tourism and escorts. 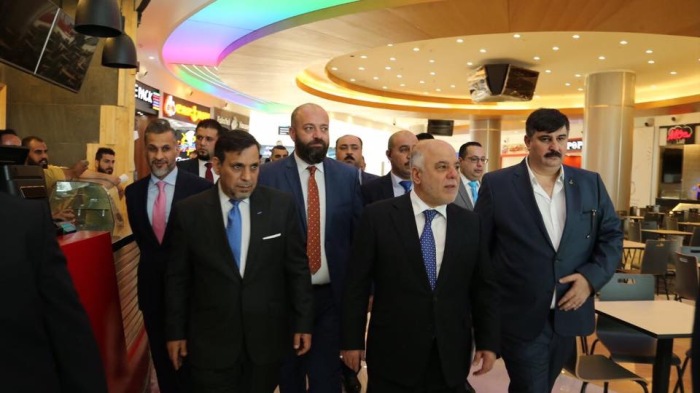 the federal police and the popular crowd have completed their duties in the coming operations, Tal Afar, after achieving their goals.

“I offer my sincere thanks, appreciation and gratitude to the heroes of the federal police forces and the Mujahideen in the popular rally after they have fulfilled their sacred duty and complete the liberation of their goals set in the coming operations, Tal Afar,” interior minister Qassim al-Araji said in a press release.

“More victories and successes for the people of Iraq, the Asians, who loved the language of victory and translated it into action on the battlefield.” 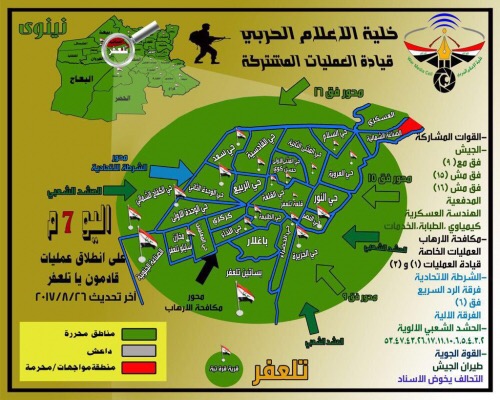 Editorial Date: 2017/8/26 17:04 • 17 times read
(Baghdad: Al Furat News) The Ministry of the Interior announced the end of its federal police forces and their sacred duty towards the liberation of its goals drawn in the operations of those coming Yatlafar.

“Minister of Interior Qassim al-Araji expressed his thanks and gratitude to the Federal Police Forces.” I extend my sincere thanks and appreciation to the heroes of the Federal Police Forces and the Mujahideen in the popular rally after they fulfilled their sacred duty and complete the liberation of their goals, “the statement said. Operations are coming, Tal Afar. ”

“More victories and successes have been given to the men of Iraq, the Asahos, who loved the language of victory and translated it into actions on the battlefield.”

The federal police forces participated in the liberation of Tal Afar from the Da’ash terrorist gangs where the federal police stations, the rapid response and the popular mobilization were concentrated in the northwestern part of the judiciary. Most villages and neighborhoods were liberated in this sector.

The commander-in-chief of the armed forces Haider al-Abadi arrived in Tal Afar district on Saturday, in line with the rapid progress being made by the joint forces in the judiciary.

It is worth mentioning that the joint Iraqi forces achieved new field gains on Saturday, until they are on the outskirts of the announcement of Tal Afar district completely liberated.

The Kurds have a strong relationship with France.

Baghdad today – Arbil
MP of the parliamentary bloc of change Kawa Mohammed, Saturday, that the Democratic Party of Kurdistan has shown flexibility in postponing the referendum, indicating that a Kurdish delegation will visit Baghdad to complete the platforms to resolve the outstanding problems between the center and the region, “US sponsorship.”
“The Kurdish delegation will return to Baghdad after Eid al-Adha holiday, to complete political talks with the federal government and under the auspices of America,” Mohammad said in an exclusive interview with Baghdad today.
He added that “will complete discussions on resolving outstanding problems, between the two sides, rather than hold a referendum,” noting that “there is some flexibility by the Kurdistan Democratic Party to postpone the referendum.”
“The referendum is an inappropriate step, and the internal situation in Kurdistan is political and economic, is not prepared and there is internal dissatisfaction and resentment about the timing and procedures of the referendum,” he stressed. “Barzani should stick to the internal voices to reverse the decision to hold the referendum.”
The Kurdish delegation arrived in Baghdad on Monday, August 14, and met with the Prime Minister Haider Abadi.
“The dialogue with the Kurdish delegation was in accordance with the interests of the country,” Abadi said in his weekly speech, adding that “the atmosphere of respect and understanding dominated the government meeting with the Kurdish delegation.”
Abadi called on Kurdistan officials to “cooperate in the field of returning displaced people to their liberated areas in Ninewa,” adding that “the government is working to employ social networks to protect citizens and reduce their use badly.”
The Kurdish newspaper that the Kurdish delegation, which visited Baghdad, failed to convince the federal government to support a referendum on the secession of the Kurdistan region to be held on 25 of next month.
The newspaper said quoting a source in the National Alliance, which belongs to Prime Minister Haider Abadi, said that “the delegation tried to get support from Abadi on the subject of the referendum, but he expressed his absolute rejection, and asked the Kurdish delegation to negotiate with the federal government on outstanding issues between the parties.”
The MP of the Badr parliamentary bloc, Amal Attia said in a statement to (Baghdad today), “The Secretary-General of the Badr Organization Hadi al-Ameri said during a meeting with the Kurdish delegation, his rejection of the separation of Kurdistan and the referendum, because it presents Iraq to the division