“We welcome the arrival of international investigators and Iraq needs the international efforts to fight corruption, especially since corruption is international as well as international terrorism,” he said, adding that “the Integrity Committee is ready to offer all facilities and cooperation in this regard.”

Prime Minister Haider al-Abadi has formally asked the United Nations to help him reveal the fate of $ 361 billion missing from the country’s budgets between 2004 and 2014, as well as the fate of thousands of projects and investments in the sectors of electricity, housing and agriculture. Even though the state spends $ 98 billion over 10 years on these sectors.

“The Iraqi side has signed a memorandum of understanding with the United Nations to bring in and involve specialized international investigators to uncover the country’s major corruption files,” the office said in a statement on Thursday (August 11, 2016).

The head of the CIA said there was “no imminent threat” of a nuclear war with North Korea amid escalating war of words between the two countries.

In an interview with Fox News, Mike Pompio said Pyongyang “is moving at an even more alarming pace than ever” under its weapons program, adding that testing another missile would not be surprising.

But warned that Washington’s “strategic patience” had run out.

Pyongyang and Washington resorted to fireballs, while US President Donald Trump threatened to “pour out fire and anger” at North Korea.
Pompeo said he was “very confident” that the North Korean leader would “continue to try to develop” his country’s weapons program.
Asked when North Korea would deploy a nuclear weapon that could target the United States, he replied, “They are closer than ever” to do so.

Trump said the US military was “ready and ready” while Pyongyang accused Trump of pushing the Korean peninsula to the brink of nuclear war.
China calls for avoiding escalation

Chinese President Xi Jinping urged his US counterpart Donald Trump to avoid escalation, which could worsen the crisis with North Korea.

The Crown Prince issued an order appointing his brother the current ambassador to the United States, Prince Khalid bin Salman, as Saudi foreign minister instead of al-Jubair, the source said.

Khalid bin Salman was recently appointed ambassador to his country in the United States instead of Prince Abdullah bin Faisal al-Turki.

The website added that Khalid bin Salman was not the first Saudi ambassador to be appointed Minister of Foreign Affairs, but Al-Jubeir himself before taking office, he served since 2007 to 2015 as ambassador to Saudi Arabia in Washington.

RAMALLAH, Iraq – The
head of the National Alliance, Ammar al-Hakim, on Sunday discussed with US Ambassador to Iraq Douglas Seelman the security and political situation, pointing out that the MPs of the wisdom bloc are seeking to pass laws that contribute to state building. Between Baghdad and Arbil.
“The head of the National Alliance, Ammar al-Hakim, received at his office on Sunday, the US ambassador to Baghdad, Douglas Silliman, and discussed with him the latest developments in the security and political situation and the war against the promotion and consolidation of the territorial integrity of Iraq,” he said in a statement, .
He stressed that “the need to hold the elections on time and the importance of the adoption of the law on them,” noting that “the deputies of the bloc of wisdom seek to pass laws that affect the lives of citizens and contribute to the building of the state.”
For his part, Silliman said that “Washington encourages the continuation of the dialogue between Baghdad and Erbil to resolve the outstanding problems between the two countries and to stay on a unified Iraq,” pointing out that “his country’s support for the Iraqi elections on time and complete the liberation of land from drowning gangs and the terrorist.”
He congratulated the American ambassador Ammar al-Hakim on the occasion of the formation of the national wisdom stream, adding that “it will be a qualitative addition to contribute to the investment of youth energies in Iraq after an encouraging.”
The US ambassador denied “the reports that the international coalition forces hit the faction of Sayed al-Shuhada Brigades of the popular crowd.”

The governing body of the National Alliance, representing the ruling Shiite component in Iraq Sunday evening, held a regular meeting in the presence of the leader of the coalition Ammar al-Hakim, and Prime Minister Haider Abadi.
The meeting comes at a time when a delegation from Kurdistan will visit Baghdad on Monday to negotiate the issue of the referendum.
The adviser of the President of the Kurdistan Region Huramifi said earlier that the delegation of the Higher Committee for the referendum in Kurdistan will visit Baghdad on Monday and will hold meetings with the three presidencies and ambassadors of countries and foreign diplomatic bodies in Baghdad to explain the point of view of the Kurds on the referendum to be held on September 25 next.
“It is scheduled to meet the three presidencies of the republic and the government and the House of Representatives and the Shiite alliance and the ambassadors and other parties, according to the tweet,” Hawrami wrote in his social networking site Twitter.

54 minutes ago
The delegation of the Supreme Committee for the referendum in Kurdistan will visit Baghdad on Monday and will hold meetings with the three presidencies and ambassadors of countries and foreign diplomatic bodies in Baghdad to explain the point of view of the Kurds on the referendum to be held on September 25 next .
“It is scheduled to meet the three presidencies of the republic and the government and the House of Representatives and the Shiite alliance and the ambassadors and other parties, according to the tweet,” Hawrami wrote in his social networking site Twitter.
It is scheduled that the Kurdistan Region on the twenty-fifth of the month of September next referendum, which will pave the way for the declaration of the State of Kurdistan in the future.

The Patriotic Union of Kurdistan (PUK) MP Saman Fattah said on Sunday that the Kurdish delegation that will visit Baghdad will have full negotiating powers over the referendum.

“The Kurdish delegation that will arrive in Baghdad tomorrow will have all the powers to negotiate,” Fattah said in an interview with Baghdad today. “Talk about canceling or postponing the referendum is difficult to implement because it has become a matter for the Kurdish people. Who decides that. “

He added that “the Kurds still believe that they are a major part of the components of the people, and this is embodied in the Iraqi constitution, which voted by the Kurds themselves,” noting that “the referendum, whether negative or positive, will not mean direct separation.”

A high-level Kurdish delegation is expected to arrive in Baghdad on Monday to discuss the referendum.

The governor of Kirkuk has announced today that the Kurdish delegation will represent Baghdad representing the Kurdistan region and Kirkuk within the region, which is a major obstacle to the referendum file, especially in light of Baghdad’s insistence that Kirkuk is a province of the center. 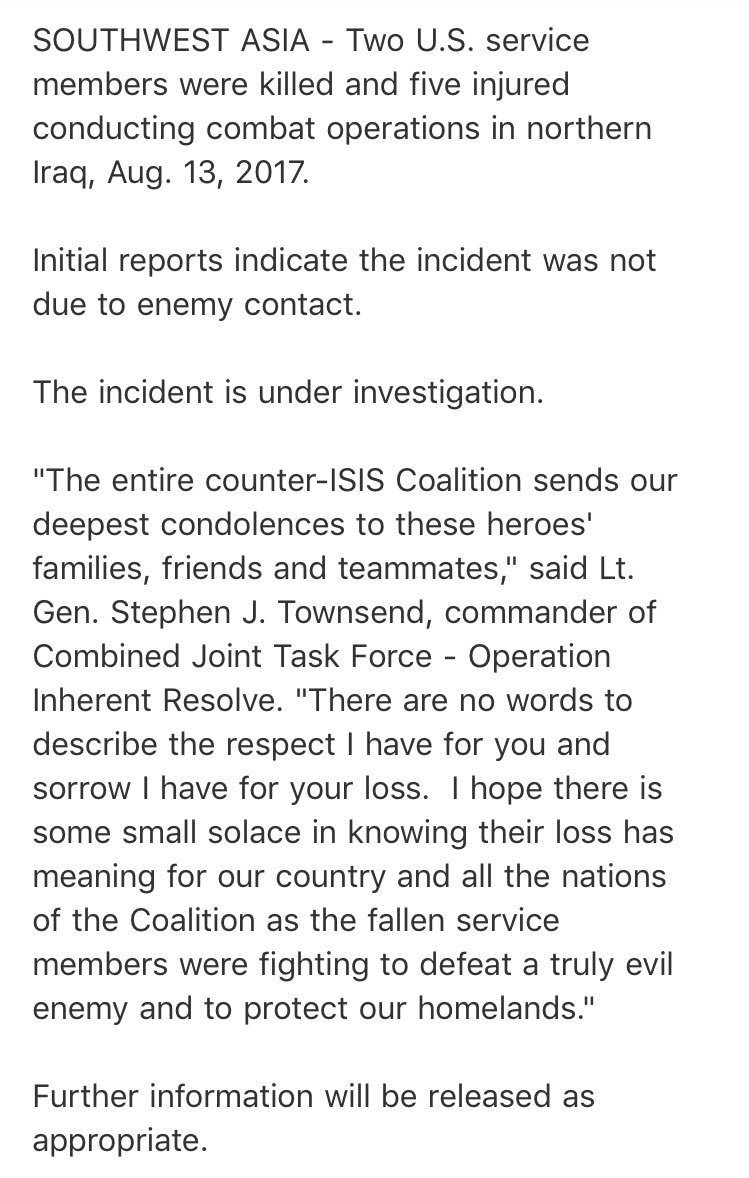 Shafaq News / Al-Qaeda announced on Sunday responsibility for the attack with a bombing targeting the US military west of the city of Mosul.
Earlier in the day, the US military said two soldiers were killed and five wounded in combat operations in northern Iraq.

ERBIL — The Kurdistan Region’s High Referendum Committee is set to send a delegation to Baghdad on Monday to discuss the upcoming independence referendum with Iraqi officials and political parties.

In a meeting chaired by Kurdistan Region President Masoud Barzani, the committee decided on Saturday to send a delegation to Baghdad for negotiations over the September 25th independence referendum with authorities and political parties in Baghdad.

The Kurdistan Region’s delegation is seeking to reach an understanding with Baghdad that partnership between Kurdistan and Iraq has failed, therefore, Kurdistan has decided to hold a vote to determine a different formula of relationship with Baghdad.

The Kurdistan Region’s delegation consists of representatives of all ethnic and religious components of the region as well as the political parties.