The longest suspension bridge in southern Iraq was opened in Basra province on Thursday.
According to press sources, Basra Governor Majid al-Nasrawi and a large number of local officials, security officials and dignitaries attended the opening, stressing that the bridge will serve thousands of citizens on the banks of the Shatt al-Arab.
For his part, adviser to the governor of Basra, Abdul Karim al-Roumi, that “this bridge implemented by the company MiG Italian more than seventy million dollars,” noting that “the bridge will solve the problems of bottlenecks on the old bridge.”

[INA-BAGHDAD]
Foreign Minister Ibrahim al-Jaafari and Jordan’s Foreign Minister Ayman Safadi signed an agreement Thursday between Baghdad and Amman on political consultations between the two countries.
The al – Jaafari , according to a statement to his office at a depth of fraternal relations between the two countries, praising Jordan ‘s stances in support of Iraq in its war against terrorism, saying: We thank Jordan for its support of Iraq, he has stood us in many areas, and voted for us in the Arab League. ”
He added , ” We aspire Jordan plays an important role in supporting Iraq in the reconstruction and construction, also it played an important role in supporting Iraq ‘s confrontation against Daesh gangs terrorist, adding that he had asked for more efforts to take care of our children Iraqis and daughters in the Hashemite Kingdom of Jordan. ”
for his part, Foreign Minister of land N: We stand by Iraq and we are proud to be at his side in the battle against terrorism and to be part of Iraq in the battle of the restoration of the important role. ”
He pointed out that ”
The security of Iraq and its stability in the eyes of the King and Jordan is an essential corner of the security and stability of the region and then stand by Iraq is to stand by the security and stability of the region, and that the war on terrorism is a war we all fight in defense of our home and our peoples and our values ​​and ethics, Al- Safadi said: “We support the Iraqi brothers in their political process aimed at consecrating the state of citizenship that provides, allows and allows all the Iraqi people to build their state.” Or the effort that brings us together in the framework of our international relations and within the framework of the international coalition and within the framework of the Arab effort to eradicate this scourge and liberate our peoples and our region. ”
http://www.alliraqnews.com/modules/news/article.php?storyid=64740

The @USEmbBaghdad issued this statement on their Facebook page. https://www.facebook.com/USEmbassyBaghdad/posts/10155582578114304 … 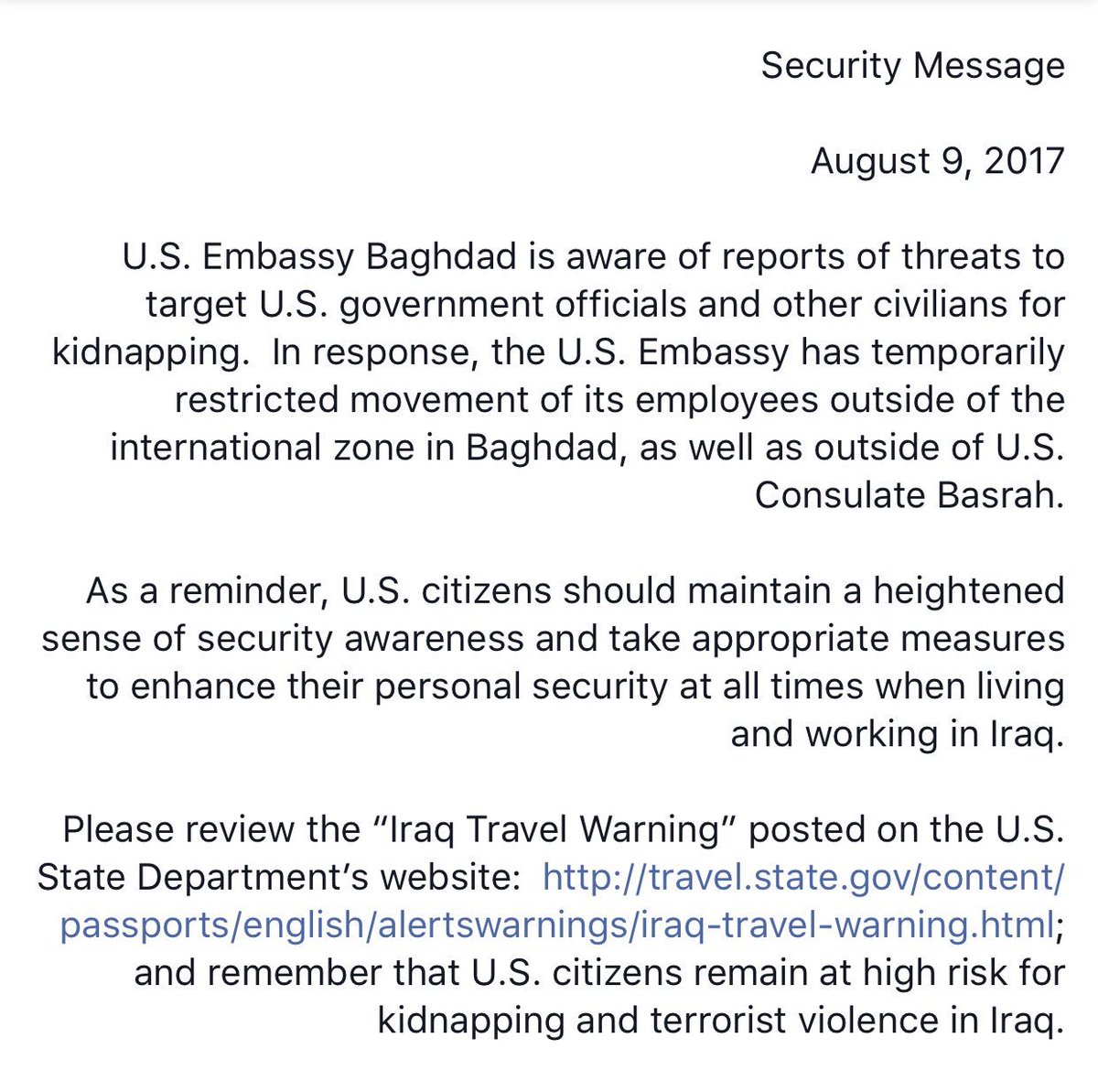 Oil Minister Jabbar al-Luaibi and Saudi Deputy King Mohammed bin Salman discussed the opening of land ports, direct flights and encouraging trade exchange and investments from the Saudi private sector, stressing the commitment of Iraq and Saudi Arabia to the “full” agreement to reduce oil production.
“The Deputy Custodian of the Two Holy Mosques Prince Mohammed bin Salman bin Abdul Aziz Al Saud met in Jeddah with Iraqi Oil Minister Jabbar al-Allaibi,” the Saudi Press Agency said in a statement.
During the meeting, the two sides reviewed bilateral relations, especially the joint opportunities in the economic fields in general and energy in particular, including the opening of land ports, direct flights and encouraging trade and investment from the private sector. The discussion also touched on the close cooperation between the two countries in the field of policy coordination And reaffirm the two countries’ full commitment to the agreement to reduce oil production until markets reach the target balance of this agreement. ”
The Iraqi Minister of Oil conveyed the greetings of the Iraqi leadership and people to the Custodian of the Two Holy Mosques and his deputy. The Iraqi government wishes the Kingdom further progress and prosperity. Areas of interest to the people of the two countries. ”
Oil Minister Jabbar al-Luaibi arrived in Saudi Arabia on Tuesday at the head of a high-level delegation at an official invitation.

In a press statement, Tulaibawi said that the US commanders and Kurdistan regional president Masoud Barzani pressured Baghdad’s government to exclude IMIS militias from the operations and they succeeded in that.

The spokesman for Prime Minister Saad al-Hadithi’s office said on Thursday that the future of Iraq and its fate is not limited to one party or a specific body.

Al-Hadithi said in an interview with “Baghdad today”: “Let us to hold a serious dialogue, open on the outstanding issues between the federal government and the region,” stressing “the adoption of dialogue as a means to reach solutions and exits of the problems between the parties under the Constitution, , And is based on the ground of national consensus. “

The president of the Kurdistan region, Massoud Barzani, confirmed on Thursday that he understands the remarks of some countries on the date of holding a referendum in the region, while pointing out that the referendum does not need to be authorized by any party, saying that opponents of the referendum “will commit political suicide.”

The new Arab newspaper published a report in which it said that there are efforts by the Iraqi government to expand the dependence on electronic payment cards (ATM), to give employees salaries, which paves the way for reducing the deal in paper currency “dinar”.

“The Baghdad government is adopting a plan to implement the” digitization “of salaries, hoping to complete them in 2020,” the report says.

The “settlement of salaries” means disbursing directly through banks instead of delivery to employees in the workplace, through a special account opened to the employee at the bank and drawn by the electronic payment card, or receipt in cash.

The newspaper quoted experts and officials that “the system is prevalent in many countries of the world with the expansion of banking business and services, and with the increasing volume of electronic transactions, it had to be applied.”

They pointed out that “the application will contribute to reduce the time and effort and cost, in the transactions of banks and transactions of citizens of different financial, in addition to reducing the handling of cash and risk.”

The process of “settling salaries” 19 government and private banks and foreign. The number of employees in the public sector who earn their salaries by cards is about four million to one million in the private sector.

The mass of wages in Iraq 35 trillion dinars (27.5 billion dollars), according to earlier statements of Abdul Zahra Hindawi, spokesman for the Ministry of Planning and Development Cooperation.

The number of Iraqis earning salaries and pensions, along with monthly benefits of about 7 million, is estimated to be expected by the government before 2020, while accurate figures on the private sector are not available.

The Iraqi Electricity Ministry said in a statement that the Iraqi Trade Bank (Hukoomi) will issue “MasterCard” cards to ministry employees free of charge once if an account is opened inside the bank. The second time the cost of the issue will be 40 thousand dinars (32 dollars) if lost.

The ministry added that the Iraqi Trade Bank will set up ATMs at the Ministry of Electricity to pay employees salaries on time when the information is sent to the bank by the ministry. The salary of the employee will be 2000 Iraqi dinars (less than two dollars), regardless of its value.

She explained that the employee has the right to withdraw his salary from any ATM outside the headquarters of the ministry, and bear the cost of less than 3 dollars, if the bank outside the framework of the Iraqi Trade Bank.

In a press statement last March, Christine Goz, head of the International Monetary Fund’s mission to Iraq, said Iraq needed more reforms to create fiscal space for overall growth, boost the business environment, reduce corruption and reform the banking sector to support growth. Led by the private sector, and diversification into the economy.

He pointed out that the sharp drop in oil prices caused the decline of the total international reserves of Iraq, and that the total public debt rose from 32% to 64% of GDP in the period from 2014 to 2016, and slowed growth in credit and increased non-performing loans at the state-owned banks and banks Especially during the past year.

Iraq sets a stone by entering the international market with its first sale of independent bonds:

The Political Bureau of the Patriotic Union of Kurdistan, announced on Thursday, the dismissal of MP from the National Union in the Parliament of Kurdistan, Farhad Senkawi, after participating in the movement of “No” rejecting the referendum of the region, which began two days ago in Sulaymaniyah.

The Patriotic Union of Kurdistan (PUK) political bureau said in a statement that “the strategy of the National Union is going to conduct the referendum and the right to self-determination, and any departure from this strategy by any person, will have consequences according to the party’s rules of procedure.”

“Farhad Senkawi, who has only received 23 votes in the Senkau region in the previous parliamentary elections, has been able to reach and enter the dome of the Parliament of Kurdistan after the National Union of Kurdistan assured him the necessary votes, but in these days we see him in common with the movement Which is called “No to the referendum,” after saying a while ago, “The current time is the most appropriate times to declare independence, but the political leaders in the Kurdistan region do not dare to declare independence.”

The statement continued, “Therefore, we decided to expel him from the ranks of the Patriotic Union of Kurdistan, and the parliamentary bloc, and if the activation of the Parliament of Kurdistan, we will work to restore all privileges received by Senkawi through the party and legal ways.”