The Iraqi Ministry of Communications intends on Sunday , Launch of the National Internet Project in Iraq.

“It plans to hold a press conference at its headquarters in Baghdad to launch the national Internet project in Iraq on Sunday,” the ministry said in a statement on Thursday.

“During the conference, senior officials from the ministry and the executive director of the National Internet Project in Iraq will speak,” she said.

She pointed out that ” Conference addresses A detailed definition of the first and leading technological project in Iraq, and the stages of completion, and the nature and conditions of achievement, with full presentation of the benefits of this promising project on the Iraqi economy and society, and the mechanisms of work and direct distribution of services, and how it will change the reality of the Internet and communications in Iraq radically.

The Central Bank of Iraq, on Thursday, the amount of selling the dollar to Iraqi pilgrims at the official price.

“The Rasheed Bank, Al-Rafidain Bank and the Iraqi Commercial Bank were directed to sell the dollar to pilgrims,” ​​the bank said in a statement.

He added that “the manfest for pilgrims will be adopted instead of the ticket in the sale, for $ 3,000 per pilgrim, at the official price.”

The Central Bank of Iraq allowed yesterday to sell the dollar to the pilgrims of the House of God at the official rate through the banks authorized.

Under the auspices of the Association of Iraqi private banks, the General Authority for Taxes in the Federal Government and the General Administration of Taxation in the Kurdistan Regional Government in Erbil on Wednesday a joint record to coordinate work in the field of prevention of double taxation.
The delegation of the Association of Iraqi Private Banks included Samir Abbas Al-Nasiri, Advisor to the Association, Shirwan Anwar Mustafa, the representative of the Association in Kurdistan, Kifah Ismail, Deputy Director of the International Bank of Kurdistan, Saman Burhan, a friend of Ceyhan Bank, Huda Jassem, Yusuf Wadud and Majed Michel. The delegation also participated in the meeting of the Central Bank of Iraq The delegation of the General Authority for Federal Taxation, headed by General Manager Abbas Ali, was joined by Mr. Karim Salem Kamash, Director of Business and Professional Affairs, and Mr. Abdul Aoun Al Madi, Director of the Central Bank Branch in Kurdistan Region. The Executive Director of the Legal Department, Wa’am Salman, Director of the Legal Department, and Emad Abdul Sada Farhan, a company expert, included the delegation of the General Directorate of Taxation in the Kurdistan region, headed by Kamal Tayeb Qader, both Niazi Salahuddin Mustafa, director of the corporate section, while a delegation from the Economic Council and advisers from the provincial government included both Mr. Othman Shwani, economic coordinator in the region, Waras Khoshnau Director of the Center for Strategic Studies and Information Kurdistan
The document, signed by the General Authority for Taxation, was signed by its Director-General, Mr. Abbas Ali, and signed by the General Directorate of Taxation in the Region. The Director-General Kamal Tayeb is able to review the amendments to the Federal Income Tax Law No. 113 of 1982, which has already been approved by the Parliament of the Territory, Tax
The joint minutes, which will be presented to the higher authorities in the federal government and the provincial government to approve the paragraphs on the unification of the annual regulations, to be participated in the preparation of representatives of the two tax administrations, and approved the record participation of the tax administration in the province in the controls committee of the General Authority for Federal Taxation, Of the project for the electronic system of tax accounting and the application of the system of granting the tax number and issuance of the tax card
The two sides agreed through the minutes to facilitate the procedures of tax accounting for Iraqi private banks in the region so that they are held with the headquarters of the banks and all of its branches in Iraq
The two sides agreed to recognize the documents and the acquittals issued by each of them by the other side
The two sides decided to form a joint joint coordination committee to follow up these decisions and obtain the necessary approvals from the official references in both Baghdad and Erbil to put into effect
The meeting was attended by a delegation from the Association of Private Banks, including Samiralnseiri, Advisor to the Association of Private Banks, Majid Michel, Director of Public Relations, Sherwan Mustafa, Representative of the Association in Erbil, as well as a number of Directors,
As well as representatives of the Central Bank of Iraq
The two sides held their previous meeting in Barbil on June 12, devoted to end the double taxation between Baghdad and Erbil and coordinate the tax procedures and support the work of private banks to contribute to revitalize the economic cycle in the region and in Iraq in general.
The Association of Iraqi Private Banks, previously held a series of meetings with the administration of the Kurdistan Region of Iraq in Erbil, to discuss the obstacles that prevent the strengthening of cooperation between private banks and tax services in the region, and called for the Association to hold quarterly joint meetings every 3 months, the rate of 4 meetings annually, To follow up the issues of bilateral cooperation in the field of taxation and banking between Baghdad and Erbil.

A security source from Nineveh police said on Thursday that Qayyara floating bridge has been closed for seven days, and may remain closed for another four days, causing difficulties for the movement of residents of the region.

The reason behind the closure of the bridge is tensions between the Iraqi army troops controlling the bridge and the Shi’ite militias of Imam Ali Brigade because of the latter’s control of oil wells in the region and selling the crude oil through illegal means, Captain Zakaria Shawkat form Nineveh police told BasNews.

He noted “This prompted one of the officers to remove one of the pieces of the bridge under the pretext of maintenance to block the way of the tank trucks coming to and from oil wells in Qayyarah.”

Moreover, the residents of Qayara called on the local and federal governments to soon open the bridge to lift the burden of having to take difficult alternative routes to travel.

Qayyara town, located 45 km south of Mosul, was taken by Islamic State militants following the fall of Mosul into the group’s grip in mid-2014. The Iraqi army and US-led coalition liberated the district on August 24, 2016. The town has large fields of oil, containing dozens of wells, some of which IS militants set on fire upon retreating from the town.

The military information cell on Thursday killed dozens of elements of the organization “Da’ash” terrorist and the destruction of car bombs and warehouse, air strikes carried out by Iraqi aircraft in Tal Afar and west of the district of Hadar and south of Tel Abtah.

“According to information from the Federal Intelligence and Investigations Agency, the air force hawks have directed several air strikes,” the military information cell said in a statement.

According to the statement, “the destruction of a large warehouse of weapons and light and heavy equipment and the demolition of tunnels under the warehouse completely, killing about 40-50 terrorists and wounded others where the terrorist gangs were seen to transfer their bodies rotten to the hospital in Tal Afar in Tal Afar.”

The statement also pointed to the “targeting of a group of gangs and terrorist gangs and the killing of dozens of them and the destruction of a number of wheels carrying weapons that were located inside a forest to the west of the urban district – desert region.”

A number of terrorists, including foreign nationals, were killed in an attack on our security forces south of Tal Ibtah, “the military information cell said in a statement.

The Ministry of Culture for Tourism and Antiquities Affairs Qais Hussein Rashid said that the ministry has succeeded in recovering 24 important artifacts, which had fled from Iraq in previous times and arrived for sale at a French auction.

The parliamentary culture and information committee demanded the Prime Minister, the Commander-in-Chief of the Armed Forces Haider al-Abadi, and all the security leaders and the popular crowd to preserve the antiquities in the province of Nineveh and to protect them against the thefts that are constantly being exposed to them.
Rashid added that the Paris Criminal Court had rejected Iraq’s request to restore its effects and issued its decision to refuse in 2013, but our insistence on the legitimate request of Iraq, and provide all the evidence and evidence proving Iraq’s right to it, and part of his legacy, which is looted and robbed because of war Terrorism has made the Court reconsider its decision to lead the restoration of these important effects to its home country. 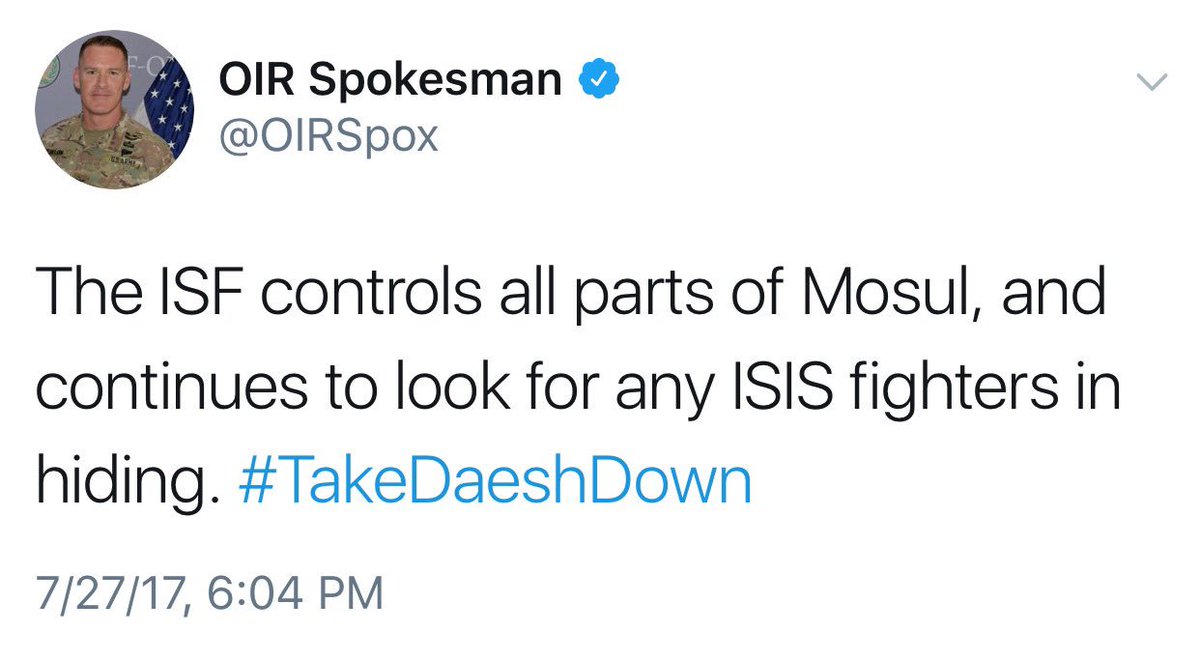 #US coalition: “No airstrikes in two weeks on #Mosul and no ISF killed since Tuesday first time since Mosul Operation was launched” 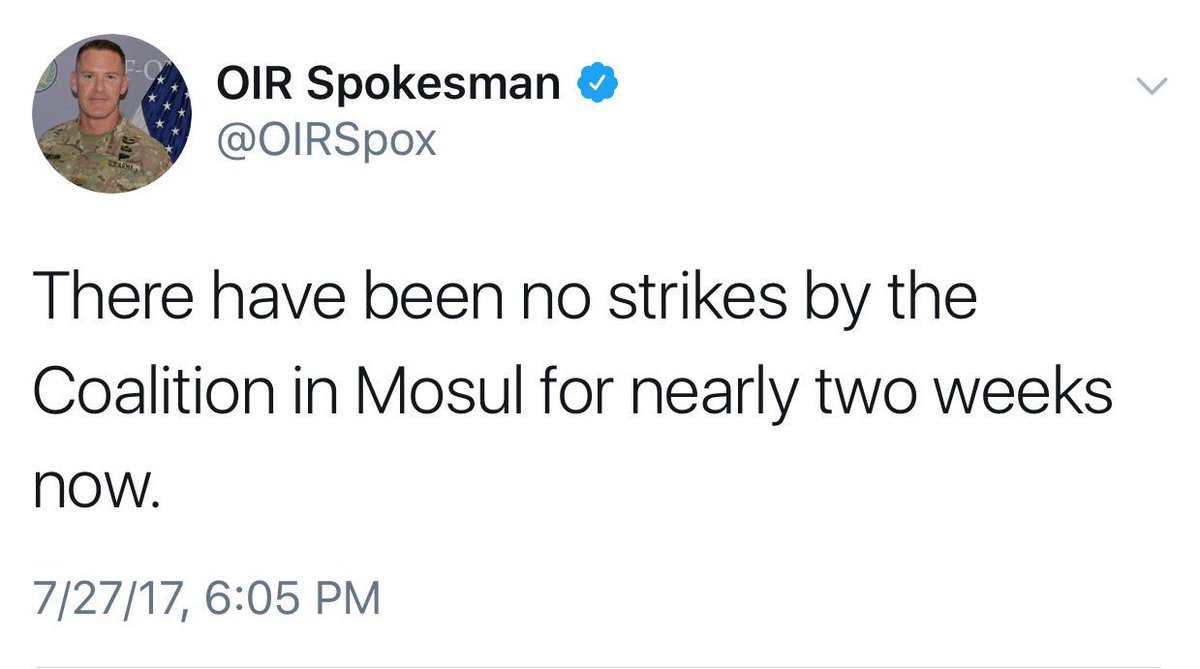 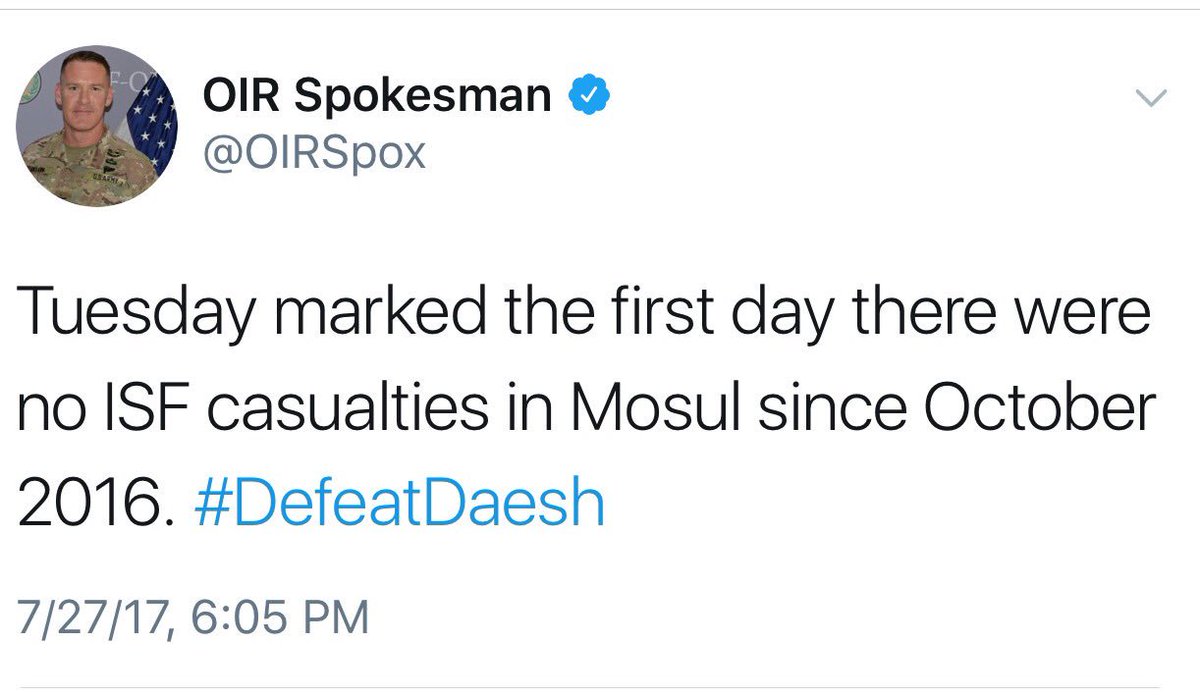 LTG Stephen Townsend, CG @CJTFOIR, sends this letter to the service members and their families who helped defeat #ISIS in #Mosul. 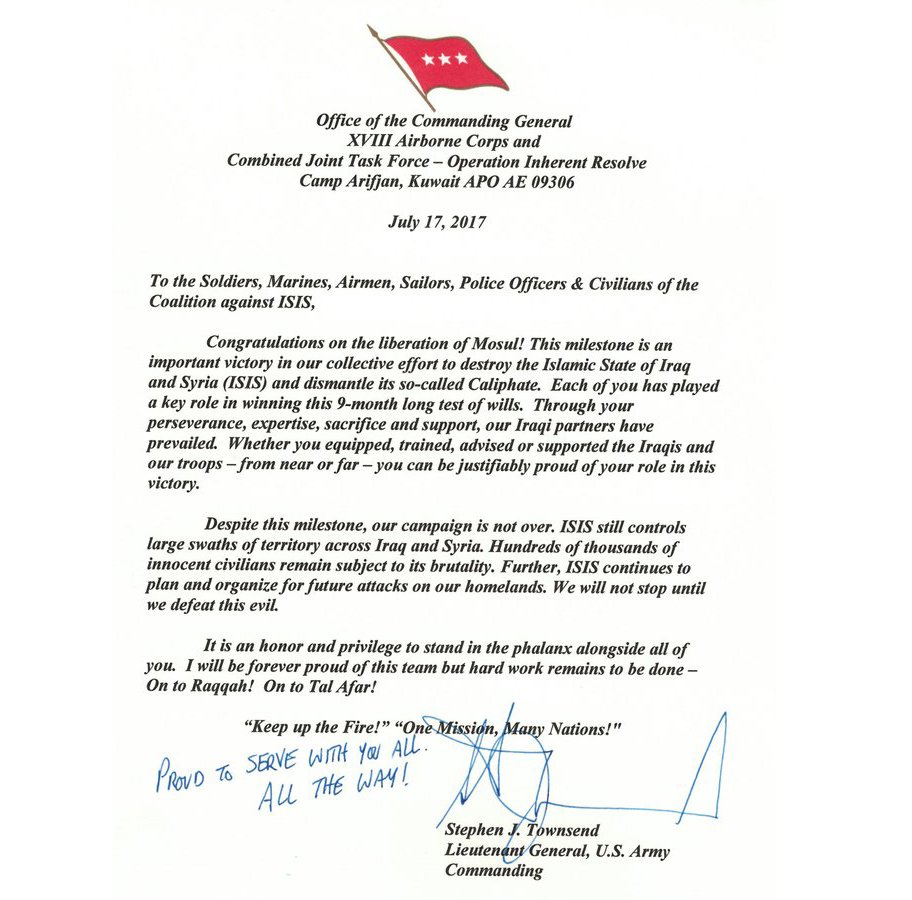