{Baghdad} Euphrates News announced that the Ministry of Youth and Sports, on Thursday, on Wednesday to determine the next date for the opening of the Maysan Olympic Stadium.
According to a ministry statement, received by the agency {Euphrates News}, a copy of it, that “next Wednesday , July 26 current, it will be a date for the opening of the Maysan Olympic Stadium promptly at eight in the evening , ” noting that ” the opening of the stadium will see the establishment of an official match between the teams of Maysan Oil and Zora competition within the Premier League football and preceded by a joyful celebration prepared by the ministry and the company Ishtar and an impressive program of technical presentations offered for the first time. ”
The statement pointed out that the ministry and its staff and the executing company ” is making great efforts for the completion of the business Alchtaibih in Maysan Olympic Stadium before the opening formally ended after the monument lighting towers and business track and field.”
And called on the ministry, the local government and the governor of Maysan Ali Douai, to “redoubled efforts over the next three days , and the completion of the work of cleaning and paving of roads and Almottaghrb surrounding the stadium with the aim of giving an aesthetic increase pitch elegance and beautiful.”
He noted that it “will be announced in the next two days for places selling tickets to attend the opening ceremony” .anthy
http://alforatnews.com/
Advertisement

{Baghdad: Euphrates News} confirmed Prime Minister Haider Abadi, a US general is determined to end the presence of terrorist gangs Daesh in Iraqi territory, and proceed with the liberalization of the remaining ones.
A statement by his office and Euphrates News Agency {} received a copy of it today that ” the Prime Minister and Commander of the Armed Forces Haider al – Abadi , received the US Central Command , General Joseph Votal.”
The Abadi ” is determined to end the presence of Daesh gangs terrorist in Iraqi territory, and to proceed by editing the remaining ones, and to protect and secure the border, and the trend to stabilize and re – displaced, while continuing to strengthen capabilities of Iraqi forces in the areas of armament and training.”
For his part , General Votal presented according to the statement , “congratulated the victory of the Iraqi forces and the liberation of Mosul, praising her courage to fight this battle , which he described Balnmozjah all military and humanitarian dimensions.”
He praised the “leadership of the Abadi operations liberation”, stressing that ” the United States continues to provide support to complete the liberation of the remaining Iraqi territory.” is over
http://alforatnews.com/modules/news/article.php?storyid=146770

LONDON (Reuters) – Brent crude rose above $ 50 a barrel for the first time since early June, boosting gains in the previous session as a drop in US crude and oil inventories pushed the market higher.

Brent crude oil futures were up 40 cents from the previous close to $ 50.10 a barrel, Reuters reported.

The crude was at their highest since June 7 after rising more than 1.5 percent in the previous session on a report showing US crude and fuel stocks fell last week.

According to data from the US Energy Information Administration, US crude inventories fell 4.7 million barrels over the week ending July 14, while analysts forecast a 3.2 million barrel drop.

5 hours ago
Last updated
The time now is 05:32 PM
BAGHDAD /
The central committee overseeing the popular protests in Iraq on Thursday postponed the demonstrations on July 21 to Friday to celebrate the victories of the security forces.
“In celebration of the victories of our security forces, and to confirm our stand and them in one trench, it was decided to postpone the demonstration on Friday 21 July 2017 to the next Friday,” the committee said in a statement received by Al-Ghad Press. Remove the last terrorist and corrupt from the pure land of Iraq. ” https://translate.googleusercontent.com/translate_c?depth=1&hl=en&prev=search&rurl=translate.google.com&sl=ar&sp=nmt4&u=https://www.alghadpress.com/&usg=ALkJrhhWZEhPDVNk-iobfubkuNoPPsWfOQ

The governor of the Central Bank, Ali al-Alak, expected on Thursday, the occurrence of economic movement throughout Iraq in the coming days after the liberation of security forces in the city of Mosul from the organization of Daed.
“Iraq is going to be able to attract foreign investments because of the stability of the security situation and increase the number of investment opportunities,” he said.
He added that “foreign investment will not be achieved only by the existence of an efficient banking sector able to absorb this role and interact with him and be a supporter and financier and facilitator of these operations,” explaining that “the central bank now is pushing banks to prepare for advanced roles until the development of its programs and systems so that you can Support investments in the country “.

Prime Minister confirms that Iraq won the sacrifices of the martyrs and the wounded and their families who are sacrificing the right to victory makers. 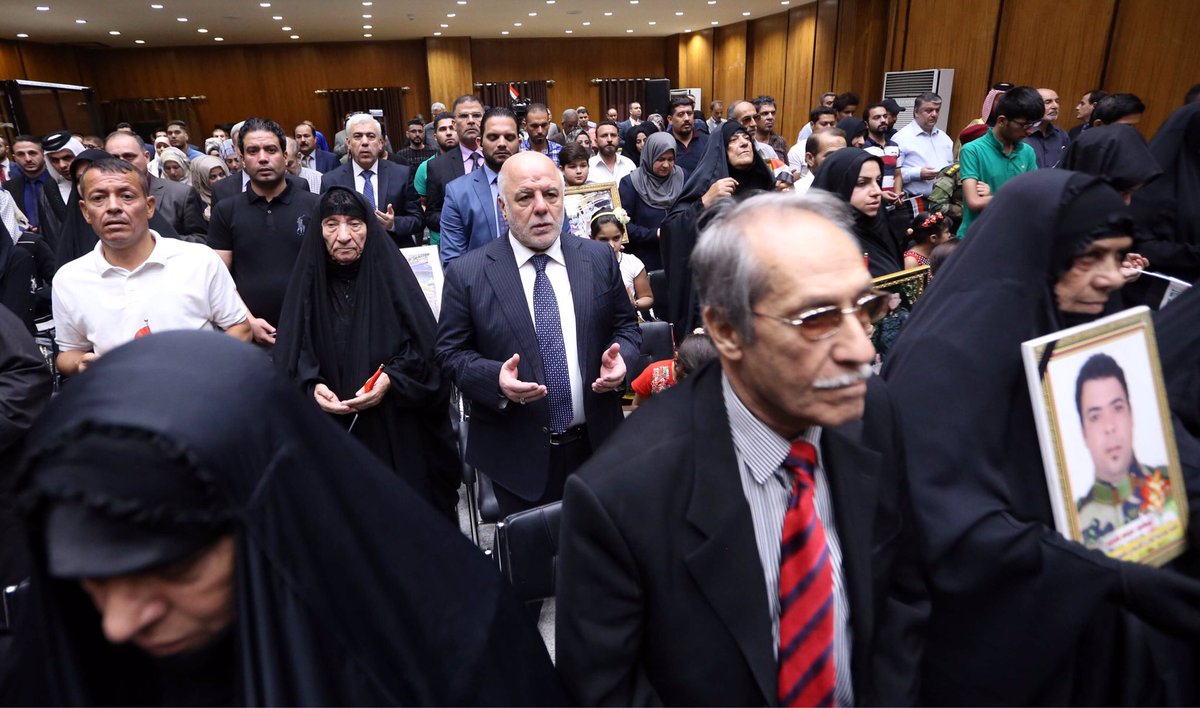 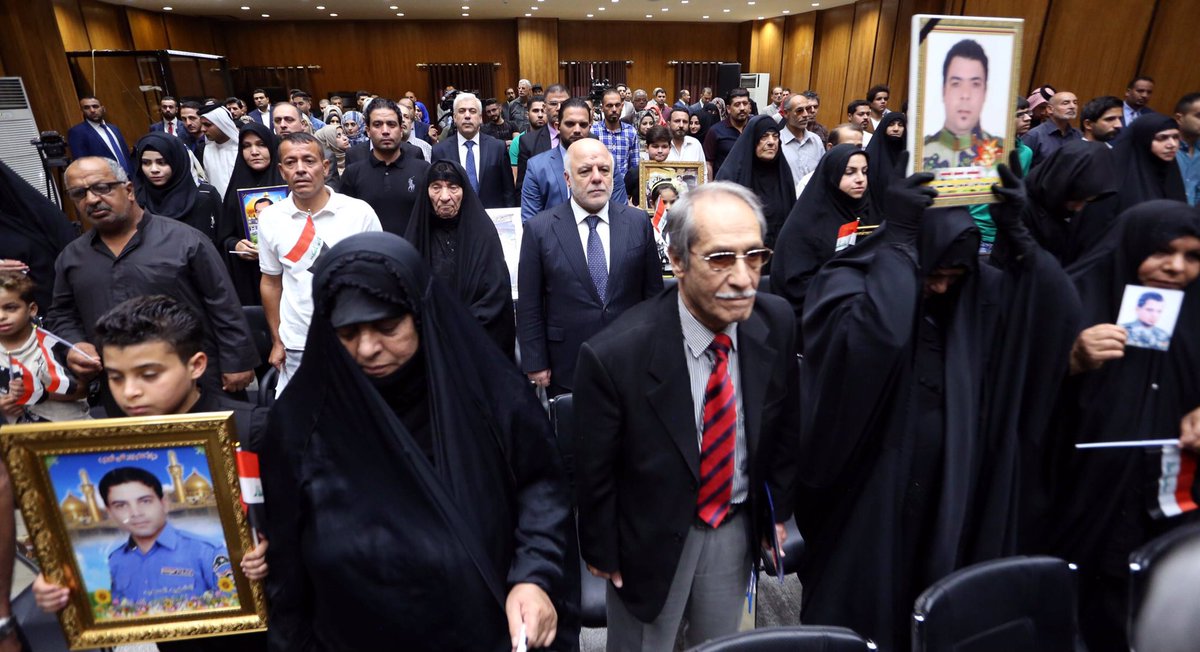 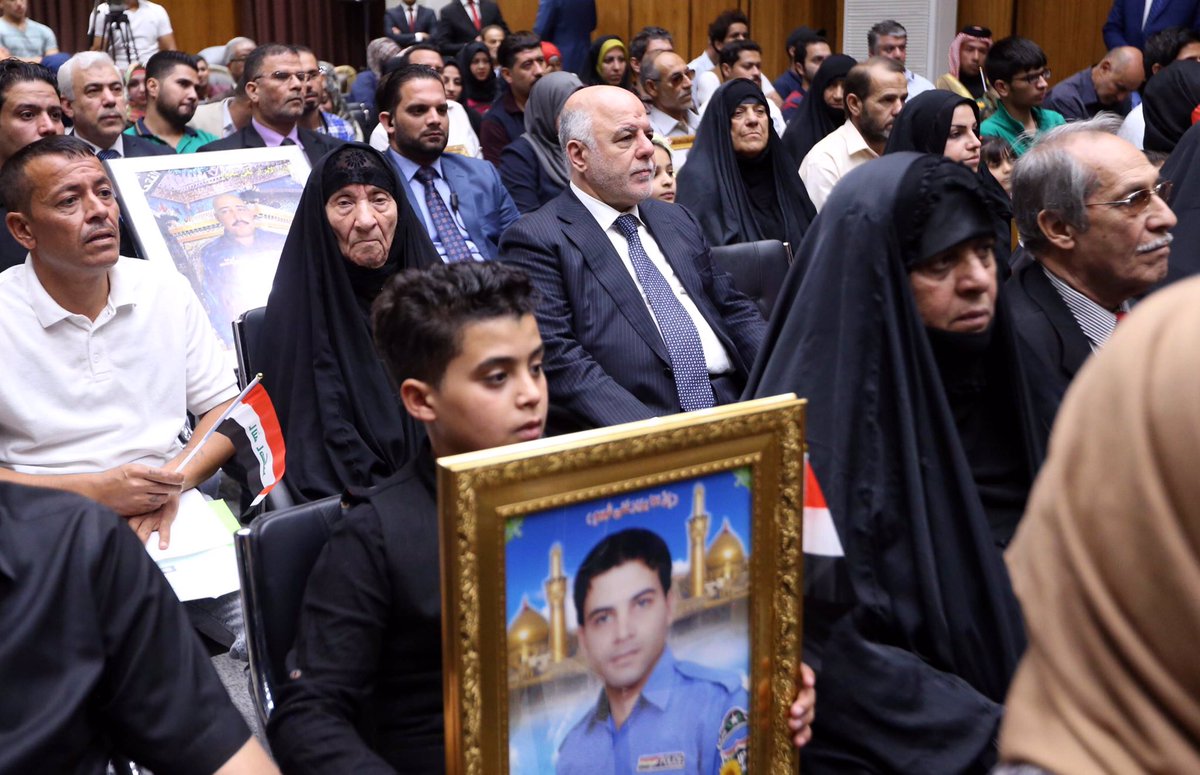 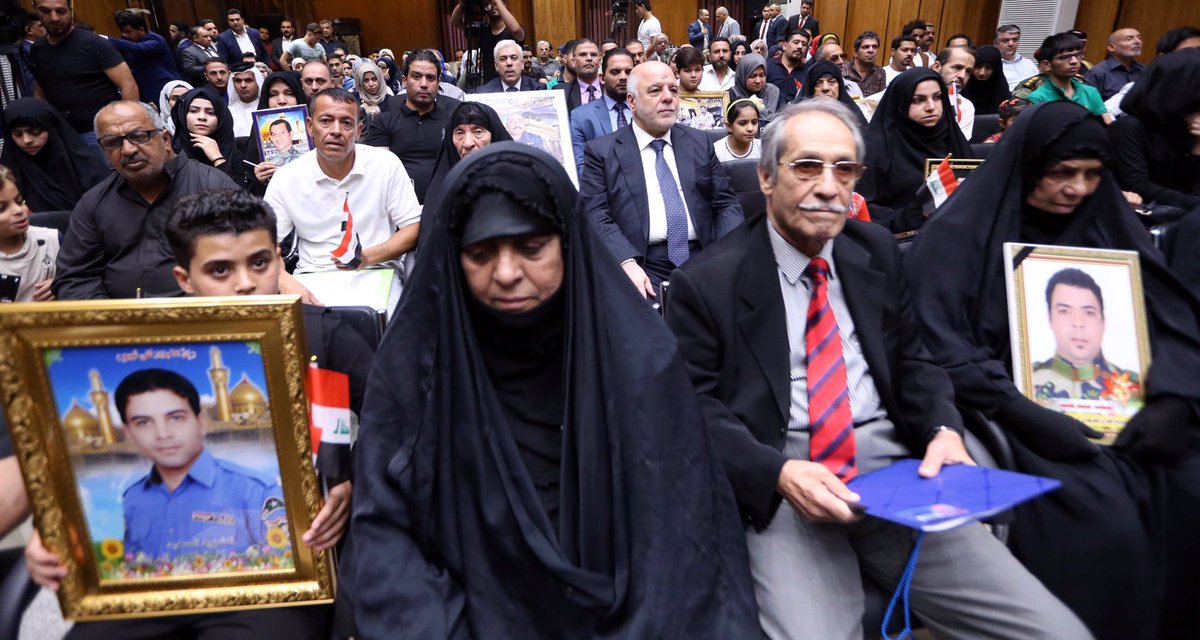 {Baghdad} Euphrates News announced that the Joint Operations Command, the death of 1429 civilians in the liberation of the city of Mosul Daesh terrorist gangs operation.
Denied joint operations in a statement the agency {Euphrates News received} acopy of the “cell media war and spokespeople continue to communicate information to the public opinion through Byantha statements relied on precision in transport, and in the midst of victories Iraq , which wowed the world we overlook reports we can not say it ‘s news because it did not convey information accurately for thenumber of civilian casualties during the liberation operations. ”
” It seems that those who wrote the reports overlooked facts in the fact that thebattles of liberation was delayed because of the preservation of innocent people and leaders stressed more than once that man edit before liberating the land.”
He confirmed the joint operations that “official statistics issued by the Civil Defense Directorate , a body responsible for the subject showed that the bodies that havebeen Anchalha during the liberation of Mosul operations amounted to 1429 Shahid and saved 102 citizens from the neighborhood were evacuated 200 families and this calls to stand in front of the allegations are incorrect do not know what it was based on whether the authors of these reports were in the battle with their own hands and prepare the preparation of the victims. ”
The statement noted that these parties “reported that the preparation of the victims in the liberation of the right side of the process of the connector amounted to 40 thousand people, and the reports did not mention that these victims despite the inaccuracy of the figures were among them fleeing from injustice Daesh and the fall of mortars on innocent people and using them as human shields, as well as for booby – trapping homes by criminal gangs, and the targeting of citizens also explosive belts and snipers have been the security forces and to provide health eviction support to them. ”
Joint Operations announced that “our units , killed more than 30 thousand terrorists Is counted dead terrorist gangs Daesh that they are civilian casualties?!. Ended” 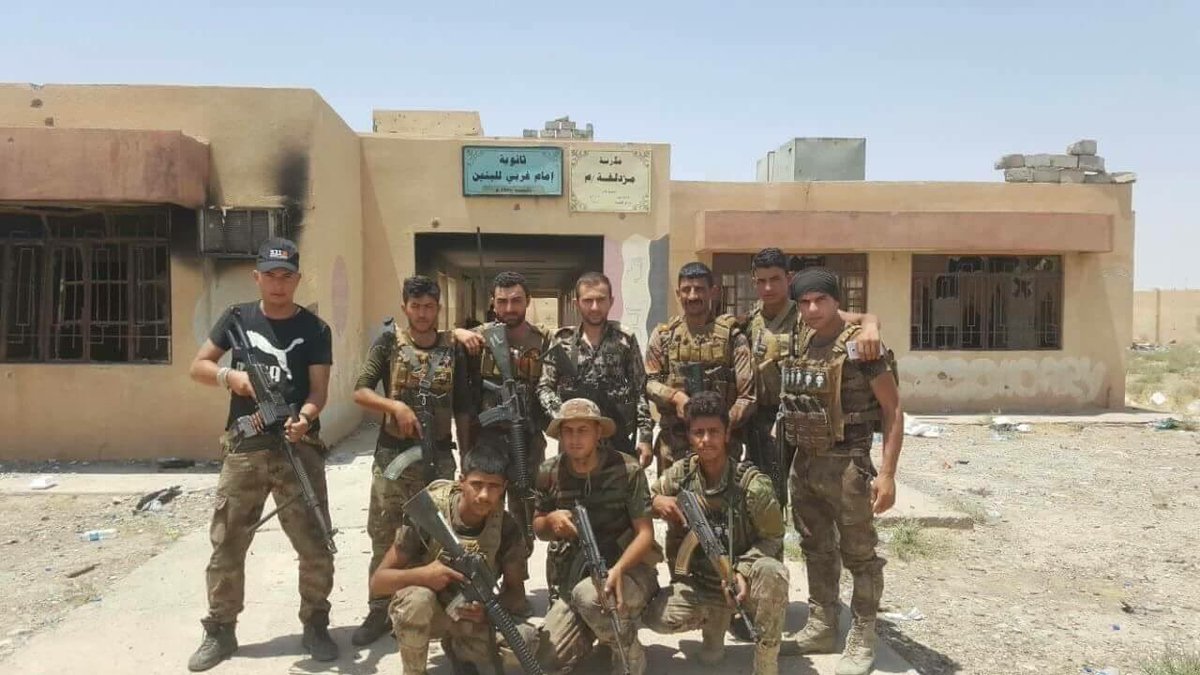 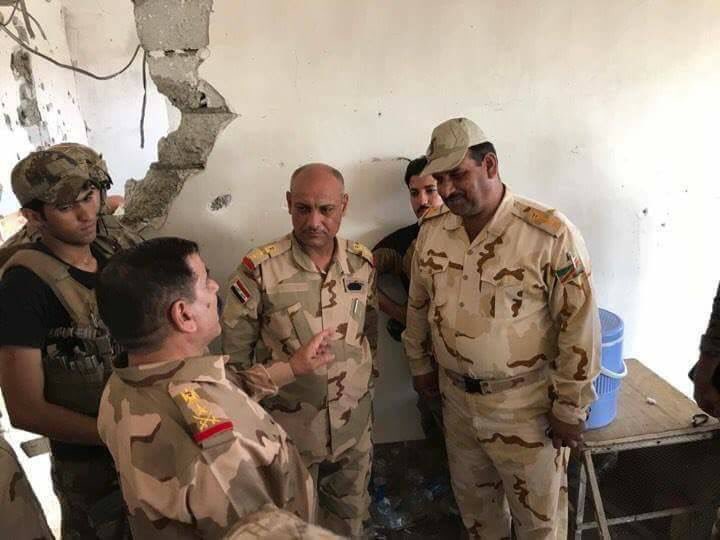