Security forces managed to liberate the village of Imam Gharbi, south of the city of Mosul, about two weeks after the control of an organization calling on them.

The commander of Nineveh operations Major General Najm Jubouri said that the Iraqi forces regained control of the entire village of Imam Gharbi of the organization of Dahesh, adding that about 40 elements of the Daqash were killed during the clashes inside the village and the release of dozens of families who were armed supporters have taken them hostage.

Troops from the anti-terrorism agency, Salah al-Din police and army forces took part in the attack, which began last night with the support of American helicopters, as the village of Imam al-Gharbi entered two axes and clashed with supporters.

According to a source in the Salahaddin Operations Command, US advisers were involved in supporting Iraqi forces as well as some small US artillery pieces.

Vote in the House of Representatives, on Thursday, the candidates and the law of freedom of expression and peaceful protest human rights commission, according to confirmed Thursday’s meeting agenda.

According to the Presidency of the Council on July 19, 2017 that “the agenda also includes a vote on the Council of State law and recommendations regarding the fulfillment of the martyrs and the wounded and vote on the wording of the resolution submitted by the MP Niazi architecture Ihsanoglu about the genocide of the areas of Tal Afar and Tuz and Taza Khurmatu.”

According to the agenda the meeting will also see the vote on the draft law and provincial council districts, counties and completed voting on the draft guests and depositors Bill and the Commercial Agency Law and other bills. ”

The House of Representatives held on Tuesday under the chairmanship of its Salim al-Jubouri, and the presence of 213 deputies, and the agenda of the meeting included a vote on a number of laws, including the refusal to vote on the assumption of Huda Abdul Malik Abdul Ghafoor al-Ani, to the post of Chairman of the Federal Service Council.

after Iraq has proved to the world enraptured images and values of the human and moral waiting to prove an economic victory over the construction and reconstruction during the next phase, and that the new role requires concerted efforts combined to support reconstruction, which should banks be the cornerstone in this matter and doing very well through their sophisticated technology.

These words were Governor of the Central Bank and the Association of Banks during the ceremony organized by the International Islamic Bank on the occasion of victory over the “Daesh” terrorist and the granting of a certificate of ISO International Bank , which is the financial success of our sector. Page task Central Bank Governor Dr. Ali Keywords said that Iraq has proved the finest images triumphs of the world and move human values before the weapon , and so was the pride in the battle that will retain its history, pointing out that the new role is to address the building and reconstruction and succeed in this page task. We cherish that Iraq has the power and energy that will enable the country to economic advancement, and in the financial sector , we note the progress and innovation, urging young people to be more distinctive and characterize their ability to capture sophisticated information, asking the banking sector to be the first among the country ‘s institutions in the use of advanced technology, and must speed in the use of technologies. Testimony ISO Keywords said that the celebration today comes an important step is obtaining the World Bank to the ISO certificate, especially it ‘s in a detailed important specialized organization of payments, especially the banks , their products did not come into contact only 10 percent of the people and has the potential to reach 90 percent , and here must build trust between the two sides, especially the large market and extensive and require the volume of work and achieve a broad benefit to both ends of the process. He pointed out that there is an imbalance in the work of the Association of Banks makes us feel dysfunctional, pointing out that the central did not intervene in this matter , but can return to the rules of procedure to correct it, noting that represents banks and presented by the Association is useful for the banking sector. Effective capacities of either Commissioner of the Islamic National Bank Suha Ulkipaia Director: She thanked the security forces maker victories in all its formations that handed the country the banner of victory and hope Iraq that developed a prosperous rival countries of the world, pointing to the importance to be for banks effective capacities for economic victory. She stressed the importance of adopting advanced systems in harmony and international practice and with the Iraqi Central Bank instructions, noting that the bank often make efforts in order to deliver the electronic payment card to the farthest point in Iraq , and now we have 20 centers, pointing out that the 27001 ISO obtained the Bank is a success along with the Iraqi victory, indicating that the ambition is moving towards getting the ISO 20000 , where human resources are given great attention to the development of the joints of the work. Capital in turn , head of the Iraqi private banks association Wadih Handal said that the victory over Allaghab came to stimulate the motivation for economic victories greater, pointing out that the evaluation of institutions globally seen human capital and we look at this Association it is of great importance. He stressed the importance of cooperation in the implementation of monetary policies and restore confidence in the banking sector and bring deposits , and most importantly the participation of banks in the reconstruction of the liberated areas, praising the initiative of the Central Bank to allocate 6 trillion dinars for development projects, as well as the great role in supporting the government during the war on the “Daesh” terrorist. He stressed that under the supervision of the Central Bank will be honored the families of martyrs in the World Day of Peace in appreciation for their sacrifices for Iraq and said that the experience of interest the ideal employee , who did not exceed 35 years is an important thing to develop work and encourage new blood and urge them to creativity and work to the fullest.

Reconstruction of Mosul’s right bank to start next week – Cabinet

Iraqi crisis management cell announced that reconstruction process will start in Mosul’s right bank of Nineveh governorate next week, a source at the cabinet said on Wednesday.

In press statements, the source added that the reconstruction will cover maintaining water sewers and replacing electricity generators that were damaged during the war against ISIS terrorist group.

In a recent report, the United Nations pointed out at the reduction of the money allocated daily for nutrition, health and other logistic sectors as well as maintenance by 40 percent, the source further said. The source added that 21 percent of the residents of Mosul’s left bank, nearby villages and the governorates of Erbil and Sulaymaniyah had left their homes during the war, adding that they are expected to return to their homes after establishing and repairing water, sewage, electricity projects in their cities and villages due to be finalized by the end of August.

The source also said that the reconstruction process will be held by Iraqi funds but the new generators have to be imported by donors.

According to UN and Human Right Watch reports, these areas were destroyed by the Iraqi governmental forces, IMIS and ISIS. The reports assert that most of the destruction was without any justification expect revenge from Sunni residents in which those who committed destruction should be held responsible and brought to justice.

BAGHDAD / Press tomorrow: the
joint forces announced on Wednesday, freeing the village in front of the south west of the city of Mosul , fully Daesh.
The transfer of a military source “Tomorrow Press,” declared 50 brigade in the popular crowd with the Iraqi Army Division 16 police and Salah al – Din edit village west front.

The source added that ” the said forces will clean and sweep the village of containers, after heavy losses inflicted Aldoaash during the restoration of the village battles.”
The security source said for “Tomorrow Press”, earlier on Wednesday that security forces took control on the edge of the river in the village of Imam west, south of Mosul.

Prime Minister Haider al – Abadi World Bank stressed the importance of speeding up the provision of job opportunities in Iraq.

A statement issued by his office received by all of Iraq [where] a copy of it, that Abadi received regional director of the World Bank , who congratulated his victories and the liberation of Mosul, stressing the readiness of the World Bank to help and support the Iraqi government ‘s efforts and plans for economic reform and the advancement of projects , reconstruction and development of Iraqi cities. ”

From for his part , al – Abadi stressed “the importance of cooperation with international efforts in support of Iraq, and accelerate the related job creation programs steps, and stimulate the economy, and the return of displaced people to their homes.” the

{Baghdad} Euphrates News World Bank official, announced the readiness of the bank to support the efforts of Iraq Reconstruction cities.
A statement by the prime minister and the agency {Euphrates News} received a copy of that “Prime Minister Haider al – Abadi received regional director of the World Bank, gave the latter congratulated Ebadi victories and the liberation of Mosul, stressing the readiness of the World Bank to help and support the Iraqi government ‘s efforts and plans for economic reform and the promotion of projects , reconstruction and development of cities Iraqi. ”
Abadi stressed “the importance of cooperation with international efforts in support of Iraq, and accelerate the related job creation program steps, and stimulate the economy, and the return of displaced persons to their homes, were also discussed ways of initiatives for stability and reconstruction coordination.”
The Iraqi government recently announced its need two billion dollars for the reconstruction of the city of Mosul after its liberation from Daesh terrorist gangs, and its attempt to secure them locally and stay away from foreign loans.
The Prime Minister said Haider al – Abadi, on 22 June that the cost of the destruction of infrastructure because of the war on terror gangs Daesh exceeded more than $ 100 billion.
Iraq plans to hold an international donors ‘ conference in Kuwait for the reconstruction of the cities Mahrrh.anthy
http://alforatnews.com/modules/news/article.php?storyid=146665 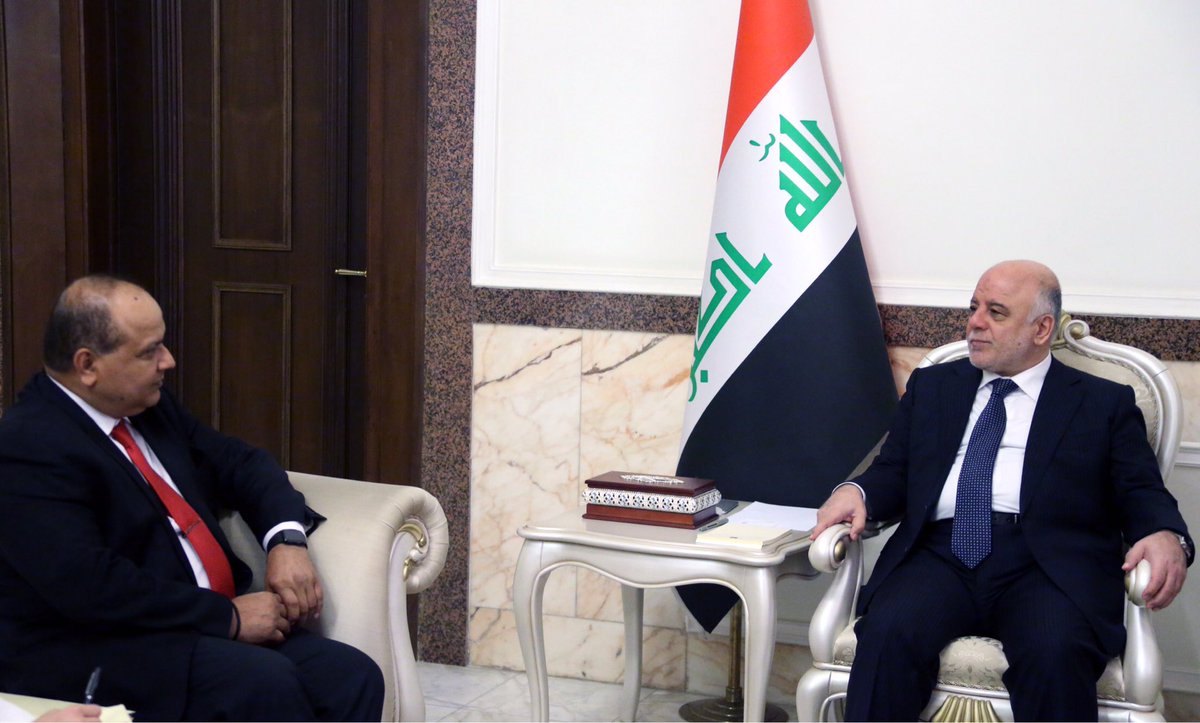 The International Islamic Bank, on Wednesday, receiving a global certificate for the security and confidentiality of information from SNR donor company for quality certification.