1 hour ago
Last updated
The time now is 12:45 AM
BAGHDAD /
Prime Minister Haider al-Abadi received a telephone call from the British prime minister on Tuesday evening, in which he asserted that the victory of the Iraqis was a great defeat and reduced his ability to recruit terrorists.
“The latter received a telephone call from British Prime Minister Teresa Mae and Teresa Mae congratulated the Iraqi victories, liberated Mosul and defeated the terrorist, praising the courage of the Iraqis and the bravery of their forces,” Ebadi’s office said in a statement received by al-Ghad Press .
“We support the unity of Iraq and accept anything that disturbs its unity and we are with a single, secure and stable Iraq for all Iraqis,” the British prime minister said. “Britain is seeking a resolution to criminalize it. Urging the United Nations. “
Al-Abbadi thanked the British prime minister and her country’s support for Iraq within the international coalition, stressing that “the victory of the Iraqis is a great defeat and reduced its ability to recruit terrorists, and that was done by the sacrifices of Iraqis and the cooperation of liberated urban people and their welcome to the Iraqi forces.” Operations and support the capabilities of Iraqi forces. “
https://translate.googleusercontent.com/translate_c?depth=1&hl=en&prev=search&rurl=translate.google.com&sl=ar&sp=nmt4&u=https://www.alghadpress.com/news/110067/Alghadpress&usg=ALkJrhipe31MHeuSwhMsyR6y8sroW61fWg

Prime Minister Dr. Haider Abadi, receives a phone call from the President of the British government Theresa May.

LONDON, July 18 (IFR) – The Republic of Iraq is expected to issue an international bond over the coming weeks, sources familiar with the matter said on Tuesday.

The new bond, expected to go up to US$1bn, will not be guaranteed by the United States Agency for International Development (USAID), which provided full faith and credit guarantee to Iraq‘s latest bond issuance last January.

Citigroup, Deutsche Bank and JP Morgan will lead the transaction, which could be announced as early as the end of the month.

Government representatives are expected to meet fixed income investors in London and the US ahead of the potential debt sale, said one of the sources.

Iraq’s prime minister said last November that the finance ministry planned to sell two bonds of US$1bn each, one of which would have been guaranteed by the US government.

Earlier this month, the prime minister’s website said the council of ministers decided to permit the issuance of foreign bonds and loans specific to the general Federal budget law for financial year 2017.

The fundraising is needed to plug the country’s budget deficit, caused by lower international oil prices.

Iraq’s latest bond issuance, which was unrated, had a five-year maturity.

Iraq also has US$2.7bn in outstanding bonds issued in 2006 and maturing in 2028. Those notes, with a 5.8% coupon, were yielding about 8% on Tuesday. (Reporting by Sudip Roy; Editing by Philip Wright)

A member of the Parliamentary Finance Committee MP Masood Haider, Tuesday, about the existence of a binding requirement for the government to pass the supplementary budget before the end of this month and included amounts of investment expenditure for the reconstruction of basic projects liberated areas, adding that the budget in the absence of completion specified period Vsiqta Fund Monetary and economic support for Iraq.

Haider said in an interview with Alsumaria’s News, he said that ” the Finance Committee represented by three deputies debated with the government on the supplementary budget, was during the discussions put the proportion of the 3% deducted from the salaries of employees to support the popular crowd and displaced people , ” noting that ” the government ‘s view was that the figure represented revenues are present and cancel all the budget would upset. ”
He added Haidar, said that ” the Commission has embarked on a discussion of the draft and there will be modified and the decision of it and then be the final decision of the House of Representatives during the vote session , ” pointing out that ” the amendment included increasing the budget in the amount of seven trillion dinars , of which has been allocated 3 trillion for the expenses of the investment.”

He said, ” The budget deficit of the Federal fiscal year 2017 were 21 trillion dinars , but now and in the supplementary budget would be after raising the price of a barrel of oil to $ 44.4 Maisawi 25 trillion dinars as representing approximately 18% , ” adding that ” the supplementary budget came at the request of the Fund international Monetary and , if not completed and voted on before the end of this month, the IMF will stop supporting Iraq . ”

He said Haider, “One of the conditions of the World Bank in the supplementary budget that is allocated increase expenditure investment for the reconstruction of basic projects in the liberated areas , stations of water, electricity, sanitation, hospitals, schools and desalination to provide an appropriate atmosphere to encourage displaced families in order to return to their regions , ” explaining that ” the amount allocated in the supplementary budget for the reconstruction of the liberated areas is three trillion and 300 billion dinars. ”

He was a member of the Legal Committee of the Parliamentary Secretary Bakerrevealed on Saturday (July 8 2017), details of the draft law amending the budget for fiscal year 2017 law, noting that the price of a barrel of oil within the adjustment of $ 44.4, with total oil exports , the rate of three million and 750 thousand barrels per day of including 250 thousand barrels of the Kurdistan region.

[Oan- Baghdad]
Prime Minister Haider al – Abadi warned terrorist gangs trying Daesh, to launch attacks against the backdrop of its defeat in the liberated city of Mosul.
A statement issued by his office received by all of Iraq [where] a copy of the “Council of Ministers held its regular meeting on Tuesday under the chairmanship of Prime Minister Haider al – Abadi, who renewed during the meeting congratulated the Iraqi people constantly victories and preparations for the Liberation of Tal Afar and the rest of the regions, calling for the criminalization of sectarian and racist discourse and hate speech “.
Presented Abadi , “presided over the meeting briefed on the developments in the last three days leading up to the resolution of the battle in Mosul and large losses in the ranks Aldoaash,” he said . “Daesh terrorist received a violent blow in Mosul led to the case of refraction of myself among its ranks against the strength and determination of our troops, calling for attention and vigilance to thwart any attempt a terrorist attack to prove the existence “.
The Council of Ministers agreed during its meeting today , ” a proposed bill to criminalize sectarian and racial incitement and hate speech in order to save the unity and integrity of our people and the coexistence of everyone.”
The Council also discussed the “Mosul Dam contract signed with the Trevi Italian company.”
The statement noted that “In the framework of the development of Iraqi – Saudi relations were discussed and approved the identification and ownership of sites of Iraqi embassies, Saudi Arabia, according to the principle of reciprocity.”
The Cabinet approved the “Iraqi General Company for Cement exception of the implementation of the instructions of the federal budget for the continuation of the work of the company ‘s plants located within the aforementioned provinces [Nineveh and Anbar].”
The Cabinet also face ” to introduction of functional degrees of Mnspin and contractors from non – political prisoners.”
The Council discussed ” the issue of protection of Iraqi antiquities and the need to move them to adjust the getaway and restore / also agreed to amend the draft disengagement reform events from the Ministry of Labor and Social Affairs and the Department of Justice attached to the Ministry of Law , according to the proposal of the Ministry of Labor.”
He also agreed “on the project to meet the ideals pay for state – owned land disposed of law for non – agricultural purposes.”
http://www.alliraqnews.com/modules/news/article.php?storyid=63989

Cabinet approves a proposed bill to criminalize sectarian and racial incitement and hate speech in order to save the unity and integrity of our people and coexistence among all. 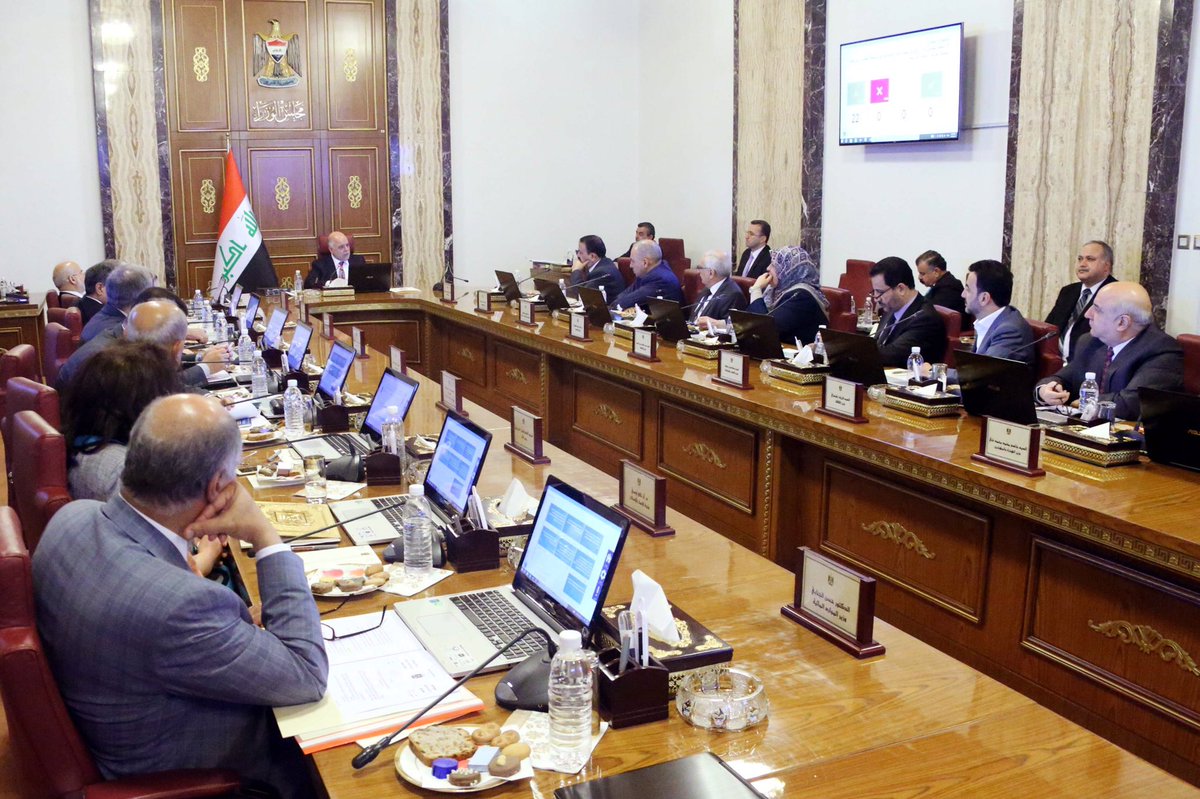 Twilight News Prime Minister Haider al-Abadi / on Tuesday rejected a UN report on the Iraqi government to impose collective punishment on the families of Dhuoha it belongs to the organization Daesh.

Ebadi said in the weekly conference held today after meeting his ministers, he said that “collective punishment has no place among us”, calling on international organizations to verify the release of their information about Iraq.

The Abadi said the support of the Iraqi government to rally popular pro-Iraqi forces with a Shiite majority and to increase financial budget from the state treasury, support way by saying, “We will not allow the theft of the efforts of the fighters and exploitation of political parties will not allow those parties that financed their election campaigns dedicated to the fighters of money.”

Financial and geographical issues will be discussed

ERBIL — A senior Kurdistan Region delegation will soon be formed for talks with Baghdad over a range of topics, including the forthcoming referendum on Kurdistan’s secession from Iraq and other outstanding issues between the sides.

Ashwaq Jaf, a Kurdish member of the Iraqi parliament, told BasNews a senior delegation would be formed in the near future for negotiations with Baghdad about the September vote on independence and a number of issues including financial, geographical and border issues.

Kurdistan Region has planned to hold a plebiscite on independence on September 25th of this year.