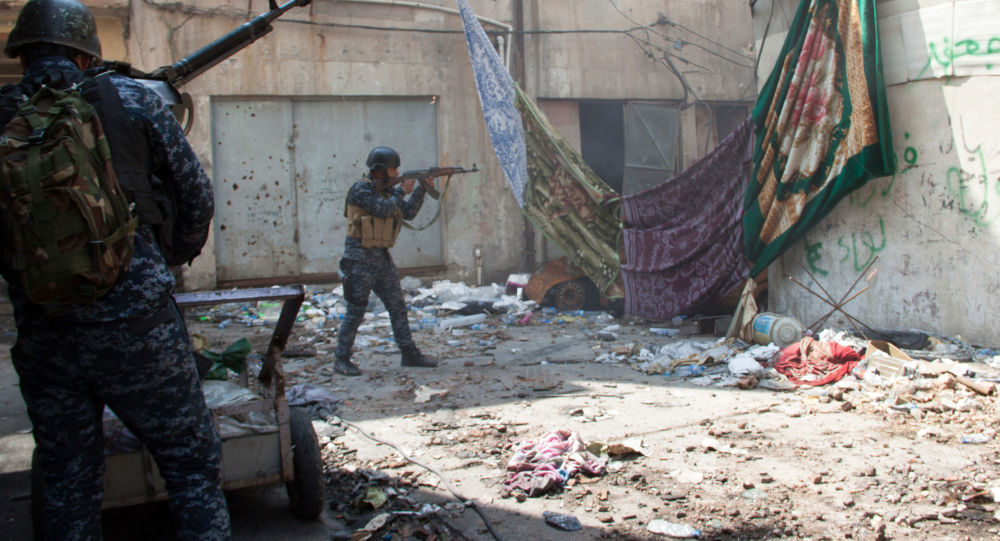 Iraqi Police Chief Major-General Raed Shaker Jawdat said his forces were continuing to clean up and inspect the remaining areas of the Old City to eliminate terrorist elements. 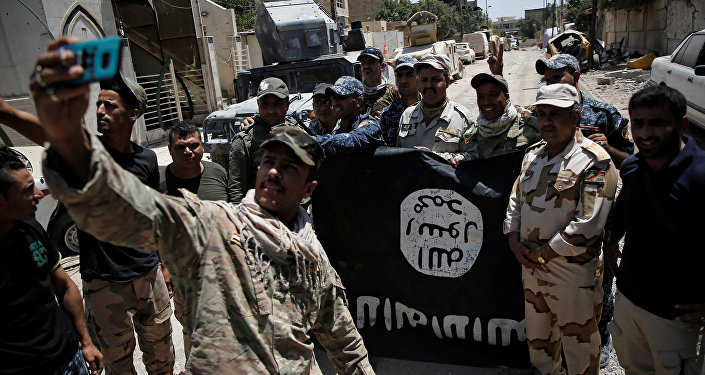 © REUTERS / ALKIS KONSTANTINIDIS
Saadi: We are separated from the liberation of Mosul 100 meters

In a statement, the leadership of the federal police forces continues to “cleanse the remaining areas of the old city to eliminate the terrorist elements and their hidden hideouts in the tunnels and invest the victory achieved by the pieces of the Federal Police Command” by teams 3, 5 and 6 of the Federal Police, With the support of tanks, planes and artillery, and only a few spaces and a few hours and Sanzf human beings to liberate the city of Mosul by the heroes of Iraq, the heroes of the federal police spare.
He also mentioned the killing of 74 terrorists and the discovery of missiles and weapons.
Iraqi forces continue their operations to liberate Mosul, where the commander-in-chief of the armed forces, Iraqi Prime Minister Haider Abadi announced on 19 February, “the liberation of the right coast of the city of Mosul (western part),” Last January of liberating the left side of the grip of the militants of the organization “calling” the terrorist.
https://translate.googleusercontent.com/translate_c?depth=1&hl=en&prev=search&rurl=translate.google.com&sl=ar&sp=nmt4&u=http://www.faceiraq.net/inews.php%3Fid%3D5721278&usg=ALkJrhjLoE6bxz8fqpfAtUmgGG02M-emLQ
Advertisement

MOSUL — All streets in the northern Iraqi city of Mosul have been cleared of Islamic State (IS) militants, a reliable source inside the city said on Friday.

According to the source, the Iraqi Federal Police together with the army are preparing themselves for a victory parade in Mosul, as the Prime Minister of Iraq, Haider al-Abadi, is about to declare the complete liberation of the city.

Military commanders said earlier on Friday that they expect the Iraqi PM’s statement on end of the operation of Mosul to be read in the upcoming hours.

The Iraqi forces recaptured the Grand al-Nuri Mosque in Mosul’s Old City, which marked the defeat of IS in the city.

{Baghdad: Euphrates News} continued to residents of the province of Diyala celebrations and for the third consecutive day to mark the victories achieved in the liberation of the right side areas of the city of Mosul.
And it swept the streets and wedding markets and raise the scientific and popular Iraq Revelers crowd praising the sacrifices made by the fighters to defend the land and holy sites in various Madn.anthy 16

The leadership of the federal police forces announced on Friday 7/7-2017 the liberation of its axes in the city of Mosul entirely from the control of the organization “Islamic State”.

Federal police chief, Raed Shaker Jawdat, said that “the Federal Police Ashaos and Gari Rapid Response have completed the liberation of their axes in full.”

He added that “the pieces of the federal police completed the task and continue to pursue sleeper cells and the remnants of hiding hiding and remove their violations from the Najafi area.”

He pointed out in a speech during the celebration that “victory can forget all our wounds is a balm for all the wounded heroes and the families of martyrs and Iraqis, and victory must be taken strongly, it is not achieved easily, but requires sacrifices and you gave the bloodiest.”

Iraqi forces are close to restoring the last stronghold of the old town of Mosul on the western side of Mosul, where it has captured more than three-quarters of the 2,000-square-meter old city.

Amid US Concern: Tillerson is to visit Kuwait over Gulf crisis

Underscoring US concerns about a crisis involving key allies in the Middle East, the department said Secretary of State Rex Tillerson plans to visit Kuwait, which is mediating in the dispute, on Monday, Time Magazine reported Friday.

“We’ve become increasingly concerned that that dispute is at an impasse at this point. We believe that this could potentially drag on for weeks. It could drag on for months. It could possibly even intensify,” she said.

In the latest top-level US contact with officials of the countries involved in the dispute, Defense Secretary Jim Mattis discussed the importance of easing tensions in a phone call with Qatari Minister of State for Defense Affairs Khalid al-Attiyah on Thursday.

Saudi Arabia, the United Arab Emirates, Egypt, and Bahrain broke diplomatic relations with Qatar last month and launched a drive to boycott the gas-producing state, which they accuse of supporting terrorism and allying with regional foe Iran.

{Baghdad: Euphrates News} Federal police forces completed, its mission in the liberation of the areas entrusted to it in the right side of the city of Mosul.
A statement by the leadership of the Federal Police Agency {Euphrates News}, a copy of it, that “received pieces of federal police completed the task, and continue to prosecute the sleeper cells and the remnants of Daesh hiding and remove their waste from the area of al – Najafi.”
And threw the federal police team leader Raed Shakir Jawdat speech in front of a crowd of fighters alive in which the word Mounash forces to achieve victory and complete their tasks and thanked the families of the martyrs and the wounded and called for the need to maintain Almndzat.anthy
http://alforatnews.com/modules/news/article.php?storyid=145942

[Oan- follow – up]
Associated Press , the US announced that the United States and Russia are preparing to announce a ceasefire in southern Syria from the beginning of next Sunday.
The Donald Trump and Russian President Vladimir Putin met today on the sidelines of the top twenty in the city of Hamburg in Germany , in which several files for research , notably strained bilateral relations between the two countries and ways to consolidate as well as the Syrian crisis and North Korea ‘s weapons file.
Trump said that he made meh Putin “very very good talks, and will continue stressing dialogues.”
http://www.alliraqnews.com/modules/news/article.php?storyid=63631

{Karbala: Euphrates News} called on the supreme religious authority, fighters in the war against terrorist gangs Daesh in another dens in Mosul, to stability and accelerate Banasr..itba
http://alforatnews.com/modules/news/article.php?storyid=145917

On Friday, July 7, 2017, demonstrations were held in Tahrir square in central Baghdad, under the slogan “Friday of Victory” to support the armed forces involved in the process of restoring Mosul from the organization of the “Islamic State”.

“As the signs of victory loom over us, and we are given his sincere prophecies, we are filled with the pride and pride that an army like our army is protecting itself from fever,” said the central committee overseeing the popular protests in Iraq. “We really had to celebrate what they were winning. After another .. To be gathered this Friday (Victory) for us to the martyrs of our army and our security forces and their wounds, and other heroes.

The statement added: “We will not only be celebrating, as they have determined themselves to meet our security and dignity, we from the Liberation Square and their blood Zaki divided to go forward in the fight against the causes of corruption, even the achievement of just demands that ensure Iraq’s national national fatherhood independent and secure the love of the homeland and the service of human. The desired change is the removal of the commission of misery, and the law of the most desperate, neutral and unfair elections … and replacing them with faces from Iraq and Iraq, and a just law from the very point of our need and our stage. “

The statement continued: “Fahmoa O Sons of Iraq in the collection of this seventh of July 2017 to Tahrir Square at 5:30 pm, and the other provinces beloved every in his yard, to make it one day to honor our armed forces and the blessing of victory.”

It is scheduled to read a statement by the leader of the Sadrist movement Moqtada al-Sadr on the service project, in Tahrir Square in Baghdad.

Said the fight against terrorism, a commander on Friday that his forces on the verge of resolving the battle field in the neighborhood last strongholds Daesh inside the Old City Ayman Mosul, pointing out that a few meters separating them from reaching the banks of the Tigris.

Lt. Gen. Abdul-Wahab al-Saadi said in a press interview that “the fight against terrorism continues to provide a central neighborhood of the field inside the old town and troops battling against the remaining terrorists Daesh and Atvsalna for access to the banks of the Tigris just a few meters.”

Saadi added, “More than 50 Daashaa killed at least in the area of ​​the field and is the largest section of the terrorists organization trapped in it.”

Saadi pointed to, that “anti-terrorism forces progressing slowly and warned to avoid inflict casualties on civilians who are trapped Atakzhm Arhabiyoa Daesh as human shields in the remaining narrow space of the neighborhood.”