•Backed against river, pockets of IS being squeezed on all sides by ISF

Kuwaiti Emir Sheikh Sabah al-Ahmad congratulated on Thursday Iraqi government and people for the success of the Iraqi forces to recapture Mosul from ISIS terror group.

The Emir of Kuwait sent two congratulatory messages to Iraqi President Fouad Massoum and Prime Minister Haidar Abadi expressing his sincere congratulations to them and to the government and the people of Iraq on the success of the armed and security forces in retaking Mosul.

He stressed Kuwait’s firm stance in rejecting terrorism in all its forms, solidarity with the international community to combat it and support for the Republic of Iraq in all measures taken to confront terrorist acts aimed at destabilizing its security and stability.

{International: Euphrates News} a senior official at the White House said on Thursday that President Donald Trump will meet with his Russian counterpart Vladimir Putin on the sidelines of the G20 summit in Germany next week.
He said national security adviser to the White House {Ach.or. } Told reporters McMaster that he had not yet been determined for the meeting , which will be the first meeting between the two presidents agenda.
” The president will meet in Hamburg , many of the leaders.”
Any meeting between Putin and Trump did not happen since the inauguration of the last president of the United States in January.
The US Secretary of State Rex Tillerson discussed with his Russian counterpart , Sergei Lavrov, in a telephone call the need to strengthen the cease-fire in Syria, in the framework of the peace talks hosted by the capital Kzakstan.anthy
http://alforatnews.com/modules/news/article.php?storyid=145504

The leader of the organization of Abu Bakr al-Baghdadi

An official close to Supreme Leader Ayatollah Ali Khamenei was quoted by the official IRNA news agency as saying on Thursday that it was certain that the leader of the Daqash organization Abu Bakr al-Baghdadi had died .

“The Baghdadi terrorist must have died, ” Ali Shirazi, representative of the top leader of the Quds Force, told the agency without elaborating 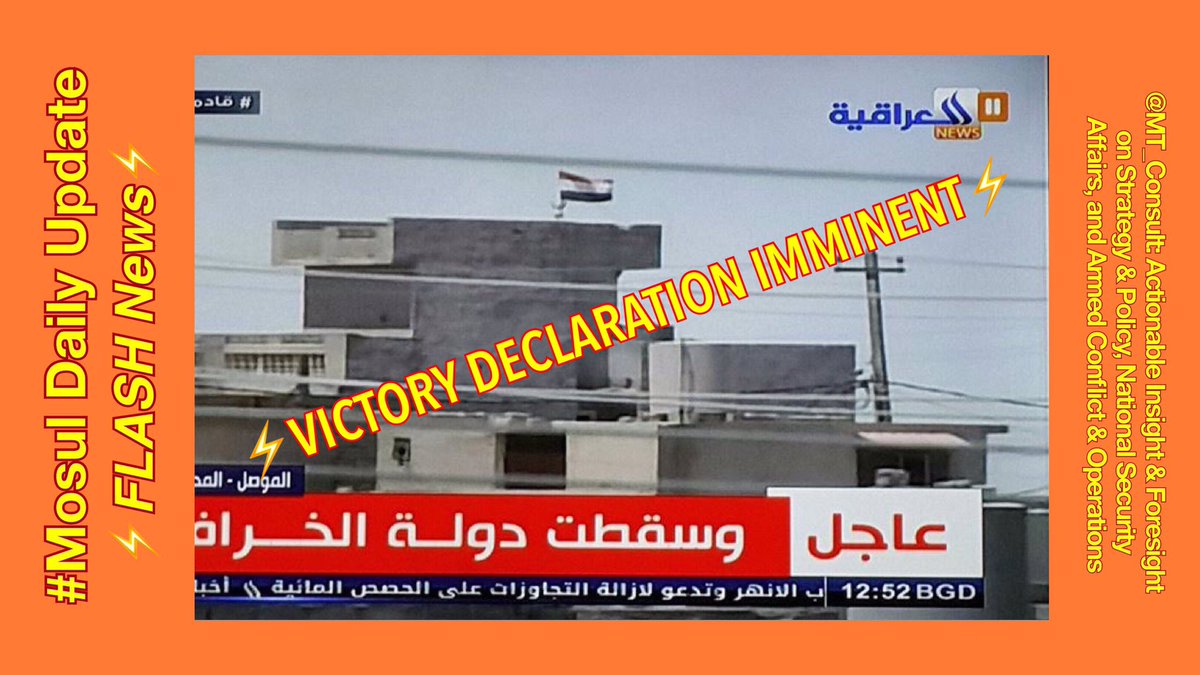 MOSUL — After the Iraqi security forces recaptured the symbolic building of Grand Mosque – where the Islamic State (IS) first declared the caliphate, the Iraqi official TV channel, al-Iraqiyah, announced the end of the organization in the city.

The Iraqi second largest city fell to the IS militants due to the collapse of the Iraqi army in the city during the former Iraqi PM Nouri al-Maliki’s reign. Observers and many Iraqi officials believe that Maliki’s sectarian-based policy led to the collapse of the northern Iraqi provinces in the wake of IS organisation’s attack.

After nearly eight months into the battle to retake the city, the Iraqi forces are close to declare the liberation of the entire city from IS. The Iraqi forces announced today the seizure of the Grand Nuri Mosque in the centre of the Old City district, the last IS-held area in Mosul.

Abu Bakir al-Baghdadi proclaimed his self-styled caliphate in June 2014 in the mosque.

The IS militants last week bombed the Hadba ancient minaret adjoining the Grand Mosque, causing extensive damage to the mosque.

The operation to liberate Mosul was launched by the Iraqi and Peshmerga forces, backed by US-led coalition air support, on October 17, 2016. The eastern half of the city was declared free in January 2017, and the forces moved onto liberating the western part of the city in February 19, 2017.

Iraqi Prime Minister Haidar al-Abadi said on Thursday that Iraqi forces had regained control of the historic Nuri Mosque in Mosul, where the leader of the organization “Da’ash” Abu Bakr al-Baghdadi gave a speech to the so-called “Caliphate State” in 2014 .

Abadi said, through his account on the site “Twitter”, that “the bombing of the Al-Nouri Mosque and the humpback of the humpback and return it today to the homeland announcement of the end of the state of false da’is.”He added: “We will continue to pursue the rapprochement between killing and capturing until the last call in Iraq.”

“The battle is still difficult,” said Ryan Dillon, spokesman for the US-led international coalition against the Da’ash organization. Dillon confirmed that Iraqi forces had regained control of the Nuri Mosque, adding that “the liberation of Mosul is imminent.” 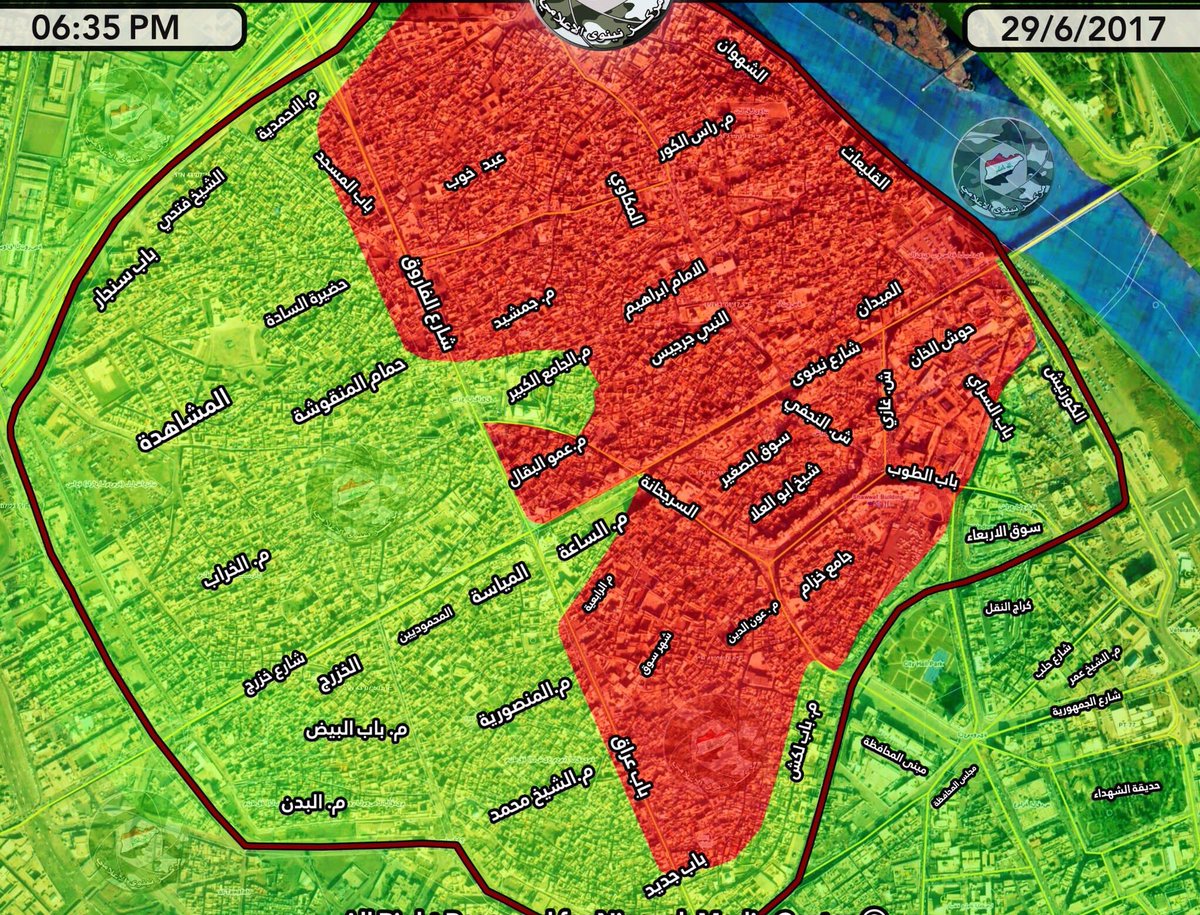 {Baghdad: Euphrates News} confirmed the Iraqi Anti-terrorism, Abdul-Ghani al-Asadi commander, said Thursday that the troops advancing towards the remaining areas under the control of Daesh terrorist gangs in the city of Mosul as planned ongoing operations, pointing out that the fight against terrorism forces surpassed Al-Nouri mosque and a lighthouse humpback.
Asadi said, in a press statement that “terrorists are fighting fiercely Daesh in the old Mosul, but they were unable to obstruct the progress of the Iraqi forces.”
And on the number of dead Daesh in the liberation of Al – Nouri mosque operation area and a beacon of humpback, anti – terrorism chief said, ” The forces involved in the operation killed more than 600 armed Daesh.”
It is noteworthy that the Iraqi prime minister, Haider al – Abadi, had confirmed on Thursday that the re – Nouri mosque and a beacon of humpback to the bosom of the homeland declaration of the end of the mini – state of falsehood Aldaashah.
The Ministry of Defense announced on Thursday that the presence of Daesh in the city of Mosul has ended, after the restoration of security forces to control the big Nouri mosque in the old city of Mosul.
According to a brief statement of the ministry that “Daesh has not left him any controlled area in Mosul , as there is a complete breakdown in its ranks, and the security forces in front of her little to declare Mosul free Daesh” .anthy
http://alforatnews.com/modules/news/article.php?storyid=145489