BAGHDAD (Reuters) – Iraqi forces on Monday resumed searches in western neighborhoods of the city of Mosul, which they restored weeks ago, after a surprise attack by an armed group on Sunday night, signaling the difficulty of the ongoing battle to restore the country’s second largest city. The attack, which was carried out by an al-Qaeda organization, raised panic among residents who returned to the Yarmouk and al-Tank neighborhoods of western Mosul. “The group came out with the displaced and settled in al-Tanak district,” said the head of the counter-terrorism forces, Major General Abdulwahab al-Saadi. They re-assembled and launched counter-attacks. “
“After the exposure last night (Sunday), our troops arrived at the scene and repelled the attack. Now there is nothing left, only two groups surrounded, and Yarmouk is searched from house to house. We will conduct inspections on the entire right side (west of Mosul). “ A medical source in the anti-terrorism forces said that the attack resulted in the fall of “martyrs killed by the call.”
He pointed out that between 15 to 20 elements of the organization of the Islamic state were killed during clashes with security forces. The attempt comes as Iraqi forces continue their military operations deep into the historic and devastated Old City of Mosul, and the last of the organization’s sites has been tightened eight months after the start of the largest military operation in the country.
The forces returned east of Mosul last January, and launched a month after the restoration of the western part of the city. Hundreds of al-Qaeda members have been killed since the operation began, and hundreds of civilians have been killed. More than 800,000 people have been forced to flee their homes, and many remain in overcrowded camps.
While the details of the counter-attack were not yet clear, Sunday’s attack was described as a tactical move initiated by “sleeper cells” in western Mosul to relieve pressure from the old town, where the radical group defended its last positions. “The sleeper cells launched a surprise attack against the security forces in an attempt to unplug the elements in the old city,” a local official said on condition of anonymity. He pointed out that «cleansing operations are underway on the pockets of the remaining Daash».
An Iraqi military commander said the battle to regain full control of the city of Mosul from a sympathetic organization would end within days and that the attempt to resist militants failed. “There is only a little left of the city, specifically the old city,” said Abdul Ghani al-Asadi, commander of the anti-terrorism apparatus in Mosul.
“In terms of military assessment, he is over. The spirit of fighting has lost its balance and we are calling them to give up or go to death. “ The Iraqi army says the area, still under Daed’s control in Mosul, the organization’s stronghold in Iraq, is less than two square kilometers. Al-Asadi said the organizers’ attempt late on Sunday to return to the neighborhoods outside the old city had failed, adding that the city would be restored within a few days.
The anti-terrorism apparatus is leading the battle in the narrow, densely packed alleys of the ancient city on the west bank of the Tigris River.

Former CIA director David Petraeus said the Kurds have the right to their own independent state, but added it would not be an easy task.

“I think, ultimately, they probably do have a right to an independent state and an independent people, but again they’re going to have to get a good deal,” Pretraeus said in statements to Australian media.

“This has to be an amicable divorce with Iraq and a good deal with Turkey before they can risk that,” he added.
Kurdistan Region announced it would hold an independence referendum on September 25.

“But I literally don’t think they can afford to be independent. We calculated at one point – the CIA – that they needed to export about 800,000 barrels of oil at US$105 per barrel.”

“They are only producing 800,000 barrels on a really good day and exporting a subset of that now in the forties per barrel,” he claimed. “So, they still need some of what they get from Baghdad,” he concluded.

The terror group of ISIS is moving in an area which does not exceed two kilometers in Mosul, commander of the Counter Terror Service (CTS) Abdel-Ghani al-Assadi said on Monday.

In an interview with Reuters, he said that the terror group lost the appetite to go on with fighting.

They lost their balance completely, and we call on them to surrender, lest they will die, he noted.

Al-Assadi indicated the forces are gathering at al-Farouq Mosque, and they will start pushing eastward to the river.
This is the last phase in the fight against ISIS, he concluded.

The Iraqi forces have been pushing on the terror group with the assistance of the US-led coalition in the right bank of Mosul since February 19th.

one hour ago Last updated

BAGHDAD / Press tomorrow:Said Prime Minister Haider al-Abadi, on Monday that the time is very close to the final declaration of victory over the terrorist gangs Daesh, noting that the heroic forces are fighting to achieve new victories even during the days of Eid.

Ebadi said in a statement received by the Office of “Tomorrow ‘s Press”, said that it came during a speech during his inspection tour in a number of charitable and humanitarian institutions concerned with family and social care in the city of Kadhimiya.

He said Abadi , according to the statement, that “Aldoaash are trying to inflict great destruction and to commit the most heinous crimes against civilians in another spot trapped them in Mosul , ” he said, adding that ” the world is witnessing to our handling of human excellence,” he said . “We seek to liberate man before the ground.”

He added that “not for the blood of the martyrs and the wounded to what these victories achieved remarkable.”

Abadi was distributed according to the statement, during his gifts to the children who are orphans, congratulating Eid Al – Fitr, also briefed on the ongoing business and construction projects for future humanitarian institutions, and praised its role in the service of society and the efforts of existing and supervisors.

BAGHDAD – The Journal News
Revealed the international coalition against “Daesh” in Iraq and Syria, on Monday, the number of the “Daesh” elements who are still in the west of the city of Mosul, “he said, adding that” all the rest of the 200 Daesh element only. ”
Said coalition spokesman Colonel Joseph Skeroka in a press statement that “in the old city of Mosul there are a few Daesh fighters can hold out for some time.”
He added that “there are about 200 fighters Bdaash still west of Mosul,” past to say that “there is still hard fighting west of the city.”
He added that “there is a delicate balance is the importance of carefully to save civilians, and at the same time, Iraqi and coalition forces to be quick enough to save people from starvation.”
And security forces are represented by the federal police and an anti-terrorism liberation battles last bastions of the “Daesh” in Mosul.

Federal police team leader Raed Shakir Jawdat a n “declared the Federal Police Department has expanded its operations and opening up several axes to fight in a new door and approached a distance of 250 m from the commercial centers in Aserjkhanh.”

The face of Jawdat rescue teams competent to evacuate the families suspended in the old city and to provide immediate medical aid for cases of sick.

As he noted in a statement to a n “pieces of federal police took control of the main medical center for Doaash in white door and seize large quantities of drugs.”

It was Lieutenant-General Abdul-Ghani al-Asadi anti-terrorism Iraqi commander on Monday (June 26) The battle of Mosul will end the full control of the city from the organization Daesh within “a very few days, God willing,” after the terrorists failed in an attempt to engage the attacking forces.

He added in an interview with television, “Mosul and it is precisely the old area was left with only a little thing. Now all three axes became one line, and specifically on al-Faruq Street. God willing process is ongoing and will be launched to the final stage. Means the final stage who is the access to the river “.

Abizaid and al-Asadi “Yesterday we got certain elements Bhai neighborhoods who told them Tanak neighborhood Hermat as well as the Yarmouk and some neighborhoods, but was quickly cordoned off and is now under siege.”

It provides an international coalition led by US air and ground cover Iraqi forces in the battle of Mosul, the actual capital of the organization Daesh in Iraq, it has been going on for eight months.

The Iraqi army estimated the number of militants of the terrorist organization trapped in the old city of about 350 fighters holed up in the center of civilians in different homes and multiply from the booby-traps and suicide bombers and sniper fire to slow the progression of the army. 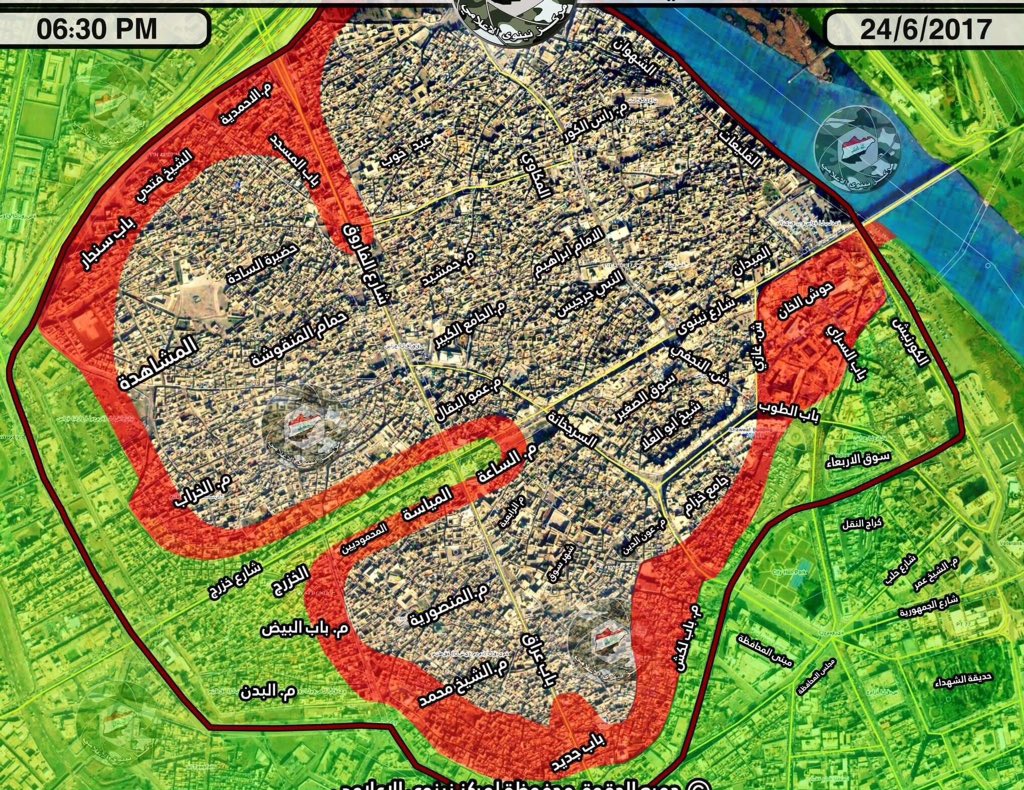 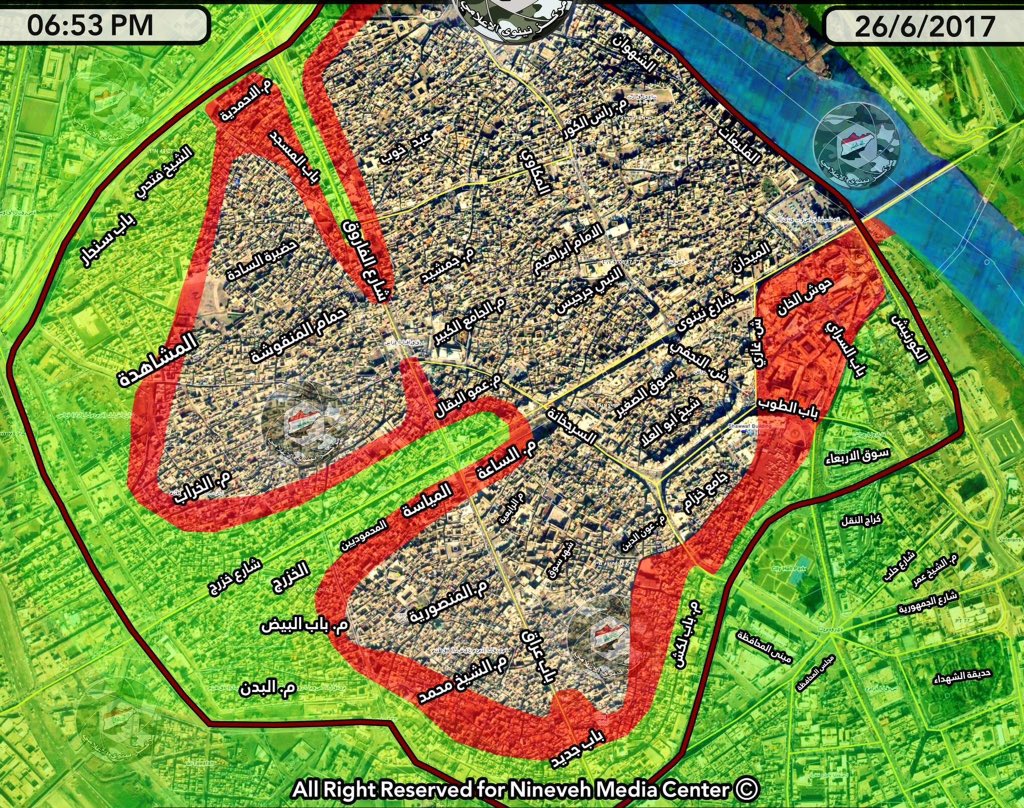 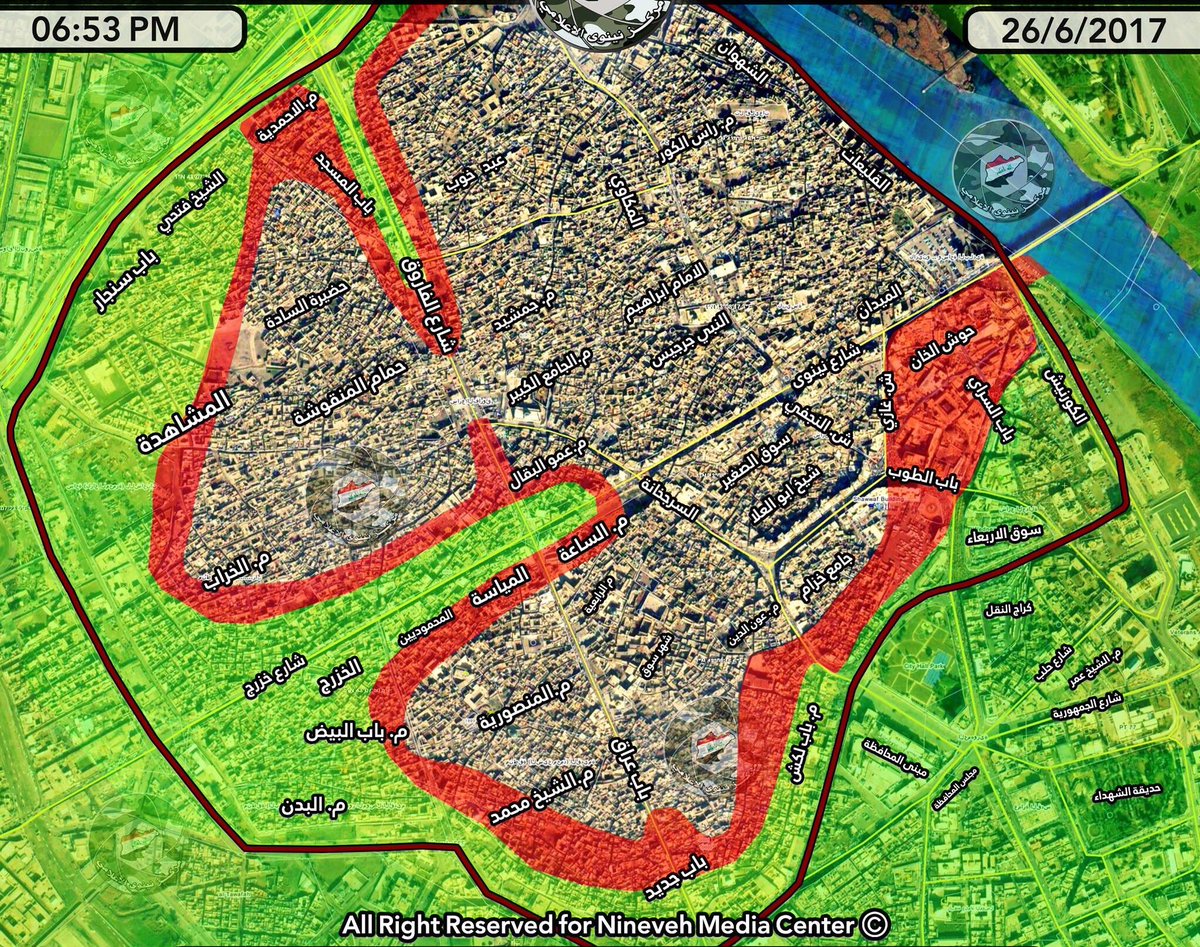 Twilight News / The US Supreme Court granted a victory of President Donald Trump, on Monday, reducing it within the provisions issued by the lowest court suspended an order issued by the travel ban from six Muslim-majority countries, and by agreeing to listen to his appeals in cases.

The court said it will hear arguments on the legality of which is one of the most prominent Trump policies in the first in his months of power, in the view of the following issues, which begins in October.

The court agreed to an urgent request for the management of an immediate start to the implementation of the Executive Order issued on the sixth of March during the consideration of the case.

It also said that it would allow partial implementation of a 120-day ban on the entry of all refugees to the United States.