3 hours ago
Last updated
12:14 PM
BAGHDAD /
The spokesman for the Joint Operations Command, Brigadier General Yehia Rasool, said on Saturday that the Russian reports of the death of the leader of Daash, Abu Bakr al-Baghdadi, has not been confirmed so far, indicating that the organization does not control any area in the old Mosul because it is under fire Security.

“The security forces continue to advance and liberate and achieve a great victory, and there are only a few areas left in the old Mosul,” Rasul told Al-Gharab newspaper. “The remains of a Baathist under the control of our military units are targeted by the terrorist organization, And the support of the Iraqi army. “
He added that “in the coming days, there is victory for the liberation of the rest of the liberation of Mosul, but what concerns us to liberate the citizen before the ground and we are committed to preserve the lives of the citizens and take them safe and eliminate the preacher,” stressing that “the rest of the city of Mosul, To remove the citizens who are used by the terrorist organization by force and coercion as human shields. “
He pointed out that “the information about the killing of the criminal Ibrahim al-Samarrai called Abu Bakr al-Baghdadi was not confirmed to us, and we will announce the availability of confirmed information,” noting that “what remains after the old city of Mosul is the Hawija and the upper Euphrates Al-Qaim and Ana and Rawah.”
The Russian Ministry of Payment said last week that the leader of the organization of Daqash Abu Bakr al-Baghdadi, may have killed a halal air strike on Syrian aircraft in Raqqa, while the International Alliance said on Friday that there is no tangible evidence on the fate of the leader of Daqash Abu Bakr al-Baghdadi, Would have any effect on the fighting in Iraq and Syria.

The military information cell reported on Saturday the size of the terrorist organization’s losses in Mosul, where security forces killed 115 terrorists and destroyed buildings, extensions, weapons and enemy equipment at the scene.

“The leadership of the federal police forces continues to fight in the southern axis and progress towards its targets in the Old City, the last area under the control of terrorist elements,” the cell said in a statement.
“The Old City is still besieged by the security forces, and progress is made on three axes. It is divided into three areas. It is divided into 5 streets, 6 square meters. It has progressed deep into the old city and continues to pursue terrorist elements.”
“The strikes targeted heavy losses in persons, weapons and equipment, and the units were assigned by the Air Force, the Air Force, the Marines and the artillery.”
“The security forces managed to kill 115 terrorists, 12 snipers, as well as the destruction of two warehouses, 10 explosive devices and a mortar.”
“The forces also managed to destroy a mine and four additives for Daish after dismantling an explosive belt of the terrorist organization in the old city,” she said.
“The rapid reaction squad continues to clean up the liberated areas and surrounds the Republican Hospital in Al-Shifa district of old Mosul,” it said.
The head of the federal police, Major General Raed Shaker Jawdat, announced on Friday, the liberation of the Church of Shimon in Bab al-Egg in the right of Mosul, stressing the destruction of 7 vital objectives of the organization of a hasty in the door of eggs and a new door.

BAGHDAD /
Special sources said on Saturday that the liberation of Mosul will be the night of Eid al-Fitr after the completion of all military operations in the old city.
The sources told Al-Ghad Press that “the anti-terrorist apparatus ended the pockets of a preacher’s organization near the Great Mosque of Nuri and managed to take control of the old city completely.” The combing operations are accompanied by minor clashes that are dealt with very quickly, Capabilities that have enabled it to prolong the fighting. “

The sources pointed out that “the Joint Operations Command confirmed through its aerial survey clean the entire city, and remove most of the people stranded through the safe corridors.”
The sources expected that “the Prime Minister, Haider Abadi, announce the liberation statement on the night of Eid al-Fitr, followed by celebrations in various cities of Iraq.”

15 minutes ago
Twilight News / Iraqi military source said on Saturday, the US special force arrived in the southern desert to spend wetlands (western Anbar province), it will be tasked with cutting the organization Daesh supply.
The source, who asked not to be named, that the American power (airborne) landed in the valley south of tossing wet (310 west of Ramadi) city km.
He added that tribal fighters would support the US force in its mission aimed at cutting supply Daesh from the desert towards the wet spend, according to Sky News reported Arab.
The wet spend exposed from time to time to attacks by Daesh and targeting Iraqi forces. 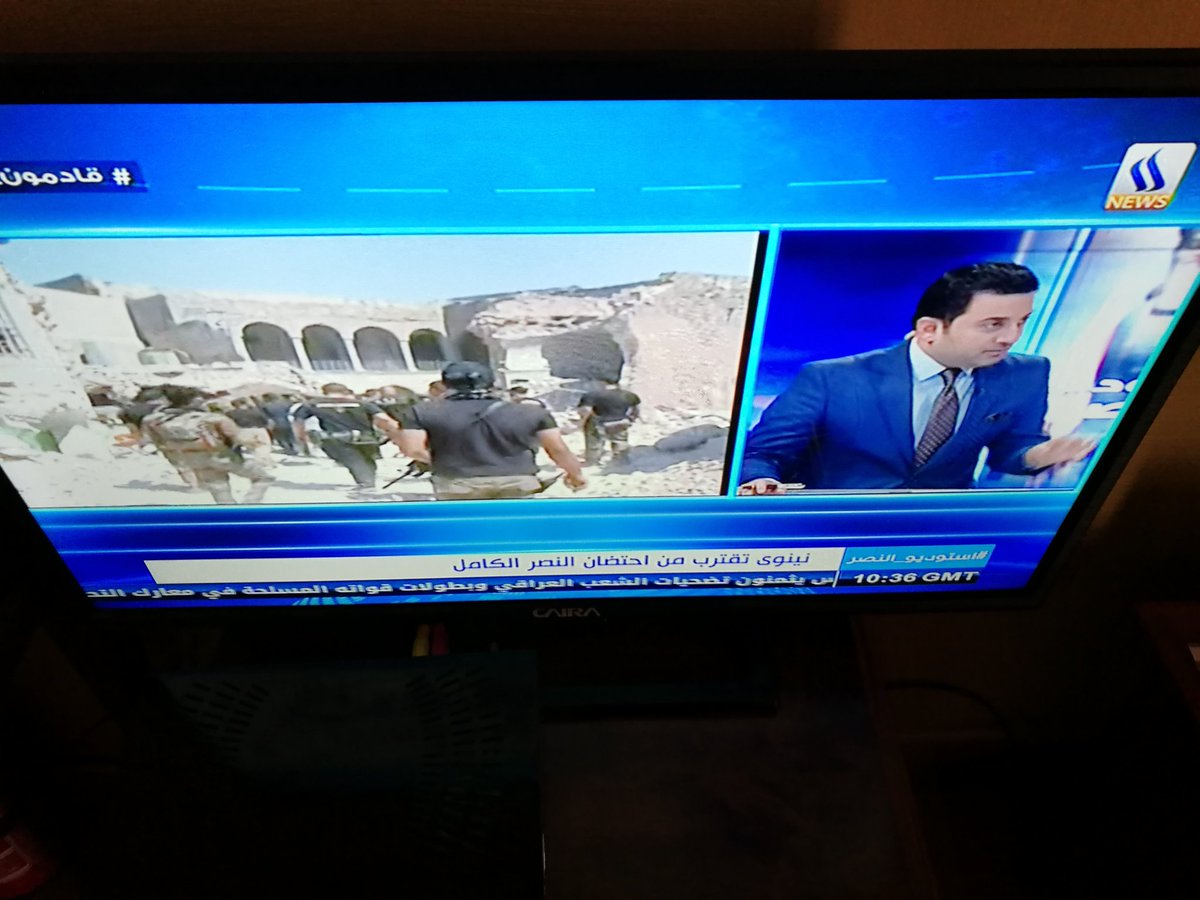 Iraqi Prime Minister Haidar al-Abadi discussed with US Secretary of State Rex Tillerson the developments in the battle to restore Mosul and the political and security situation in the region.

According to the media office of the Iraqi Prime Minister, in a statement seen by the network Rowoudao media, “Abadi received on Friday evening, a telephone call from US Secretary of State Rex Tilerson.”

He added that “Tilerson congratulated Abadi on the successes achieved in the battle of liberating Mosul and the political and diplomatic success of the regional opening on Iraq.” He also reviewed the results of the recent visit to Saudi Arabia, the Islamic Republic of Iran and Kuwait.

Abadi pointed to “the clear Iraqi vision to distance the region from the specter of conflict and war, and to strive to confirm the cultural and historical, and the development of economic interests between the peoples of the region and their countries.”

Abadi stressed that “all domestic and foreign efforts should be directed to focus on eliminating the terrorist gangs and not being dragged into side battles.”

“The importance of benefiting from the successful experience of cooperation between the army and Peshmerga in the battles of liberating Mosul,” Abbadi stressed, “the need to unite positions and mobilize international efforts to strengthen the financial situation, economic and state institutions.”

For his part, Tillerson agreed “with this trend and stressed that the United States will remain focused on fighting the Da’ash,” praising the “balanced Iraqi positions of regional crises and problems, and the importance of Iraq’s role in the stability of the region and cooperation between its countries.”

The US Secretary of State reiterated his country’s position not to support the planned referendum in Kurdistan and the need to focus efforts to cooperate with the central government to meet the challenges of stability and reconstruction after the completion of liberation battles.

Twilight News / media reported military cell on Saturday that the organization Daesh boxed three axes in the last strongholds in the city of Mosul, the old region, announcing the killing of dozens of members of the militant group during the progress of the Iraqi forces in that region.
She said the cell in a statement, said that the leadership of the federal police forces continue to run in battles in the southern axis and progress towards the goals set out in the old city, the last areas under the control of terrorist elements.
The statement added that the region is still besieged by our units, and progress on three axes Vq 3 a u according to 5 ASHA according to 6 ASHA has made progress in the depth of the old city and pursuing terrorist elements, support way by saying that painful blows to their strongholds have rolled broke down the ranks of the enemy as a result of blows painful.
The statement said he was burdening Daesh many losses in human beings, weapons and equipment were the pieces of evidence by the band mechanism and the Army Aviation and aircraft march and artillery, noting that the organization losses as follows: killed 115 terrorists, 12 sniper, dismantle an explosive belt number 1, and the destruction of the warehouse for moving equipment 2, Walker and destroy enemy number 1, and the destruction of 10 improvised explosive devices, mortar and detachment number 1, added to Daesh 4.
The cell ended its statement by saying that the rapid reaction task force continued to purge the liberated areas and besieged the Republican Hospital in the neighborhood of healing.

one hour ago
Twilight News / Information Office of the Prime Minister Haider al-Abadi said on Saturday the last received a phone call from US Secretary of State Rex Tillerson on Friday evening.
A statement issued by the Iraqi government, said that “Tillerson congratulated Abadi successes achieved in the battle to liberate Mosul and political and diplomatic success regional openness to Iraq.”
The statement added that he “reviewed the results of the recent visit to the Kingdom of Saudi Arabia and the Islamic Republic of Iran and the State of Kuwait.”
, The statement said, “Abadi pointed to Iraq’s clear vision to move the region away from the specter of conflicts and wars, and hard to confirm the orientation of cultural commonalities, historical, and the development of economic interests between the peoples of the region and their countries.”
The statement continued that “Tillerson, the price of Iraqi attitudes balanced regional crises and problems, and the importance of Iraq’s role in the stability of the region and cooperation between their countries.”
It added the statement that “Abadi stressed the need to direct all local and external efforts to focus on the elimination of terrorist Daesh gangs, and not to be dragged to the side battles,” adding that “Tillerson agreed with this approach and stressed that the United States will remain focused on fighting Daesh.”
The statement pointed out that “Tillerson reiterated the position of the United States not to support the referendum scheduled to take place in Kurdistan, and the need to focus efforts to cooperate with the central government to meet the challenges of stability and reconstruction after the completion of the battles for liberation.”
He ended the government’s statement by saying that “Abadi stressed the importance of benefiting from the successful experience of cooperation between the army and the Peshmerga in the liberation of Mosul battles, pointing to the need to unify positions and mobilize international efforts to support the strengthening of the financial situation, economic, and building state institutions.”
The US State Department has expressed earlier appreciation to the aspirations of the Kurdistan Region to hold a referendum for independence from Iraq, while the promised referendum that distract attention from the war against al Daesh, called to communicate with the federal government in Baghdad on “important issues.”
US Secretary said in a statement: “We appreciate the aspirations of the Iraqi Kurdistan region to hold a referendum of independence but conducted attention from the war Payout against Daesh, adding that Washington was” encouraged Kurdish authorities in Iraq to communicate with the central Iraqi government on important issues. ”
It is scheduled to hold the Kurdistan Region on 25 of the month of September next referendum, the right of self-determination, independence from Iraq or not, and this triggered mixed reactions internally and externally, but the Kurdish leadership has recently confirmed its determination to proceed to hold the referendum.