The battle of #Mosul is all but over. Da’ish only controls pockets within the old city district and #Iraq‘s armed forces are advancing 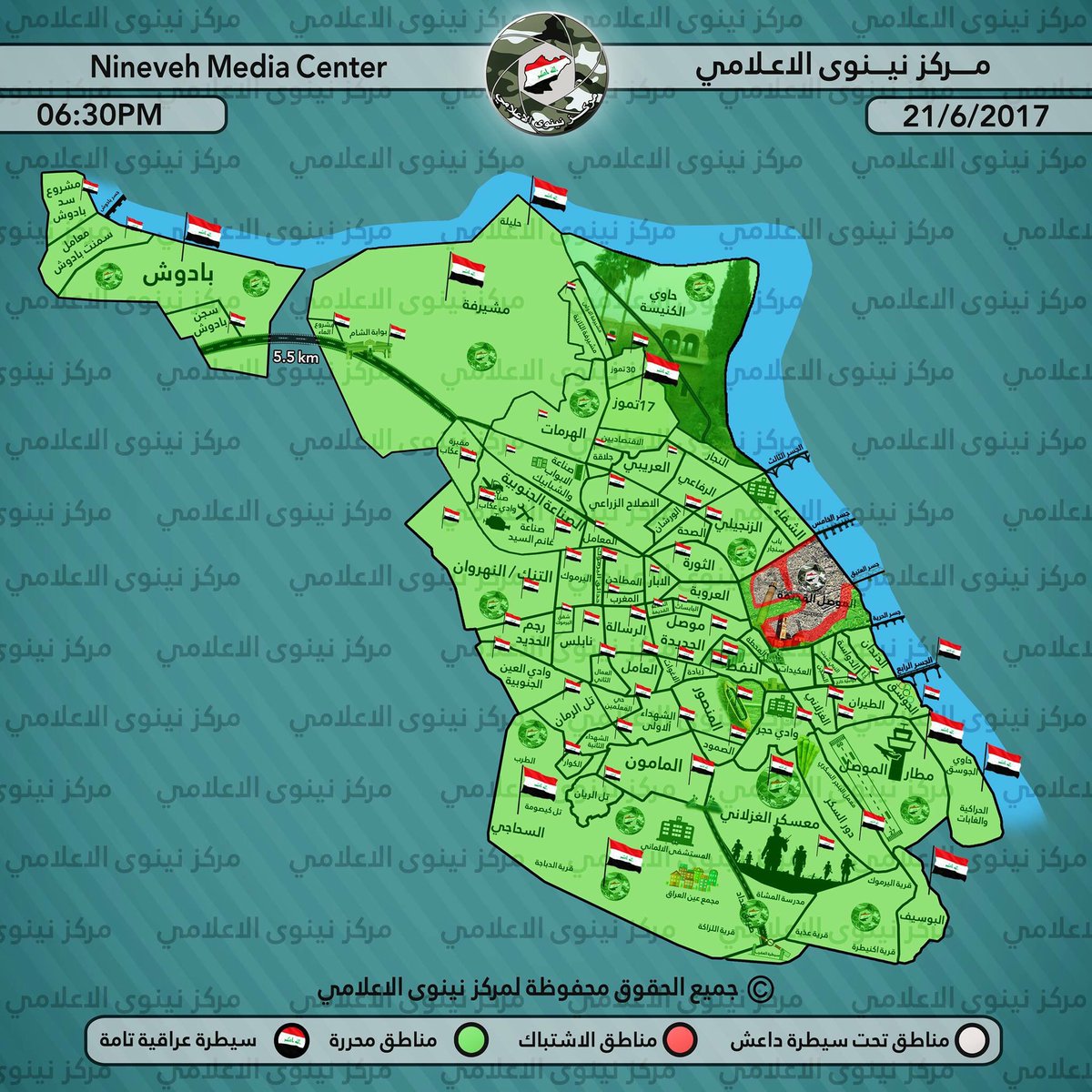 {Baghdad: Euphrates News} Prime Minister Haider al-Abadi revealed on Thursday, the amount of damage caused by the terrorist gangs Daesh in the infrastructure of the public sector, noting that it amounted to i 50 billion dollars. “
Ebadi said, during his weekly press conference, “but left little of the liberation of Mosul , ” he said, adding that ” the bombing of Al – Nouri mosque and the declaration of the end of the humpback Daesh and we will constructed a human patrimony, not only for the Iraqis.”
And on his visit to the neighboring countries, Abadi said that “States expressed during the regional visit admires editing areas, and visit security and economic impacts, and continue to find a consensus in the region to participate in the fight against terrorism and to continue the cooperation of economic peoples investment to create job opportunities for improving living standards.”
He said that ” the Council of Ministers today voted on the national housing project in the province of Maysan , a new approach to the government to provide housing for citizens, and approved a document to restore stability and reconstruction in Iraq and includes all infrastructure generality provinces , ” pointing out that ” the destruction of Daesh infrastructure for the public sector and the government’s only It amounted to $ 50 billion, while the damage to the destruction of infrastructure , the private sector and the property of citizens may exceed this figure , “noting that” we areworking on holding an international conference in Kuwait for the reconstruction ofIraq after the Daesh phase. ”
” The cabinet today approved a supplementary budget for the year 2017 relating to the payment of dues farmers and contractors and military spending and others, it will be prepared holiday feast and submit them to parliament for approval.”
In another context, the prime minister said, “We do not want to interfere in the work of the judiciary for wanted persons planned to hold a political conference in Baghdad.”
He stressed, “we are working to open Trebil port and newborn are interested to opening them up with Jordan to find other outlets to increase trade exchange, and are interested in quickly open the way port to port Trebil and prevent any exposure to Daesh road and in the next phase we will open the road and insist on it.”
He added, “we are working to encourage Iraqi exports, and we have agreed , starting with Saudi Arabia in promoting Iraqi goods to Saudi Arabia and to allow the entry of Iraqi businessmen as reflected positively to increase the trade exchange between the two countries.”
And on the Gulf crisis, Abadi reiterated “We did not go any same mediation crisis Gulf regional visit, and we visited for the development of relations, coordination and cooperation to fight terrorism , ” stressing that ” the regional visit us highly successful and today everyone understands the role of Iraq and its strength in the region.”
However , ” The problem is that the differences between the countries of the region up to the degree of focus on the differences, but even it up to support terrorist groups Defiance of different countries , including” pointing out that “some countries suggested that Iraq could play this role {mediation} as he became the strong presence, and our answer was that all the different countries agree on this proposal. ”
He noted that “Saudi Arabia stressed the importance of Iraq in the region and wanted to develop bilateral relations, Kuwait has a desire to invest in Iraq, but there is the complexity of the administrative system hinders such investment and we are treated so as to achieve the partnership with Gul neighborhood.”
He said the “US presence in Iraq is not a fighter, but the role of attribution, training, advice, aviation , and after the end of Daesh we do not need Air Alliance, and confirm that the unity of our strength code in defeating terrorism and we hope to embody it in the development process and that we do not accept Bafassd and attacks on public money or hinders the development process in Iraq”.
” I say all politicians and blocs that will benefit everyone, but you should not look atthings in a way selfish” .anthy
http://alforatnews.com/modules/news/article.php?storyid=145131

Iraqi Prime Minister Haidar al-Abadi said on Thursday that Iraq is returning to its true position among the countries of the world through dialogue and diplomatic discourse.

“Iraq is working to find areas of consensus between the regional countries,” Abadi told a news conference after the cabinet session. “Iraq is returning to its true position among the countries of the world through dialogue and diplomatic discourse.”

On the differences in the region, especially the recent Gulf crisis, Abadi said, “We will not interfere with any mediation between regional countries and the fight against terrorism at the top of our priorities.”

He also said that “Iraq today stands a position that can not exceed one.”

Abadi also referred to Iraq to attract real international assistance in the reconstruction of liberated areas of the organization advocating, noting that the Cabinet discussed the amendment of the system of self-management of health institutions.

US-led Coalition has responded on Thursday to ISIS’ destruction of Mosul’ Great al-Nuri Mosque in the right bank of Mosul, denying any shelling operations in the area.

The mosque was well known as the place where ISIS leader Abu Bakr al-Baghdadi made his infamous speech announcing the so-called caliphate on July 4, 2014.

“This is a crime against the people of Mosul and all of Iraq, and is an example of why this brutal organization must be annihilated,” Martin said.

“The responsibility of this devastation is laid firmly at the doorstep of ISIS, and we continue to support our Iraqi partners as they bring these terrorists to justice. However, the battle for the liberation of Mosul is not yet complete, and we remain focused on supporting the ISF with that objective in mind.”

The mosque had stood in Mosul for over eight centuries, and its famous leaning minaret earned the city of Mosul the nickname “the hunchback.”

The US-led coalition is working by, with, and through the government of Iraq to defeat ISIS in Mosul and throughout Iraq.

The coalition contributes to the defeat of ISIS by providing the Iraqi forces with equipment, training, intelligence and surveillance, precision fire support and military advice to leaders.

The coalition has enabled the Iraqi Security Forces to reclaim over 47,000 square kilometers of their land from ISIS for the people of Iraq.

The Council of Ministers approved in its regular meeting on Thursday, chaired by Prime Minister Haider al-Abadi budget supplementary to the year 2017. A statement by the Prime Minister’s Office, that “During the meeting, the vote on the national housing project in the City district of Maysan, where the National Investment Commission to grant and issue the investment license to build a memorandum of understanding between the province of Maysan and a number of companies. ” “It was also a vote on the board of directors in the educational system of the hospital, as well as in health departments in the provinces, and the cabinet voted on the sale and rental properties and state land system, and the public sector for investment purposes and leasing them.” The statement continued, “was also voting on the draft graft law.” The cabinet voted “to document the national plan for the reconstruction of the general framework, and has approved the draft general budget of the supplementary federal fiscal year 2017 Act and referred to the House of Representatives

Twilight News / said the Special Representative of the Secretary General of the United Nations in Iraq, Jan Kubis on Thursday that the organization Daesh destruction of Al-Nouri mosque and historic minaret index on the end of regulation.

He said in a press statement Kubis responded to Twilight News, “This barbaric act is added to the history of Daesh crimes against Islamic and human civilization in Iraq.”

He pointed out that the destruction of the mosque comes at a time when Iraqi forces cracked down on militants Daesh down in the old city, which indicates the desperation of the organization and an end.

The Iraqi army announced yesterday to blow up the organization Daesh of Al-Nouri mosque and historic minaret known as a beacon of humpback. It is the mosque, which declared him the organization’s leader Abu Bakr al-Baghdadi, a state succession on a vast territory in Iraq and Syria.

Twilight News Iraqi Prime Minister Haider al-Abadi / decided on Thursday to disable the official working in government departments and institutions during the next week on the occasion of Eid al-Fitr.

According to a statement issued by the General Secretariat of the Council of Ministers that Abadi, disable the face of the official working near the occasion of Eid al-Fitr, effective on Sunday 25/06/2017 until Thursday 29/06/2017.

The statement added that the service and security ministries shall ensure the continuation of services through its staff during the mentioned days.