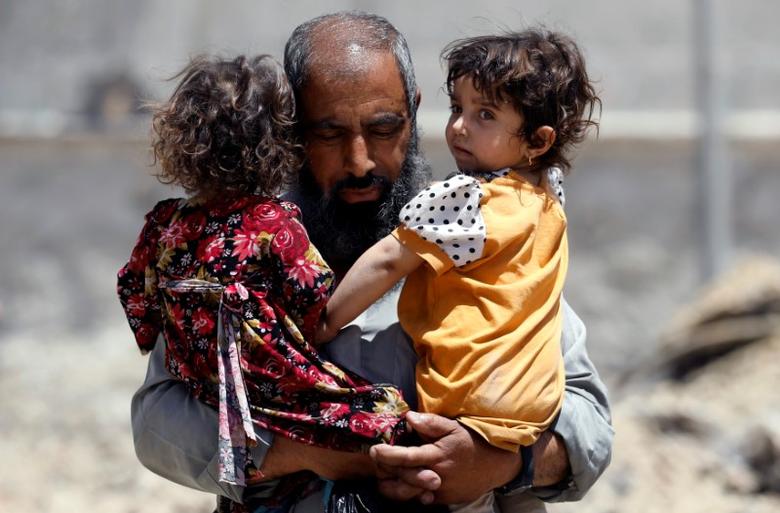 A girl looks out from the arms of a displaced resident, who fled home due to the ongoing fighting between the Iraqi forces and Islamic State militants near the Old City in western Mosul, Iraq June 13, 2017. Picture taken June 13, 2017. REUTERS / Erik De Castro

ERBIL, Iraq Iraqi forces said they were about to complete the encirclement of Islamic State’s stronghold in the Old City of Mosul, after taking control of a neighboring district on Thursday.

Iraq’s military said it had captured Bab Sinjar, north of the historic, densely-populated district where the militants launched their cross-border “caliphate” in 2014.

Government forces and their allies still have to take full control of Medical City, a complex of hospitals further north along the bank of the Tigris, to enclose the militant enclave. [NL8N1JA1VU]

The offensive to retake the northern city started in October with air and ground support from a US-led international coalition.

Iraqi government forces retook eastern Mosul in January then a month later began the offensive on the western side where bout 200,000 civilians remain trapped behind Islamic State lines. [NL8N1IX3WN] [nL8N1IV0ZR]

The fall of Mosul would, in effect, mark the end of the Iraqi half of the “caliphate” that Islamic State leader Abu Bakr al-Baghdadi declared in a speech from a historic mosque in the Old City.

About 800,000 people, more than a third of the pre-war population of Mosul, have already fled, seeking refugee with friends and relatives or in camps.