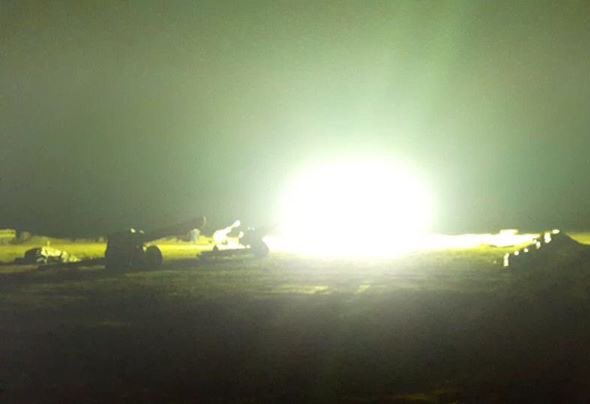 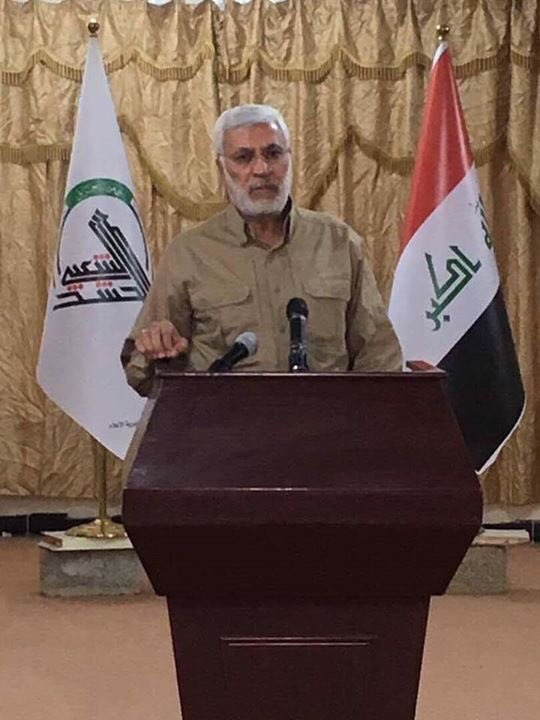 Baghdad
Deputy Chairman of the popular crowd Abu Mahdi al-Mohandes, Friday, the end of the mobilization in western Mosul, while noting that all the objectives of the operations were achieved.

The Engineer said in a press conference held today, and followed by Alsumaria News, “The popular mobilization operations in western Mosul ended with the achievement of all its objectives,” noting that “was liberated 14 thousand km 2 and 360 villages.”

“The crowd has been able to kill 2,000 worshipers west of Nineveh,” the engineer said, adding that “the crowd is ready to liberate Tal Afar district and await the orders of the commander-in-chief of the armed forces.”

“After the border is completely liberated, it will be handed over to the border police,” he said.

On June 4, 2017, the prominent leader of the popular crowd, Hadi al-Amiri, announced that the forces of the crowd were continuing to “completely” clear the Iraqi-Syrian border to the Al-Waleed crossing in Anbar province, stressing that the liberation operations were an “Iraqi option and a privilege”.

Twilight News / said a military commander of a pro-Syrian government that the Syrian forces and factions allied with them in the southeast of the country arrived at the Iraqi border on Friday near Tanf base where the United States will train a group of local organization to fight Daesh.

Progress comes after an escalation in tension between the United States and the Syrian government and its supporters over control of the southeastern border with Iraq.

The commander, a non-Syrian military in support of Syrian troops, military alliance, “The first units of the army and its allies arrived at the Syrian-Iraqi border northeast of the Executive”, as quoted by Reuters.

And the region of great importance to the Iranians allied with al-Assad may open ground by supplies from Iran to Iraq, Syria and Lebanon, which is a source of great concern to US allies in the region.

Located in the desert Tanf desert area that stretches to the Jordanian and Iraqi borders. Announced that Damascus Badia a military priority.

And extracted the US-backed opposition areas Balbadah of the organization of the Islamic state, which was alarmed by the Syrian government and its allies.

The commander said that the Americans hired opposition groups to prevent Syrian forces and its allies in the region to progress from the opening of the Syrian army and its allies a new path and march towards the border.

He added, “It is a message for all.” But he gave no details.

The coalition has threatened the pro-Assad to strike US sites in Syria, warning that “restraint” on US air strikes will end if Washington crossed the “red lines”.

America launched air strikes on Tuesday against pro-government forces said they had formed a threat to US forces and groups of the Syrian opposition in the region in the second operation of its kind in recent weeks.

Said Al-Manar television of the Lebanese group Hezbollah on Friday that the army and its allies and sought “control area Badia scale.”

The Syrian Observatory for Human Rights said dozens of government soldiers and factions allied with him, and arrived at the border.

He explained that they have achieved, to a point about 50 kilometers north of Tanf after their progress in the desert around the area controlled by the opposition, backed by Washington.

A federal police officer said on Friday that the liberation of the Zanjili area, one of the last and largest armed strongholds in the northwestern axis of Mosul, has been completed.

“About 70 da’is were killed in al-Zanjili, in addition to the destruction of dozens of booby traps that targeted the military units in the area,” al-Bayati said.

A federal police officer said on Wednesday that 95 percent of the Zanjili area had been liberated .

Lt. Col. Ali al-Bayati said that “the federal forces are now imposing control on about 40% of the area of ​​healing also amid clashes that have increased violence since the dawn of the day and the air base of the aircraft of the International Alliance.”

one hour ago
Last updated
The time now is 04:25 PM
Baghdad / Al-Ghad Press:
Former Iraqi Finance Minister Hoshiyar Zebari said Friday that the expected vote in the referendum on Kurdish independence would strengthen the position of Iraq’s Kurdistan region in negotiations with Baghdad but would not lead to an automatic separation from Iraq.

“The vote on independence will not mean that the Kurds include the oil-rich Kirkuk region or three other disputed areas in Kurdish-controlled territory, nor will it mean an automatic separation from Iraq,” said Zebari, a leader of the Kurdistan Democratic Party (KDP), which has the referendum issue.
“You will hear people say that with Iraq’s unity and territorial integrity and we want dialogue between Baghdad and Erbil, we understand all that,” Zebari said.
“The referendum is a democratic process and no democracy can oppose a referendum. We are not talking about independence. We are talking about a referendum,” he said.

Lt. Gen. Shaker Jawdat said his forces were controlling 90 percent of Zanjili district, and were advancing along 10 kilometers in neighboring al-Shifa. Both districts are the last two around the medieval Old City, IS’s last bastion in Mosul from where the group declared in 2014 the establishment of its rule in Iraq and Syria.

Jawdat said his forces had also evacuated tens of civilian families from both areas to safer zones under security control.

Iraqi government troops regained control over eastern Mosul in January after three months of fighting. Operations for the western side of the city launched in mid February, and Iraqi generals say a few hundreds of IS fighters remain in the Old City as a last refuge.

Iraqi forces began late April to advance towards the enclave from the northwest, having besieged it from the south for weeks to no avail.

At least 200.000 civilians are believed to remain in IS captivity in the Old City, and the United Nations said recently that IS systematically shot dead fleeing civilians, killing more than 200 since May 26th,

“Credible reports indicate that more than 231 civilians attempting to flee western Mosul have been killed since 26 May, including at least 204 over three days last week alone,” the U.N. human rights office said in a statement on Thursday.

Khandan – Three years after the fall of the thundering city of Mosul , however , the organization of “Daesh” terrorist, Iraqi forces are on the cusp of becoming the second largest city in the country of terrorists restored.

He says the US envoy to the International Alliance of Brett Macgork “Three years ago, at this time, it was Daesh rapidly advancing toward Baghdad.”

According to coalition spokesman Colonel Ryan Dillon, the Iraqi forces “were not ripe for a similar threat” as the terrorists “were knocking on the gates of Baghdad.”

Macgork It is at that time, the recovery seemed “almost impossible, and many chanted (Well, this is the end of Iraq).”

The combined factors contributed mainly to stop the advance of “Daesh” to Baghdad, and could not later than launching a traditional large – scale attack on the capital.

Hurried religious authority Ali al – Sistani, to call to volunteer in order to fight the organization.

The factions fought the popular crowd, to repel the elements of progress “Daesh” first, and then push them to retreat, at a time when I saw new units of volunteers light.

Two months after the fall of Mosul, the US began directing strikes against “Daesh” in Iraq as part of an international coalition presented along with air support, support and training to Iraqi forces.

Since then , then, Iraqi forces recaptured several areas , however , were “Daesh”, including three cities, and managed to control most of the city of Mosul after the attack was launched seven months ago.

Al – Asadi explains that “left to Daesh (in Mosul) only three or four neighborhoods boxed in.”

When you control “Daesh” on Mosul, al – Asadi believes that ” the pieces of (military) that existed, was the fact thatlacked some of the preparations and some equipment and other things, so it was a quick process of falling.”

But after three years, that ” the pieces are well prepared in preparation for their relationship and become citizens, this point is very important, a good relationship,” adding that ” the citizen is cooperating with the security cuts.”

The success of the restoration process of Mosul , according to an analyst who specializes in Iraq ‘s affairs at the Institute of “War Studies” Patrick Martin that “the progress of Iraqi security forces since its collapse in June 2014 shows.”

But Martin explains that the restoration of Mosul “should not obscure the fact that those forces are still incomplete and flawed” especially since they “still do not have numerous enough position to cleanse and caught the country.”

Iraq paid a heavy price during the fight for terrorists, as the war years resulted in the deaths of thousands and thedisplacement of hundreds of thousands, rather than the destruction of the parties to the country, and the suffering that many witnessed under the brutal rule of Daesh.

In this context, the commander of the Second Division in the fight against terrorism forces , Lieutenant – General Abdul – Wahab al – Saadi told AFP refers to ” a very great tragedy in general passed by the Nineveh province and the city ofMosul , in particular.”

Saadi depends upon the suffering of civilians from massacres and killings ” in addition to the great price you paid all the pieces.”

The restoration of the city of Mosul does not completely end the war against the “Daesh” in Iraq, as still in control ofthe areas in the province of Kirkuk and in the west of the country.

It warns Dillon in this context that there is a “future threat” is that the organization of “Daesh” terrorist “will return again to the insurgency policy” of the bombings and suicide attacks.