United States warned Thursday that a referendum on the independence of the Kurdistan region may distract attention from the fight Daesh.

US Secretary in a statement : “We appreciate the aspirations of the Iraqi Kurdistan region to hold a referendum of independence but conducted attention from the war Payout against Daesh.”

The statement added that Washington was “encouraged Kurdish authorities in Iraq to communicate with the central Iraqi government on important issues.”

It agreed Kurdish parties in the Kurdistan region, on Wednesday, to hold a popular referendum on the fate of the region on 25 September next.

They also agreed to hold parliamentary elections and the presidency of the region on the sixth of November.

The agreement came during a meeting of the Kurdish parties , headed by Massoud Barzani Wednesday in the resort of Salahuddin in Arbil province amid some Kurdish political forces.

{Baghdad: Euphrates News} reveals chairman of the National Coalition, Iyad Allawi, on Friday, details of an important meeting was held at his home.
And Allawi will speak during the program {Kalos} which displays the channel on the Euphrates space at one o’clock after midnight, about an important meeting at his home and whether the meeting saw {} a conspiracy against the former Prime Minister , Mr. Nuri al – Maliki?!.
It will also examine to what took place between him and the leader of the Iranian Revolutionary Guards Qassem Soleimani , a high – level meeting! .anthy
http://alforatnews.com/modules/news/article.php?storyid=144261

The Iraqi Real Estate Bank announced on Thursday the reopening of a branch on the eastern side of Mosul as part of the government’s plan to start granting financial loans to civilians to begin reconstruction.

“The bank has chosen to build an alternative to the original building which was destroyed and equipped with all the necessities to start granting financial loans to the people of Mosul in accordance with the initiative of Prime Minister Haider al-Abadi,” the bank’s director Khodair Abbas al-Zuhairi told a news conference in Baghdad.

Zuhairi said that “the opening of the building and will be the direct granting of financial loans, one day after the Iraqi government announced the liberation of the city of Mosul completely, the control of the organization of Daed.

He stressed that “the people of the city of Mosul will all include financial loans, without interest and up to 50 million dinars (about 40 thousand dollars) repayment period of 10 years.”

Most of the houses, property and government institutions on the eastern side of the city of Mosul were destroyed, but officials at Mosul’s local administration confirmed that the damage to infrastructure and property on the western side was double.

And closed several branches of banks were operating in Mosul, after the control of a preacher to maintain the province in the summer of 2014.

Government troops, in the eastern half of the city, recovered in January and have been fighting since February to wrest the western half.

According to a statement issued by the Iraqi government, it was during the meeting to discuss the developments of military operations in Mosul, the security situation and political, and sustain the momentum of victories to liberate the entire territory, and the coordination between the military units which contributed to defeat the enemy.

The statement added that it was emphasized the importance of the unity of the word and work in order to achieve the final victory over the terrorist Daesh, and restore stability to the liberated areas.

[Oan- Baghdad]
called on the three presidencies and political blocs to protect him in a joint statement after their meeting Wednesday night to develop security coordination between Iraq and the countries of the region.
A statement by the Presidency of the Republic received by all of Iraq [where] a copy of it , “held at the Peace Palace in Baghdad Wednesday night, the meeting of the three presidencies and a number of leaders of political blocs, and during which the comprehensive center of discussion on the latest security and political developments at the national, regional and international levels, and what happened during the the last days of bombings and terrorist acts at home and abroad , including the Islamic Republic of Iran, Afghanistan and the United Kingdom and other countries. ”
The meeting condemned strongly condemned the terrorist attacks against the evil , stressing the solidarity of the Iraqi people with the peoples of these countries , “called for security, diplomatic and political coordination between the countries of the region and all friendly countries develop particularly involved in counter – terrorism operations, and to the initiative to deepen trust and understanding to ensure the removal of the causes of tension and replacement calm, stability and fraternal cooperation, and called for a reconsideration of contentious positions and problems. ”
It focused meeting that “Iraq ‘s return resolutely to carry out its vital role in promoting peace and stability and promote the region after presenting enormous sacrifices in the face of terrorism hurts be exposed to any other country to the terrorist gang crime, and affirms its readiness to make every effort to bring the views and deepen the constructive dialogue between all brotherly and friendly countries as well as the promotion of informational cooperation so as to ensure the elimination of terrorist groups and the reasons for their presence with renewed confirmation of the need to find peaceful solutions to armed conflicts , particularly in Libya, Yemen and Syria. ”
http://www.alliraqnews.com/modules/news/article.php?storyid=62763

6 hours ago
Last updated
The time now is 11:15 AM
Baghdad / Al-Ghad Press:
Al-Ghad Press received Thursday a document issued by the General Secretariat of the Council of Ministers, addressed to the Supreme Judicial Council, ministries and non-affiliated bodies of the Ministry and the provinces and all its councils, stressing the need to act by the Council of Ministers Resolution No. 361 of 2015.

The resolution provides for the adoption of a unified national card for governmental and non-governmental entities to prove the identity of the owner, to be an alternative to citizenship and a certificate of nationality.
The document indicated that the Directorate of Civil Status, Passports and Residence is fully prepared to equip all governmental institutions with the digital reader of the national card, as well as training the companies nominated by the institutions to work on the system.
In accordance with the provisions of Law No. 3 of 2016 and pursuant to article 35, paragraph 1, the directive concerned the adoption of a national card with governmental and non-governmental entities in establishing the identity of the owner and the definition of his Iraqi nationality.

Map update #PMU are advancing south to secure the entire borderline with #Syria, one more day and they will enter Anbar desert. #Iraq 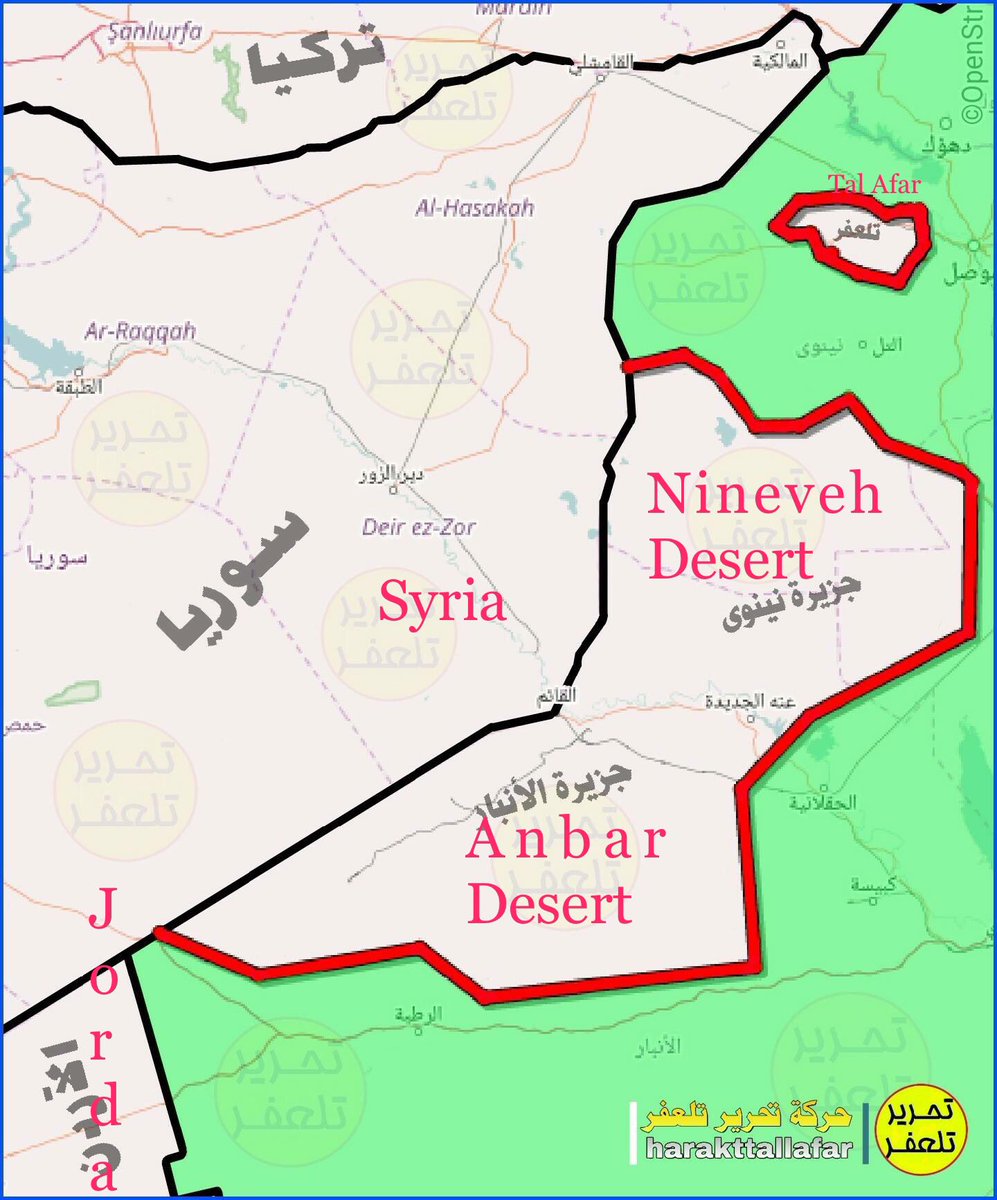 Like Loading...
Security scene Thursday June 08 2017 at 13:46 pm (1359 Views)
n
BAGHDAD / Sky Press:
It showed the latest map of Nineveh province, on Thursday, widening the territories liberated by the security forces from the control Daesh terrorist gangs.
Show map published by the media war that cell, the rest of the coast edit operations right from the city of Mosul.