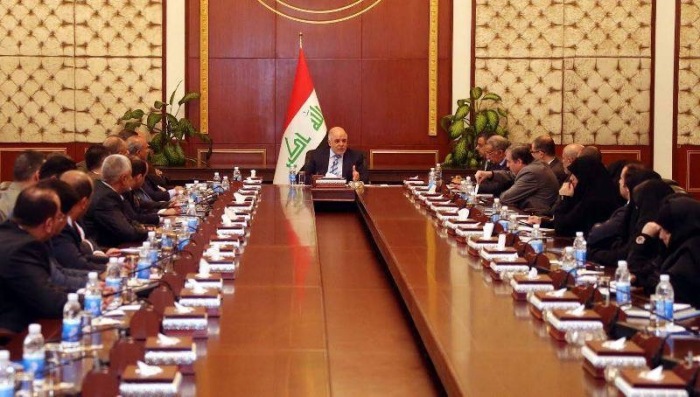 Twilight News / Cabinet held its regular meeting on Tuesday under the chairmanship of Prime Minister Haider al – Abadi, the meeting witnessed the vote on the evaluation and selection of higher grades and general managers in order to increase professional competence and mechanism.
The Council voted to approve the recommendation of the Committee on Economic Affairs on the General Company for Food Products in the Ministry of Industry and Minerals financing to increase the operational advance of the contract between the General Company for Vegetable Oils General Company for food products regarding the processing of material edible oil from 10 percent to 30 percent for the processing of trade b (100) thousand tons annually to market in the ration.

The Council voted to reconsider customs fees imposed on cigarettes.

The Cabinet also drew 40 percent , regardless of the benefits contractors who have been their scrutiny by the Office of Financial Supervision immediately and without discrimination.

The voting was also on the National Plan for Human Rights ( the implementation of international commitments to the Government of the Republic of Iraq).

The face of the cabinet that holds the two companies Diyala Electrical Industries and Electrical Industries and the Ministry of processing power transformers distribution maximum possible quantity to be used in restoring stability in the liberated areas , tasks that calculates prices accurately with the exclusion of any other fees or services to those who receive a salary from the ministry companies.

The Cabinet also face the fact that the Committee on Economic Affairs and the Ministry of Planning to take the necessary to accomplish the stated Council of Ministers resolution No. 110 for the year 2017 with money recovered from the agricultural initiative measures.

In the Council in coordination with the Supreme Judicial Council on the proposal of the Second Amendment to the Law of the Independent Electoral Commission Act No. 11 of 2007 and its ability to carry out specific tasks in accordance with the law.

It was also voted on the recommendations of the committee dealing with cases of universities and colleges students before recognition.

Council directed by the Ministry of Planning and certainly on the implementation of the Council of Ministers Decision No. 89 of 2017 on the financing of water projects and sewage referred to by the decision.