Elements of the Iraqi Rapid Intervention Force in Mosul

An official source confirmed the liberation of Iraq 97% of Ayman Mosul from the grip of the organization, “Daash,” while the army announced the killing of “administrative affairs” of Nineveh and Al-Raqqa in the organization with an air strike on the right side of the city.

Maps .. Areas under the “Daash” west of Mosul

The director of the Iraqi military intelligence said in a statement issued on Sunday that “the terrorist leader of the gangs, Muhammed Mujbil al-Jawari, the coordination of coordination operations, was killed by an air strike in the Zanjili area on the right side of the city of Mosul, based on information Directorate.”

The Directorate added that Al-Jawari was recently appointed as the administrative affairs officer for Nineveh and Al-Raqqa.

A map published by the Iraq War Information Cell on Saturday showed that the remaining areas under Da’ash in Mosul are a very small part that the Iraqi army expects to release in the near future.

For his part, confirmed a member of the Nineveh province, Hossam al-Abbar, told the “Sputnik” that the Iraqi forces succeeded in liberating 97 percent of the right side (western part) of the Mosul of the militants, “Daash,” and the survival of three neighborhoods only from Ayman Mosul under the control of the organization.

He also said that Iraqi forces now besieged more than 450 of the “Daash” militants there, explaining that “most of them are foreign nationalities.”

“The federal police forces and the rapid response to the liberation of the neighborhoods of healing and ginger and health, and when completed clearance of the axis will unite all forces to attack the old city from all sides.”

The Badr Organization, one of the Iraqi popular factions, announced on Sunday the liberation of the Tel Qassab residential compound, north of Kairouan, and the villages of Tel Qasab and Ain Fathi al-Shamali, in addition to controlling three car bombs and a quantity of weapons.

The organization added that “progress is continuing in the process launched since yesterday,” asserting that “the forces are moving towards the targets set with the Imam Ali combat group.”

The Iraqi forces, the Iraqi army, Kurdish Peshmerga forces, units of the Popular Gathering and the tribal crowd, supported by the United States-led international coalition against Da’ash, have been involved in Operation Nineveh To restore the city of Mosul from the grip of the “Dahesh”, which was defeated from the left side of the city in late January.

Twilight News / Federal Police team leader Raed Shakir Jawdat said on Sunday that cuts federal police completed editing its goals within the first stage in the northern axis operations.
He explained in a press statement Jawdat responded to Twilight News, he said that during this phase “edit 10 goals, including vital neighborhoods economists and July.”
He pointed out that “our units are currently stationed in the southern edges of July 17 in preparation for the start of the battle of the last stage and rush towards Zndjeli and Bab Sinjar and enter the old city and edit Al-Nouri mosque and the lighthouse of humpback,” a mosque which declared him the leader of Daesh Abu Bakr al-Baghdadi, the “Caliphate State” about before three years.
He added Jawdat “Federal police cuts in the southern axis continue military operations Alastnzafah defenses Aldoaash in the door of brick and rod milk door again targeting the headquarters and barracks harboring terrorists and their fortifications surrounding the Mosque of Al-Nouri area and destroy roofed to house elements Daesh in the viewing area.”

Economy News _ Baghdad:
The face of the Rafidain Bank, on Sunday, its branches organized instruments adopted and the issuance of bills of citizens, stressing the need to be done without delay.

He said the media books of the bank in a statement, “Economy News” received a copy of it, “it was directed bank branches in Baghdad and the provinces to organize the instruments adopted and the issuance of bills of citizens in one day and without any delay,” noting that “the goal is to attract the money supply and win customers” .

The office added that “it will facilitate transactions of the citizens in the same day when the cash deposit or provide a balance in the customer’s account.”

It started here and we will end it here. #Mosul Old city map update. The next few days we will see new tactics to retake Al-Nuri Mosque. 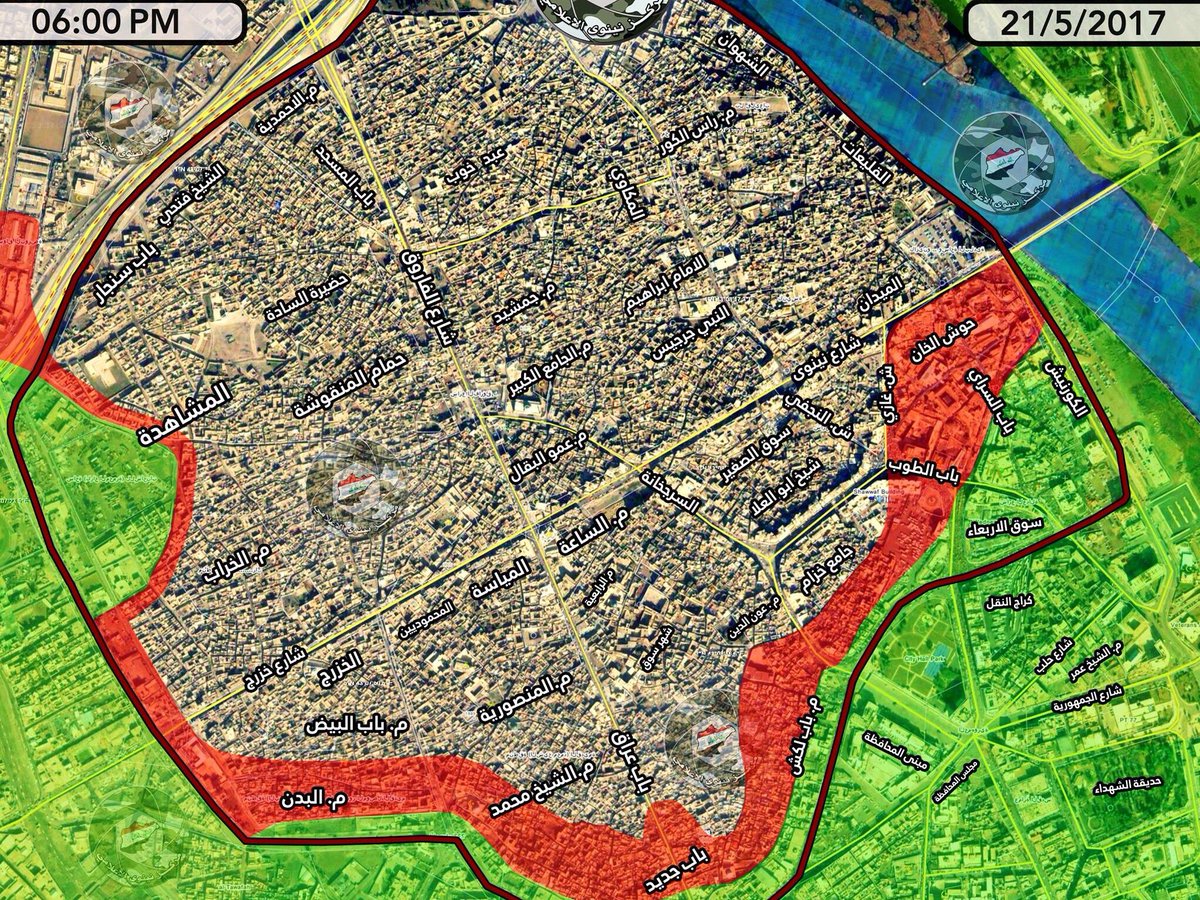 Iraqi forces continued their advance on the right-hand side of the city of Mosul on Sunday with lightningattacks on members of the Da’ash organization and managed to regain control of al-Hayah neighborhood , west of Mosul. And south of Kairouan, west of Nineveh province.The Directorate of Military Intelligence announced on Sunday the killing of the administrative governor of Nineveh and Raqqa in the Daqash organization during an air strike on the right coast of Mosul.

The directorate said in a statement that the radical leader of Daqash, Muhammad Mujbil al-Juwari, the coordinator of the operations of Daqash, was killed in a strike by the army in Zanjili area on the right side of Mosul, according to the information of the Directorate. He is the governor of Ninewa and Raqqa.A senior military source said that the Iraqi forces managed to liberate the second neighborhood of the health, adjacent to the revolution liberated a month ago, west of the city of Mosul, after a surprise attack on members of the extremist “Daqash” and sites to protect them.

For his part, the Federal Police Chief, Major General Raid Shaker Jawdat, said in a statement on Sunday that the federal police units managed to control the additive to the elements of “Daash” during the cleansing south of the neighborhood of July 17, noting that the forces have evacuated dozens of families besieged by that The neighborhood, the largest neighborhood on the right side of Mosul, and took them to IDP camps.An official security source said on Sunday that the federal police arrested three members of the “Daash” organization, who tried to flee from the Najjar area, northwest of Mosul, and hide among the unarmed civilian survivors, to flee to the liberated areas.

For its part, announced the “Badr” on Sunday, the liberation of the complex of Tel Qasab housing, north of Kairouan, and the villages of Tel Kessab and Ain Fathi North, in addition to the control of three car bombs, and a quantity of weapons, indicating that progress continues in the process launched since Saturday , And that the forces are moving in the direction of the objectives drawn with the “Imam Ali” combat.

In southern Iraq, a security source in the province of Basra, on Sunday, a security force of the second police emergency regiment, of the Directorate of Basra, and a participant in the sector of operations Samarra, arrested four wanted in accordance with Article IV of the law against extremism, indicating that the accused were Arrested as a result of the availability of accurate intelligence.

The source pointed out that the defendants were handed over to the intelligence and counter-extremism in Samarra, for interrogation.It is noteworthy that large military and security forces headed, about two years ago, from the province of Basra to the provinces of military operations against the organization, “Daash,” including the security force of the police emergency regiments, and another security force of the Federal Police, in addition to the 14th Infantry Division of the army, Its forces and formations.

In another context, the leader of the “Arab coalition,” Haider Mulla, on Sunday, that the agreements concluded recently between Saudi Arabia and the United States will work to confront the organization “Daash” and reduce the influence of Iran in the Arab world.He said in a statement that the security agreements signed by Saudi Arabia with the United States represent a strategic turning point in the “geopolitical” map of the Middle East and the beginning of a new era of alliances in the interest of stabilizing the political and security situation in the region.

He added that the political movement that has been crystallized for months between the Arab countries and the Gulf on the one hand, and the West represented by the United States on the other, is moving towards the international mobilization to confront the extremism of the “Daash” organization and the Iranian influence that penetrated the Arab region through the armed wings supported by The Iranian regime.He explained that this gathering is a ray of hope for the humanitarian community and the Islamic and Arab nation, which suffered from persecution and real setback in the past period, because of the growing phenomenon of extremism and militias.

The Saudi-American summit at the Al-Yamamah Palace in Riyadh concluded on Saturday with a wide range of agreements and memorandums of understanding covering various vital areas such as defense, energy and investment.