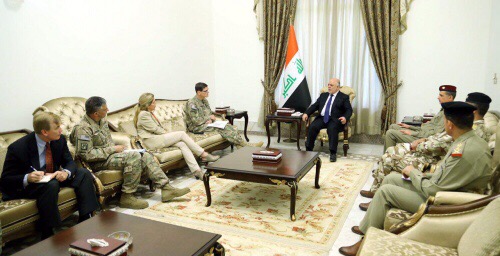 {Baghdad} Euphrates News Search Prime Minister Haider al-Abadi, on Thursday, with the Central US Central Command, the course of editing the city of Mosul operations.
A statement by the Prime Minister ‘s Office, the agency {Euphrates News} received a copy of it, that Abadi “received in his office on Thursday, Central US Central Command , General Joseph Votal and his accompanying delegation, was discussed during the meeting progress of liberalization of Mosul operations and victories achieved, arming and training of our armed forces in addition to the situation in the region. ”

The new General Votal, “his country ‘s support for Iraq in the fight against terrorism”, praising “progress and development of Iraqi forces and achieved victories over the terrorist gangs Daesh” .anthy