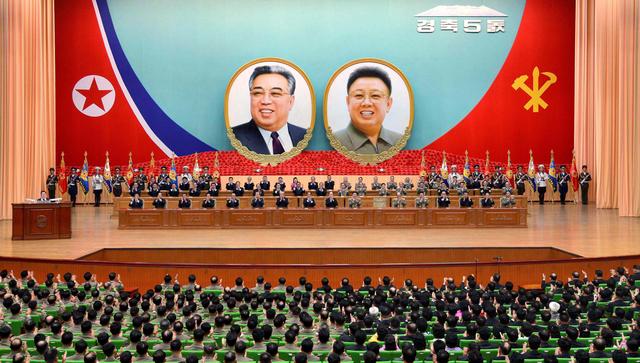 A general view of a national meeting took place to celebrate the 5th anniversary of leader Kim Jong Un’s assumption of the top posts of the party and the state, in this undated photo released by North Korea’s Korean Central News Agency (KCNA) in Pyongyang
April 12, 2017. KCNA via
REUTERS
By Sue-Lin Wong | PYONGYANG

Foreign journalists visiting North Korea gathered in Pyongyang for “a big and important event” on Thursday with tensions high over the possibility of a new weapons test by the isolated state and as a U.S. carrier group sails towards the Korean peninsula.

North Korea marks the 105th anniversary of the birth of the state founder Kim Il Sung on Saturday and in 2012 launched a long-range rocket carrying a satellite to mark the date. It tested a newly developed intermediate-range missile last year.

Around 200 foreign journalists are in Pyongyang for North Korea’s biggest national day called “Day of the Sun”. Officials gave no details of the big event and similar announcements in the past have been linked to relatively low-key set pieces.

Tensions on the Korean peninsula mounted this week as the White House said U.S. President Donald Trump has put North Korea “clearly on notice” that he will not tolerate certain actions and China urged a peaceful resolution of the tension.

Trump has diverted the Carl Vinson Strike Group to near the Korean peninsula, from a planned port call in Australia, in a show of force aimed at deterring North Korea launching another missile. The group is expected to take up to nine days to arrive, U.S. officials have said.

On Tuesday, North Korea warned of a nuclear attack on the United States at any sign of American aggression. The North is technically at war with the United States and south Korea after the 1950-53 Korean War ended in a truce and not a peace treaty.

The North regularly threatens to destroy both countries.

Trump and Chinese President Xi Jinping spoke by telephone on Wednesday, just days after they met in the United States for the first time, underscoring the sense of urgency given concerns that the North could soon conduct a weapons test.

Trump said on Twitter that his call with Xi was a “very good” discussion of the “menace of North Korea”. Trump said later on Wednesday the United States is prepared to tackle the crisis surrounding North Korea without China if necessary.

Xi stressed that China was “committed to the target of decentralization on the peninsula, safeguarding peace and stability on the peninsula, and advocates resolving problems through peaceful means”, Chinese state broadcaster CCTV said.

South Korean officials said on Thursday there were no new signs to indicate a North Korean nuclear is more imminent but said the North has maintained a state of readiness to conduct such a test at any time.