Baghdad – Journal News
The military information cell announced on Monday that 50 terrorists were killed by air strikes as they crossed from Syria to Iraq.

The cell said in a statement that “according to the information of the Federal Intelligence and Investigations Agency, the Air Falcons carried out several air strikes that resulted in the targeting of a gathering of elements calling for the terrorist in the area of Balig south-west of Tal Afar as they tried to cross from Syria and his losses, killing about 50 terrorists and the destruction of 10 wheels of different types Including heavy and agricultural mechanisms and the burning of some of the headquarters encircled within the end of their gathering and their intention to make the area of the center of Blegg towards the operations.

The statement concluded, “It also destroyed the grave of the elements of the Daash and Babel operations room in full with the killing of a number of terrorists in the area of Mahalip in Mosul.”

Baghdad «Quds Al- Arabi»: the source of the Sadrist movement , told «Al Quds Al Arabi», on Monday, said that «most enemies who are trying to get rid of the chest is the Dawa party leader Nuri al – Maliki, who stands chest stumbling block in the way of his attempts to return to the prime minister, and it incites against the Shiites and blame him for the collapse of the situation in Iraq ». It was al- Sadr, has revealed, on Friday, the existence of assassination attempts of mafia corruption and sectarian strife.

The source, who declined to be identified, said that «the current leaders, emphasizing intentions to liquidate the chest by professional groups affiliated to political forces of information, because of the positions of whales corruption who announced al- Sadr leadership of the masses and stand strong and determination in her face, to bring about change and reforms in conditions country ».

According to the source «many of the militia leaders are not comfortable with the positions of the chest of the popular crowd, especially recently by calling for a solution to the crowd after the completion of the organization« Islamic State », while they want them and Iran, and that the crowd a political role and security, economic and widely used in the Iraqi scene». And escalated the reactions and attitudes of political and popular forces, against the backdrop of detecting the cleric attempts to assassinate him, amid fears after the announcement of his followers not to be tolerated any ill affects their leader.

He was president of the National Alliance, Ammar al – Hakim, he expressed concern about the «threat to the life» chest, warning «sliding security is calculated».

A statement from his office for the wise saying: «We followed with great interest the letter of Mr. Muqtada al – Sadr in last Friday, and we declare our support for all reform projects aimed, we express our concern what is stated in the letter of references to serious threats against his person Karim security».

Hakim «concerned the Sadrist movement, to inform the National Alliance, the competent government bodies, those threats».

He also called « the government and security agencies concerned to take the necessary actions and measures for the protection of Mr. Muqtada al – Sadr, and other political leaders and to prevent any security sliding knee – jerk». It saw Alhananp area, in Najaf , where Sadr ‘s headquarters, a rally of his followers.

Sadr and his followers alive, describing them as «loyal and thanked them for their attitude and their willingness to sacrifice for him and for the continuation« revolution of reform ». Sadr ‘s followers and raising banners and chanted slogans in favor of it. Also, al- Sadr ‘s supporters organized demonstrations in Baghdad and Basra and Muthana.

He stressed Ibrahim al – Jabri, head of the Sadr office in Baghdad, in front of the demonstrators, the latter has the «soldiers conscripted» in Iraq and abroad, and considered that the chest «remain» in spite of who he described Balvasudain and «Trinity fateful».

He added: «not having to Iraq without Almguetdy, Valmguetdy remains despite the corrupt and sinister Trinity.

He accused the MP for the Liberal bloc, Majid al – Gharawi, foreign countries of being behind the death threats chest. He explained that «foreign countries are behind these threats with the help of internal political figures», indicating that «those threats came after the reform project put forward by al- Sadr».

In addition, the MP said the mass change (Kurdish), Serwa Abdul Wahid, that « al- Sadr launched a word of truth and putting the blood on the contours», and declared its support » to stand with him to the fight against corruption and the corrupt».

It noted, in a statement, that « a few right in Iraq, today launched Moqtada al – Sadr ‘s word of truth in Tahrir Square, putting blood on contours, Fethiye estimating and pricing for this Iraqi commander of the brave who expresses everything that beats in the hearts of Iraqis from Zakho to Basra».

He continued: «as much need to leaders like you in Kurdistan and Baghdad, Basra and Anbar and Mosul».

As announced governor of Najaf , Luay al – Yassiri, the local government in the province would bear full responsibility for protecting the chest of any dangers, saying that al- Sadr ‘s Reform Project «Oqz corrupt the sleep of those who will not like them pal only to silence the voice of righteousness and reform», the Iraqi Interior Ministry confirmed that it «will spare effort to secure the protection measures for the leader of the Sadrist movement about what has recently been trading about the threat he endured, as well as its efforts to secure the lives of all citizens. »

The ministry statement said that «Interior Minister Qasim al – Araji discussed in his office, with the chairman of the parliamentary security and defense of quitting a number of security issues, including the ministry ‘s procedures about what has recently been trading about the threat he suffered chest».

Al- Sadr has taken a series of positions that created him many enemies and foes, including his demonstrations demanding reform and the fight against the corrupt. He also drew harsh criticism to leaders of the National Alliance (Shiite) calling for change them for alleged corruption and failure.

He also criticized some of the militias , which he described as «uncontrolled» and demanded to dissolve the «popular crowd» in the future. 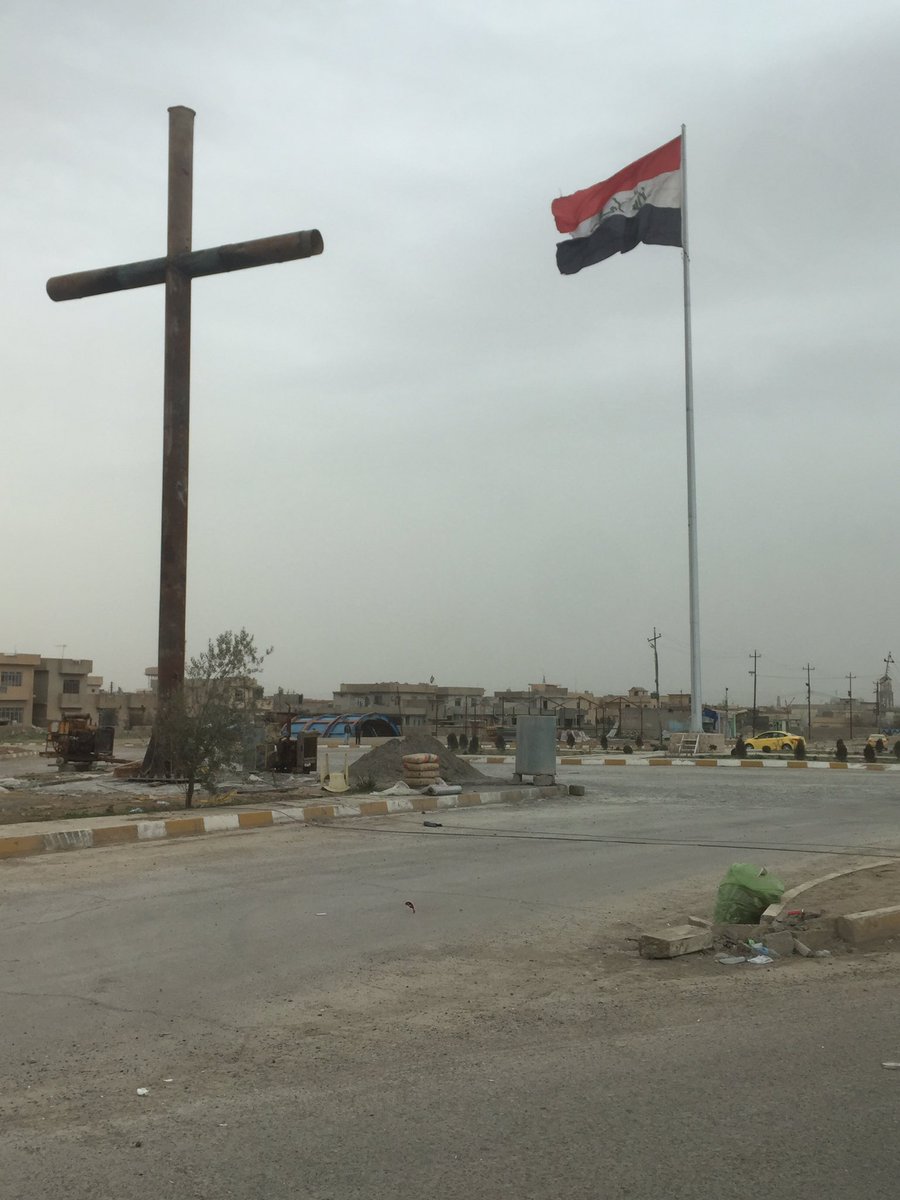 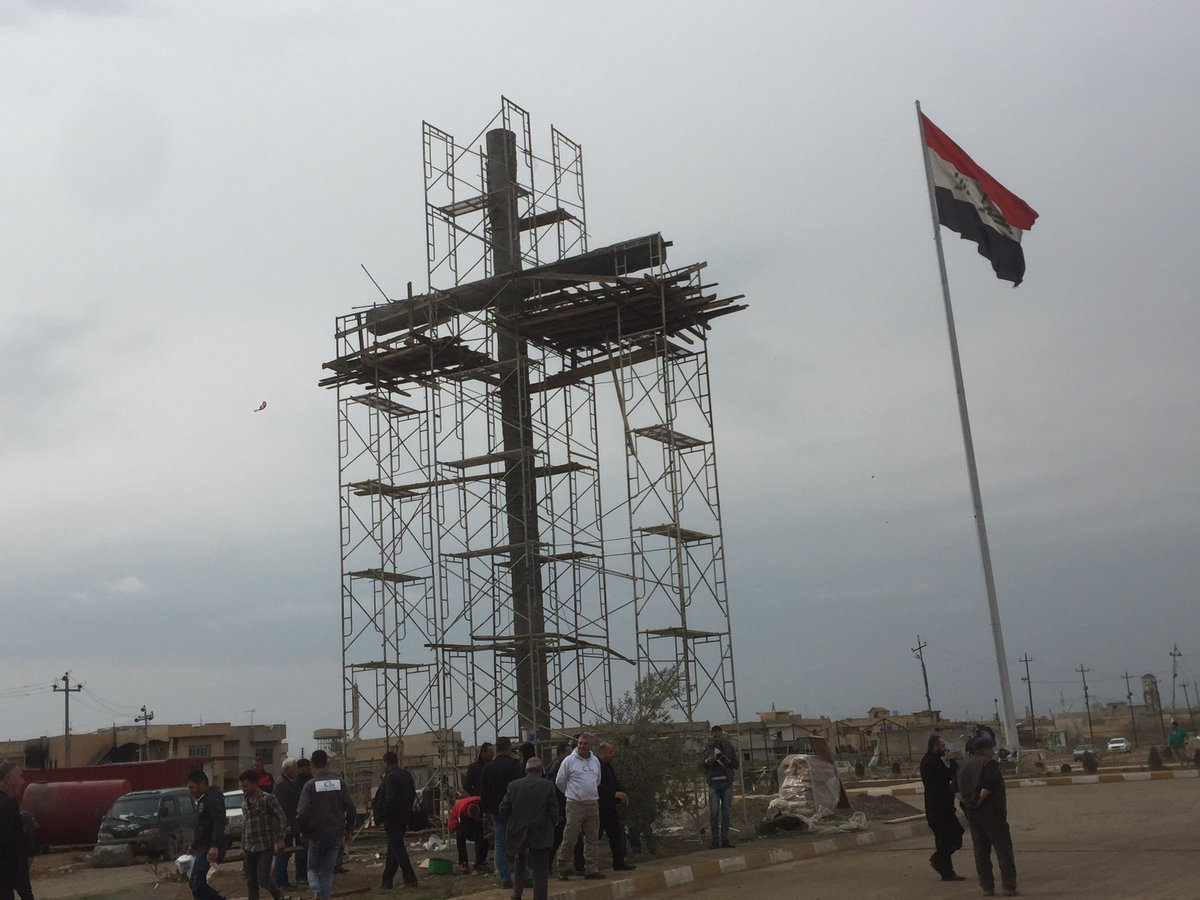 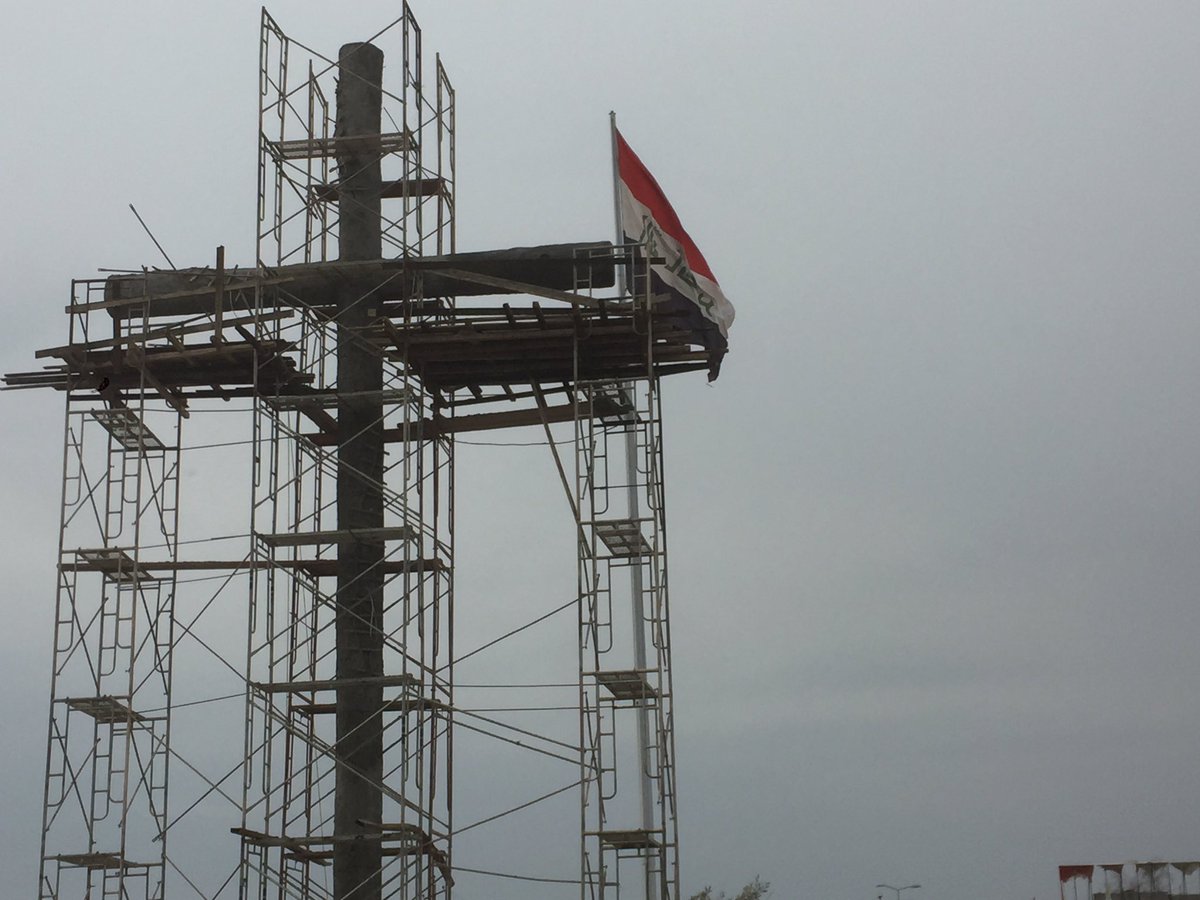 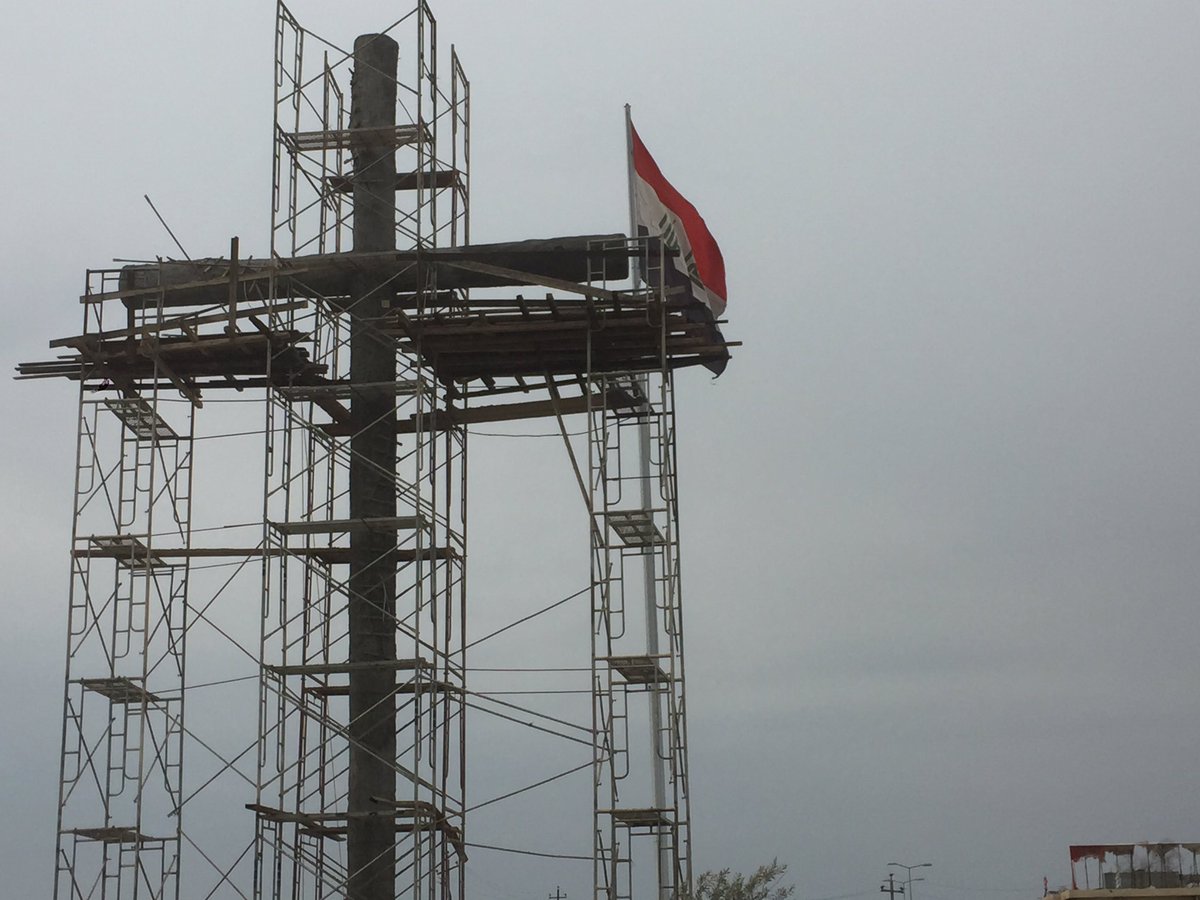 BAGHDAD (Reuters) – An unspecified number of US military personnel are heading into northern Iraq to take part in the battle in Mosul, the Millitary Times newspaper reported Monday.

“US forces belong to the 82nd Airborne Division, specifically the 2nd Brigade Combat Team at Fort Bragg, based in California,” the newspaper said in a statement.

“The 1,700-strong combat brigade has already been deployed between Iraq and Kuwait and it is not clear whether the new deployment orders will be applied to the 2,500 soldiers remaining at Fort Bragg,” she said.

“Officials are reluctant to deploy troops on the border between Iraq and Syria by announcing that the deployment is temporary rather than permanent, according to US officials who declined to be identified. No soldiers will be deployed to Syria, targeting Mosul and focusing on a preacher. Separate to Syria at the request of the Pentagon. “

The US Defense Department estimates that the number of “Da’ash” elements remaining in Mosul is estimated at 2,000, which is lower than the previous figure of 3,000 to 5,000.

Baghdad / Al-Ghad Press:
Prime Minister and Commander-in-Chief of the Armed Forces Haidar al-Abadi on Monday discussed with US Army Chief of Staff General Mark Milie the battle to liberate Mosul’s right-hand side and train the security forces, while Milley affirmed his country’s support for Iraq in its fight against terrorism.
“Prime Minister Haidar al-Abadi received in his office today the Chief of Staff of the US Army General Mark Millie and his accompanying delegation, and discussed with them the course of the battle to liberate the right side of Mosul and to train and equip them,” the statement said. Iraqi armed forces and develop their capabilities. “
General Mark Millie said that his country’s continued support for Iraq in its fight against terrorism, praising “the professionalism of Iraqi forces and their admiration for the development of their capabilities.”
The joint forces, including the army, the anti-terror apparatus and the popular crowd, are engaged in fierce battles to restore the right side of the city of Mosul and expel terrorist elements. 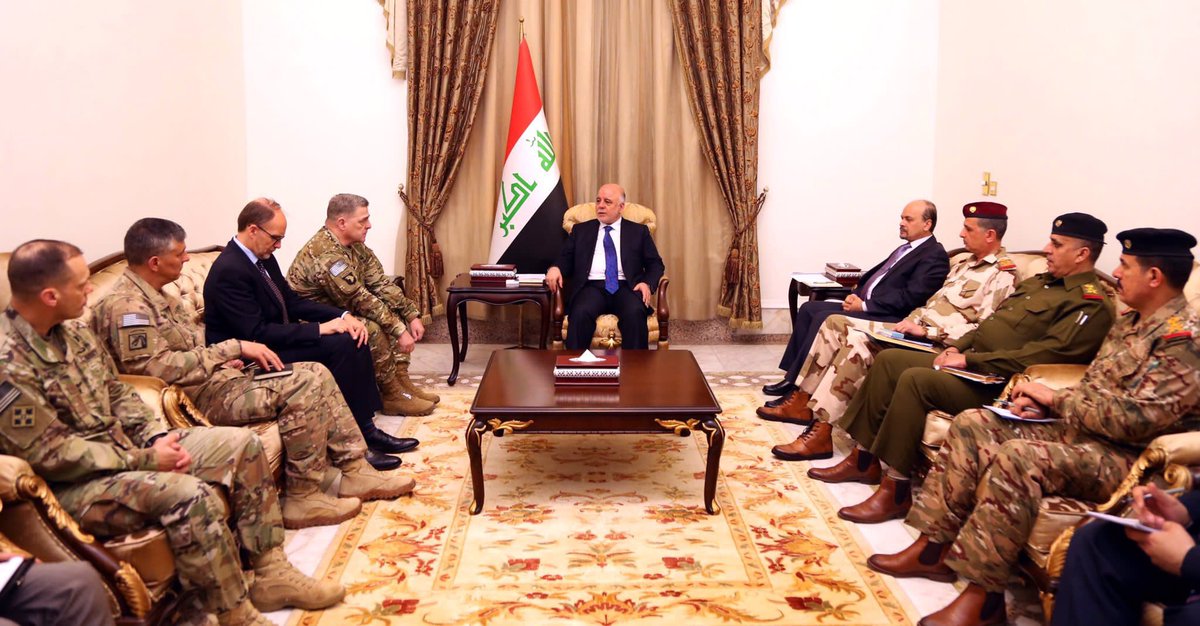 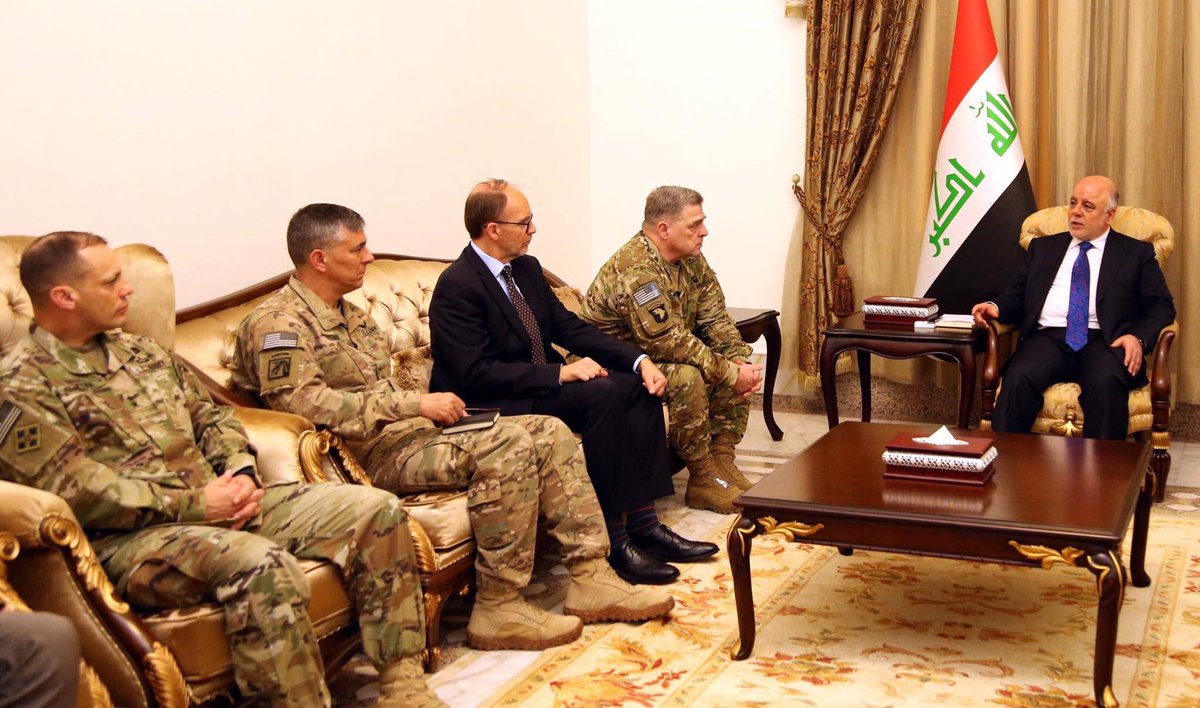 Twilight News / revealed Kurdish deputy, on Monday, that the Iraqi Prime Minister Haider al-Abadi said in a meeting with parliamentary blocs that Baghdad would send all financial dues Pflahi province of Kurdistan.

She said a member of the economic and investment commission in the lower house MP for the Kurdistan Alliance Najiba Najib told a news briefing that the Abadi pledged during a meeting yesterday with the parliamentary blocs to send financial Almostagqat to peasants province.

Najib added that the Secretary General of the Council of Ministers told her that Milia entitlements for farmers had been delayed much afterthought he stressed that the remaining funds for farmers to send them as soon as possible.

Najib pointed out that of the total 460 billion dinars from the amounts the private wheat Pflahi the province last year payout in 2016 of which 223 billion and 700 million dinars, pointing out that the amount would arrive soon to the region.

Baghdad / Al-Ghad Press:
The House of Representatives announced on Monday its agenda for its session, which is scheduled to be held at 11 am tomorrow, indicating that it will discuss the events of Mosul, hosted by the ministers of defense and interior, pointing out that he will vote on the draft law holidays.
“The agenda of the session of the Council of Representatives for its session scheduled for Tuesday will include a general topic of discussion on the events of Mosul and the report of the committees (security and defense, human rights), with the hosting of the Minister of Defense and the Minister of the Interior, (The Committee on Youth and Sports, the Legal Committee, the Committee of Civil Society Organizations, the Committee on Health and the Environment), 23 Articles “.
“The table includes the vote on the draft laws of public holidays.” (Committee on Religious Endowments and Religious Affairs, Committee on Culture and Information, Legal Committee) (6 articles), and vote on the draft law on the seizure and confiscation of movable and immovable property belonging to the pillars of the former regime. Accountability, Reconciliation and Justice, Finance Committee, Legal Committee) (Article 9).
The statement also said that “the table also includes the voting on the origin of the formation of a commission of inquiry regarding the kidnapped and the following committees (security and defense, human rights, legal and the deputies of the provinces to which the abductees belong Anbar province, Salahuddin province, Baghdad province, Diyala province, And the belt of Baghdad), and a general topic of discussion on the security situation in the Sinjar district and the report of the committees (security and defense, and regions and governorates not organized in a region).
He pointed out that “the agenda of tomorrow’s session also includes the first reading of the proposed law of the operation of the first graduates (the Committee on Higher Education and Scientific Research, the Finance Committee) (10 articles), and the first reading of the proposed law on the protection of teachers and teachers. (Article 5), in addition to the quarterly activity report of the Higher Education and Scientific Research Committee, and the quarterly report of the Integrity Committee. 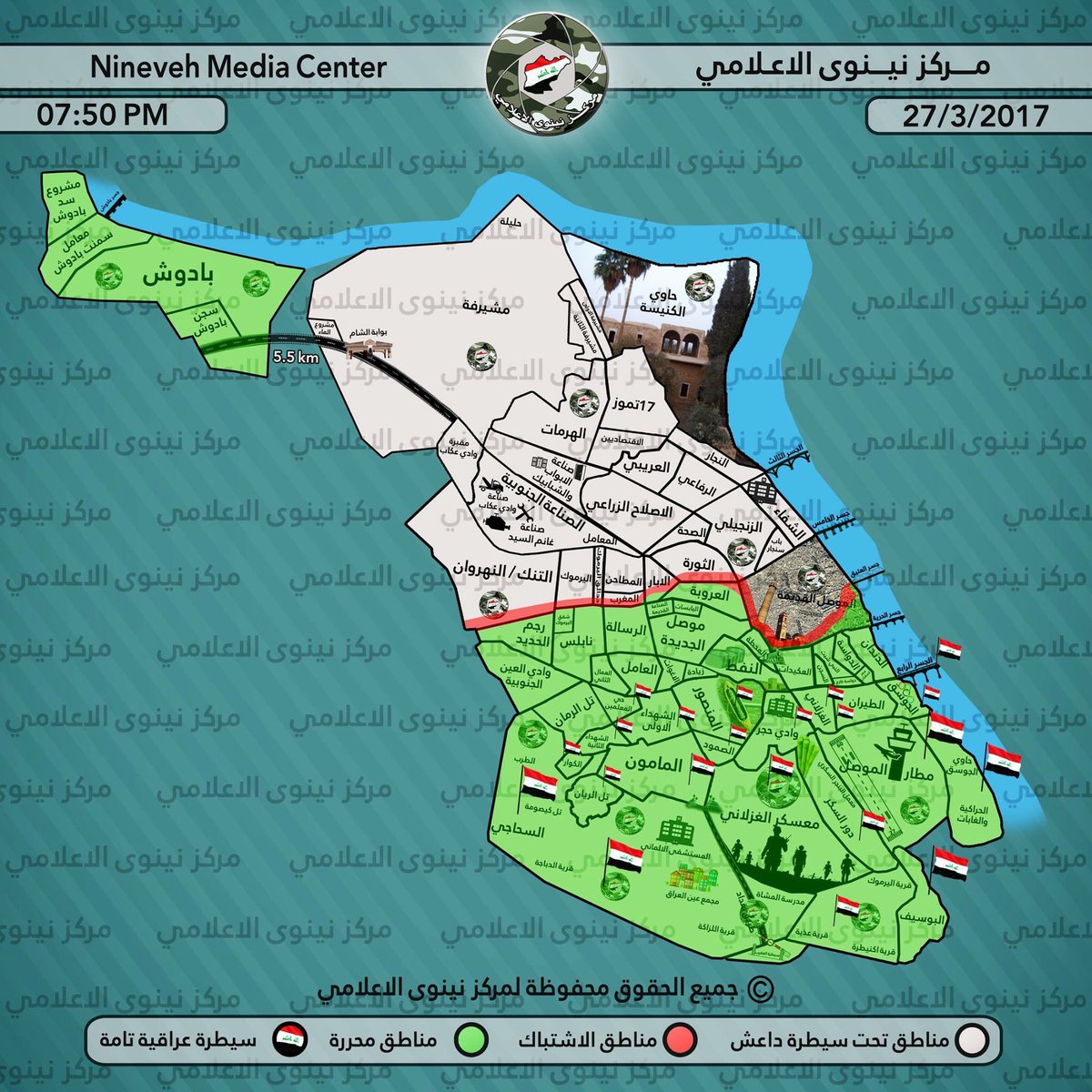