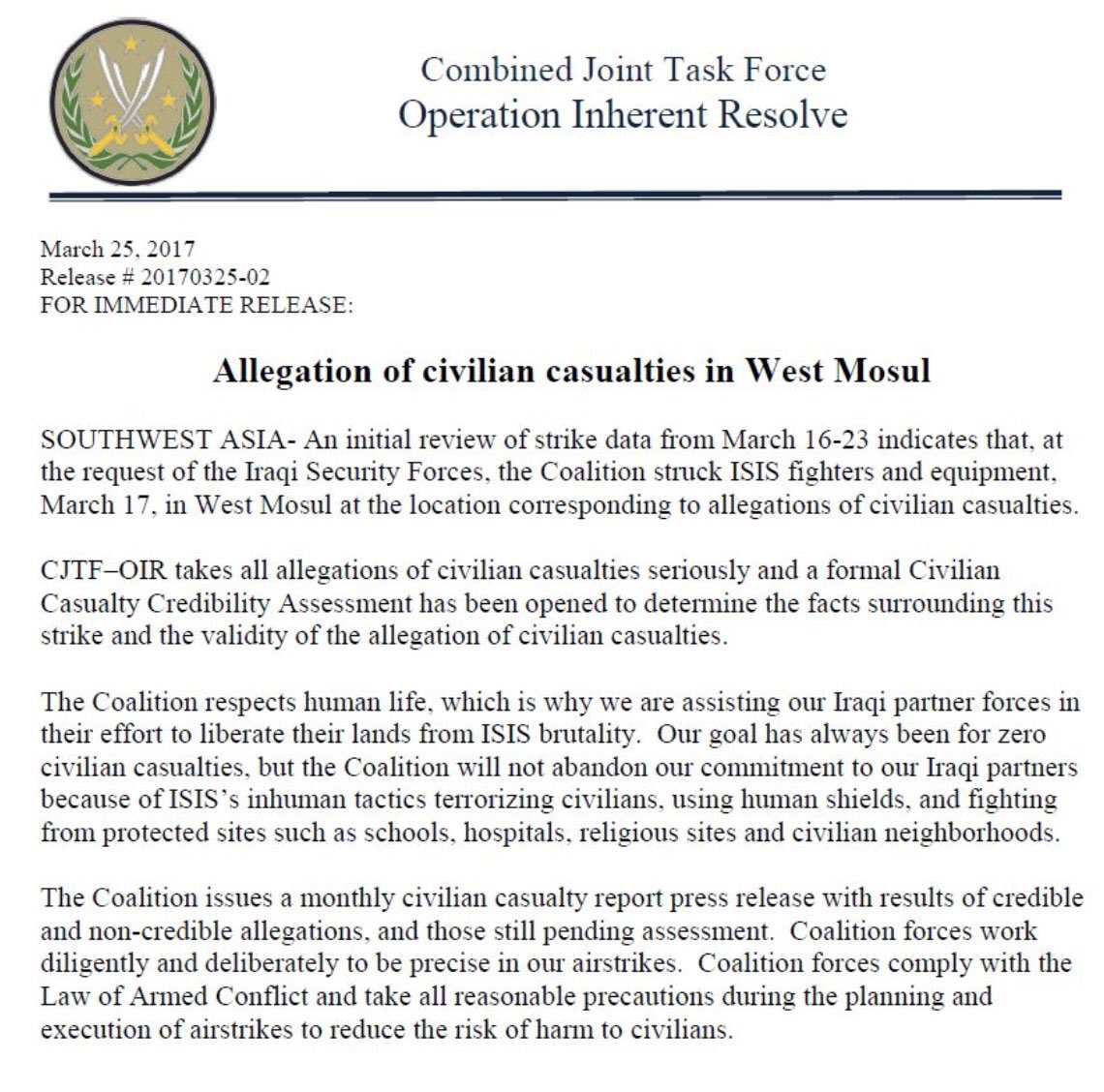 IMPORTANT #Iraq PM @HaiderAlAbadi with ALL #PMU commanders to assure them that PMU is a an official force part of Iraq security institute. 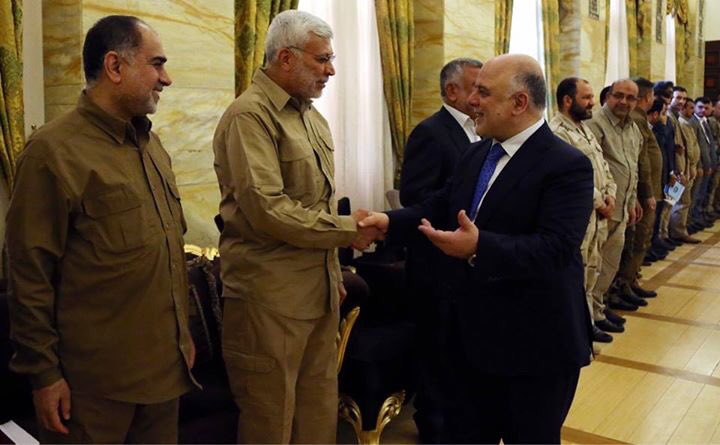 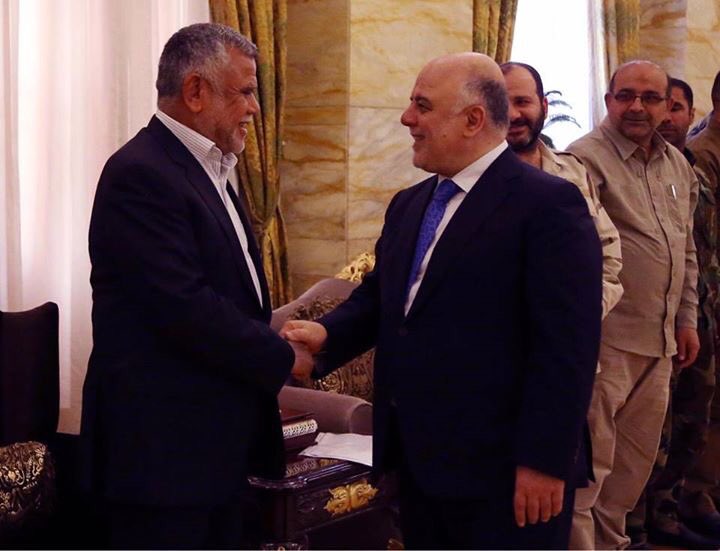 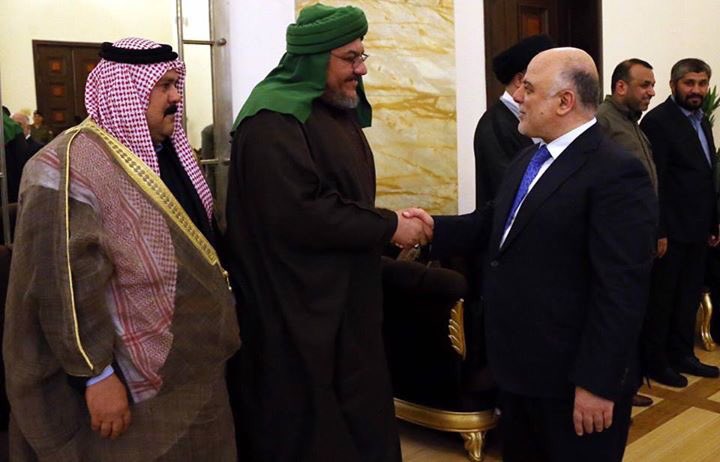 Its the battle of the snipers near Al-Nuri Mosque in the old district in #Mosul. This is where is all started and here it will end!! 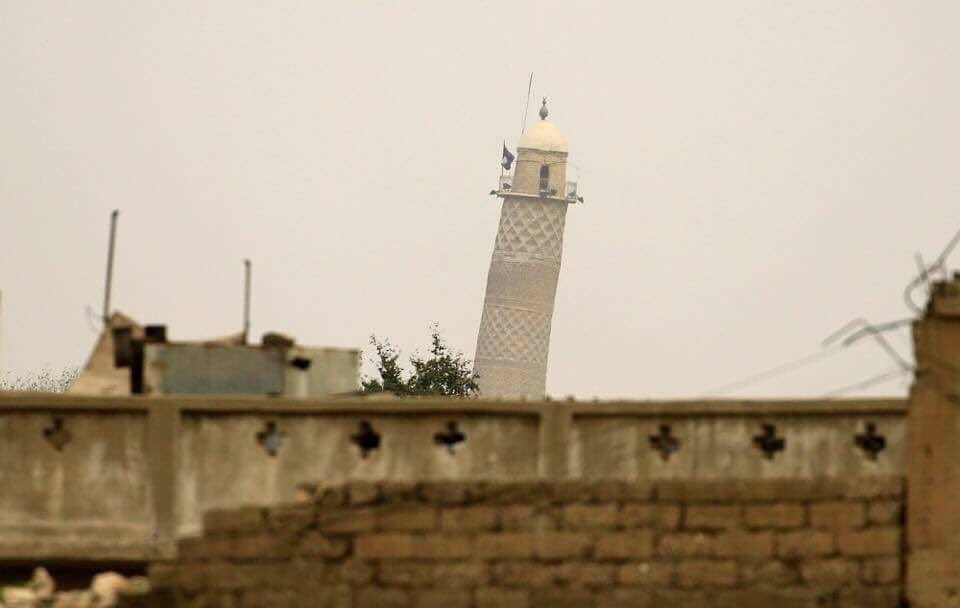 Military intelligence announced the killing of three of the most prominent leaders of the Arabs to support an Iraqi air strike west of Mosul.

An intelligence statement said that “based on the information of the Directorate of Military Intelligence, air force planes destroyed a site of leaders, most of them Arab and killed the most prominent leaders, namely the terrorist Abdullah al-Hiaf, nicknamed Abu al-Harith, a Saudi additive additive and Khalid Mohammed Hazza al-Shammari, And the terrorist Abdul Rahman Murad Murad al-Dulah, administrative officer of the Al-Baaj district, with an air strike in the Al-Baaj district, Al-Thawra district, west of Mosul. “

Iraqi Prime Minister Haider al-Abadi is scheduled to participate in the Arab summit in Jordan and will focus on six files according to informed sources.

As well as the strength and unity of the people. “

The sources added that “Abadi will also put forward an Iraqi project to coordinate security against terrorism among the Arab countries to replace the joint defense agreement, and to move towards the request for support and contribute to the reconstruction of Iraq after the urging.”

The project will also put forward the Arab economic investment inside Iraq and the networking of Arab relations on an economic basis.”

The anti-terrorism forces stormed the Orouba neighborhood on Saturday and seized a mosque on the right-hand coast of Mosul, local sources said.

The sources said in special statements to “Sky Press” that “the forces of the anti-terrorism forces stormed the neighborhood of Araba south of the city of Mosul.”

The forces “managed to free the Abu Zayyan mosque and is now fighting battles against remnants of an organization calling for the full restoration of the neighborhood.”

one hour ago
Last updated
The time now is 09:02 PM

Al-Ghad Press:
As the Iraqi forces approach the perimeter of the Grand Mosque of Nuri in the old city of Mosul, Abu Bakr al-Baghdadi’s dream of an Islamic state, which includes a large measure of Iraq and Syria, is lost. As the fate of the organization’s leader remains unknown, the city has been transformed into ruins that smell of death.
The fighters have shown great resistance in the face of Iraqi forces to retain the mosque, which saw the emergence of the organization’s leader for the first time to announce his succession in 2014, by deploying his sniper on the roofs and booby traps between the narrow alleys, which transformed the buildings and houses of this region to the objectives of the strikes of the International Alliance for The past days, despite their overcrowding.
Houses in the neighborhoods of the Grand Mosque and the new Mosul on the western side of the city have turned into mass graves of people protected by the militant organization as human shields.
Civil defense volunteers and medics, dressed in medical masks and carrying shovels, are struggling to recover bodies from rubble in the new city of Mosul, whose houses are surrounded by heavy shelling.
“The resurrection has taken place in the new city of Mosul. You can not remove all these bodies from the rubble,” said Basma Basim, head of the Mosul district council.
“Hundreds were buried under the rubble of their homes, and their dreams and aspirations faded away.”
“The current efforts are not enough to recover hundreds of bodies from the rubble, and the city turned into a second Cuban, and everyone has their responsibilities.”
“The situation in the city is very tragic,” said Mohamed Elias, a 37-year-old relief worker. “We receive daily distress calls from entire families who were buried in their homes.”
“The houses in the new Mosul have been turned into mass graves for civilians,” Elias said.
The large-scale military campaign to restore the old city on the western side of Mosul over the past two days has slowed down due to poor weather conditions and the inability of the coalition’s international airliners to target sites that have helped evacuate hundreds of besieged families into safe areas.
“They are fighters who are being killed to prevent Iraqi forces from entering the Nuri Mosque, where our forces are only hundreds of meters away,” said a fighter in the federal police, whose forces are besieging the area.
“They blew up all the roads leading to the mosque in the old area and deployed snipers on rooftops to block the advance of Iraqi forces,” he said.
“Baghdadi has fled the battle and left his fighters facing death on their own, it is only a matter of time to get Mosul back from the grip of these,” he said, referring to the fighters of the organization calling.

Looks like there was no real pause in ops in #Mosul, just a small lull in the fighting. #Iraq‘s forces still advancing in the city centre. 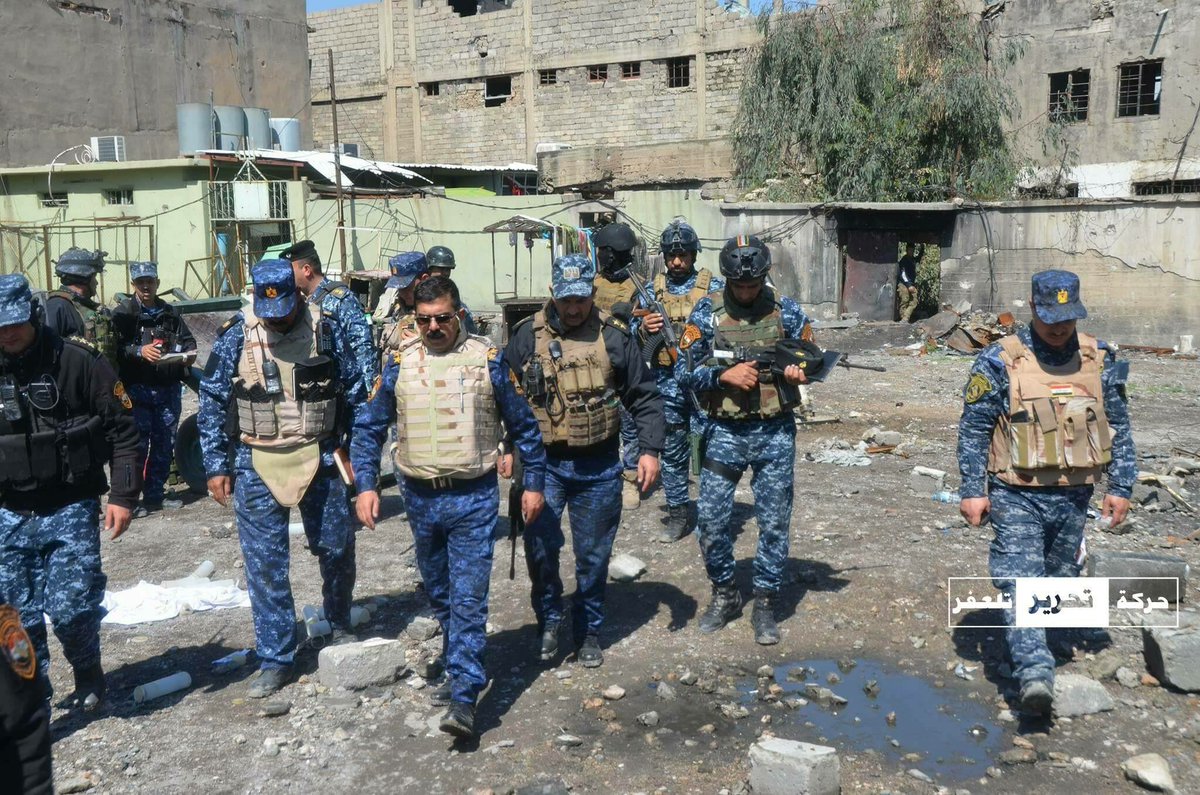 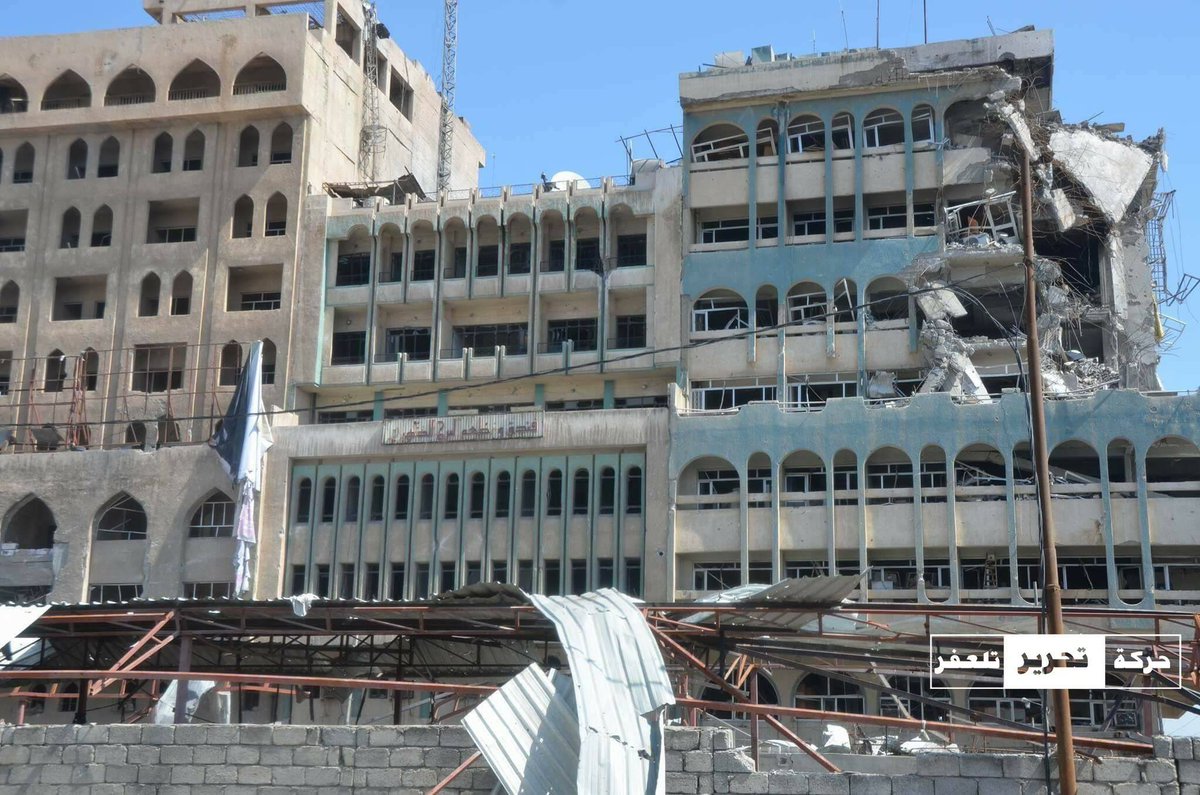 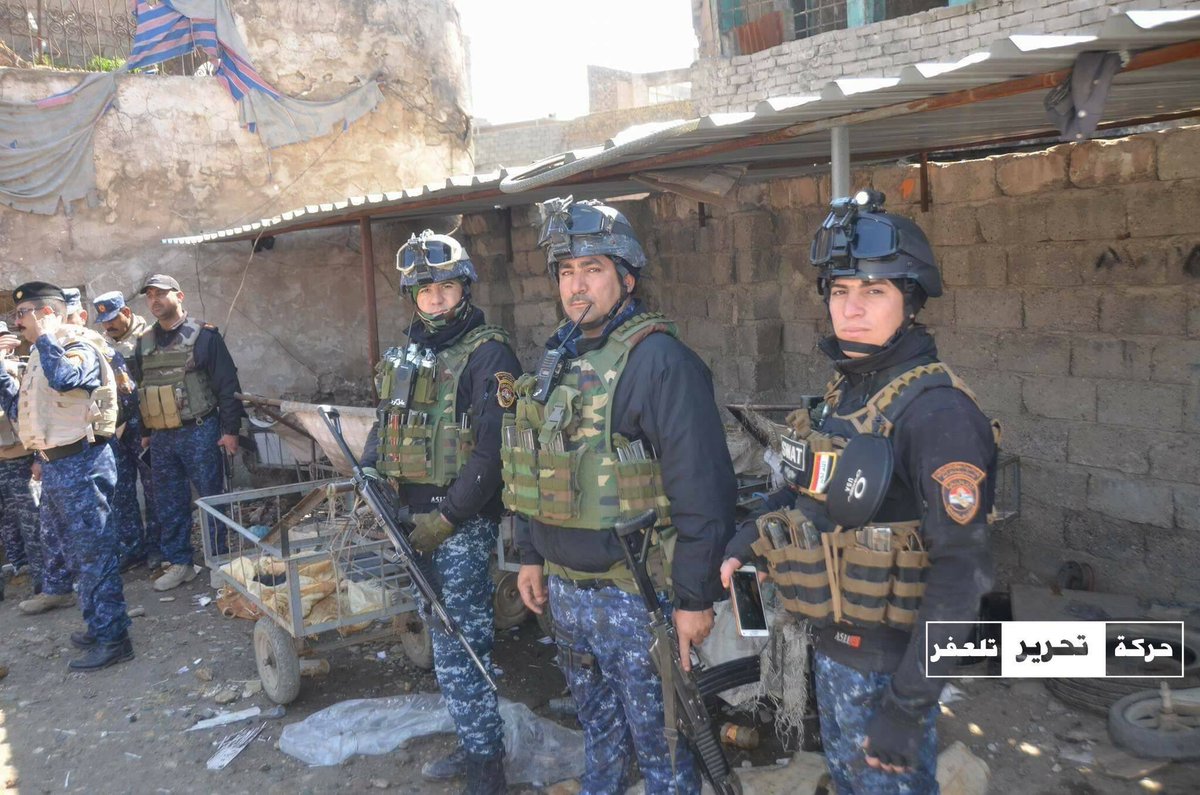 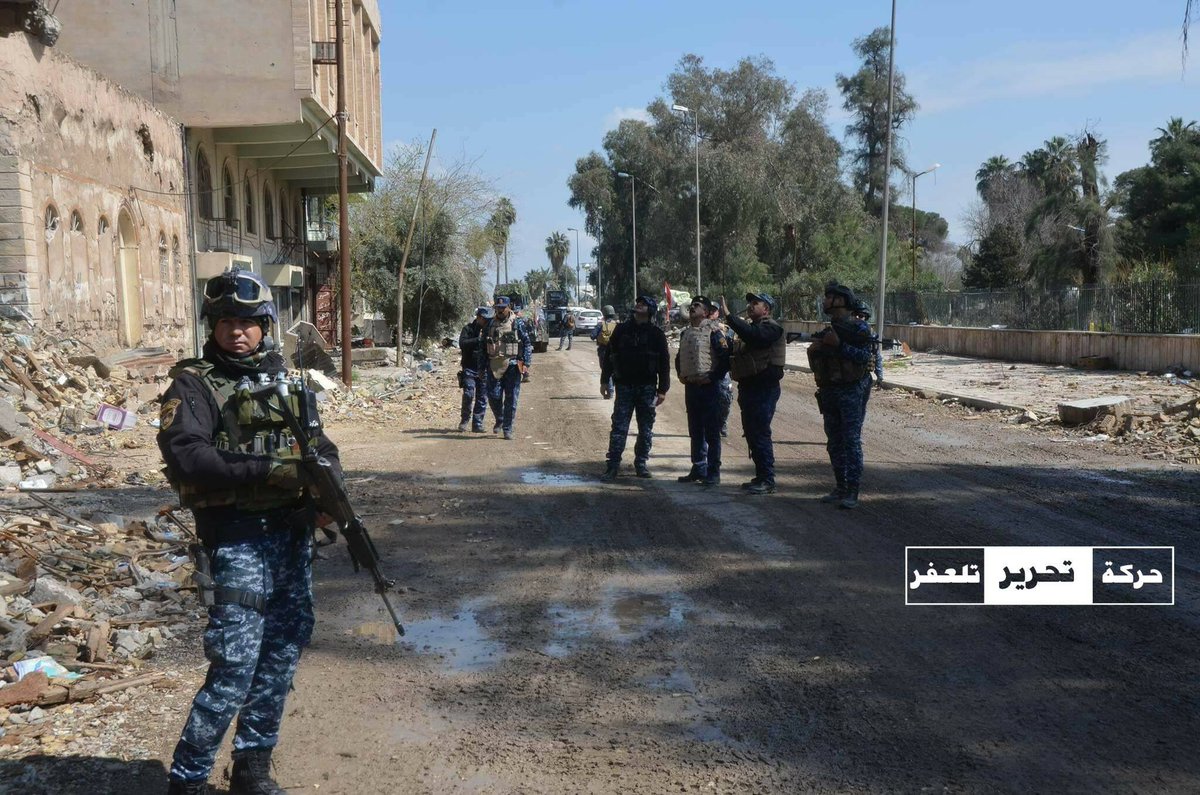 IMPORTANT: #Iraq‘s armed forces have finished their preparations for the liberation of Tal ‘Afar and will begin advancing very soon. 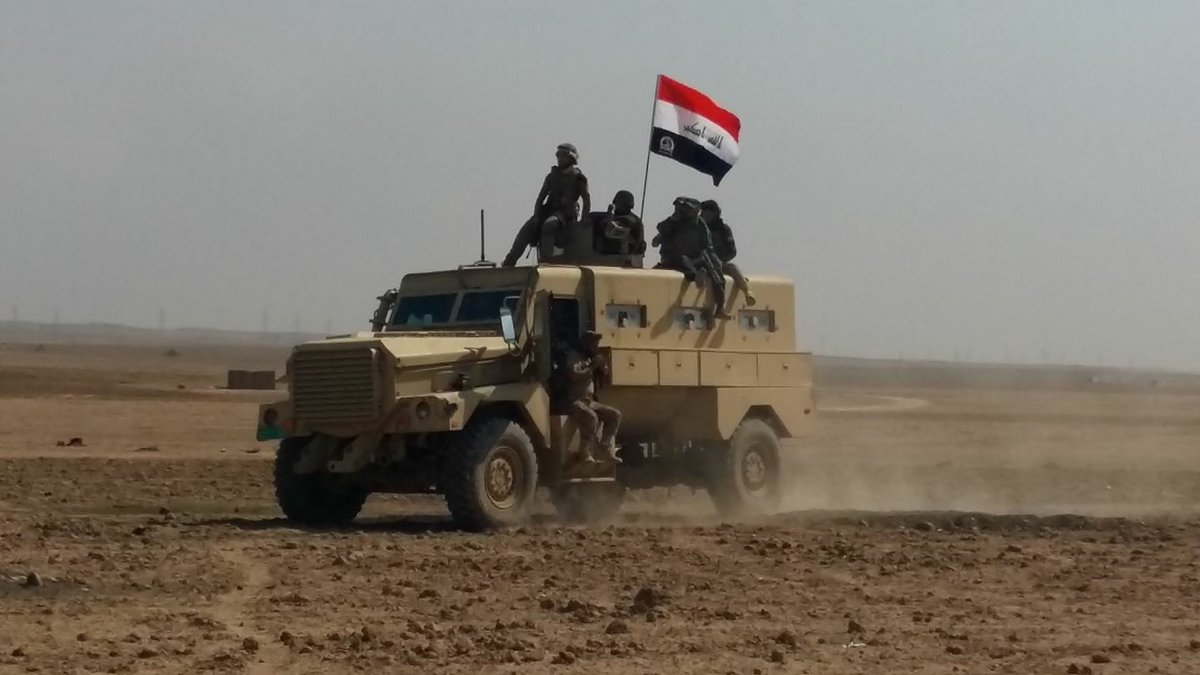