After our conversations, Iraqi PM @HaiderAlAbadi signed the guest book at the Vice President’s Residence at the Naval Observatory. 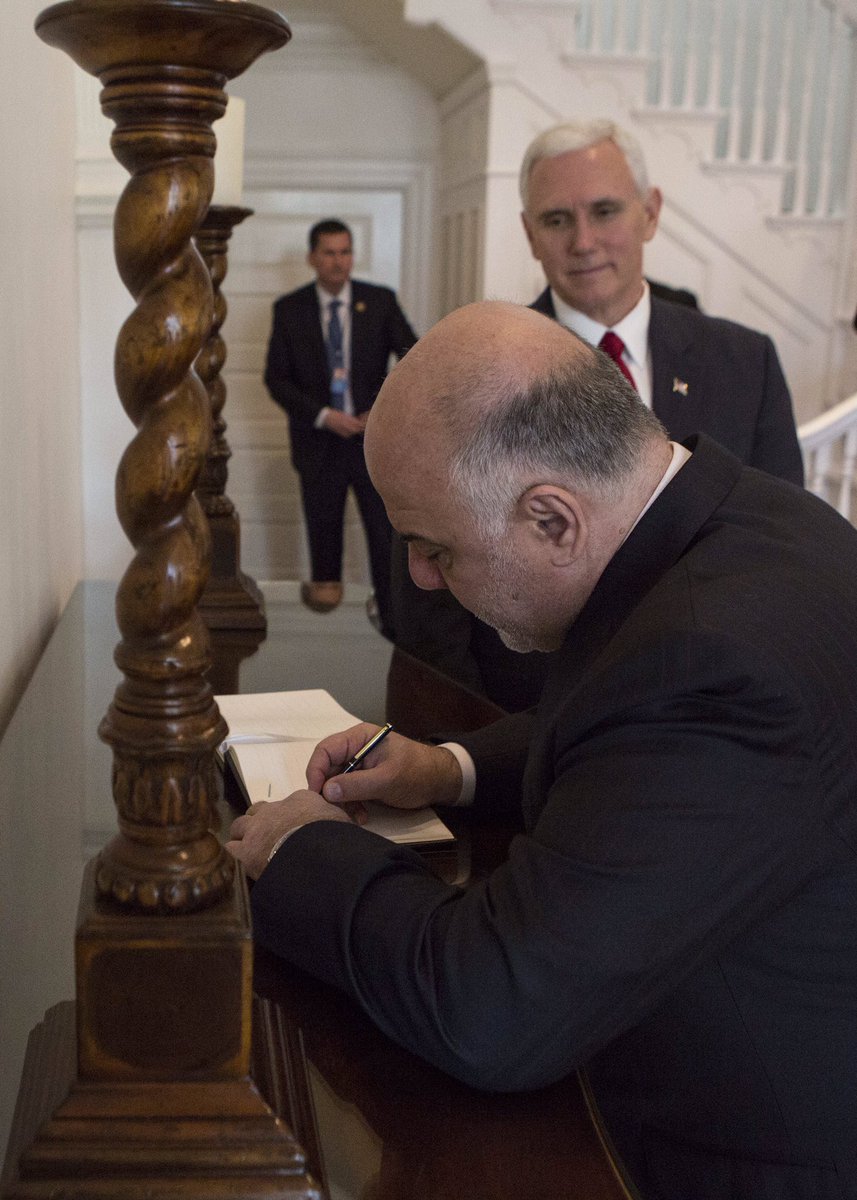 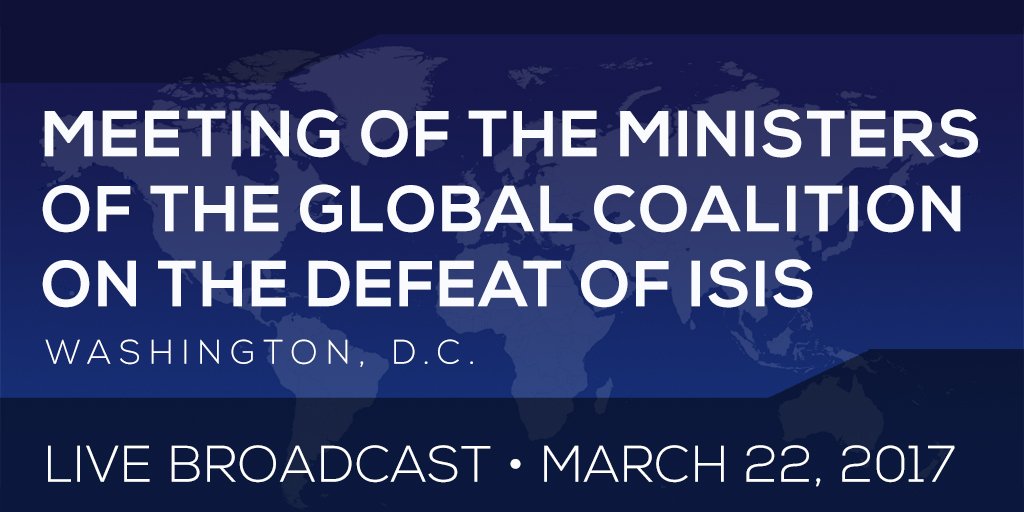 In the presence of a representative of the Kurdistan Region

While the coalition forces are fighting in the city of Mosul, which left only a few of them with the grip of the militants of the organization as the Iraqi forces advance. As the coalition approaches the siege on them in Raqqa, the US State Department will host in Washington on Wednesday 22 March , A meeting of representatives of the 68 member states of the International Alliance against the organization of a preacher, headed by US Secretary of State, Rex Tilerson, which will be the largest coalition since the international formation.

Foreign ministers and senior officials from 68 countries and international organizations are invited to attend the two-day meeting and will be the first full coalition meeting since December 2014.

“This year, the Kurdistan Region was officially invited to participate in the meeting of the representatives of the countries of the International Coalition against Dahesh,” Falah Mustafa told Basnews after our criticisms of not inviting the region to this meeting last year.

Since taking office, US President Donald Trump has been reviewing a military strategy to destroy an organization that is urging and accelerating the war against him. He was handed over to a secret file on the subject last February.

Tilerson and his counterparts will lead political action to prepare the ground for stabilizing Iraq and Syria after the last two terrorist strongholds in Mosul and Raqqa were destroyed.

State Department spokesman Mark Toner told reporters that “Secretary Tillerson was clearly clear that the defeat of the Dahesh organization is the priority of the Foreign Ministry in the Middle East.”

“The defeat of the Da’ash organization is the beginning of a process leading to stability in Syria,” he said, adding that the meeting would be the largest of the international coalition since its formation.

The ministers will be briefed on progress in the field and will seek new ideas to combat the organization’s propaganda on the Web that helps them recruit fighters.

On 23 March, a working group of military officials will be formed from the ministerial meeting to draw up plans.

{Baghdad} Euphrates News Search Prime Minister Haider al-Abadi {who is visiting Washington now}, and the chairman of the US House of Representatives international support for Iraq against terrorism.
A statement by the Prime Minister ‘s Office, received by the agency {Euphrates News}, a copy of it, that Abadi “met on Capitol Hill, chairman of the US House of Representatives Paul Ryan, During the meeting , they discussed the overall situation and relations between the two countries and the progress of the battle to liberate Mosul and restore stability and displaced persons to the liberated areas and international support for Iraq in the war against terrorism, in addition to the economic and financial situation in Iraq with the fall in oil prices. ”
The Chairman of the US parliament, according to the statement, “congratulations on the victories achieved Daesh terrorist gangs” and praised “the contribution made by the Iraqis in their war against Daesh.”
He stressed ” the importance of the relationship between the two countries and work on the promotion and support of his country for Iraq in its war against terrorist gangs” .anthy
http://alforatnews.com/modules/news/article.php?storyid=140284

Fuad Hussein, chief of staff to the KRG president, met with US President Donald Trump in Washington. 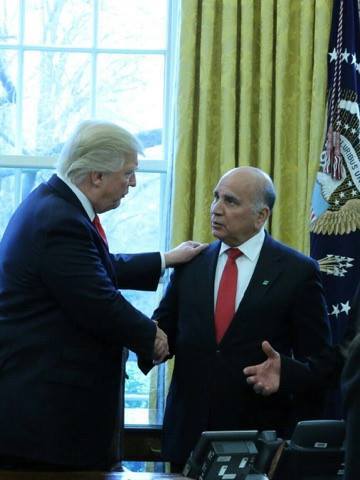 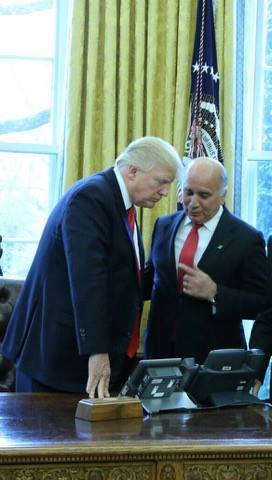 Baghdad – Journal News
The International Monetary Fund, Prime Minister Haider Abadi renewed the support of the Fund for the Iraqi government’s reform measures, while Abadi to proceed to correct the economic tracks wrong.

The Office of Abbadi said in a statement that “the Prime Minister received at his residence in Washington, the delegation of the International Monetary Fund,” noting that “the delegation renewed its support for the reform measures carried out by the government and the success of Iraq to carry out these reforms,” asserting ” “He said.

Abadi went to the United States at an official invitation from US President Donald Trump. The agenda includes US administration officials, congressmen and the Senate, as well as a meeting of foreign ministers of the International Coalition against Da’ash.
It is hoped that Iraq will receive the third installment of the International Monetary Fund (IMF) credit standing agreement, which is about 840 million dollars, but that the delivery of the said installment will be after the month of June, adding to the previous receipt of one billion and 250 million dollars out of the loan pledged by the Fund, 5.3 billion dollars.

The member of the Parliamentary Integrity Committee Abdul Karim Al-Abtan, the lack of full control over the Iraqi border crossings by the State, while pointed out that if Iraq had control of those ports did not need borrowing from the International Monetary Fund.

“If there was full control by the government, Iraq would not need to resort to the International Monetary Fund, because the amounts that are flowing to Iraq through the border crossings are large and not insignificant,” Abtan told the Journal News.

He added that “the large number of decision-makers in the issue of border crossings led to confusion in its work, pointing to the receipt of complaints, especially from truck drivers by the exposure of some of the controls to extortion through the imposition of material royalties and the Commission is currently investigating this subject.”

He called on the central government to “pay attention to the issue of border crossings, especially as the state is currently suffering a financial crisis suffocating, in addition to the obligation to be subject to goods entering Iraq to the standards of quality control.”

The delegation of the Iraqi government, in Amman, has held consultations with the International Monetary Fund (IMF) in the second review of the credit agreement with the IMF. This review includes a number of rounds of consultations continuing until June.
The head of the mission of the International Fund, Christian Jos, the continuation of Iraqi economic activity dimmed in the year 2017, because of the reduction of oil production by 1.5% under the agreement reached by the Organization of Petroleum Exporting Countries (OPEC), and the modest recovery of the non-oil sector.

“Iraq is severely affected by the conflict with Dahsh and the sharp fall in global oil prices since 2014,” said IMF Chief of Mission Christine Goz, in a final statement of the International Monetary Fund’s Iraq mission in Amman. “The Iraqi government responded to the public financial crisis , And the balance of payments crisis, with a substantial but necessary financial adjustment, supported by financial assistance from the international community. “

“In 2016, real GDP growth continued at 11 percent, supported by a significant increase in oil production that benefited from previous oil investments,” he said. However, the non-oil economy has shrunk by 8% due to conflict and fiscal adjustment. “

“The sharp decline in oil prices caused the reduction of Iraq’s total international reserves from $ 53.7 billion at the end of 2015 to a comfortable level of $ 46.5 billion at the end of December 2016.”
“The pressure on public finances remains high, with the government deficit remaining at 12 percent of GDP in 2016 due to continued weak oil prices and rising humanitarian and security spending,” he said.