Although Suffering From A Severe Financial Crisis , Making It Resort To Borrowing

Although Iraq occupies this place among the richest countries in natural resources, but mismanagement and financial corruption, insecurity and instability and its dependence on only oil resources, and many other factors, have made Iraq is suffering from a severe financial crisis, and resort to borrowing to secure its employees’ salaries.

It is hoped that the Prime Minister Haider al-Abadi went today to Washington on an official visit, at the invitation of US President Donald Trump, to be the second senior Arab official hospitality new administration within a few days.

A source in the National Alliance Saturday that the visit of Prime Minister Haider al-Abadi to Washington not given up the discussion of the crowd and the economic file.

The leader of the National Alliance on the Keywords, in a statement to the Journal, that “Abadi haymaking to the issue of the popular crowd may ask about in Washington had in addition to other issues related to the Iraq war with Daesh economic files and to see Trump’s policy towards Iraq and the support provided by Washington had for Iraq and the region.

For his part, said a spokesman for al-Abadi, Saad Sabri Office for “Il Giornale”, said that “the prime minister went to the United States at the official invitation was extended to him by President Donald Trump, it will be held several meetings after meeting with Trump, as it will meet with a number of other senior officials in the US administration, as well as members of Congress, as well as a number of representatives of international companies, and representatives of international financial organizations. “

He added Sabri, that “Abadi will discuss during these meetings, joint efforts between Baghdad and Washington in the war on terror and close coordination and cooperation between the two countries at various military and security levels, as well as ways to strengthen the training of Iraqi forces by American commanders.”

He continued, “The talks will also deal, Iraq’s efforts within the framework of the humanitarian issue and goal of displaced governmental plans and actions taken to achieve stability in the liberated areas and ways to accelerate the reconstruction and the return of the population to it.”

And that “Abadi will present the perceptions of Iraq is about ways to support planned by America and the international community in the economic fields to help him overcome the current financial crisis, in order to strengthen the government’s reform paper put forward by the Iraqi government.”

Sabri concluded saying that “This visit is seen as came at a time when all the leaders of countries willing to meet with Trump after assuming the presidency of the United States of America, and this underlines the importance of Iraq in the region and the world, especially after coming to the elimination of terrorism,” noting that “the visit highlights position is occupied by Iraq among the nations of the world, and reflects the international community’s support for Iraq. “

US President Donald Trump, the face earlier, an official invitation to the Prime Minister Haider al-Abadi, to visit the United States, at the time confirmed last met for the visit during the current month of March.

For his part, Secretary General of the Council of Ministers Mahdi Keywords that “Abadi will participate in the conference coalition countries to fight terrorism in Washington,” noting that “the visit holds clear messages about the status enjoyed by Iraq among the world after it showed admiration for a great turn heroic in the fight against terrorism and big victories achieved by ridding the world of the danger does not exclude anyone. “

Added Keywords, “The prime minister will brief the world during his participation in the conference on major military achievements and humanitarian effort of government institutions and ministries to catch waves of displacement and the preservation of the lives of civilians and to create them with basic supplies will also confirm the importance of international support in the achievement of stability and reconstruction.”

Informed Iraqi sources suggest that the control of the visit, follow-up to the withdrawal of Iraq, an alliance of US Saudi Turkish strategy. According to sources in Baghdad, the succession of my visit, Prince Mohammed bin Salman al-Abadi to the United States “is not a coincidence”, especially after the many on a clear role represented by Washington in the rounding signals between Baghdad and Riyadh. The Iraqi prime minister is counting on the US and Western support to face the internal and external pressures.

The sources say that the White House told Abadi that his meeting with Trump will hold days to meet with Trump Prince Mohammed bin Salman after. The White House has been presented to Abadi, during the visit, a summary of the consultative meeting held by Sunni political leaders over the weekend in Istanbul, sponsored directly from Turkey, Saudi Arabia and American support, according to sources Mtalaah.weida observers I met Trump Prince Mohammed bin Salman al-Abadi in one circle, not far from meeting Astunbol.okan Iraqi Prime Minister drew criticism clear to meet Istanbul, when asked about his opinion during a press conference in Baghdad, after a wave of anger that most of the media swept the Shiite parties in Baghdad since the meeting in Turkey.

Since the visit of the Saudi Foreign Minister Adel al-Jubeir to Baghdad in the twenty-fifth of last month, relations between Baghdad and Riyadh is witnessing a clear improvement revived him an Iraqi delegation earlier this month, a technical visit to Saudi Arabia to discuss the reopening of a border crossing between the two neighbors opportunities, and the conduct of regular flights between the two capitals.

But the most important message Saudi Arabia, after visiting al-Jubeir, Riyadh is to send a plane carrying dozens of Saudi Shiites to the province of Karbala to visit the shrine of Imam performance Alhasin.otaatserb of the Green Zone news about Saudi Arabia’s intention to appoint a new ambassador to Baghdad, from the Shiite sect, to succeed Ambassador Thamer Sabhan.

According to politicians familiar with the “Saudi Arabia’s growing movement towards Iraq translates the US administration aimed at encouraging Abadi on convergence with other big countries in the region’s strategy.”

Sources in Baghdad reveals that among the most important files that will be discussed during a visit Abadi, is “the future of the Sunni areas,” especially with the approach of editing the right coast operation in Mosul.

Muqtada Al-Sadr has called for “million man march” on Friday in Tahrir Square central #Baghdad, Sadr will attend to give “important” speech.

Twilight News / battles may be the real way to compare military forces to each other, but fortunately, the world did not have many opportunities in recent countries to review military forces in bloody wars, despite the continued fighting and thecontinuing wars in a number of countries in the world, including Arab countries.
However, the assessment of a simple purely military force could be very interesting, so we resorted to the Global Index of military force, which classifies military force in 106 countries based on more than 50 workers, including the state budget and military manpower and the amount of equipment for each country in their own arsenal , andnatural resources.
The index focuses on quantitative and qualitative ignores important differences, such as the absence of a permanent naval force in the landlocked States, and does not take into account the nuclear stockpile, which is still a trump card in the end in thepolitical geography.
As the Business Insider American site displays the top 25 army in a graph, according to the index of the global military force , which was issued in April / April last (before events such as the Russian invasion of East Ukraine in August / August and strikes Daesh stun in Iraq and the escalation between Israel and Hamas) and involves on acomplex set of data that are subject to constant adjustments and corrections.
Middle East countries topping .. Egypt the first Arab
forefront of Turkey , the index being the greatest military power in the Middle East, coming in eighth place, while Egypt occupies the second place at the level of theMiddle East, Arab and first, as ranking 12 among the world comes.
As Israel comes as the third largest military force in the Middle East Taking upranked 16th global index, followed by Iran , the fourth largest in the region byobtaining the 21st place, followed by Saudi Arabia is ranked 24th in the world, and thefifth in the Middle East, and the second in the Arab region .
And it occupies Algeria ranked 3 Arabs, and 26 globally, according to the index, followed by Syria at the center of the 36, and in the fifth Arab ranked the Kingdom ofMorocco come again, and in the order of 56 at the global level, then the United Arab Emirates at the center of the 58 globally, followed by Iraq in the center of the 59th, and Yemen ranked 61 globally, and the eighth Arab.
Then Jordan, Sudan and Libya come in the 70 centers, 71, and 72 of the world respectively, then Tunisia, Oman and Kuwait, topping the centers between 76 and 78, and Bahrain , the 91 Center, and Qatar in the 93, followed in the 95 position globally Lebanon. It confirmed the rapid reaction leadership on Saturday that the coming hours will witness the great liberation Nouri mosque, noting that the last storming of the mosque is bad weather two days ago.

A spokesman for the rapid reaction Ammar Moussawi said the ‘rapid reaction forces locked in fierce battles against Daesh gangs in the vicinity of the Great Mosque of Al-Nouri, who saw the inauguration of the criminal organization leader Daesh terrorist Abu Bakr al-Baghdadi’s speech’.

He added that the ‘adverse weather conditions are causing delays in freeing the mosque until now and will see the next few hours editing the mosque completely and raise the Iraqi flag over it.’

Moussawi said that the ‘elements Daesh in the defense of desperate Nouri mosque because of its great symbolic fall for them and mean the fall of the terrorist caliphate platform’.

He stressed that the ‘battles waged by our troops have killed hundreds of Ansar Daesh, as well as smashing dozens of bombs and the wheels of vehicles’.

BREAKING: #Iraq‘s Federal Police are around half a kilometre from the Great Mosque of Al-Nuri, where Al-Baghdadi announced the “caliphate”. 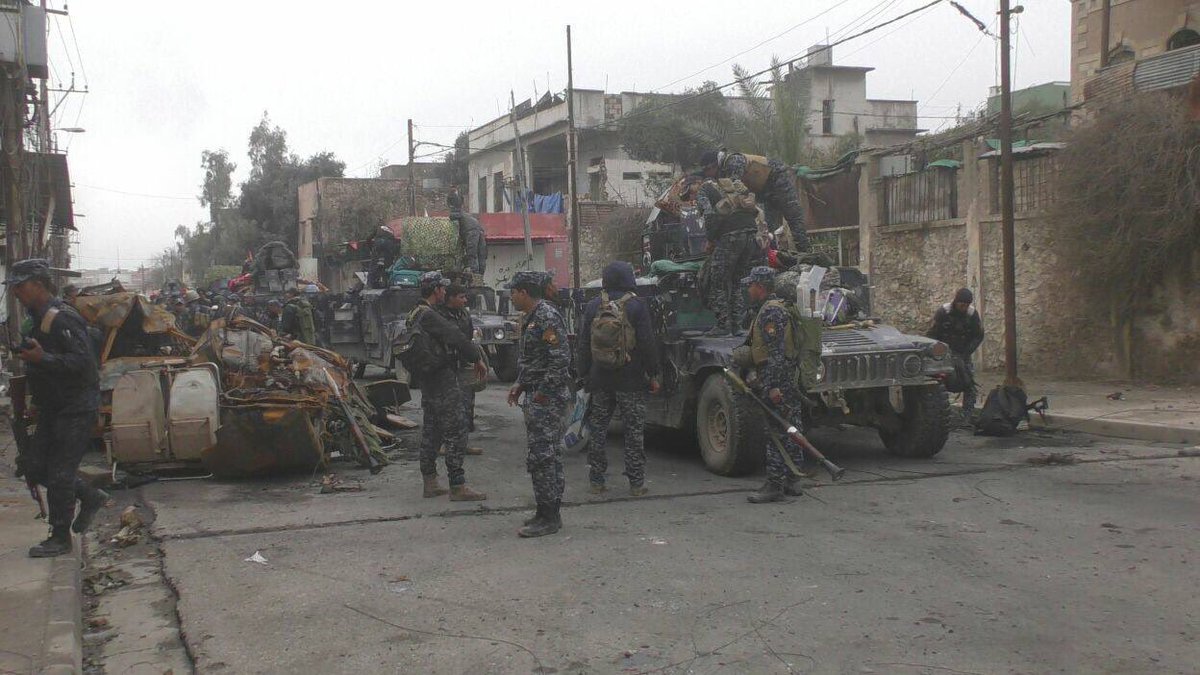 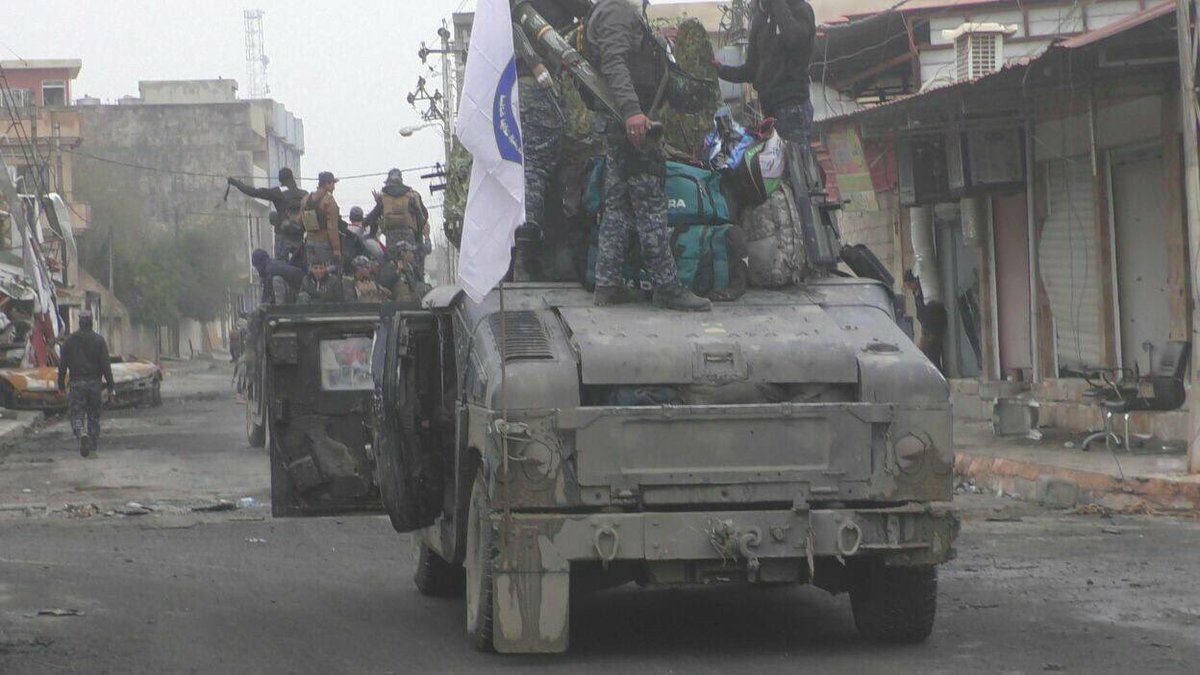 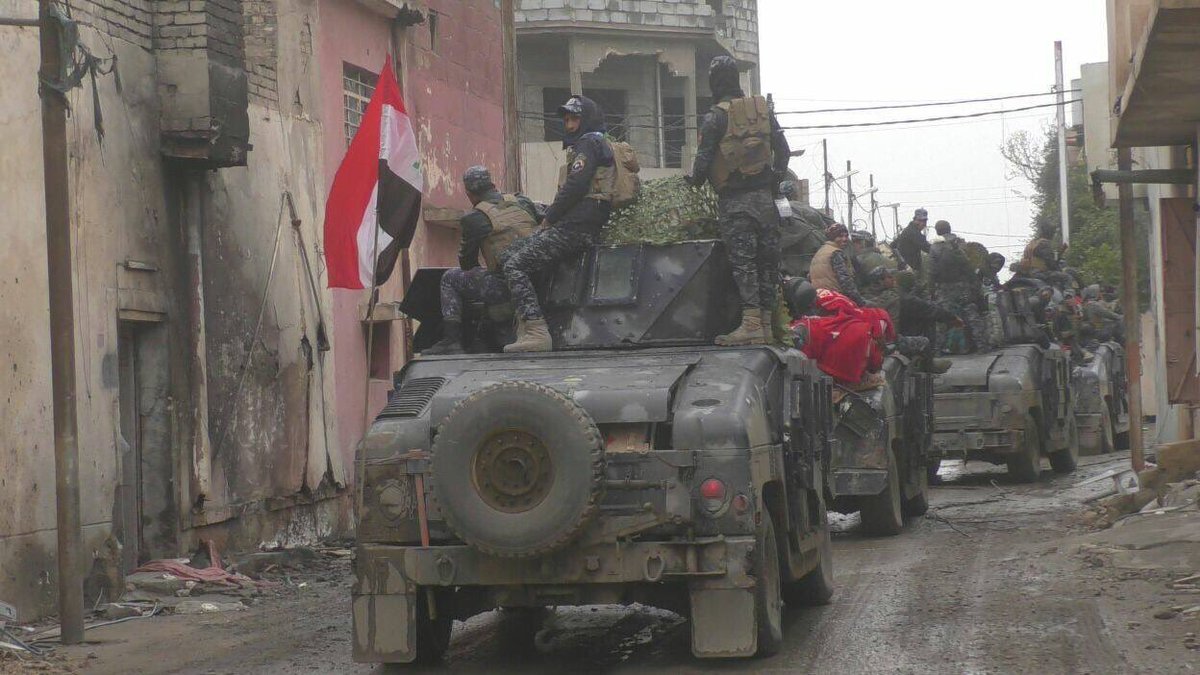 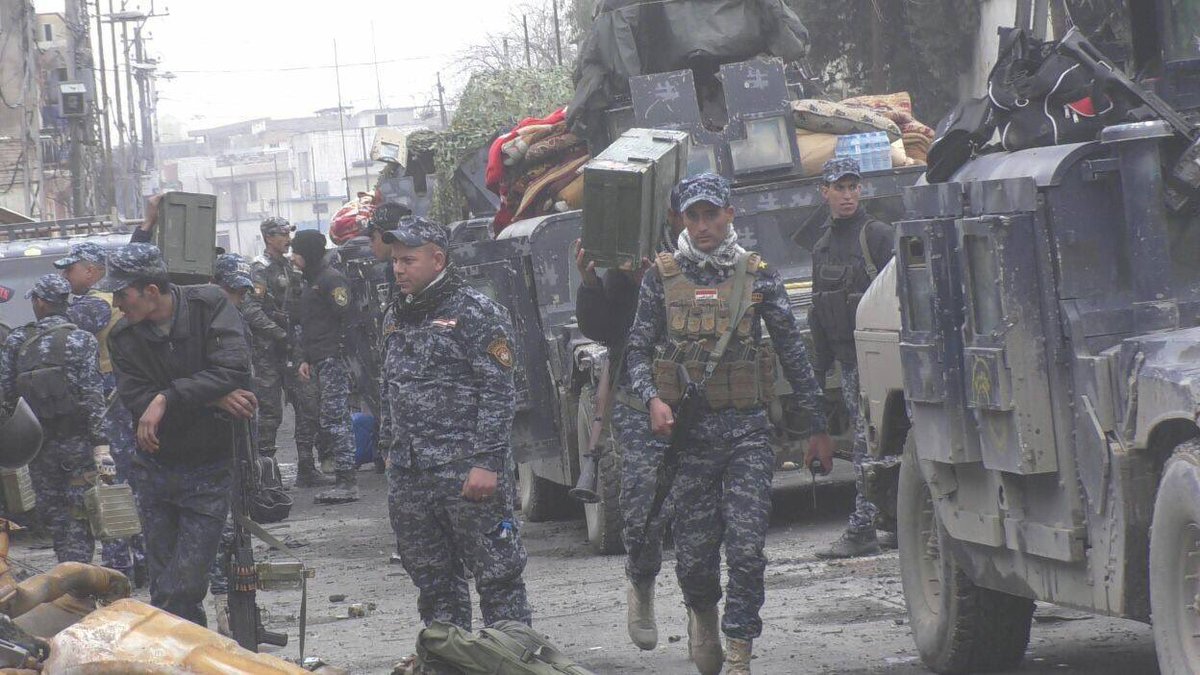 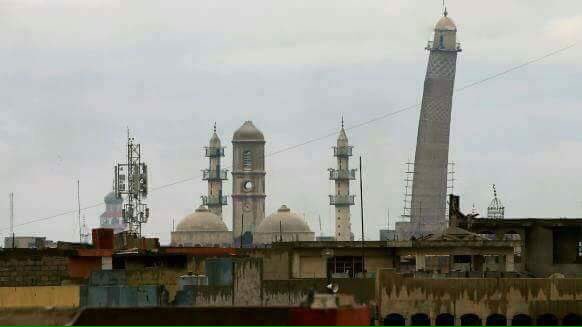