Khandan – The People’s Protection Units Kurdish commander, said the attack , which the United States supported the expulsion of the organization “Daesh” terrorist from the city of Raqqa will be launched at the beginning of April, stressing that his forces will participate in spite of strong opposition to Turkey.
The comments made by the leader of the Kurdish units Sipan Hamo told Reuters on Friday, is the first indication of the date of the attack on tenderness.
In a written response to questions from Reuters Hamou he said: “For a decision to edit tenderness and storming it had settled with the beginning of the month of April will begin military operations and we believe that the liberation of tenderness will not exceed several weeks.”
Quoted fierce statements, through a spokesman for People’s Protection Units, as I said (Reuters).
Ankara is pressing the United States to abandon its military alliance with the Kurdish units.
The role of the units are a major point of contention between the United States and Turkey , its ally in NATO. Turkey wants Washington to rely more on the Syrian Arab opposition groups backed by Ankara in the attack on tenderness.
The fierceness of the People’s Protection Units will storm tenderness with Arab fighters in Syria democratic forces.
He added that 25 percent of the total force , which will storm tenderness of units outstanding fighters in combat experiences.
The Turkish Foreign Minister Mouloud Jawish Ihsanoglu said in an interview with the station (news left) on Thursday, said that some US military commanders prefer to participate People’s Protection Units in the attack because of past successes on the ground.
Syrian forces have cut the main road of democracy out of the city earlier this month with the support of US special forces and air strikes.
The only way out of tenderness currently is across the Euphrates River , which limits the city from the south, he said the Syrian Observatory for Human Rights said all the bridges over the river have been destroyed.
The Syrian Observatory said that two hundred thousand people live in the city and that he believed that many of the organization ‘s leaders are still there.
He pointed to the fierceness of the arrangements for an attack at an advanced stage.
He explained , “combat readiness in terms of preparing gear and numbers of fighters private enough after the city was cordoned off and isolated from three sides .. west and north and east.”
The international coalition led by the United States announced last week that he was deployed artillery unit of marines to Syria to help speed up the campaign to defeat “Daesh” in tenderness to join about 500 US military has already deployed in Syria.
A Kurdish military source else , “it is clear that American forces are growing in number and equipped in northern Syria in order to create and give battle tenderness and tenderness after the strategic balance greater momentum and this momentum can be increased with the approach of the Battle of the actual tenderness beginning of the month of April.”
The fierceness of the political goal of the Kurdish units is the “rights of the Kurdish people in Syria , a jurist and a constitutional guarantee.”
He added , “and we hope that these objectives are achieved political negotiations , then there would not be a problem with the system. Although the military confrontations that Hdtt previously , ” according to Reuters.
The fierceness that has a long history of struggle for the rights of the Kurds in Syria and “help the Kurds in other parts of Kurdistan.”
He added that the priority for protection units people are “fighting terrorism” in all parts of Syria due to “be part of Syria.”

The “caliphate” in #Iraq collapsed. Maps of what Da’ish controlled in June 2014 and March 2017. Remaining pockets will soon be dealt with. 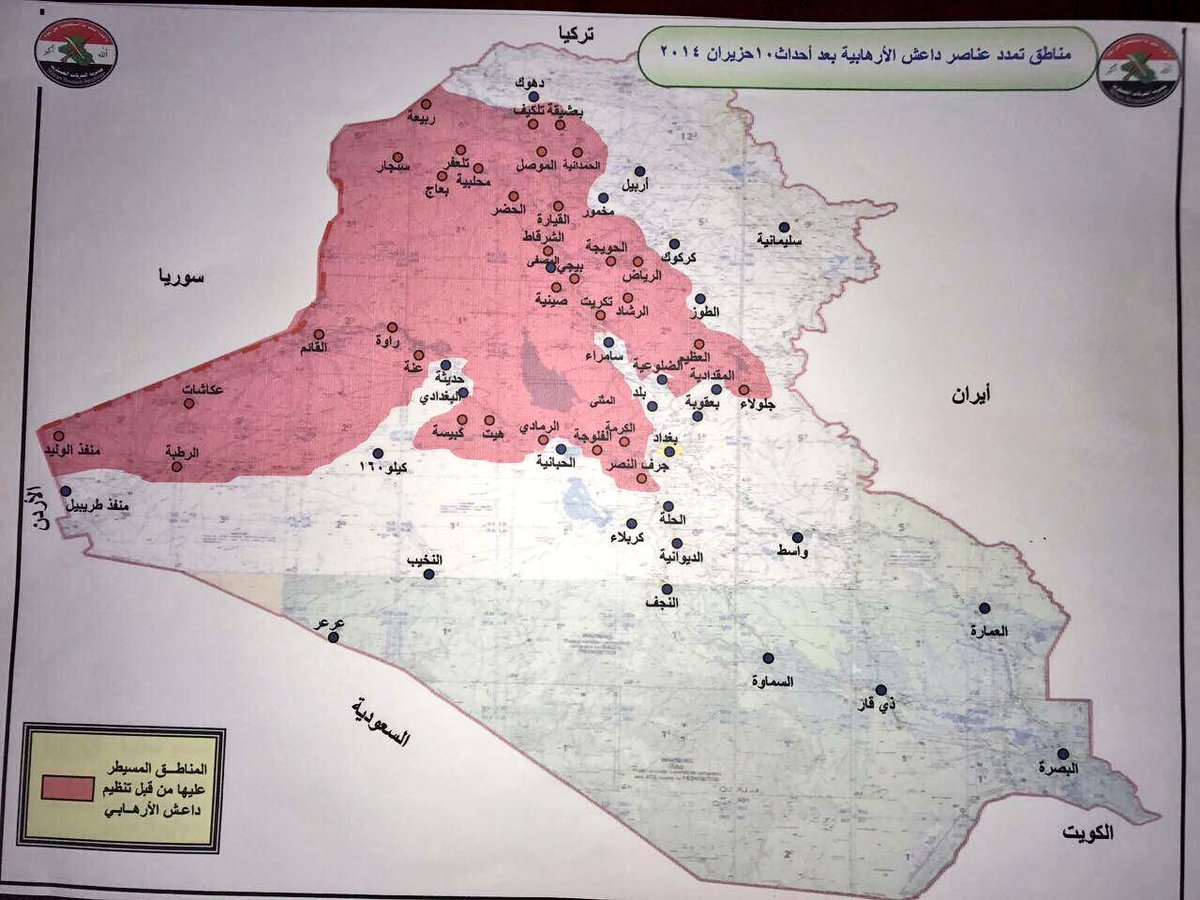 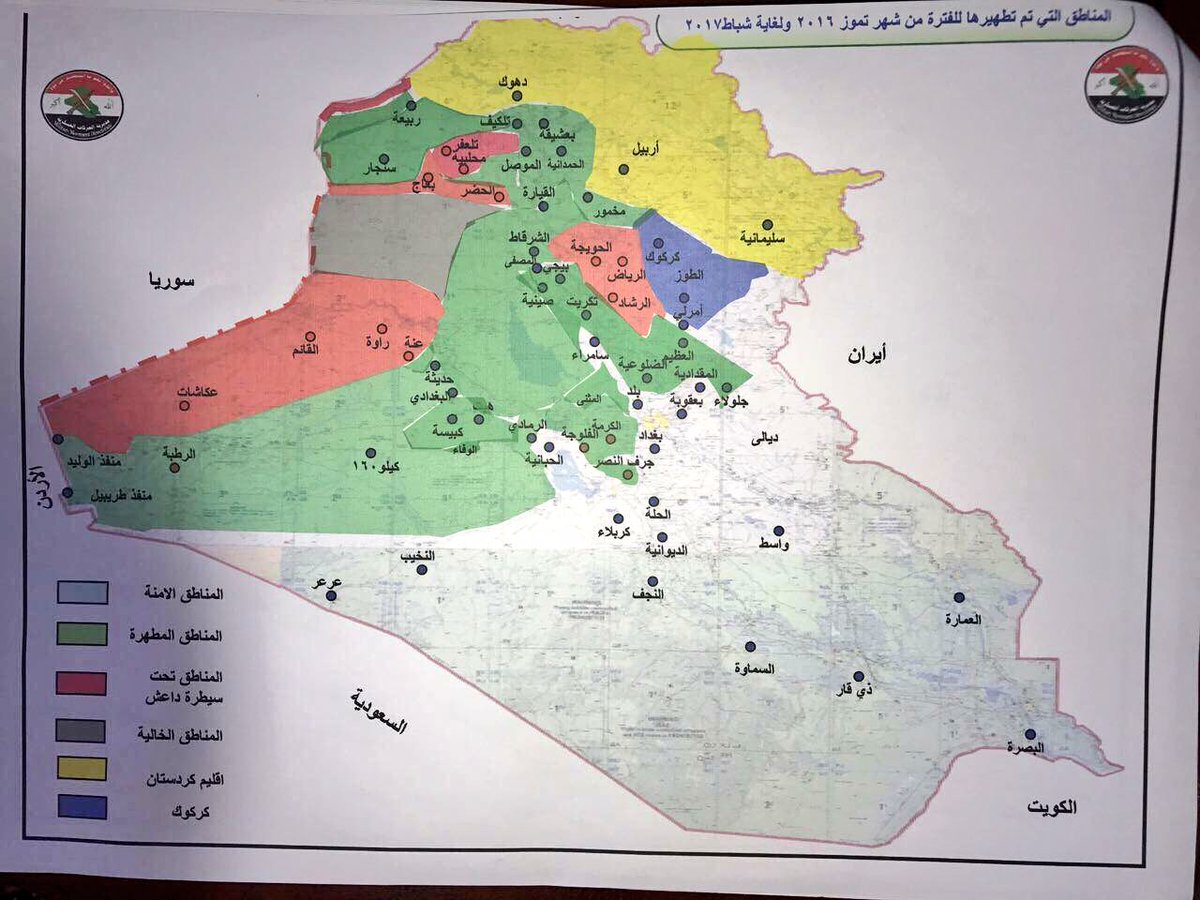 End-of-Mission press releases include statements of IMF staff teams that convey preliminary findings after a visit to a country. The views expressed in this statement are those of the IMF staff and do not necessarily represent the views of the IMF’s Executive Board. Based on the preliminary findings of this mission, staff will prepare a report that, subject to management approval, will be presented to the IMF’s Executive Board for discussion and decision.

The Iraqi authorities and the staff of the International Monetary Fund (IMF) held discussions in Amman from March 5–17, 2017 on the 2017 Article IV Consultation and the second review of Iraq’s 36-month Stand-By Arrangement (SBA) approved by the IMF Executive Board on July 7, 2016 (See Press Release No. 16/321). The SBA aims to restore fiscal and external balance and to improve public financial management while protecting social spending. The first review under the SBA was completed on December 5, 2016 ( See Press Release No. 16/540).

“Iraq has been hard hit by the conflict with ISIS and the plunge in global oil prices since 2014. The government has responded to the fiscal and balance of payments crisis with a large but necessary fiscal adjustment supported by financial assistance from the international community. In 2016, real GDP growth was sustained at 11 percent supported by a large increase in oil output that benefitted from past oil investments. Nevertheless, the non-oil economy experienced an 8 percent contraction due to the conflict and the fiscal consolidation. In 2017, economic activity is expected to remain muted due to a 1.5 percent contraction in oil production under the agreement reached by the Organization for Petroleum Exporting Countries, and only a tepid recovery of the non-oil sector.

“The plunge in oil prices has driven the decline of Iraq’s gross international reserves from $53.7 billion at end 2015 to the still comfortable level of $46.5 billion at the end of December, 2016. Fiscal pressures remain significant with the government deficit remaining at 12 percent of GDP in 2016, due to continuing weak oil prices and rising humanitarian and security spending. Total public debt increased from 32 to 64 percent of GDP during 2014-16. Credit growth decelerated and non-performing loans in state-owned and private banks increased significantly in 2016.

“The authorities have maintained the exchange rate peg which remains a key nominal anchor. Medium term growth prospects remain modest driven by projected flat oil production and investments in the face of the revenue constraint and modest pickup in non-oil growth supported by the expected improvement in security and implementation of structural reform. Further reforms to create fiscal space for inclusive growth, strengthen the business environment, reduce corruption and repair the banking sector are needed to support private sector-led growth and diversification of the economy once post- ISIS reconstruction is underway. Risks remain high, arising primarily from uncertainty in the oil price outlook, security and political uncertainties, and administrative weaknesses.

“The Iraqi authorities and IMF staff started discussions on the second review of the SBA. These discussions will continue during the upcoming IMF and World Bank Spring Meetings from April 21–23, 2017 in Washington, DC.

“During the visit, the team met with the Acting Minister of Finance Prof. Abdulrazzaq A. Jaleel Essa, Acting Governor of the Central Bank of Iraq (CBI), Dr. Ali Mohsen Ismail Al-Allaq, the Financial Adviser to the Prime Minister Dr. Mudher Saleh, and officials from the ministries of finance, oil, planning, the State Oil Marketing Organization, the Central Statistical Office, the Central Bank of Iraq, and representatives from the Kurdistan Regional Government, and the Board of Supreme Audit. The team would like to thank the Iraqi authorities for their cooperation and the open and productive discussions.”

The Minister of Finance Agency Essa Abdul Razzaq, on Friday, the success of the talks with the International Monetary Fund in the Jordanian capital, Amman, in what he said that the next meeting will be in Washington.

Issa said in a brief statement received / balances News /, copy of “The talks with the IMF, which took place in Amman, Jordan, was a success.”

He added, “The next meeting will be in Washington, and will announce the results of agreements in support of the development of the Iraqi economy.”

He was an economic adviser to the prime minister, the appearance of Mohammed Saleh, on Friday refuted recent allegations concerning the meetings of the International Monetary Fund failed with Iraq, held in Amman, Jordan, stressing that the program with the IMF is going normally and stereotyped and successful Jadda.anthy 29/1’s

[Oan- Baghdad]
denied an economic adviser to Prime Minister Haider al – Abadi, news about the negotiations with the International Monetary Fund on standby credit for Iraq to fail.
Counsel said the appearance of Mohammed Saleh in a statement received by all of Iraq [where] a copy of it, in response to news meetings of the International Monetary Fund Meeting held failures in Amman “Personally , I attended an important aspect of the second revision of the standby credit with the International Monetary Fund and the results agreement consultations were successful very”.
He added, ” The International Fund will issue a final statement in this regard and there is some statistical data and digital realities on expenditures and public revenues, the Fund has requested clarifications broader presented at the end of next April.”
He pointed out that ” the IMF has praised the Iraqi government ‘s ability in the face of terrorism and Aldaasha impressive victories achieved under exceptional economic circumstances , ” pointing out that ” the program with the IMF is going normally and typically very successful.”
And Saleh, that “fifth columnists Aldaasha is touting it to find a crack in the international relations of Iraq , a media and psychological war because of victories in Mosul.”
http://www.alliraqnews.com/modules/news/article.php?storyid=59646

{Baghdad} Euphrates News spokesman Joint Special Operations Command, Brigadier General Yahya Messenger said, that Daesh terrorist gangs, have become completely blocked from all sides in the western part of the city of Mosul, the last big stronghold in the country.
He said al – Zubeidi, in a press statement, said that ” the Iraqi army message to terrorists Daesh are: either surrender and receive a fair trial, or death , ” he said . “Daesh besieged from all sides in the remaining districts of the right coast {west} of the connector, there are targeting Muwaffaq for terrorists and the headquarters and leaders Daesh terrorist. ”
He pointed out that “Daesh distracted in front of our progress, but still has the ability to maneuver through some bombs , wheels and indirect fire.”
He pointed out that ” the full liberation of Mosul a matter of time,” adding , “Sentrd terrorist Daesh from the right coast.”
He praised al – Zubaidi , the “cooperation of citizens with the troops to get the information on the organization , ” stressing that this information “contributed significantly to the targeting and arresting a large number of them , ” pointing out that “more than 90 percent of those who are fighting in the ranks of Daesh in Mosul Arab and foreign nationalities “.anthy
http://alforatnews.com/modules/news/article.php?storyid=140093