Said Governor of the Central Bank of Iraq on the Keywords dollar from the sale of crude oil imports fell to 70 percent, but the «Central» Keep an acceptable level of monetary reserves in hard currency and gold at $ 49 billion, which covers the outer commitment and is a positive indicator. He pointed out that it has received praise from specialized international organizations, and the reserve is calculated by the «Central» and the International Monetary Fund does not accurately raises concern for the next five years.
He stressed during a meeting with media that « the exchange rates at local markets are still within acceptable limits compared to other countries», pointing out that « the central Gannan sell the dollar in 2016 to 33 billion dollars from 44 billion the previous year». He stressed that «in 2016 considered themost difficult on the financial level, as the deficit 24 trillion dinars ($ 20.4 billion), and was covered outlets facing great difficulties, but Astdrickna situation despite the government ‘s position of access to external financing could be described as difficult, and did not we have only specialized international organizations, including the international Monetary Fund , which gives the green light to get the debt through the reports regarding the country concerned ».
Keywords explained that « the Central interested in money laundering file and the financing of terrorism ,which is one of the most prominent deal with the International Monetary Fund standards», adding that «What struck IMF inflation index , which was brought under control in spite of all the challenges faced by Iraq, as it holds periodic meetings between the organizations international specialized in the financial affairs of Iraq and to identify the most significant developments. » He stressed « the need to increase thefinancial resources of the country and that Iraq remains a prisoner of its oil imports , which subjected to threats», stressing that « the gradual move to the development of the productive resources of 5 percent a year is very important and reduces dependence on oil sources».
Keywords and pointed out that « the previous budgets have not developed real economic sectors ,industrial, agricultural, tourism, creating economic model had a negative impact , in fact, as to the nature of the current economic cycle is not the development of the national economy as it is in the dependence on foreign imports». He pointed out that « the central initiative to allocate $ 6 billion in light of thefinancial situation is difficult productive and service sectors aim to activate the productive process and toaddress the core of the economic problem», pointing out that «this initiative collided institutional reality that was not really able to invest on the ground». He explained that « the central dish for 90 percent of the 45 standards, and we were able to access through the gray area to the outer area of follow – up and we moved away from the danger zone».
And sell the dollar Keywords said that « the central linked to the extent of compliance with international rules, and we have developed programs and sell the dollar opened international offices outside convertible», adding that «sell the dollar unearned legitimize and is based on the Central Bank Law».Turning to the growing activity of Islamic banking and openness to granting approvals for Islamic banks, he returned to «large number of people want to deal with this type of banks, will be subject to theexperience of the calendar after a certain period».
Keywords revealed that the «Central is able to cover Iraq ‘s international obligations and financing offoreign trade, and the reserve currency within the standards and Central also covers the local currency by a large margin, as it affects the future generations servings of wealth, which will bear the burden offalse consumer policies of the current generation». He added: «adopted Iraq in recent years to bridge the fiscal deficit through internal and external borrowing, which led him to conclude an agreement with the International Monetary Fund finally to borrow $ 5.4 billion, and the fund is a guarantor for other loans is estimated at 18 billion dollars from Arab and foreign countries ».

Twilight News / dropped Iraqi Air Force aircraft on Monday evening, hundreds of thousands on the right coast of the city of Mosul, according to the announcement media war cell.
She said the cell in a statement, responded to Twilight News, said the Iraqi air force planes dropped hundreds of thousands of leaflets on the right side of the city of Mosul.
The statement added that those publications include the recommendations of the “mission” of the citizens, including the security forces are close to them to free them from the hands of Daesh.

Another big victory for #Iraq‘s special forces in western #Mosul. The district of “new Mosul” has been retaken. 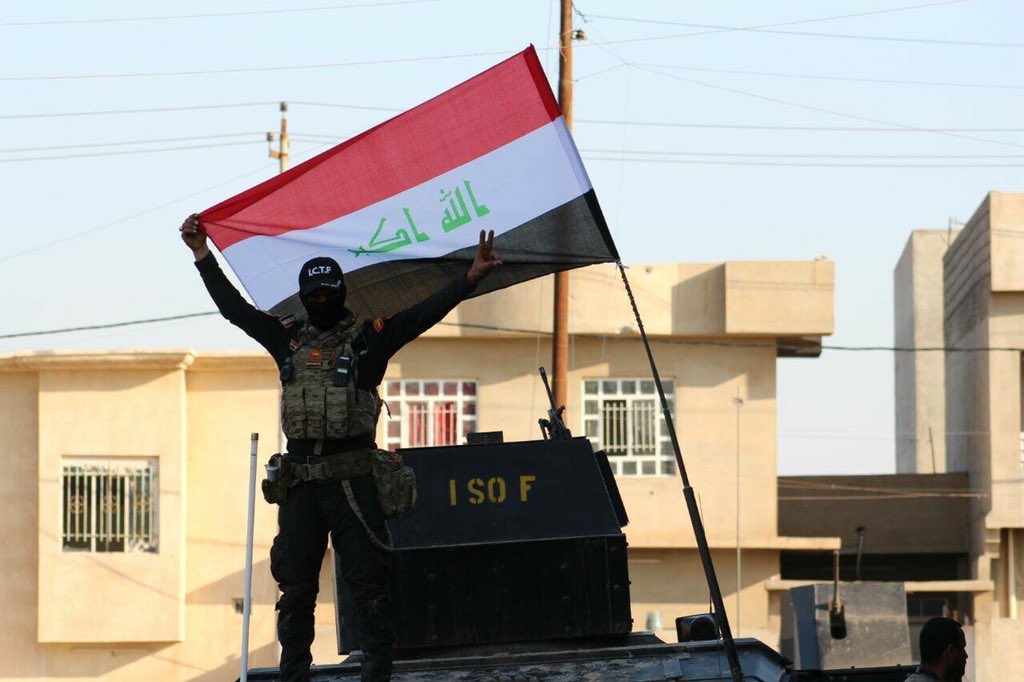 * Fitch revises outlook on Iraq to stable; affirms at ‘B-‘

* Fitch on Iraq – in 2017 we forecast that deficit will narrow further, to 5.1% of GDP, with higher average oil prices driving strong revenue growth

* Fitch on Iraq – on spending side, we forecast 12.1% growth in expenditure after three years of substantial spending decline

* Fitch on Iraq – “banking sector is under-developed and fundamentally weak”

* Fitch on Iraq – we “expect production and exports to plateau in 2017 given similar amounts budgeted by government for ioc payments this year” Source text for Eikon:

Twilight News / Directorate of Military Intelligence reported on Monday that a group of al-Daesh oldest of its members to burn themselves up near a village, which lies to the east of hand Badush northern city of Mosul.

She said the directorate said in a statement responded to the Twilight News, said, a group of Daesh has burned itself into one of the houses near the village, “Sheikh Mohammed,” the result of frustration and a sense of defeat and Tiguenhm not escape the grip of security forces. ”

The security forces had stormed the village of Sheikh Mohammed yesterday and regained control of the apartment complex where Monday from the grip of the militant group.

Iraqi special forces fighting an uphill battle witnessing Mtlahma fighting with al Daesh in western Mosul, insurgents in a bid to drive them out of the last major strongholds in the cities of Iraq and directing a major blow to the terrorist organization Daesh.

And it chopped the Tigris River city of Mosul, which is across from north to south. Iraqi forces backed by coalition led by the United States, the western part of the city last month after regaining control of the eastern part in the offensive that began late last year was stormed.

And increased urban warfare now fiercer than ever before to focus its fighters in one of the two parts of the city and because the western part where the old neighborhood and the city center there is a higher population density.

Said Alaa Shaker, 32, a member of the anti-terrorism “fighting a much more coherent. It was ahead of Street Road and is now out of the house to the house.”

He said, using a popular name for the organization, “we are often actually in one house on the roof and in the basement Daesh. Sometimes take a grenade and if there are civilians and families at home, shouting them to shelter themselves inside one of the closets.”

Saif al-Rasheed, 28, a medical assistant to a counter-terrorism One of the members of the special forces was killed earlier in the day in the same area when a bullet hit him in the head and another injured when shot in the neck and groin.

“The Daesh hiding in houses. Open the doors and shooting at soldiers from a few meters away.”

The two were speaking during a break from fighting for lunch in the courtyard of the house in western Mosul, in the neighborhood was to wrest control of the organization Daesh the previous day.

And no one could abandon caution. Shaker has stopped chewing his mouth half-filled with food and then got up to bring assault rifles were Msenodtan on the wall and their proximity to become affordable.

He said a silent indicates that a member of the family living in the house had kidnapped one of Abanndeghitin and turn against the soldiers in the house “in case of any eventuality.”

“It has not happened yet but you have to guard against. We do not know these people. The organization Daesh left behind supporters and sleeper cells.”

Located in the far north of Iraq, Mosul is the largest city occupied by Daesh in Iraq in 2014.

In the battle of Mosul fight a few thousand of its fighters were still in the western part of the city with a group of 100 thousand Iraqi fighter force and head of the anti-terrorist device that could be taken out of the city in a matter of weeks.

However, the methods of its fighters in the battle of Mosul enabled them yet survive for a period much longer than the initial estimates of the government as they disappear among the civilian population and using suicide bombings, car bombs, snipers and a network of tunnels to launch waves of attacks.

And the payment of the fight against terrorism Humvee armored vehicles from the model device to the street outside the house in Mosul and engaged officers inside to study a map on the mobile phone while she was updated on the situation given radios they carry messages.

The front line of the battle space have moved forward but it is not secured yet fully live.

Rachid stare in the street until the end, but warned walk in it. Seconds later, a shell hit the road from al Daesh Vantalegt shrapnel in all directions, and entered the Rosetta House again.

The audience can sense strongly blast.

And quietly said another soldier of the counter-terrorism forces allegedly flashing a peace that this explosion was caused by a rocket propelled grenade.

Said Salam, 33, he was looking forward to the next vacation to visit his pregnant wife in southern Iraq.

The peace puts new glasses and described his doctor after the impact of a car bomb explosion was orchestrated by the organization on his sight at the end of last year.

“The Ooukni on the ground and hit my head hard. As I was directly under the eye by shrapnel.”

During his speech two armored returned from the front line has filled the effects of machine gun fire from the front Zjajhma visor Alrsas.anthy 29 / tc n