[Oan- Baghdad]
Iraq and Saudi Arabia stressed the need to stop the character inflammatory statements and to work on theexchange of high level visits between the officials Albuldan..itba
http://www.alliraqnews.com/modules/news/article.php?storyid=59436

Khandan – Brett Macgork announced the US special envoy to the international coalition against al “Daesh” terrorist on Sunday, Iraqi forces cut off roads leading to another western city of Mosul, which led to the trapping elements within the organization.

Macgork He added that “all militants who are in Mosul , where they will spend,” as quoted by the channel “Arab”.

Macgork stressed that the coalition “strongly engaged not only in order to defeat the terrorists in Mosul but also to ensure that walking away from.”

Officials in the international coalition and the estimated number ofterrorists in 2500 in western Mosul , in the city of Tal Afar , west.

He explained Macgork, that the elements of the organization “Daesh” terrorist lost 60 percent of the land which they occupied during 2014 in Iraq.

The campaign to restore western Mosul is the second great phase in the process launched by the Iraqi forces in October 201 617. 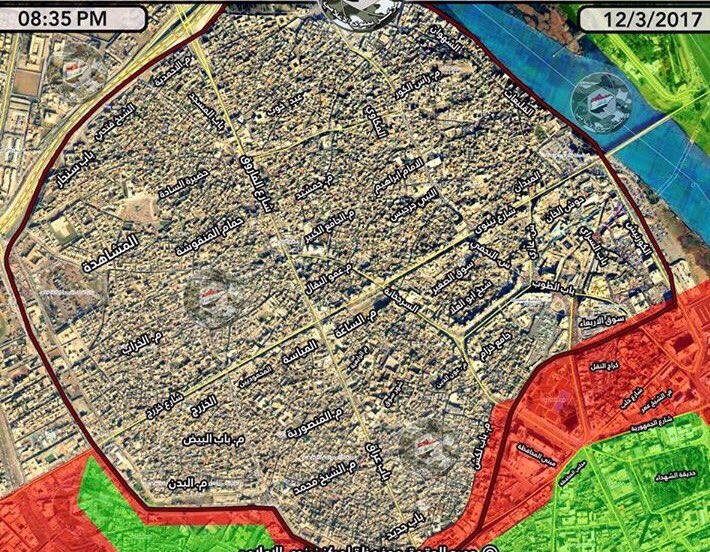 Great progress in old #Mosul district by Rapid Response Div, many surprises will take place in this district. Get ready. pic.twitter.com/tIzH8piD4T

Macgork explained that he “has been restored 150,000 square kilometers of land, which was under the control of the organization Daesh”, pointing out that the alliance of more than 106 free thousands of Iraqi citizens. ”

He continued that “the international coalition was able to train more than 90,000 fighters are distributed between the army and the police and the crowd and the tribes.”

Macgork He stressed that “the Iraqi security forces regained the toughest areas in Mosul and isolated terrorist organization and has boxed Daesh now.”

“The Iraqi Prime Minister Haider al-Abadi will visit the United States next week and meet with President Donald Trump,” adding that the visit would be “very important” as he put it.

Macgork stressed that “any Saudi official visit to Iraq is an important progress in relations, a task for the United States.”

He explained that “Trump asked US Defense Secretary evaluates the performance of the international coalition amid anti campaign for operations carried out by the Alliance,” he said. “We are active in the liberation of the Syrian tenderness nor reproach importance to Assad’s remarks.”

He also said Macgoryk “difficult to determine the amount of aid provided to the displaced people in Iraq and Syria,” but he stressed that “the coming days will witness the biggest military operations against the enemy pressure.”

He pointed out that “they discussed cooperation between Baghdad and Erbil by meeting with al-Abadi,” noting that he will meet with the President of the United Nations Mission in Iraq, Jan Kubiš to discuss the liberalization of Mosul operations.

Iraq was invited today to the Marshall Plan for the reconstruction of the war against terrorism and achieving security and stability in its lands where told Iraqi Foreign Minister Ibrahim al-Jaafari Brett Macgork special envoy of the US president to fight al Daesh during their meeting in Baghdad today destroys that Iraq needs to be similar to the Marshall project project, which contributed to the construction of Germany after World war II, to contribute to the achievement of security and stability, reconstruction and economic development.

He said that the strategic framework agreement signed between Baghdad and Washington in 2008 include many areas of cooperation and exchange of common interests and face common dangers and countries must work to be activated.

He said that any tension in regional relations would provide a favorable environment for the work of terrorism and increase its effectiveness, “and we, despite our refusal of the Turkish intervention in Iraqi territory, but our commitment to the relationship with her, and the Security Council should put this fact in front of his eyes, which we reaffirmed in 2015 in the Turkish penetration in Bashiqa. ”

He stressed keenness to establish better relations between the Arab countries in general, and the geographical proximity especially since it has a major impact on the deployment of an atmosphere of security and stability in the region and the whole world.

For his part, Macgork said that the Iraqi people were conscious and unite to confront terrorism, stressing that it will be eliminated Daesh gangs and beyond Iraq unity of this crisis, and be more secure and stable.

He noted that nothing today compared to what happened in Iraq after the entry of terrorists Daesh 2014 to Iraq, noting that “the United States will host later this month a meeting of foreign ministers of 65 countries within the framework of the international coalition to discuss developments in the war and to continue efforts to eliminate terrorism and ways to strengthen cooperation in the next stage. ”

He said: “I visited several countries before coming to Iraq, and everyone was surprised at the progress in Iraq from the victories and progress in the war against Daesh terrorist gangs.” He said he did not register the attention of the world in Iraq also check after 2014 as countries gathered to support Iraq in its war against terrorism, “noting that the US administration’s priorities eliminate terrorists Daesh, and it will not be achieved only through cooperation with Iraq.”

The two sides discussed during the meeting, the conduct of military operations against the terrorist gangs Daesh great victories achieved by the sons of the Iraqi armed forces Besnovha all in their war against terrorism and supporting the international coalition and other friendly countries to Iraq. It ended 29 / tc n

said second commander of the elite forces , Maj . Gen. Maan al – Saadi, said on Sunday that “terrorist gangs Daesh lost their fighting on the right side of the city of Mosul , Nineveh province.”

He said al – Saadi told I followed the agency all of Iraq [where] that “Daesh lost the power of combat and determination and Hunt on the right side of the city of Mosul , saluting he began to lose command and control , and added that he has restored about 17 of the 40 dead in western Mosul.”

He noted that the “anti – terrorism forces raided the new neighborhoods Alogwat Sunday but the militants seem manifestation of weakness , despite violent resistance initially , ” pointing out that ” the western half of the city restore operations will take less time to regain the east , which was brought under control in January January after fighting lasted a hundred days. ”

The anti – terrorism forces and security forces inflicted a Daesh terrorist gangs great human and material losses during the military operations launched to liberate the right side of the city of Mosul , Nineveh province.

[Where-Baghdad]
Joint Special Operations Command announced that Daesh terrorist gangs are trying to delude the public opinion the existence of violations of Iraqi forces by spreading fabricated videos.
A statement of the cell media Harbi received by all of Iraq [where] a copy of it today , spokesman for the joint operations Brigadier General Yahya Messenger say “day after day trying to enemy Aldaasha is supported delude the public opinion the existence of violations of the security forces or the popular crowd in theliberated areas by publishing videos fabricated in social networking sites it produces terrorist groups or prejudiced views Abgdtha victories of our security forces. ”
” I confirm that the Joint Special Operations Command monitor these videos and analyze and verify the validity of whether or not to have appeared through the preliminary investigation that most of these videos depicting in unknown locations and are fabricating lies therein by wearing people who show the uniforms ofsecurity forces and are hiding landmarks process the faces of the actors during filming. ”
And the messenger , “and that , if anything , it shows that the filming locations are still in the dark Daesh and will come out by the light of victory soon.”
http://www.alliraqnews.com/modules/news/article.php?storyid=59421

[Where-up]
announced the leadership of the Ministry of Defence Joint Operations, on Sunday, yet control 65% of the right side of the city of Mosul, while still progressing with four other neighborhoods of the city center.
Brigadier General Yahya Messenger spokesman for leadership in a press statement, said that “our troops seized so far 65% of the right side of the city of Mosul, and there is progress of our security forces and gangs of refraction Daesh terrorist.”
Messenger said that “security forces are currently battling four neighborhoods deeply right side of theconnector.”
Since February 19 the past, Iraqi forces engaged in running battles west of Mosul , the last stronghold ofDaesh in the city.
Iraqi forces have managed to free several strategic neighborhoods of control Daesh, notably Mosul International Airport, and Camp Ghazlani, government buildings complex , which includes the province and the provincial council.
And right side of the connector is smaller than the eastern part , in terms of space [40% of the total area ofMosul, but the population density is greatest, where the United Nations estimates the number of occupants byabout 800 thousand people.
http://www.alliraqnews.com/modules/news/article.php?storyid=59414

Search national security adviser, chief of the popular crowd Faleh al-Fayad with the private American President Donald Trump and the forces of the international coalition to fight envoy Daesh Brett Macgork the latest developments in military operations against the terrorist organization Daesh and victories achieved by the Iraqi forces Besnovha all in the war against terrorism.

The two sides stressed the importance of planning for the post-Daesh and concerted efforts to eradicate terrorism, stressing the development of relations between Iraq and the United States in all fields to serve the interests of the two countries.

Nineveh (IraqiNews.com) Iraqi government troops recaptured a district in central Mosul on Sunday, hours after storming it and engaging in fights with Islamic State militants.

Iraqi government forces took over eastern Mosul in January after three months of fighting with IS, and have entered a third week of operations to clear the western region from militants. The troops have become closer to the central Mosul’s Old City, having recaptured major government facilities, a military base and the city’s airport.

Earlier on Sunday, Maan al-Saadi, a senior CTF commander, told AFP that government forces had become in control over at least 30 percent of the western side of the city.

Military leaders from the Iraqi side and the allied U.S.-led coalition had foreseen a tougher battle in western Mosul due to the region’s dense residential areas and the high number of population estimated by 750.000.

The conflict in Mosul has displaced above 250.000 people since operations launched in October 2016. Refugees from western Mosul alone reached more than 99.000 on Sunday.

MOSUL — The Islamic State (IS) militants carried out late on Saturday a fierce attack on Tal Afar airport, 70 km south of Mosul, where they were repelled by the Iraqi forces stationed in the area.

Colonel Khudhair Salih from the Iraqi Joint Special Operations Command told BasNews the Brigade 92 of the Iraqi army repulsed a major IS offensive on Tal Afar airport which is currently under Iraqi forces’ control.

The source added that the security forces managed to kill 18 militants including four suicide bombers, as well as capturing three others.