Any so-called Islamic State (IS) fighters left in Mosul will die in the Iraqi city, a US envoy co-ordinating the offensive has said.

Brett McGurk, the senior US official in the counter-IS coalition, issued the warning after Iraqi forces cut off the last road out of the city, trapping IS fighters inside.

The jihadists have held Mosul, Iraq’s second city, since 2014.

But Iraqi forces have managed to retake large areas in a months-long offensive.

They now control all of Mosul’s eastern side, and the latest US-backed push against IS – which began on 5 March – has forced the extremists from key locations in the west, including the main local government headquarters and the famed Mosul museum.

Heavy fighting continued over the weekend, with Mr McGurk telling reporters in Baghdad on Sunday “just last night, the 9th Iraqi army division … cut off the last road out of Mosul”.

He added “Any of the fighters who are left in Mosul, they’re going to die there, because they’re trapped.

“So we are very committed to not just defeating them in Mosul, but making sure these guys can not escape.”

He said he believed the fight would be easier than in eastern Mosul, which took 100 days to reclaim after the offensive was launched in October, finally falling in January.

However, federal police and rapid response units say they have now entered the Bab al-Tob area of the Old City, where the fight is expected to be tough due to its narrow alleyways through which armoured vehicles can not pass.

But he added: “The battle is not easy … we are fighting an irregular enemy who hides among the citizens and uses tactics of booby-trapping, explosions and suicide bombers, and the operation is taking place with precision to preserve the lives of the citizens. “

It is thought there may be as many as 600,000 civilians still trapped in IS-controlled areas of Mosul.

Statements came a The day after Iraqi forces by said That a “large by mass grave” Had been found a near the city.

It contained the remains of hundreds of “civilian prisoners who were executed by (IS) gangs after they controlled the prison during their occupation of Mosul”.

WASHINGTON, March 12, 2017 — Indigenous Iraqi and Syrian forces have made tremendous progress taking the fight to the Islamic State of Iraq and Syria, and Americans should be very proud of the role played in the effort by a small number of U.S. troops, the chairman of the Joint Chiefs of Staff said during an interview.

When Marine Corps Gen. Joe Dunford took over as chairman in October 2015, ISIS had taken vast portions of Iraq and Syria and sought to establish a caliphate. The counter-ISIS strategy he inherited sought to train local forces to combat the terror organization.

This meant small numbers of American and coalition troops would work with Iraqi and vetted Syrian forces. Coalition air assets, special operators and artillery units would support the campaign.

Iraqi forces pushed back ISIS in Ramadi and Beiji and are now pushing into western Mosul — the largest city taken by ISIS. The strategy is working, the chairman said, and it’s because young American service members are doing the hard work every day to make it happen.

“If you think of the relatively small number of Americans that had deployed to Iraq over the past 18 to 24 months,” he said, “… if you think about how hard they had to work in conjunction with Iraqi security forces to make sure we learned the lessons from Ramadi and Anbar province … and applied those lessons with the right capabilities in Mosul; I’ll just tell you I am proud of the force that has done that.”

There still remains much to do in Iraq, the general said, and he is taking nothing for granted.

In Syria, indigenous forces are isolating Raqqa and pushing back well dug-in ISIS forces on all fronts. There, the progress has been dependent on an even smaller number of Americans who worked to recruit, train and strengthen counter-ISIS forces.

“We sent those guys into an incredibly complex environment,” Dunford said. “We told them to go in collect intelligence, develop relationships, vet people and identify people willing to take the fight to the enemy, train those people, equip those people, support those people, and win.”

And those special operations forces and U.S. Air Force personnel did it — day after day, little by little, and under extreme circumstances, the chairman said.

“The fact that we are now talking about divergent political challenges, the fact that we are now addressing questions of what happens after Mosul or Raqqa, we shouldn’t lose sight of the fact that it is a reflection of the members of the joint force that have actually enabled the indigenous force to take the fight to the enemy,” Dunford said. “Now we have the political opportunities that we didn’t have two years ago to establish the framework for long-term peace and stability, and we owe it to them.”

{Arbil: Euphrates News} president of Iraq’s Kurdistan region, said Massoud Barzani, on Sunday, “Baghdad represents a strategic depth.”
He said during his meeting with a political delegation from Baghdad : “We believe indialogue and mutual understanding, we will build a border Kan and not with blood and differences.”

He praised Barzani , head of the National Alliance and positions, stressing “Without the brother of Mr. Ammar al – Hakim of the Kurdistan Democratic Party withdrew all of Baghdad , ” .anthy

Joint Special Operations Command confirmed on Sunday that Daesh terrorist is trying to convince the public the existence of violations of the security forces in the liberated areas, Pfidyohat fabricated broadcast in excerpts of social networking.

A spokesman for the joint operations Brigadier General Yahya Messenger, in a statement received / balances News /, a copy of “Daesh It is supported by trying to convince the public the existence of violations of the security forces or the popular crowd in the liberated areas by spreading fabricated videos in social networking sites it produces groups terrorist or prejudiced views Obgdtha victories of the security forces. ”

The Messenger, “The Joint Special Operations Command monitor these videos and analyze and verify the correctness or not,” noting that “initial investigations show most of these videos depicting in unknown locations and are fabricating lies therein.”

He pointed out that “counterfeiting the facts vary by wearing people who show the uniforms of security forces and made to hide the faces of the actors landmarks process through photography and this shows that the places imaging is still in the darkness Daesh and will come out by the light of the victory soon,” .anthy 29 / S 5

BAGHDAD (AP) — The remaining western Mosul neighborhoods held by the Islamic State group are now completely surrounded and IS has lost more than 60 percent of the territory the militants once held in Iraq, according to a senior coalition official.

“ISIS is trapped,” Brett McGurk, the special presidential envoy for the global coalition against IS, told reporters in Baghdad Sunday, using an alternative acronym for the Islamic State group. He told reporters the Iraqi army had taken control of the last road leading out of Mosul late Saturday night.

Iraqi forces are currently fighting IS in western Mosul after declaring the city’s east “fully liberated” in January. The operation to retake Mosul was launched in October more than two years after the extremists took control of Iraq’s second largest city.

“Mosul’s liberation is increasingly in sight albeit with increasingly difficult fighting ahead,” McGurk said, adding that Iraqi forces are retaking “some of the most difficult ground that we knew would have to be reclaimed. They’re doing this in a dense urban environment facing a suicidal enemy that’s using civilians as shields.”

Coalition air support has been pivotal to Iraq’s fight against IS, helping Iraqi forces slowly claw back territory throughout Iraq’s western Anbar province and up the Tigris River valley to Mosul. In addition to helping Iraqi forces retake territory, McGurk said the U.S.-led coalition has killed 180 IS leaders since the campaign against the militants began more than two years ago.

IS overran Mosul in the summer of 2014 and swept across large swaths of the country’s north and west. At the height of the group’s power in Iraq, IS controlled nearly a third of the country. 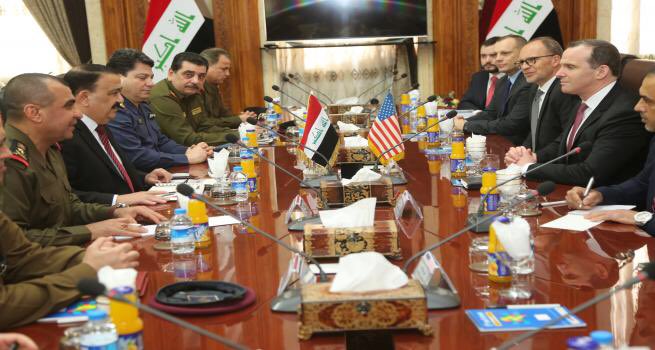 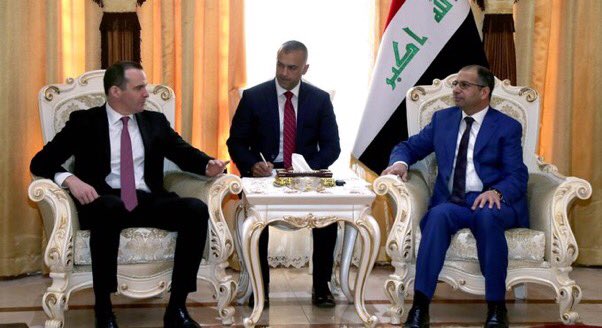