(Reuters) Islamic State has released dozens of prisoners held in jails in the districts of the northern Iraqi city of Mosul that remain under its control, residents said on Saturday.

The release of the prisoners on Friday is another sign that the militants are being overwhelmed by the U.S.-backed Iraqi offensive that started on Oct. 17 to dislodge them from Mosul, their last major city stronghold in Iraq.

Islamic State has lost most cities it captured in Iraq in 2014 and 2015. It declared a caliphate that also spanned parts of Syria from Mosul in 2014.

Among those released were people who had been caught selling cigarettes, violating a smoking ban, or in possession of a mobile phone and therefore suspected of communicating with the outside world, the residents said.

Iraqi forces dislodged Islamic State from the eastern side of Mosul in January, and on Feb. 19 launched the offensive on the districts located west of the Tigris river.

State-run TV on Friday said about half western Mosul has been taken back from the militants who are besieged in the old city center and districts to the north.

One of the men released on Friday said two militants got him out of a basement where he was held captive with other people, blindfolded the group and drove them away in a bus.

“After driving a distance, we stopped and they told us to remove the blindfolds and then they said ‘go, you are free,’” he said by phone, adding that about 25 prisoners were on the bus.

The man, who requested not to be identified, indicated that he had spent two weeks in prison for selling cigarettes.

One Mosul resident said his brother had suddenly reappeared at the house on Friday after spending a month in captivity for possessing a mobile phone.

#MosulOffensive: #Iraq‘s Federal Police celebrating victories in #Mosul with graffiti: “We promised and we fulfilled.” 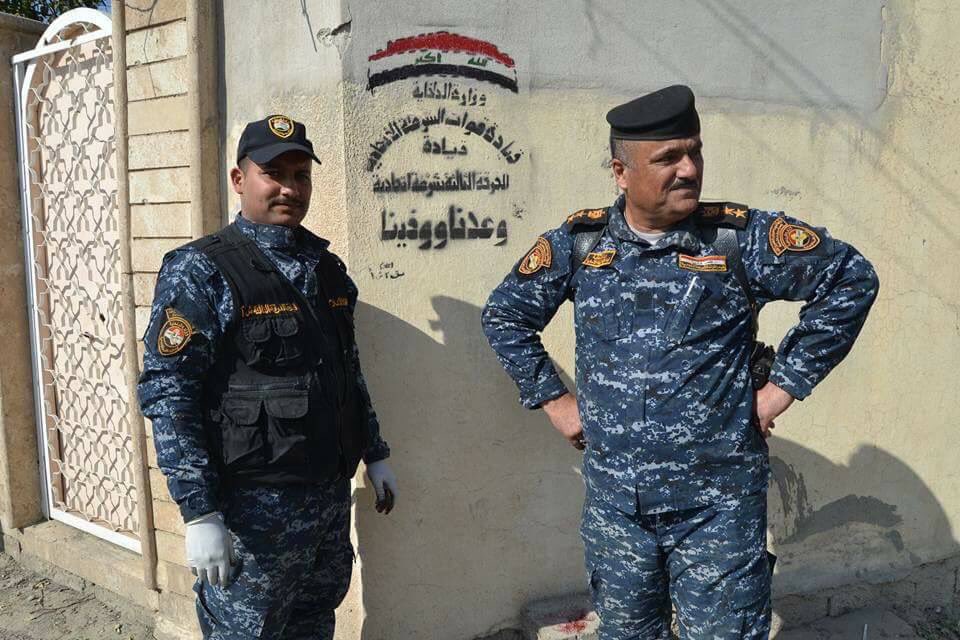 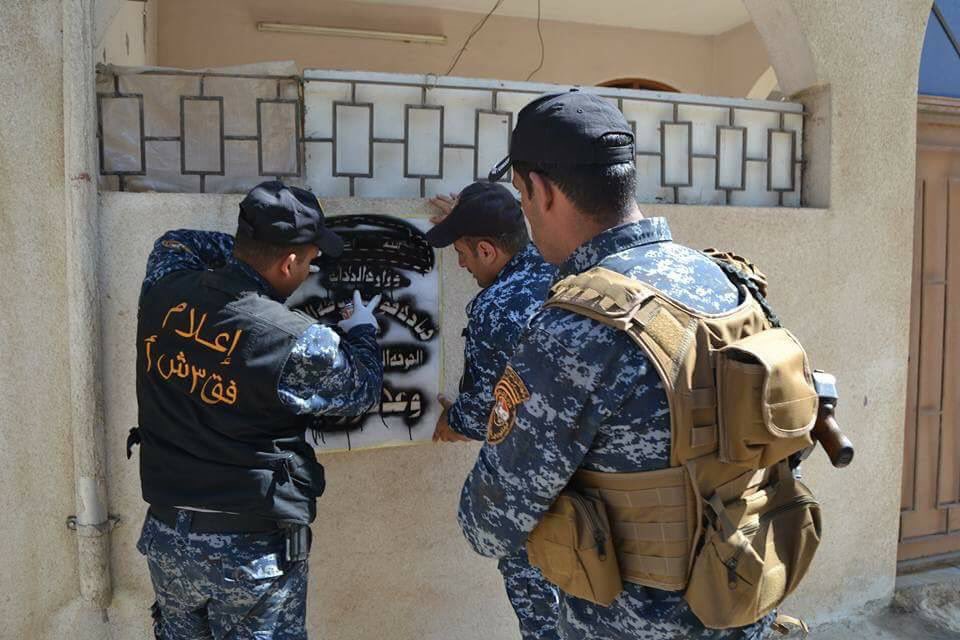 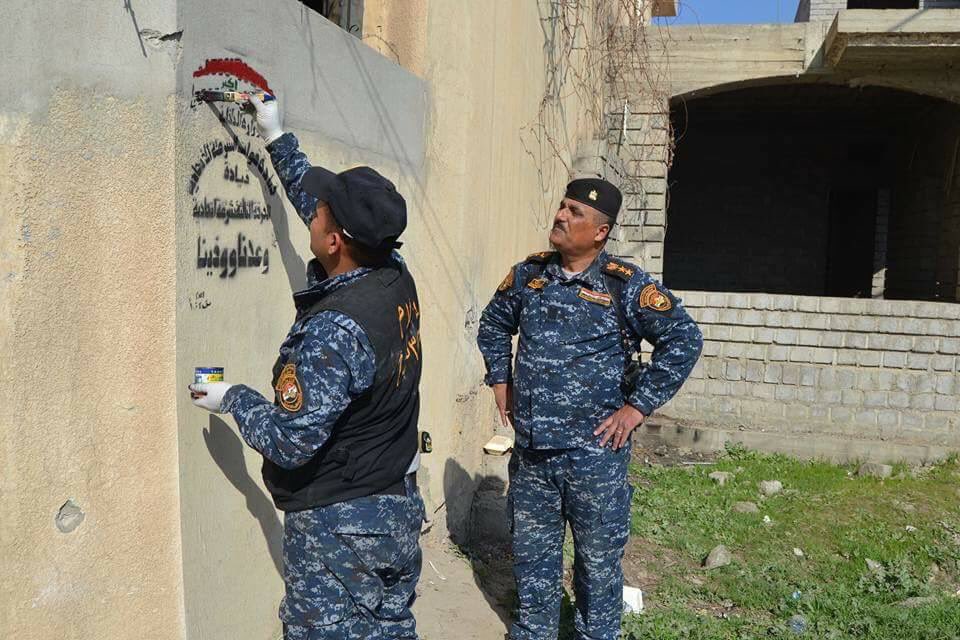 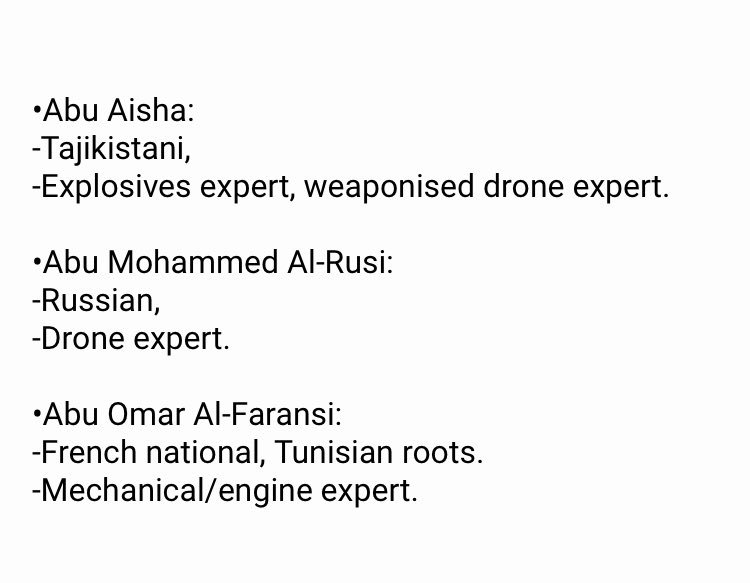 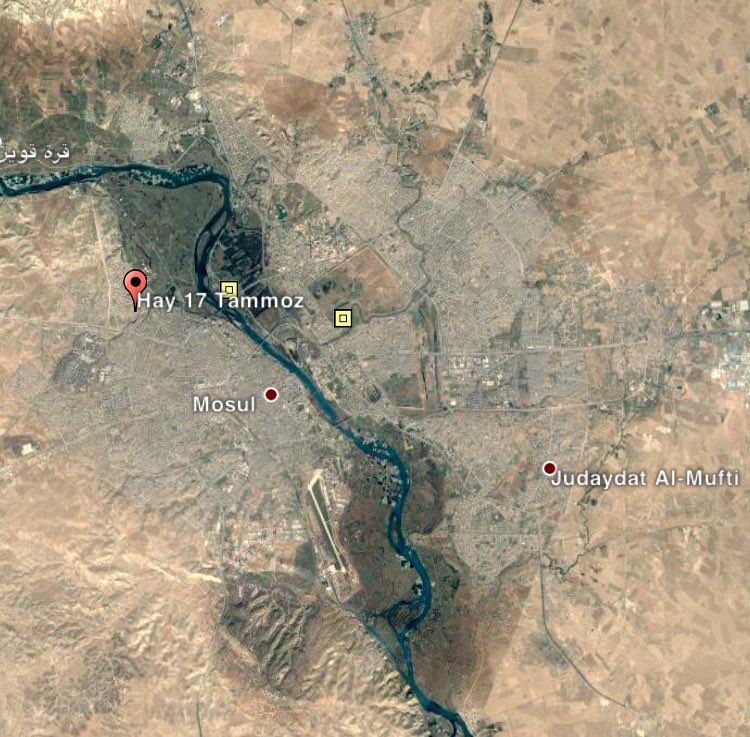 {International: Euphrates News} a US federal court refused to halt new immigration decision issued by US President Donald Trump, saying that lawyers who refuse to this procedure, they provide the most comprehensive documentation of the Court.
And challenged states led by Washington and Minnesota to Executive Order issued by Trump initially in January, which sought to prevent the entry of passengers from seven countries , predominantly Muslim and the suspension of the entry of refugees into the United States.
The judge issued a James Robert Seattle District Court is the first restrictive policy in the last month when Trump has issued a new version on Monday includes only six opponents sought to stop the execution , too.
Robert refused the application of the first ordered the immigration decision Aljdid.anthy

[Where-Baghdad]
asked Parliament Speaker Salim al – Jubouri , a representative of the Government House to set a date to attend the Prime Minister Haider al – Abadi to answer oral questions submitted by a number of members of the Board of Alnwab..itba
http://www.alliraqnews.com/modules/news/article.php?storyid=59368

Held on Saturday, at the Institute, “the progress of the development policies,” a symposium chaired by Economic Adviser to the Prime Minister, the appearance of Mohammed Saleh, to discuss the achievements in restoring stability to Mahrrhmn Daesh cities and the return of displaced families to inhabit areas.

And it included the seminar which was attended by “Journal News”, a number of important economic figures, including the secretary general of the Council of Ministers, “Mahdi Keywords.”

The meeting discussed the situation of the liberated cities Daesh and restore security and stability to them in addition to discussing the situation of displaced people and the possibility of their return to their areas.

For his part, Secretary General of the Council of Ministers stressed that the “four million displaced people and displaced are in a very bad situation, pointing out that the displaced are not a case of individuals, but a community issue and there must be a survey to assess the food measure gauge, referring to the institutions concerned about the displaced scans for three times the food security situation in the importance and its association with the return of stability in the liberated areas, as has been secured $ 300 million for the rehabilitation of the liberated areas of Daesh.

He Keywords that next week’s conference will be held in Washington in the hope that the grant of up to about one billion dollars from donor countries.

Called on Prime Minister Haider al – Abadi, Saturday, Iraqis who fled to Germany to seek asylum to return to their homeland, while noting that the war in Mosul will end very soon.

Ebadi said in an interview with the newspaper ‘Bild’ German edition of the day, that ‘in our interest to our citizens come back, do not want to be forced to leave the country and become refugees’, stating ‘We are returning the reconstruction of areas and we want to enable people to live here again.’

In response to a question on whether it calls its own citizens in Germany to return, Abadi , ‘Yes, I do , he said, they have to return, this is in our interest. “

He predicted Abadi output regulation ‘Daesh’ of Mosul soon, saying that ‘ the war in Mosul will end very soon, and we arrived in the western part to the almost center of the city’, pointing out that the ‘process is very successful and the enemy either escape or be killed, and that troops wipe out the entire organization and will spend Once the ideology disarm the alleged control of the capital. ‘

And on whether the Iraqi government is able to provide security for citizens, Abadi said , ‘Look at what is happening in Mosul, expunged terrorism’, pointing out that ‘ the citizens they can return.’

Revealed a local source in Nineveh province, on Saturday, the leader of al ‘Daesh’ Abu Bakr al-Baghdadi appeared near the Iraqi border from the point of Syria towards the common border, as he emphasized that al – Baghdadi looked frail and unable to speak in nature because he suffers from injuries suffered earlier, He is adding that he accused the ‘Ansar Boukzl immigrants’.

The source said in a press statement, that ‘ the leader of al Daesh Abu Bakr al-Baghdadi appeared briefly in between Iraq and Syria on the one hand Albu Kamal , where moves in this area that the organization is still controlled by the border region’, noting that ‘al – Baghdadi began unable to speak and it moves in a limited car is subject to the protections as previously similarities to pry him ‘.

The source , who asked not to be named, said : ‘al – Baghdadi , the collection of a number of supporters of the tribes loyal to him and those speeches criticizing the lack of support of supporters of Iraqi elements Daesh, where battles are run by immigrants and foreign Arab militants’.

The source continued, that the ‘minute intelligence indicates that al – Baghdadi is moving in the desert region stretching between Anbar and Nineveh toward Iraqi and Syrian territories. “

Revealed the Foreign Ministry on Saturday, said the Iraqi delegation will travel to Saudi Arabia to discuss a number of issues of common interest between the two countries.

He said ministry spokesman Ahmed Gamal said in a statement that “a delegation from the Iraqi Foreign Ministry, will travel to Saudi Arabia on Sunday for an official visit to discuss a number of issues of mutual interest.”

He said the beauty, that “the delegation, which will be headed by Undersecretary older Nizar goodness of God will be with the Saudi side political consultations to discuss a number of developing bilateral relations between the two files in addition to some of the issues related to the border ports and trade exchange.”

It is said that Saudi Foreign Minister Adel al-Jubeir visited Iraq (February 25, 2017) to discuss a number of issues with Iraqi officials, as told Iraqi Prime Minister Haider al-Abadi to nominate a new ambassador to the Kingdom in Baghdad.

Revealed Foreign Minister Ibrahim al-Jaafari, Saturday (February 25, 2017) for the assignment Undersecretary visit Saudi Arabia “soon” to follow up on activating talks between Baghdad and Riyadh, technical issues, calling on the UK to confirm its stance toward existing Turkish troops on Iraqi territory.

Kurdistan Region President Massoud Barzani met with high-level delegation coming from the Iraqi capital Baghdad that included the leaders of the Iraqi National Alliance and a number of Sunni figures.

Kurdish sources confirmed that the delegation, which arrived in Arbil to discuss with Barzani, the independence of the Kurdistan region and its future, likely to address the meeting to war against Daesh and management of the province of Nineveh files during the post-Daesh stage, pointing out that the meeting is aimed at finding a suitable platform to bring Iraqi political parties for his part said a spokesman for the presidency of the Kurdistan region Omid morning that the National Alliance delegation is composed of representatives from parties outside the coalition and also includes the leaders of the Sunni Arabs, pointing out that the meeting will focus on the development of a new formula for relations between Baghdad and Erbil through dialogue.