Media announced military cell, on Tuesday, the federal police and rapid response able to edit the entire government complex in central Mosul.Quoted the cell, in a statement, “tomorrow Press” received a copy of it, the commander of coming operations Aaninoy Lt. Gen. Abdul Amir Rasheed Yar God as saying that ” the federal police and rapid response liberalized government building of Nineveh province and seized control ofthe second bridge (Bridge Freedom) and raised the Iraqi flag over its buildings. “ 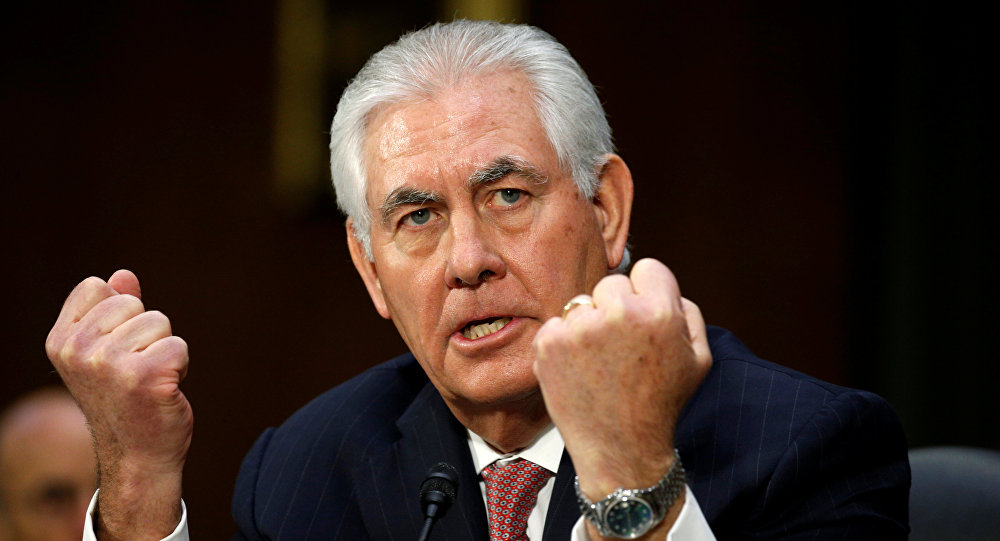 US Secretary of State said Rex Tillerson, on Monday, we exclude Iraq from the banned states on its citizens entering the United States in the new Executive Order because the Iraqi government is working to confront terrorism.

And announced the US Department of Homeland Security, said on Monday that US President Donald Trump’s decision, that had banned the entry of citizens of the six countries, and the suspension of refugee reception program.

Just as the decision does not apply to persons who have obtained visas to enter the United States before January 27 last, or temporary residence “Green Card.” Nor would it be canceled visas issued.

President Trump signs a revised executive order that bans travelers from six Muslim-majority countries from getting new U.S. visas. The order left Iraq off the list. (Carlos Barria/Reuters)
By Mustafa Salim and Kareem Fahim March 6 at 12:17 PM
IRBIL, Iraq — Iraqi officials on Monday praised the Trump administration’s decision to exclude Iraq from a list of Muslim-majority countries whose citizens will be temporarily banned from entering the United States, calling it an “important step in the right direction.”

A previous executive order had barred Iraqis from traveling to the United States, along with citizens of six other countries. It had provoked widespread anger and disbelief in Iraq, a country torn apart by cycles of conflict since the U.S.-led invasion in 2003 and a front-line state in the battle against the Islamic State militant group.

At the time, Prime Minister Haidar al-Abadi called the order — which had language suggesting that Christians and minorities would be exempted from the ban — an “insult.”

A fact sheet on the revised order sent to Congress on Monday said the Iraqi government had taken steps “to increase their cooperation with the United States in the vetting of Iraqi nationals.”

An Iraqi Foreign Ministry statement said the decision “reinforces the strategic alliance between Baghdad and Washington in many areas, particularly the fight against terrorism.”

The revised order comes as the United States is stepping up its involvement in the fight against the Islamic State in Iraq, including by sending hundreds of military advisers to front-line positions with Iraqi security forces wrestling for control of the northern cityof Mosul. The role and influence of the vice president, not enshrined in any law, is determined in any administration by three things: his direct relationship with the president, his building of a personal portfolio of issues, and the effectiveness of his team. When it comes to foreign policy, Vice President Pence is quietly succeeding on all three fronts.

Inside an administration that is characterized by several power centers, Pence must navigate complex internal politics while serving a president who has an unconventional view of foreign policy and the United States’ role in the world. Pence, a traditional hawk influenced heavily by his Christian faith, is carefully and deliberately assuming a stance that fits within the president’s agenda while respecting the prerogatives of other senior White House aides who also want to play large foreign policy roles, according to White House officials, lawmakers and experts.

But Pence’s growing influence on foreign policy is increasingly evident. The vice president was deployed to Europe last month to reassure allies that the United States will stay committed to alliances such as NATO, despite President Trump’s calls for Europeans to pay more for common defense. During Japanese Prime Minister Shinzo Abe’s recent visit, Trump announced that Pence and his Japanese counterpart would lead a new dialogue on U.S.-Japan economic cooperation.

“The vice president seems to be building on his foreign affairs experience, finding a niche in that arena,” said House Homeland Security Committee Chairman Michael McCaul (R-Tex.), who served with Pence in Congress. “He brings a level-headed steady hand to the foreign policy of the administration. He’s also building up his own team.”

Inside the White House, Pence is in the room during most of the president’s interactions with world leaders. He receives the presidential daily brief. As head of the transition, he was instrumental in bringing several traditionally hawkish Republicans into the top levels of the administration’s national security team, including Director of National Intelligence-designate Dan Coats, CIA Director Mike Pompeo and U.N. Ambassador Nikki Haley.

Trump and Pence met with Haley last week just before the United States decided to confront Russia and the Syrian regime at the U.N. Security Council about Syrian President Bashar al-Assad’s use of chemical weapons. The move seems to run counter to the White House’s drive to warm relations with Moscow, but Trump decided, with Pence’s support, that it was important and necessary, officials said.

Pence’s national security team is also in place and humming. Just days after the inauguration, Pence announced that he had brought on Andrea Thompson as his national security adviser. A former military intelligence officer with extensive combat zone experience, she also worked for the House Homeland Security and Foreign Affairs committees. Most recently, she worked for the firm run by retired Gen. Stanley McChrystal.

“I wouldn’t say there’s an ideological bent to her, she’s a professional, an excellent briefer with command of the intelligence world,” said McCaul.

Thompson’s deputy is Joan O’Hara, former general counsel for McCaul’s committee. They lead a team of senior advisers who manage issue areas delineated by region or function, similar in organization to the National Security Council staff but on a smaller scale. Pence’s national security team is mostly professionals detailed from other agencies.

Pence is seen by many in Washington as a figure who might stand up for the traditionally hawkish views he espoused while in Congress, a proxy of sorts for the GOP national security establishment. But those close to Pence say his stance is more nuanced. Pence is committed to advocating Trump’s foreign policy objectives, not his own, and endeavors to stay above the fray of most internal disputes.

“He definitely brings a different perspective, but he’s nuanced and subtle in how he engages,” one White House official said. “He’s adapted somewhat, at least in terms of not putting his views above those of the president.”

Pence preserves his credibility with the president so it can be most effective when deployed. The chief example was when Pence personally spoke to Trump about removing national security adviser Michael Flynn, who had lied to him about conversations with Russian officials during the transition.

“When Flynn was in the NSA role, there was no center of gravity where traditional Republicans could come together on policy,” said Bruce Jones, vice president at the Brookings Institution. “In the days since Flynn exited, Pence has occupied more of that space.”

It’s a tricky balancing act, but if Pence can keep the president’s trust, stay above the internal politics and build out his portfolio, he will be able to continue to increase his influence on foreign policy inside the White House and on the world stage.

Sent US President Donalnd Trump, a letter to the President of the Kurdistan region, Massoud Barzani, included the emphasis on cooperation and partnership between the two sides.

According to a statement of the Presidency of the Kurdistan Region, received “Sky Press”, the “Donald Trump, President of the United States, sent a message to President Barzani stressed the importance of cooperation and partnership between the two sides, and included a letter also confirm Trump in maintaining the common interests in maintaining peace, stability and growth “.

Relations between the US and the Kurdistan Region a remarkable development, especially since the war began to organize Daesh which has seen great support from Washington.

The head of the Kurdistan region, Massoud Barzani, said that people Alchordstan “waiting for the US president, Donald Trump, support for their legitimate rights. And so in a congratulatory message sent on the occasion of Trump win the presidential election in America.

Khandan – chaired by Iraqi Prime Minister Haider al – Abadi on Monday, a meeting of the committee tasked by the Council of Ministers to discuss the issue of financial disclosure covered by the presence of members of the committee (Chairman of the Supreme Judicial Council and head of the Integrity Commission and the President of the State Council).

The Abadi , according to a statement issued by his press office on ” the importance of working to maintain public money and the fight against corruption, and to adopt the necessary legal measures to ensure this , including requiring precise activation of the laws and decrees to deter and accounting tempted to encroach upon the public money.”

Abadi also stressed the “start taking legal action against anyone who tampers state property or property of citizens of the land and other real estate.”

The statement noted that the meeting also discussed the re – drafting of filling financial disclosure form instructions, and decides to offer amendments that have been deliberated upon at the Council of Ministers to take the appropriate decision towards them.

Straightforward: to deny a source familiar with the CBI, the decline of foreign reserves has to $ 49 billion.

The source for “live”, the bank reduced the reserve requirement on deposits of banks, not lower foreign reserves.

The source said, that the bank deliberately reduced the cash reserve on bank deposits from 15% to 10% at the end of last year.

The source pointed out that it was reducing the cash reserve on deposits of banks; to improve the liquidity of the banking system, and to provide small loans for the development of the Iraqi economy, and tackling unemployment.

Iraqi forces took control of the electricity directorate in the right side of the connector with the federal police announced the release of the full control of the organization “Daesh” terrorist police directorate building and the court complex in the city.

Federal police said in a statement, “The federal police cuts and rapid response to regain control of the water and sewer Mosul Directorate in Aldndan building and flying the Iraqi flag above it.”

The general commander of the Iraqi armed forces, Prime Minister Haider al-Abadi, announced (February 19, 2017), the launch of editing operations right side of the city of Mosul.