{Baghdad} Euphrates News US general said on Saturday that security forces progressing according to plan and well in the battle to liberate Mosul.
He said Maj . Gen. Rick Uribe , deputy commander of coalition ground forces, ” aregoing according to schedule well, and we are confident that the Iraqis are learning every day, and we are confident they will continue their progress well.”
He added, “There is no doubt that as we get closer to the city center has become the most difficult situation because of the difficulty areas will you make the Iraqi forces.”
He noted the US General, that “Daesh controlled Tal Afar, and has a large number are still able to defend the city , ” .anthy
http://alforatnews.com/modules/news/article.php?storyid=139468 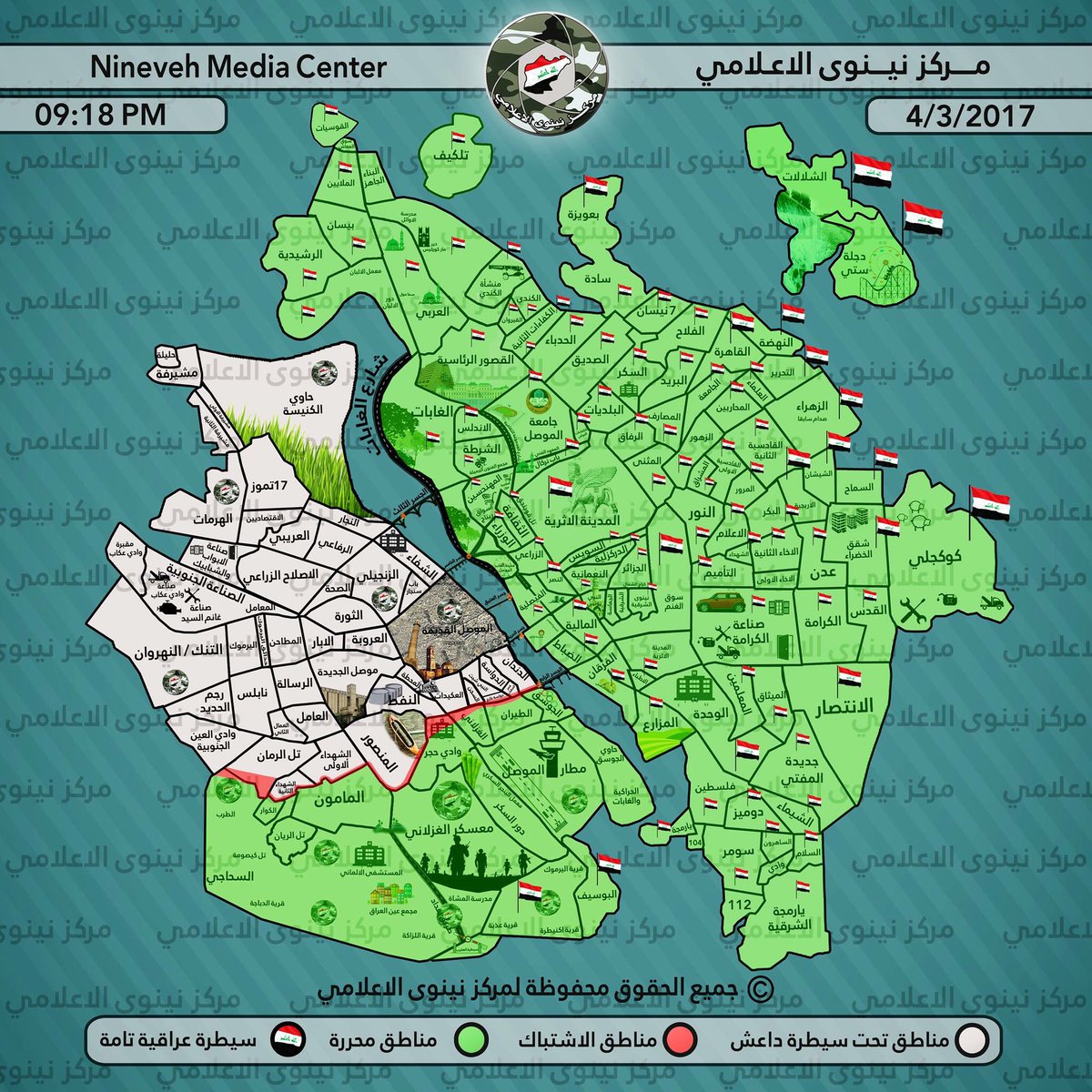 #ISIS thought they could hide one of their gun trucks in people’s home. Nope, #Iraqi Air Force have a missile for that.

BAGHDAD (Reuters) An Iraqi local source in Nineveh, today, that the leader of the “Islamic state,” Abu Bakr al-Baghdadi, a maximum of Iraqi leaders from the Battle of Mosul, the last administration because of the large regulation losses.

The source said in an interview with the agency, “Alsumaria News”, “Islamic State leader Abu Bakr al-Baghdadi issued a decree exempting comprehensive Iraqi commanders of the final battle west of Mosul management by giving the task of defending the rest of the neighborhoods to the Arab and foreign leaders.”

The source, who asked not to be named, said: “Al-Baghdadi is do not trust their leaders of Iraqis, especially after a big loss for the organization and regulation loss of defensive mission lines managed security forces from storming in a matter of hours.”

The general commander of the Iraqi armed forces, Haider al-Abadi, had announced in February 19, 2017, for the start of operations edit the right side of the city of Mosul, while the security forces managed to free several areas from the control of the “Islamic state.”

Twilight News / US general said on Saturday (March 4 / March 2017) that the Iraqi forces are progressing according to plan in its battle to regain control of the city of Mosul to organize the Islamic State “Daesh”, but that the fighting becomes more fierce with the continuation of this progress. The deputy commander of coalition ground forces , Gen. Rick Uribe ” are going according to schedule well, and we are confident that the Iraqis are learning every day and we are confident they will continue their progress well.”

And it offers a coalition led by the United States Air training and ongoing support to Iraqi forces in their fight to expel the extremist organization from Mosul in the operation , which began in October / October.

Iraqi forces managed to regain the eastern side of Mosul , which was a stronghold for the organization of the Islamic state, and is making progress in the most densely populated western regions.

Uribe added , “There is no doubt that as we get closer to the city center, the situation has become harder and harder because of the difficulty areas will you make the Iraqi forces.”

It is known as the oldest areas of the city that are overcrowded buildings and narrow streets that what would make it even more fierce fighting.

This week cited Gen. Stephen Townsend , leader of the coalition forces against al – Islamic state that about two thousand members of the organization are still in the west of the city and around.

Iraqi air force and targeting coalition aircraft extremists as they fled the city with many of them went to the nearby border with Syria city of Tal Afar.

“There are large numbers are still able to defend the city.”

{Baghdad: Euphrates News} killed airline Air Force, a number of terrorists Daesh west of Mosul.
A statement by the Ministry of Defense, the agency {Euphrates News}, a copy of which, ” The army airline received carried out several sorties combat to assign formations popular crowd, and the face of painful and precise strikes on gangs and gatherings Daesh terrorist, that killed 15 terrorists , including a commander in the ranks Daesh by accurate intelligence. ”

It was also “destroy terrorists carrying wheel containing mono and others, as well as addressing Ohaditan Walker and destroy terrorists sheltering in the villages of Mehrab Palace and Tel Saadane within the western hub of operations” .anthy

The head of the Iraqi Islamic Supreme Council Ammar al – Hakim, said on Saturday that “the year 2017 will be a decisive year for an end to terrorist Daesh and install the democratic path of the country ‘s guerrilla file.

He said al – Hakim during a meeting with a delegation seats Iranian headed by Chairman of the Committee of Construction and Economy in the Iranian Shura Council Mohammad Rezaei seen by all of Iraq [where] it , “Let us to strengthen bilateral relations between the two neighboring countries, especially in economic fields, and exchange of experiences between the Iraqi and Iranian institutions , the Parliamentary”.

He pointed out that ” the Iraqis are close to reap the fruits of their patience, and in 2017 a decisive year in the articular and the future of Iraq, where near the end Aldaasha military presence and install the democratic process , ” he said.

{Baghdad} Euphrates News broke the popular crowd, Saturday, the depth of the terrorist gangs Daesh Makhoul in the mountains of northern Salahuddin province.

According to a statement to inform the crowd, and the agency {Euphrates News} received a copy of it, that “the popular crowd forces carried out a qualitative operation, where special forces infiltrated deep into enemy territory and killed 12 element of them and burned their headquarters in Makhoul Mountains, as well as the destruction of the headquarters of them and control.” .is over