Baghdad
called on the prime minister for economic affairs adviser to the appearance of Mohammed Saleh, Sunday, to set up a new bank for trade finance to the private sector, while stressing the need for separation between monetary policy and the financing of foreign trade.

Saleh continued that ” the source of hard currency Mtota of oil dispose of them and must rationally and central location , and therefore, the trade must be regulated by the government, but without restriction , “pointing out that” the trader not to trade bills and claims are incorrect result of obtaining the dinar illegally and some of them obscure. ”

He emphasized the benefit of the” Chapter between monetary policy and the central bank intervened to preserve the stability of the exchange rate and the trade finance needs to consider the strength and power in light of a difficult situation at the moment. ”

escalated accusations over the currency that has cast a shadow on the sale of the dollar in the domestic market prices of smuggling operations, while lawmakers have demanded the necessity that the government take the initiative to stop the sale of currency operations in the central bank auctions, others stressed that Iraq loses big money due to smuggled daily out of bounds, on the pretext of foreign trade.

[Oan- follow] the
source of the Organization of Petroleum Exporting Countries said OPEC] The WHO experts wrapped up their meeting on Monday without an agreement on the specific details of the planned cut in oil production for each state.
It is scheduled to put forward a proposal to cut production during the WTO ministerial meeting in Vienna on Wednesday.
As another source of OPEC said on Monday that the meeting of experts did not solve the disputes relating to the Iraqi and Iranian production levels.
http://www.alliraqnews.com/modules/news/article.php?storyid=53663

[Oan- up]
announced that the US State Department said Monday that the international coalition backers have managed to recover 56 percent of Iraq ‘s territory and 27 percent of Syrian territory from Daesh.
This information came in the final statement of the talks , the 68 members of the international coalition to combat the ambassadors of the countries [Daesh] led by the United States, which was held in Washington.
He said the international alliance of US special presidential envoy Brett Macgork told reporters after the talks that the number of militants [Daesh] decreases, the lowest now since more than two and a half years.
He Macgork that [Daesh currently can not compensate or fill the shortage of commanders and armed men who aremissing during military operations.
He stressed that most of the leaders and deputy leader of the [Daesh] Abu Bakr al – Baghdadi had been killed ,adding : “it ‘s a matter of time until he meets al – Baghdadi , the same fate . ”
he explained that the military and intelligence operations carried out by the international coalition has been animportant factor in reducing the income for Daesh.
http://www.alliraqnews.com/modules/news/article.php?storyid=53662

BAGHDAD – The Journal News
Search Prime Minister Haider al-Abadi, on Monday, with the parliamentary finance committee to finalize the budget bill passed in parliament ahead.

Committee Chairman MP Mohammed Halbusi in a statement, said that the meeting discussed the important and accurate details related to the budget law and the means of its own legislation on the legal side and in line with the country’s economic conditions.

For his part, the prime minister expressed his understanding of the Committee’s observations and praised adhering to bring out the law in a realistic and unconstitutional and achieve the necessary efficiency in the federal budget and flexibility.

The President of Iraq’s Kurdistan Regional Government, Nechirvan Barzani, was ready source of oil delivered to the federal government in Baghdad, against the payment of salaries of employees of the province, to welcome the Iraqi Oil Ministry this step, which is a breakthrough in the list between Baghdad and Erbil oil crisis.

He said Assem Jihad, a spokesman for the Oil Ministry, said the ministry welcomes the announcement by the Government of the Kurdistan oil extracted delivery by region and province of Kirkuk, some adjacent fields, and exported in accordance with the established legal mechanisms by the Iraqi Oil Marketing Company “Sumo”.

Jihad said in a statement today that “the Prime Minister Haider al-Abadi, said in more than one occasion the government is ready to pay the salaries of the staff of the region in the event of oil deliveries.”

He pointed out that the export of the KRG oil extracted from fields in the region and some of the Kirkuk oilfields, independently and without the knowledge of the Federal Government and the Ministry of Oil, and sell it for less than prices adopted by the company “Sumo” in foreign dealings, damaging the financial revenue for the country and for the region.

He continued that ” the non – delivery of the province fiscal revenue realized from the sale of crude oil the government to the Federal Treasury, led to unable dues financial territory disbursement by the government , according to the federal budget , while he was supposed to government territory to have sufficient revenue to pay the salaries.”

A spokesman for the Ministry of Oil that the federal government and the Oil Ministry hopes to reach with the Government of the Territory to the new mechanisms binding on the parties on oil exports.

The Kurdistan Regional Government announced last July, reported a net income from the sale of crude oil worth $ 2.34 billion in the first half of the year 2016.

These revenues do not meet the needs of the region to pay its employees and retirees’s 1.4 million people are paid salaries of $ 4.38 billion in the six months by $ 730 million a month, according to official data.

The region sold about 85 million barrels of crude oil from the fields, in addition to some of the Kirkuk oilfields , to buyers directly and independent of the central government in Baghdad over the past six months.

It expressed the Iraqi Oil Ministry welcomed the statementby the President of the Kurdistan Regional Government Nechirvan Barzani and the latter over the transfer of the oil extracted from the fields of the region and some of the province of Kirkuk fields to the federal government in exchange for payment of salaries of employees of the province.

According to a statement of Userah seen by Digital Media NRT Roudao Media Network, that “The ministry reiterates the importance of the receipt of oil extracted from the fields of the region and some of the Kirkuk oilfields and export, according to official and legal mechanisms used by the Iraqi Oil Marketing Company (SOMO) in terms of accuracy exported quantities of oil crude and revenue generated, which automatically goes to the federal treasury. “

The statement added that “the lack of commitment to Erbil agreement signed with the federal government and its failure to deliver the agreed quantities of crude oil extracted from the fields of the region cause a deficit in the federal budget for the years past.

The statement pointed out that “the Prime Minister Haider al-Abadi announced on more than one occasion the government’s willingness to pay salaries of employees of the province in the case of delivery of oil, but the Kurdistan Regional Government, this mechanism has not been applied, which confirms that the federal government does not assume responsibility for delaying the benefits exchange region and the salaries of the staff.” .

The statement continued that “the provincial government to export oil extracted from the fields of the region and some of the Kirkuk fields independently and without the knowledge of the Federal Government and the Ministry of oil and sell it for less than prices adopted by the oil marketing company in foreign dealings have damaged the financial revenue for the country and for the region.”

The statement emphasized that “the federal government and the ministry keen on alleviating the suffering of the citizens of the region and to speed up the payment of their salaries, hoping the agreement with the provincial government on the new mechanisms and clear obliges the two sides to abide by the agreement and its implementation with high transparency and the benefit to the people of Iraq.”

The head of the Kurdistan Regional Government Nechirvan Barzani announced yesterday at a press conference on the sidelines of the launch of a campaign to combat violence against women that “if Baghdad was ready to send the region’s budget, we are also ready to resolve differences and outstanding issues with it.”

According to Qadir, Abadi had said that the federal government was able to not only provide the monthly wages of all Kurdish civil servants, but pay Kurdistan Region’s budget in full.

Qadir claimed that he and other fellow Kurdish MPs had told the Iraqi premier that his statement was not satisfactory and that he should take actual steps towards solving his disputes with Erbil instead.

Abadi told the parliamentary committee and Kurdish MPs that the government in Erbil earned 20 percent of Iraq’s overall income through its own oil exports “and therefore should be able to pay its civil servants,” Qadir said.

Kurdish leaders have long dismissed such claims by Baghdad as political maneuvering and that in private meetings the Iraqi government, including its PM Abadi, have said that they cannot afford to provide Erbil’s budget as Iraq suffers from severe shortage of cash.

Qadir said that the Kurdish MPs had advised the Iraqi prime minister that the Peshmerga forces were part of Iraq’s defense system and that their budget should not be entangled in the Erbil-Baghdad disputes.

Abadi’s response was that Baghdad has been giving out Peshmerga salaries every month without delay to the amount of 38 billion Iraqi dinars, saiod Qadir.

Shirin Housni, a Kurdish MP and member of the finance committee thought that such remarks from Abadi were only excuses and procrastination on the part of the federal government to avoid giving Erbil its fair share of the budget. 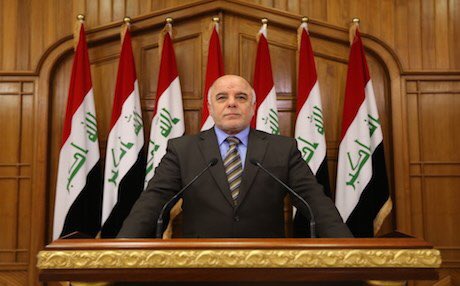 November 28, 2016 in the versions of the center comments on the International Monetary Fund … between the development of economy and finance of corruption in Iraq closed

Council decided to Babil province, on Monday, disabling the official working hours on Tuesday, on the occasion of the anniversary of the death of the Prophet (r), while the decision excluded the service and security services.

The head of the province of Babylon Haider Jaber Wasp in an interview to the (long-Presse), “The Babil Provincial Council decided today, disable the working hours of all government institutions on Tuesday, (28 month zero) on the occasion of the anniversary of the death of the Prophet Muhammad (p.)” .

Wasp and added that “the decision excluded the security and service departments.”

And go every year millions of visitors from across Iraq, especially the Shiite cities of them, to the holy city of Najaf to visit the shrine of Imam Ali (AS) to perform the ceremony of the visit on the occasion.