[Oan- up]
involved girls from different Kurdish factions, and within the Peshmerga forces, in the ongoing battle to restore the city of Mosul from Daesh terrorist gangs.
She says one of the fighters, said: Some of those girls and women warriors Kdmn from the Kurdish side in Iran to help their peers men in the restoration of Kurdish towns and villages that wrung Daesh in the past and see them as an integral part of an independent Kurdish state aspire to. ”
Involved Peshmerga forces in the battle to liberate the province Nineveh, which was launched on 17 October of this.
the President of Kurdistan , Massoud Barzani, the “Peshmerga forces would not enter Mosul city center, and will be limited on the anti – terror apparatus forces and official security forces.”
http://www.alliraqnews.com/modules/news/article.php?storyid=51559

[Oan- Baghdad]
Search Prime Minister Haider al – Abadi in his office Thursday with Democratic Senator Jack Reed , Senior Member of the Armed Services Committee in the US Senate and his war against terrorism and the victories achieved by the Iraqi armed forces and the delegation on Daesh gangs and functioning edit Mosul process.
A statement by the prime minister ‘s office received by all of Iraq [where] a copy of it, the two sides also “train and equip Iraqi forces and international support for Iraq in search.”
Park and Senator Reid , according to the statement , “earned victories over Daesh gangs, renewing their support for the Iraqi government and the servants in the war against terrorism and to train and equip the army and theinstitutional structure of the state , and logistical support. ” He
also stressed Senator Reid on” his country ‘s support for Iraq ‘s sovereignty and territorial integrity ” andexpressed his” admiration for the great development in the capabilities of the Iraqi armed forces. ”
the delegation included both Elizabeth Kink responsible minority in the armed Services Committee in the Senate US Michael Nobelt in the armed Services Committee in the US Senate by Michael Kopkin member of the armed Services Committee in the US Senate.
http://www.alliraqnews.com/modules/news/article.php?storyid=51558

We have got to talk to some officials at the Central Bank of Iraq and the owners of some private banks who looks like it a federal power with the central bank in this matter he … ..tm agreement on the support of the Iraqi dinar and all the power contribution of them in the recovery of the dinar against the dollar, particularly as we are fighting a holy war with the worst of the evil forces in the world and fight terrorism in many parts of Iraq

If it is good news for all Iraqis that the value of the national currency exchange rate of the Iraqi dinar will recover gradually in the next few days, a blessed step commend charge of it and applied by the thought of the Iraqi people and the critical economic situation through which the country.Campaign # dinar rebounding dollar and # Eksh

{International: Euphrates News} jumped price of a barrel of oil “Brent” above $ 50 on Thursday, due to a sudden drop in crude stocks in the United States.
And exceeded the futures of global crude measurement combination “Brent” of $ 50 for up to 50.30 dollars higher 32 cents, and traded as futures of the American WTI at $ 49.36 a barrel , up 18 cents.
Recorded crude stocks in the United States an unexpected drop of 553 thousand barrels in the past week , and we got gasoline and distillate inventories more than expected .anthy
http://alforatnews.com/modules/news/article.php?storyid=130923

MP from the Kurdistan Democratic Party Tariq friend, on Thursday, the Federal Court will decide the request to appeal against the dismissal of Finance Minister Hoshyar Zebari in the next week.
A friend said in an interview with Alsumaria’s News, said that “Zebari presented an appeal to the Federal Court on the withdrawal of confidence session with him in the belief that they violated the constitutional and legal principles”, pointing out that “we are supportive of this view and that the meeting where otherwise unconstitutional and illegal.”
He added that “according to my information, the Federal Court will decide its appeal submitted next week,” noting, “We are awaiting the court’s decision.”
The House Speaker Salim al-Jubouri, on Wednesday (21 September 2016), the Finance Minister Hoshyar Zebari article sue to challenge the lack of conviction Bojobth parliament’s decision.
https://translate.googleusercontent.com/translate_c?depth=1&hl=en&prev=search&rurl=translate.google.com&sl=ar&u=http://www.faceiraq.net/inews.php%3Fid%3D5186427&usg=ALkJrhjesDGyETHtu9rt0x3fzxVE1AeXng

184020 The Iraqi self-defense forces regained control over one of the key Daesh facilities in the western part of Mosul, Al Sumaria TV reports. “The members of the self-defense forces have broke into Daesh headquarters in the western part of Mosul. This is the one of the largest Daesh HQ’s in the city. They raised the Iraqi flag over the building,” the source in the self-defense forces told Al Aumaria TV Channel. © REUTERS/ JONATHAN ERNST Greater Daesh Resistance in Mosul Result of Failure to Use Element of Surprise The source also said that this HQ is very important for the terrorist group. The errorists had left the building before the operation started fearing airstrikes, the source added. Earlier, US Central Command’s Gen. Joseph Votel said that estimated 800-900 Daesh terrorists had been killed since the beginning of the Mosul offensive. On October 17, Iraqi Prime Minister Haider Abadi announced the start of the operation to retake Mosul from Daesh, which is outlawed in many countries worldwide, including the United States and Russia. The offensive is backed by airstrikes by the US-led international coalition.

President #Barzani says “America is not using #Kurds because we are fighting for ourselves, not for them, and we appreciate their help”. 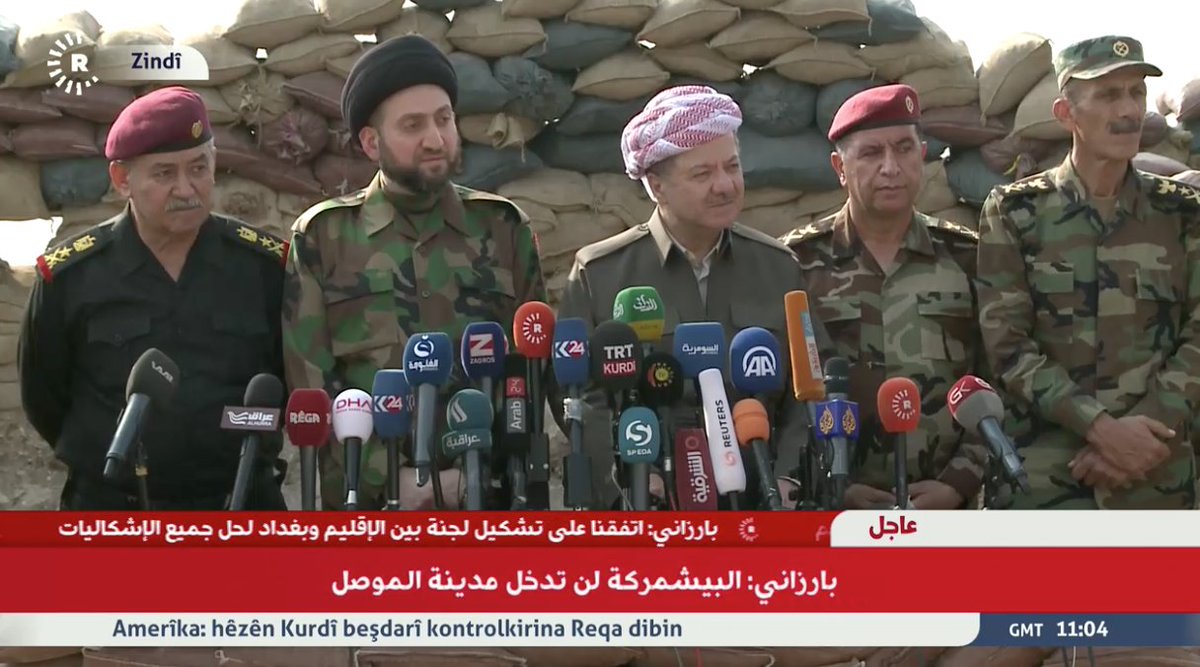 .@Ammar_Alhakeem: We want Turkish support in our fight against #ISIS, but through the approval of #Baghdad. #MosulOffensive 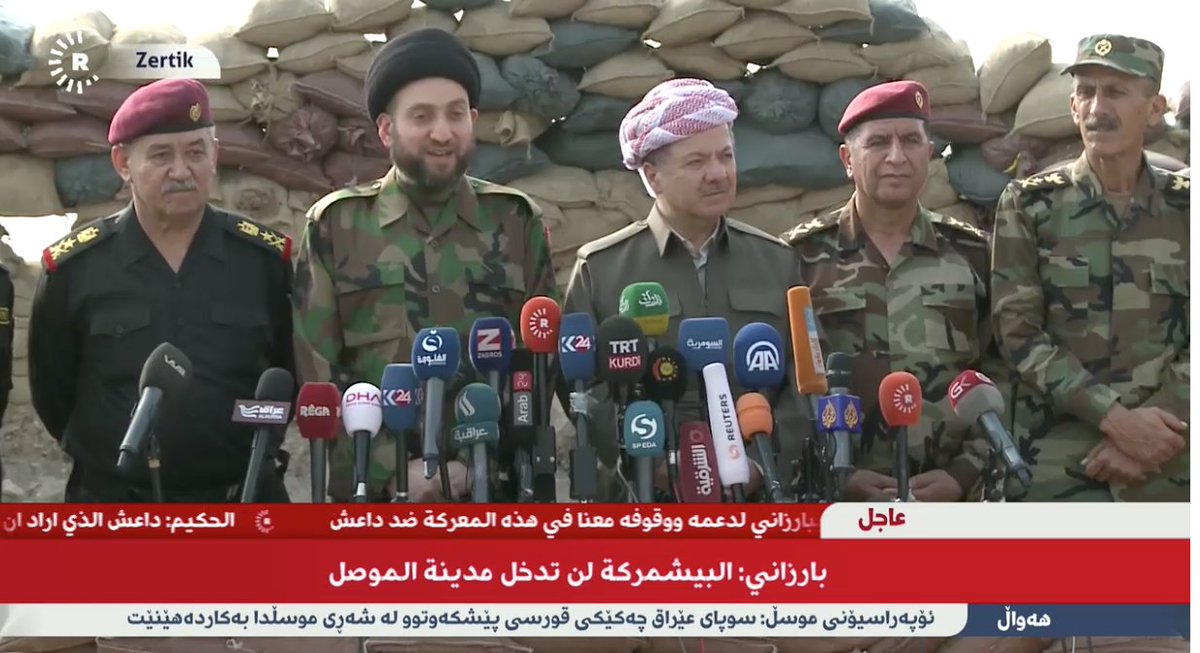 BAGHDAD (AP) – Anatolia: US general told AFP Thursday announced 800 to 900 of the organization of the Islamic State fighters have been killed since Iraqi forces began the support of the international coalition in the process of restoration of Mosul October 17.

Gen. Joseph Votal head of US Central Command, said in an interview with AFP from an undisclosed location “only in operations that took place during the week and a half last week to restore Mosul appreciate that they had killed probably 800 to 900 fighters from the organization of the Islamic state.”

For his part, the commander of the anti-terror apparatus revealed that the organization of the Islamic state, used for the first time, heavy weapons in the battle of Mosul (northern Iraq) was not used in earlier battles.

Maj. Gen. Fadhil Barwari, commander of the first gear in the fight against Allaghab device of Anatolia, said that “the organization of the Islamic state, used for the first time, heavy weapons fighting in Mosul has not used previously in Tikrit, Ramadi and Fallujah.”

He explained that “the fight against terrorism device seized during the Battle of hand Bartila, eastern Mosul, 155 guns and tanks were used by the organization in his fights, but he left it on the battlefield fled to Mosul.”

Berwari said, that “it was also found large tunnels stretching between the village and the other elements infiltrate the Islamic state, enabling them to flee.” He revealed that “the heavy weapons were hidden in the homes for fear of being targeted by coalition aircraft.”

And it launched the military campaign to regain Mosul at dawn Monday, the largest since the invasion of the “Islamic state” in the north and west of the country and control over one-third of the area of Iraq in the summer of 2014.

And given the military campaign aerial cover of the international coalition led by the United States of America.