Predicted the US Army, on Wednesday, “the complexities of the more difficult” during the battle to liberate the city of Mosul Center, (405 km north of Baghdad), confirmed that the organization (Daesh) “live his time wasted,” while he was confident “the ability of Iraqi forces to retrieve” Mosul from the control of the organization.

The commander of the US Central Unified Command for the Middle East and North Africa General Joseph Votal during his visit to Qayyarah, south of Mosul base, quoted by the TV station (NBC News US) and I followed (range Press), “The Qayyarah base now form a very important hub in supporting the liberation of Mosul operations “expected to” organize (Daesh) will resist and we will face more complications more difficult by our progress in the city and these obstacles are more roadside bombs or car bombs, there will be local residents and this Macesed complicate the fight more. “

He Votal, that “a long time on the elements of the organization (Daesh) as they prepare for this battle with all that Snquaomanm and Ndharham here very soon.”

For his part, the commander of the joint coalition forces in Iraq and Syria, Gen. Stephen Townsend said, “The Islamist al (Daesh) have published and use off a massive rockets and car bombs in their operations, the battle of Mosul,” and he, his confidence as “the ability of Iraqi forces to retrieve the city from the elements Organization”.

He said Townsend, “The organization (Daesh) lives and wasted his time now and accelerating time to run out and they would get Mosul, Iraqi forces during this period.”

The Prime Minister Haider al-Abadi, announced on Monday (17 October 2016), the start of liberalization city of Mosul process (405 km north of Baghdad) from the control of the organization (Daesh) terrorist, and stressed that the process is led by the army and federal police, he pointed out the failure of all attempts to prevent the process starting.

Then in what was dubbed the Commander in Chief of the Armed Forces Haider al-Abadi on Mosul operations Name (coming, Nineveh).

The organization (Daesh) took over the city of Mosul, Nineveh province, (405 km north of Baghdad), in (the tenth of June 2014), before extending his terrorist activities for many other areas of Iraq and is committed where “many violations” promised local and global points of “crimes against humanity and genocide.”

{Najaf: Euphrates News} met the cleric, Muqtada al-Sadr Ambassador of the European Union mission in Iraq by Patrick Samonet in his home province of Najaf.
A statement by the office of Mr. Sadr received by the agency {Euphrates News} acopy of it today that ” the two sides discussed activating the role of the EU in thehumanitarian, social and peace issues, as well as activate the issue of European aid to the people of Mosul and other areas where confrontations against the Takfiri groups and national reconciliation among the Iraqi people . ”
Mr. al- Sadr welcomed the statement said” the European role through the human side without military His Eminence emphasized on preserving the unity and sovereignty of Iraq and prevent foreign intervention , stressing not to allow any country to interfere the internal affairs of Iraq only after the approval of the people and the g
http://alforatnews.com/modules/news/article.php?storyid=130830

[Where – Baghdad]
The commander of the operations [coming Aaninoy, Maj . Gen. Abdul – Karim Shuli, on Wednesday, he said that ” the armed forces have achieved their objectives and rapidly over the first page of theprocess [coming, Nineveh.
Quoted the Ministry of Defence for Shuli in a statement received by all of Iraq [where] a copy of it today, ” The pieces of the armed forces were able to achieve its objectives and rapidly over the first page of the coming operation O Nineveh.”
In the same context , the Army Aviation team leader , said the first corner Pilot Hamid al – Maliki ,according to the statement , “it was assigning all the fighting axes a number of helicopters, which are chock full of pieces that are fighting in the land.”
for his part, the military adviser to the Ministry of defense , “Gen. team Mohammed al – Askari said during the ongoing themes of operations with the army Chief of Staff visits we made sure that theplans set is going according to the decree right context for it. ”
and the spokesman for the joint operations Brigadier General Yahya Abdullah Messenger that” after seven days on the coming launch of operations O Nineveh began clearing the pieces liberated villages and raise the remnants Daesh gangs and secure Hamdaniya district. ”
http://www.alliraqnews.com/modules/news/article.php?storyid=51456

[Oan- up]
Genel Energy said the company one of the largest oil producing companies in the Kurdistan region it received 12.20 million dollars in dues to the Government of the Territory for oil exports in August last year.
The company said that the partners in the field [Taq Taq] region received totaling $ 22.18 million inpayments from the Government of the Territory for oil sales.
The Genel Energy said earlier on Wednesday it expects the arrival of full – year revenues to aminimum of the target range due to weak production more than expected It is what led to the decline in its stock to its lowest level in seven months.
saw the Taq Taq field main -alhakl of the company , which exceed the reserves of 170 million Brmel- decline in total production in the third quarter to 58 thousand and 600 barrels per day compared with 68 thousand and 800 barrels per day in the first half of year with lower production from existing wells.
http://www.alliraqnews.com/modules/news/article.php?storyid=51460

{Nineveh: Euphrates News} escaped a large number of terrorist Daesh leaders, from the northern city of Mosul to the outside of the homeland.
The reporter said the National Alliance Media, on Wednesday, said that “a large number of terrorist Daesh leaders, Harbaugh of the city of Mosul outside the land of Iraq, after Adzo face the champions of our security forces, within the operations” are coming Aaninoy. ” It is
noteworthy that, the battle to liberate Mosul launched on 17 October of this, with the participation of security forces in various different forms and the Peshmerga and the popular crowd, participating forces have made significant progress edited dozens of villages and areas in the Altkdm.anthy axes
http://alforatnews.com/modules/news/article.php?storyid=130789

[Line-up]
decided by French President Francois Hollande, on Wednesday, extending the period of deployment of the giant aircraft carrier Charles de Gaulle to participate in operations against Daesh gangs in Iraq for two months.
He said the French president ‘s office said in a statement he was “briefed at the Defence and Security Council meeting , composed of senior ministers in his government and the leaders of the army and intelligence on the results of the military operations carried out by the international coalition forces against gangs Daesh in the Iraqi city of Mosul and future plans adopted.” And it includes the aircraft carrier Charles de Gaulle 24 bombers and fighter jets again.
The meeting reviewed as well as the fight against terrorism in France ‘s efforts and promote thespread of the security forces in various parts of France to reduce the threats of terrorist attacks.
France has been the target of terrorist attacks , several since Jan. 2015 , killing more than 230 people and injured hundreds.
http://www.alliraqnews.com/modules/news/article.php?storyid=51457 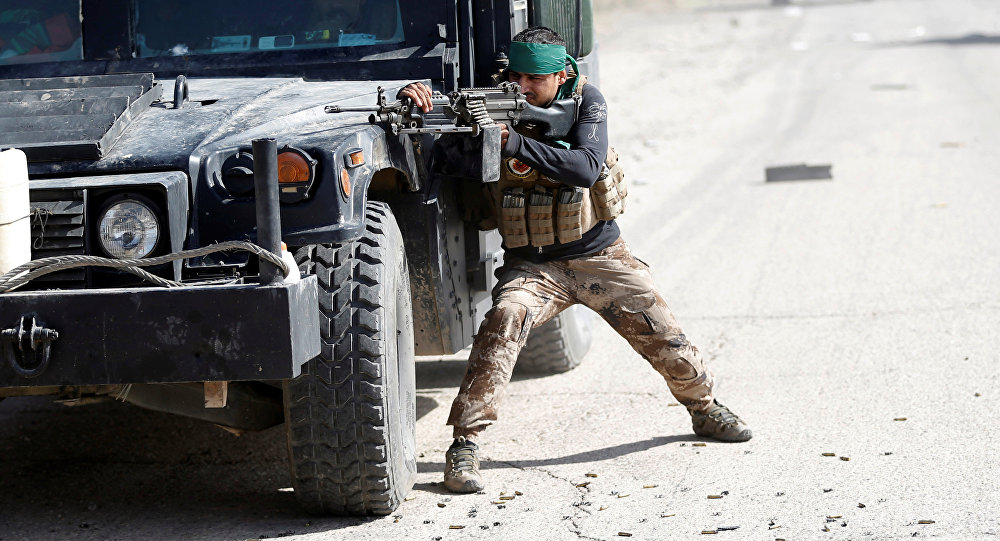 Sniper Mosul kills torturer while trying to slaughter a child ARAB WORLD 10/26/2016 10:44 (Updated 10:48 26/10/2016) Copy the link 0 564 2 0 It enables sniper gunman was killed in the Iraqi city of Mosul, before being able to kill the last of the teenager. The media reported that the “Sniper of Mosul” overthrew Barhabiy teenager killed as he tried to cut off his head. The militants fired organization “Daesh” fire on the sniper, but it had disappeared. There are many tales of “Sniper of Mosul.” It is referred to wander in Mosul in search of terrorists, and called them the fatal shots were fired in the ambush. He had been sending several terrorists.