[Oan- Baghdad]
denied the Joint Special Operations Command, announced by Washington on the tentative agreement between Iraq and Turkey to give Ankara the role and participation of the process of liberation of thecity of Mosul Daesh terrorist gangs.
A statement by the cell media Harbi received by all of Iraq [where] a copy of it, ” There is no truth towhat has announced reaching Iraq and Turkey agreement and the role of Turkey in the liberation ofMosul process.”
He added, “These operations are led by the Planning Iraqis and implementation against terrorism Daesh and free our people in Nineveh and in defense of the sovereignty of Iraq and his land. ”
the US defense secretary, Ashton Carter, announced earlier on Friday during his visit to Turkey that Ankara and Baghdad have reached a preliminary agreement on Turkey ‘s role in the battle of Mosul.
he supported the US defense secretary Turkey ‘s role in the fight against Daesh in Syria and Iraq. this
was the announcement during a visit by US Secretary of defense Ashton Carter, to Ankara, where he met with Turkish President Recep Tayyip Erdogan, the Prime Minister Ben Ali Yildirim, and defense Minister Fikri Aahak.
, said Ashton Carter, he told reporters on the plane that carried him to Turkey, said that respect for the sovereignty of Iraq “important principle” respected by all the other members of the alliance.
as a senior US official in the defense ministry said, requesting anonymity, said Washington hasasked the parties to the alleviation of their statements.
the official added: “We talked behind the scenes to push the Iraqis and Turks to reach an understanding on how to move forward on Mosul, the Turkish presence in Iraq. ” the
Iraqi government categorically rejects the participation of any foreign power ground operation, stationed Turkish troops and considered at camp district Ba’shiqah north of Mosul as” hostile “.
He visited Monday , an official delegation from Turkey to Baghdad to discuss the resolution of the crisis , but the Foreign Ministry, he said that the delegation “presented ideas have not lived up to the withdrawal of their forces from Iraq.”
http://www.alliraqnews.com/modules/news/article.php?storyid=51080

{Baghdad} Euphrates News Popular Mobilization Forces troops entered the province of Kirkuk, the center and the conduct of patrols to comb areas and revive the province.

According to media folk crowd in a statement the agency {Euphrates News} received a copy of it today that ” you told the crowd of Turkmenistan of the popular crowd, entered Kirkuk , the center of Siirt and foot patrols to comb neighborhoods areas in anticipation of any emergency.”
Saw the province of Kirkuk, today, terrorist attacks on a number of sites in theprovince, their molasses power station, which resulted in the fall of martyrs and wounded, prompting security forces to impose curfews
and the face of the commander in chief of the armed forces Prime Minister Haider al – Abadi evening to send extra troops to Kirkuk to its airport remnants Alarhab..anthy

The din of bullets, mortars and bombs in the northern Iraqi town of Bartella was replaced momentarily on Friday by a sound not heard there for more than two years: the peal of church bells.

A cautious calm returned to this historic Christian area following its recapture from Islamic State a day earlier as Iraqi forces push west towards Mosul, the jihadists’ last major stronghold in the country.

Bartella, once home to thousands of Assyrian Christians, emptied in August 2014 when Islamic State seized control as part of a lightning blitz across large swathes of Iraq and neighboring Syria.

Nearby Qaraqosh, Iraq’s largest Christian town, remains under the control of militants, according to a commander in the peshmerga, which holds nearby ground. Clouds of smoke were seen billowing from that direction this week, though the source was unclear.

Islamic State, which has targeted the adherents and religious sites of minority communities in both countries, issued an ultimatum to Christians: pay a tax, convert to Islam, or die by the sword. Most, including all of Bartella’s residents, fled towards the autonomous Kurdish region.

It will be some time before people can return to the town, which witnessed intense fighting on Thursday between Islamic State and troops from the counter-terrorism service (CTS) which are spearheading the Mosul offensive along with Kurdish peshmerga forces and Iraq’s army and national police.

The road west into Bartella is littered with the remnants of that battle: bullet casings, deactivated improvised explosive devices (IEDs), shrapnel from car bombs and roadside blasts.

The jihadists dispatched more than a dozen vehicle-borne IEDs against government forces in the span of a few hours on Thursday, Iraqi commanders said, but they left many more planted throughout the town’s streets and buildings.

CTS spent Friday shuttering tunnels dug by the militants and removing those mines, though some remain in secondary roads and houses.

“Bartella is now safe and secured. It is under our complete control,” said the battle’s commander Major General Maan Saadi, an Iraqi tricolor draped around his shoulders.

He told reporters during a brief visit to Saint Matthew’s Syriac Orthodox Church that Islamic State fighters, who pinned down CTS forces earlier in the day with sniper fire, had been completely eliminated.

More than 80 jihadists had been killed in the battle, he added, with a few likely fleeing deeper into IS-held territory. 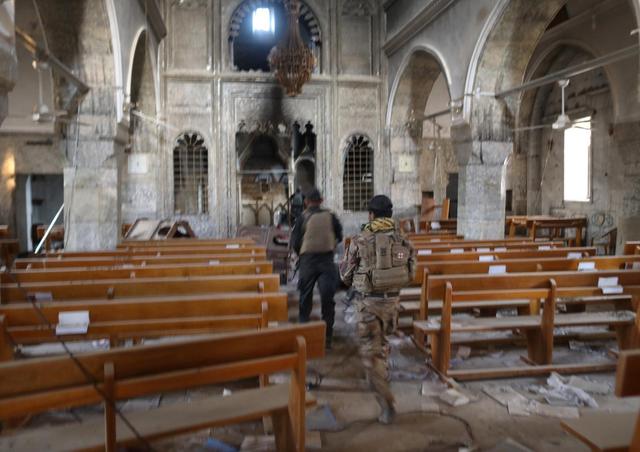 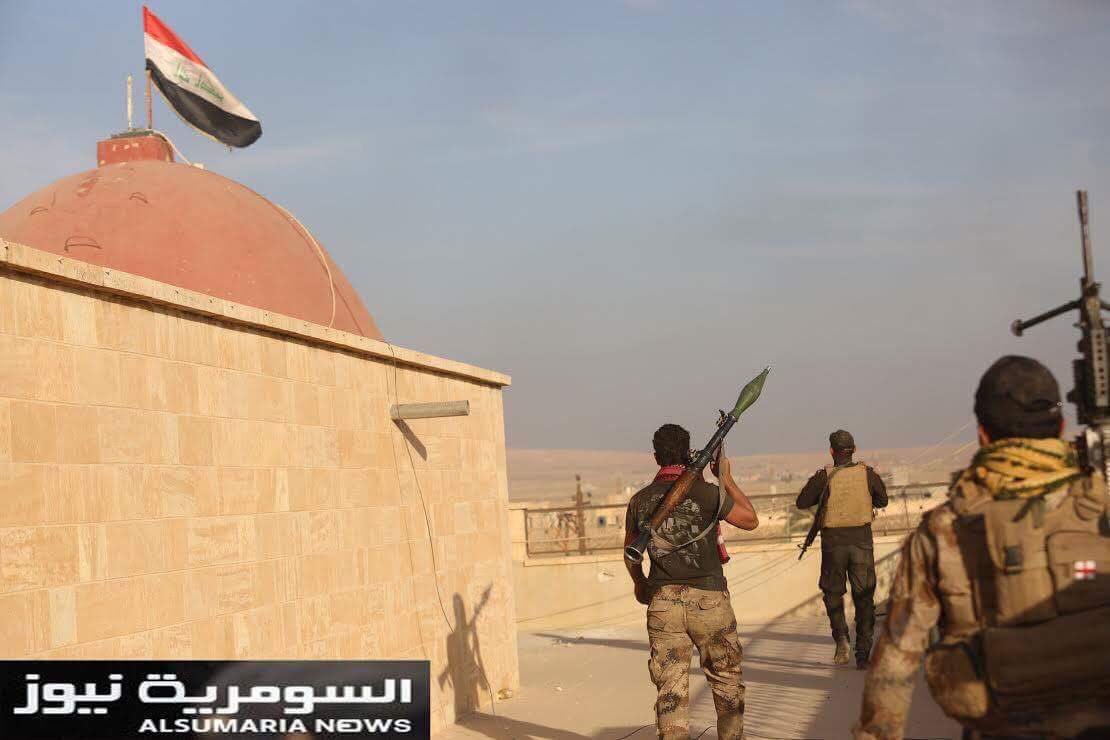 [Oan- Baghdad]
official statistics, enhanced the ROI size of the losses to a number of terrorists gangs Daesh since the start ofliberalization city of Mosul operations in the five – day – announced.
And it began freeing the city of Mosul operations at dawn Monday, engaged in battle army troops, and counterterrorism and federal police, and the Peshmerga, the PDF and tribal crowd, flight international coalition. The
combined forces achieved several victories and liberated several villages.
According to a statement to the cell media Harbi received by all Iraq [where] a copy of it, that ” the overall losses of the enemy on 10/17/2016 until 10/21/2016, was, to kill [473] Arhabiyt and arresting 22 others, and destroying [95] wheel bomb, destroy [ 21] detachment mortar, and the destruction of [16] glutamate, and the destruction of [7] explosive belts, and the destruction of a large store of weapons, and blow [4] houses bomb, destroying [11] added. ”
He pointed to” blow [352] an explosive device under control, and the bombing [5] motorcycle, and destroy [3] tunnels, and the seizure of 1.5 tons of ammonium nitrate, and the seizure of 120 – mm mortar number of rounds [9] and [380] mortar, grab the [61] Katyusha rocket. ”
as reported Statistical “seize [31] missile base, grab a PKC machine gun, and destroy [4] defender and grab guns and one caravan, and find [4] machine-gun, and the destruction of Rchastein Ahadetyn.”
http://www.alliraqnews.com/modules/news/article.php?storyid=51078

, According to medical and security sources in Kirkuk, said Friday that 155 people had been killed and wounded in Kirkuk attacks launched by elements of al (Daesh), which is still going on even now. “

The sources said in an interview with (long-Presse), “The outcome of suicide attacks and clashes are still going so far in some areas of Kirkuk between security forces and elements of the organization (Daesh), it stood at 35 dead and 120 wounded,” likely “to enter about 40 component of the organization Daesh to Kirkuk to carry out terrorist operations inside. “

The sources added that “the wounded were taken to hospitals in the city were transferred the dead bodies to the forensic medicine department in preparation for Tzlmehm to their families.”

A security source in Kirkuk province said on Friday (21 October 2016), that the organization (Daesh) attacked a number of the city of Kirkuk areas (250 km north of Baghdad), and also confirmed the deaths of five members of the organization, pointed out that the security forces imposed curfew.

The management spend molasses in Kirkuk confirmed on Friday (21 October 2016) .16 technically killed and factor offensive to organize (Daesh) on the power station, northwest of Kirkuk (250 km north of Baghdad), as pointed out that the dead included four Iranians.

The unit of the security tensions in Kirkuk rose, after the control of the elements of the organization (Daesh) on areas of Hawija and the areas of Riyadh and Abbasi and Zab, after the capture of Mosul, Nineveh province, (405 km north of Baghdad), in (the tenth of June 2014) , and repeated attacks by the organization on the outskirts of the city in order to storm it.

Twilight News / denied the Kurdistan Democratic Party bloc in the Iraqi parliament on Friday to provide the names of candidates for the post of finance minister instead Hoshyar Zebari, who pulled him to the confidence of Parliament a few weeks ago.

The deputy head of the block Tariq friend Rashid in a press statement responded to the Twilight News, “I deliberated some websites and channels and media news story attributed to us that that the parliamentary Ktltna will progress in the next week three candidates, the Ministry of Finance as substitutes for Mr. Minister Hoshyar Zebari as an election event to the size of the parliamentary Ktltna” .

He explained that “the Kurdistan Democratic Party did not nominate any alternative to the Minister of Finance, especially since there is a lawsuit instituted by the Minister of Finance to the Federal Court to determine the constitutionality and legality of withdrawal of confidence measures, and set a date the court at the beginning of next month to make a decision on the appeal.”

Rashid pointed out that “through our follow-up to the source of the news show that he fabricated smear on the one hand and used the title is the aim of our address postal confusion and confusion and we will pursue a judicial body that has planted Woods news on our behalf.”

BAGHDAD / National Center Brief / NNC- will discuss next Sunday with the leadership of the Badr bloc Interior Ministry source candidate in the Council of Ministers, Prime Minister Haider al-Abadi said.

The source of the Center for National Bri / NNC / that “Abadi shortened candidates Bader Interior Ministry, namely Abdul Karim Ansari and Qasim al-Araji, and gave up the other names that have been nominated.”

The source added that “al-Abadi has notes on the candidates of Badr to the Ministry of the Interior is seeking to discuss with the leaders of the Badr on Sunday, particularly with regard fearfully from the control of Badr some important institutions in the Interior Ministry.”

[Oan- up]
US Secretary of Defense Ashton Carter revealed on Friday after talks with Turkish President Tayyip Erdogan said Turkey and Iraq reached an agreement in principle will be allowed in the end Turkish role in the restoration of thecity of Mosul from Daesh campaign.
Carter told reporters at the conclusion of his trip to Ankara today, “I think it was to reach an agreement in principle and now we are working on the details, and this is what we are working to apply it” follows ..
http://www.alliraqnews.com/modules/news/article.php?storyid=51067