The United States denied the US on Monday, its support division of parts of Iraq, while showed that it supports “a united Iraq and a democratic, prosperous and sovereignnation, ” according to its constitution.

This came in a clarification of the US ambassador in Baghdad, Douglas Silliman, on the embassy’s website in the social networking site Facebook.

Silliman said, “The reports hinted that the United States supports the divided parts of Iraq, are completely untrue.”

The ambassador, “Let me be clear, that the United States supports a much more unified, democratic, prosperous and sovereign nation that meets the aspirations of all Iraqis, according to the Constitution of Iraq,” noting that “Iraqis will take their own decisions on the structure of their government.”

The new Silliman, “the United States’ commitment to help Iraq defeat Bdaash, and help the Iraqi people rebuild their communities and their return to their homes.”

According to a spokesman for the Kurdistan Regional Government, Sven Dzia, on Monday, that the President of the Kurdistan region , Massoud Barzani, visited the Iraqi capital, Baghdad, to meet with al – Abadi and with officials in the federal government, to discuss a number of matters of common concern.

Dzia said, in a statement to the media network Roudao, “The President of the Kurdistan region, Massoud Barzani, will visit Baghdad to meet with Iraqi Prime Minister Haider al-Abadi.”

He added that “shortly before there was a telephone call between Barzani and al-Abadi, was addressed to the upcoming visit to Baghdad.”

The spokesman for the Kurdistan Regional Government, that “the two sides will discuss a number of matters of mutual interest, as well as the battle of Mosul.” 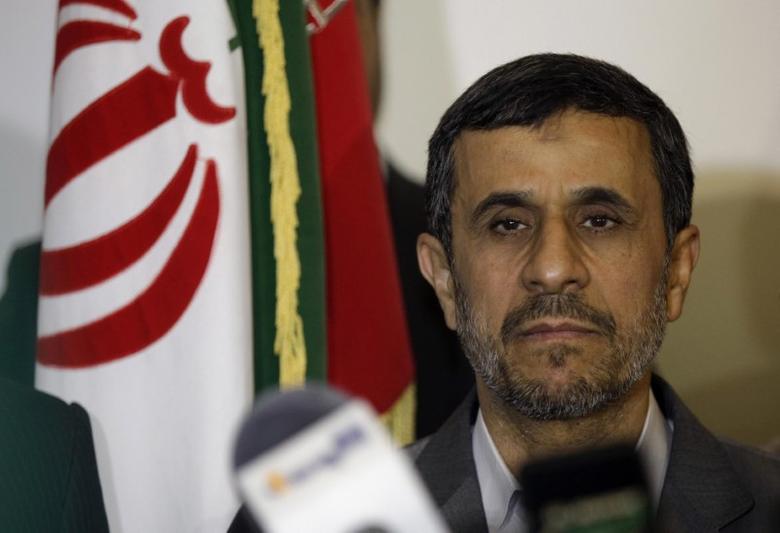 Ahmadinejad had not announced any plans to run in the vote scheduled for May, but has made several speeches in recent months, prompting speculation of a political comeback.

Commentators had suggested the firebrand populist, who frequently enraged the West with his rhetoric during his eight years in office, would have given Iran’s conservatives their best chance of regaining power.

But the instruction by supreme leader Ayatollah Ali Khamenei, reported by state news agency IRNA, effectively destroys his chances of getting the wider backing he would need to run a successful campaign.

“He (Ahmadinejad) came to me and I told him not to stand as I think it is not in his interest and that of the country,” Khamenei was quoted as saying.

“It will create bipolar opposites and divisions in the country which I believe is harmful,” Khamenei added.

Rouhani’s popularity surged after last year’s deal with world powers that lifted most sanctions on Iran in exchange for curbs on its nuclear program.

Another potential rival – Revolutionary Guard Commander Qassem Soleimani, the most high-profile face in the fight against Islamic State in Iraq and Syria – said this month he would not stand in the vote.

Ahmadinejad was first elected president in 2005. His disputed win in the 2009 election prompted the Islamic Republic’s biggest protests and a security crackdown in which several people were killed and hundreds were arrested.

Iranian law bars a president from seeking a third consecutive term. But Ahmadinejad would have been able to run again after the gap caused by Rouhani’s term.

Twilight News / Media sources said Kurdish, on Monday, for a planned visit to the Kurdistan Region President Massoud Barzani to Baghdad to discuss a number of issues with the federal government.

And the transfer site “Harpras” Kurdish information from a source in the Democratic Party of Kurdistan’s political bureau reports that due to the region’s president, Massoud Barzani’s visit to Baghdad next month.

He added that the site visit is to discuss the issue of relations between the province and Baghdad, and the crises that marred.

And it follows that Barzani will discuss officials in Baghdad’s future and the fate of Mosul after its liberation from the control of terrorists “Daesh.”

He noted that the visit by Barzani to Baghdad comes at the invitation of President of the Federal Government Haider al-Abadi.

The region’s president, Massoud Barzani, has not visited Baghdad for more than five years.

They discussed the crisis cell headed by Prime Minister Haider al – Abadi, the final version of the draft financial budget and ensure the armed forces ‘ requirements.

Information Office of the Prime Minister, said in a statement, “Prime Minister Haider al – Abadi chaired a meeting of the crisis cell in the presence of a number of financial and economic advisers.”

The statement added that, “During the meeting , discuss the finalization of the draft financial budget and a review of its provisions , including working to reduce consumer spending to ensure salaries and pensions and to secure the armed forces requirements and increase the production of electricity, as was discussed to increase non – oil revenues by relying on suitable for this purpose measures.” according to the statement.

The statement stressed, ” the importance of raising the efficiency of the performance of all state institutions in the light of the challenges taking place in the country and provide the required services to citizens where requires more work and procedures that put the country on the right track.”

[Oan- Baghdad]
Search President of the Kurdistan region, Massoud Barzani, in his office on Monday, with the head of the National Coalition , Iyad Allawi , political developments in Iraq and the region.
A statement by the presidency of the province that ” the two sides discussed the battle against terrorism, and thebattle of Mosul, as well as post – edit Mosul Daesh.”
He pointed out that ” the two sides discussed the latest political developments in Iraq, and the political project in the Kurdistan region.”
The statement noted ” attend the meeting each of the member of the political Bureau of the Kurdistan Democratic Party, Rose Nuri Shaways, and Hoshyar Zebari, the President of the Presidium of the Kurdistan region, Fouad Hussein. “
http://www.alliraqnews.com/modules/news/article.php?storyid=49160

[Oan- Baghdad]
Search President of Kurdistan , Massoud Barzani on Monday with the private secretary general of the United Nations envoy in Iraq , Jan Kubis ongoing preparations to begin the process of freeing the city of Mosul Daesh terrorist gangs.
A statement by the presidency of the province that Barzani touched with the UN official to a number of issues andpolitical issues in Iraq and the region, particularly the post – eradication of Daesh. ”
The statement added, the UN envoy briefed Barzani during the meeting” at the ongoing United Nations on the war against terrorism in the talks Syria and Iraq, especially the participation of the recent Iraqi delegation at meetings of the United Nations General Assembly in New York. ”
He expressed the UN envoy Jan Kubis according to the statement from the ” keenness of the international organization to take into account all the observations and proposals submitted by a broad spectrum of Iraqi factions, especially Kurds , of which about post Daesh. He
also expressed the UN envoy expressed satisfaction with the coordination and cooperation between Barzani and Prime Minister Haider al – Abadi about ways to counter terrorism and the war on Daesh.
the Christan province , officials are looking to the existence of “precise and clear agreement” on a post – Daesh in Mosul ensures the involvement of all the province of components Nineveh in building a new life to avoid any reprisals and qualifying ethnic or religious or sectarian.
the Abadi had discussed recently in new York with US President Barack Obama ‘s ongoing battle to liberate Mosul Daesh who controlled since June 2014 and increased international assistance for displaced Iraqis and reconstruction preparations their regions in addition to support for economic and political stability in Iraq.
http://www.alliraqnews.com/modules/news/article.php?storyid=49159

Twilight News / oil jumped nearly four percent on Monday, with top producers meeting in Algeria to discuss ways to support prices while volatility increased to their highest level since a similar meeting to install a production hosted by Doha in April, but my failure.

Organization of Petroleum Exporting Countries and the complexity and other exporters in the forefront of Russia’s largest producer in the world held an informal meeting on the sidelines of the International Energy Forum in Algeria from 26 to 28 September to discuss steps to address the supply glut of crude, which affect prices.

And reduced Iran, a senior member of OPEC and the fourth-largest crude exporter, the chances of concluding an agreement while holding other members of the Organization of hope. Iran is working to return to production levels before the imposition of international sanctions on it in 2012.

Twilight News / announced a senior US diplomat Zalmay Khalilzad, on Monday, that his country will play an important role in the independence of Kurdistan, pointing out that the agreement with the province of Baghdad in this regard will facilitate the recognition of the state is Kurdish.

According to Khalilzad’s remarks, who served between 2005 and 2007 the position of the US ambassador in Iraq, during a conference held in Washington.

He said that the Kurdish parties to put aside their differences and think of reconciliation Kurdistan, stressing that it is not permissible that the Kurds submit their future victim to disagreements between the parties.

He added that the future of Kurdistan is greater than from any local problem, stressing that the province continue its contacts and meetings with Iraqi parties on independence from Iraq.

Also pointed out that the United States will play an important role in the issue of the independence of Kurdistan and in meetings between the federal government and the leaders of the Kurdistan Region.

According to a statement issued by the Ministry of Oil, he was greeted Allaibi Algerian Energy Minister Noureddine Bouterfa Iraqi Ambassador Abdulrahman al-Husseini.

The statement added that the two ministers held a friendly encounter conveyed the greetings of the Government and people of Iraq Algerian counterpart, which has been praising the depth of relations between the two countries.

The statement continued that during the meeting to strengthen cooperation and relations in the field of oil and gas between the two countries and open new horizons.

According to the statement, the minister face of the Iraqi delegation of the two companies of Iraqi Marketing SOMO and the oil south to hold a meeting with Sauna company Tarak Sonatrach of Algeria, noting that during the meeting, an agreement to develop a new basis for the promotion of mutual cooperation between the field of oil, gas and other fields.