[Oan- Baghdad]
Parliament Speaker Salim al – Jubouri rejected accusations of the Minister of Finance [art] Hoshyar Zebari, the illegality of his interrogation and the withdrawal of confidence with him in addition to his accusations [of Jabouri] not professional management session.
According to a statement issued by the Information Office of the Jabouri received by all of Iraq [where] a copy ofit, that ” the Minister of Finance article made during the past two days , a set of statements that carried thefallacies several must clarify public opinion , ” noting that “questioning executives by the House process is aconstitutional right under Article 61 can not be in any way that obscures this right – or – miss. ”
He pointed out that” the questioning of the Minister of Finance has completed all conditions of formal and legal and that the House of representatives voted according to their convictions free withdrawal of confidence in him as representatives of the people and can minister to resort to the Federal Court to provide his appeals he deems according to the contexts used in this regard, is not entitled to his accusations directed to the legislature and thepresidency without legal basis. ”
the statement continued that” the House of Representatives pasts in the performance of his duties regulatory mandated by the people and the right of MPs to question the officials acquired right can not be any party that rob them of him. ”
the House of Representatives voted in its meeting last Wednesday, the withdrawal of confidence from Zebari , theapproval of 158 deputies against the rejection of 77 deputy reservation 14 deputies.
the head of parliament Saleem al – Jubouri, was” based on the House vote, the finance minister seen as an article of office , “noting that” the minister questioned filed a lawsuit in federal court on the presidency of the Council ofRepresentatives on this issue , “adding that” parliament will present a list of response to the list provided in thelawsuit also said the House will approach the court to clarify the constitutionality of any decision taken by theCouncil inconsistent with a vote of confidence. ”
stabbed Zebari, on the legality of the withdrawal of confidence with him , ” adding that ” the law states that thediscussion of interrogation is after a period of not less than seven days , but that it did not take into account where no separating the sessions only one day . ‘”
He added Zebari press conference in Arbil Thursday, that ” the parliament session , which was held at 27-8 was illegal and administration , Salim al [parliament speaker] of the session were not a professional, and that thequestions were directed in bad faith , ” he said.
as Zebari accused the head of a coalition of state law, Nuri al – Maliki, of being behind the dismissal of cabinet ministers intent to thwart the current government headed by Haider al – Abadi, “describing al – Maliki” the enemy of the region of Kurdistan. ” In the recipe.
http://www.alliraqnews.com/modules/news/article.php?storyid=48938
Advertisement

Twilight News / instructed Iraqi Oil Minister Jabbar Allaibi on Friday to deliver oil products to spend Sharqat, a day after the restore of the organization Daesh.

The Oil Ministry said in a statement responded to the Twilight News, The Allaibi instructed to petroleum products distribution company and gas filling Btser convoys of emergency aid immediately to the citizens spend Sharqat liberated and the displaced families from them.

The minister stressed the need to expedite the delivery of petroleum products to them and working to meet all the needs of the citizens of White liquid and gas oil, gasoline and gas oil.

The Iraqi forces had recaptured the district center yesterday to organize Daesh, which was the last stronghold of the militant group in Salahuddin province.

[Oan- Baghdad]
the House of Representatives celebrated, on Saturday, the International Day of Democracy, in the presence of the three presidencies.
According to a statement of the Department of Media of the Parliament: sponsored by House Speaker Salim al -Jubouri , held on Saturday in celebration of the International Day of Democracy and the presence of his two deputies, and the president of the republic [Fuad Masum, and Prime Minister [Haider al – Abadi, and members of the Committee on Foreign parliamentary relations, and the representative of the Secretary General of the United Nations in Iraq [Jan Kubis]. ”
the statement pointed out,” the celebration will be held at ten o’clock in the morning in the Great Hall of the Parliament. “
http://www.alliraqnews.com/modules/news/article.php?storyid=48935

Shafaq News / The head of the government Haider al-Abadi said all the world leaders with whom he met at the United Nations General Assembly in New York showed their willingness to support Iraq in all fields.

Ebadi said in a televised speech after returning to Baghdad, “We had thirty meetings with the world leaders who hailed Iraq’s ability to fight terrorism and eliminate Daesh, and concentrated these meetings about the continuation of international support in the war against Daesh and continued reinforcement and logistical support for the Iraqi armed forces.”
Abadi said that “the international community should consider with respect to Iraq, the big experience in the fight against terrorism, adding that he” discussed with the leaders with whom he met, re-displaced people and the effects of the oil price collapse file. “

[Oan- Baghdad]
Prime Minister Haider al – Abadi returned to Baghdad after the conclusion of his visit to New York.
And co – Abadi on his visit to New York , where he arrived at dawn on Monday to attend the meeting of the General Assembly of the United Nations and delivered yesterday the word Iraq in. He
also met with al – Abadi on the sidelines of the meeting of many heads of state attending , most notably US President Barack Obama and Vice President Joe Biden and UN Secretary General Ban Ki – moon and other officials and discussed with them the situation in Iraq and the preparations for the battle to liberate Mosul , aswell as ways to support the displaced people and the financial crisis and the obligations of the international community towards the country.
http://www.alliraqnews.com/modules/news/article.php?storyid=48926

Baghdad
Information Office of the Prime Minister Haider al-Abadi, announced Friday, on the latter’s return to Baghdad after the conclusion of his visit to the US New York City to attend the meetings of the General Assembly of the United Nations.
Ebadi said the Office said in a brief statement received Alsumaria News, a copy of it, that “the Prime Minister Haider al-Abadi returned home after concluding his visit to New York.”
And was launched in New York on Tuesday (20 September 2016), the work of the 71st session of the General Assembly of the United Nations with the participation of delegations from 193 countries are members of the international organization, including Iraq.
And threw Abadi, on Thursday, a word during the meeting, which called for the international community to demand Turkey to withdraw its troops from northern Iraq, and stressed that the presence of those forces hinder liberalization of Mosul control “Daesh.”
Abadi also called in his speech to the serious cooperation to dry up the sources of the “Daesh”, warning of the proliferation threat in all countries of the world, while stressing the need to confront “extremist ideology” on which to base the organization in the implementation of its attacks.
https://translate.googleusercontent.com/translate_c?depth=1&hl=en&prev=search&rurl=translate.google.com&sl=ar&u=http://www.faceiraq.net/inews.php%3Fid%3D5101766&usg=ALkJrhgxrGdf5WFL2zLo1c4v13d450ajeA

BAGHDAD (AP) — Iraq’s Oil Minister said his country supports any deal to prop up oil prices in the international market ahead of next week’s meeting of oil producers in Algeria, adding that fluctuating prices have badly affected the producers.

Members of the Organization of the Petroleum Exporting Countries and non-OPEC producers are scheduled to meet Sept. 28 in Algeria in a bid to reach a deal to boost prices by limiting oil production. In April, oil producers met in Qatar to discuss the proposal but failed to agree on a cap after Iran, which wants to boost exports after years of sanctions, refused to join in.

In a statement issued late Thursday, Minister Jabar al-Luaibi set a production ceiling of between 4.75 and 5 million barrels per day. Al-Luaibi said Iraq’s “fixed policy is to maintain Iraq’s share” in the global oil market.

“Iraq’s oil policy aims at cooperating with the producers inside and outside OPEC to achieve the needed balance in supply and demand and the stability in the market,” he added.

Crude oil is now traded at around $46 a barrel, down from more than $100 in mid-2014. Low oil prices have wreaked havoc on Iraq’s national budget, of which oil revenue makes up nearly 95 percent, pitching the country into a severe financial crisis as it struggles to combat the Islamic State group.

Iraq is also grappling with a major humanitarian crisis. The U.N. estimates that more than 3 million people have been forced from their homes since IS swept across northern and western Iraq in 2014, capturing the country’s second largest city, Mosul.

The Iraqi government is now gearing up for a major offensive to retake Mosul, pledging to recapture the city this year. 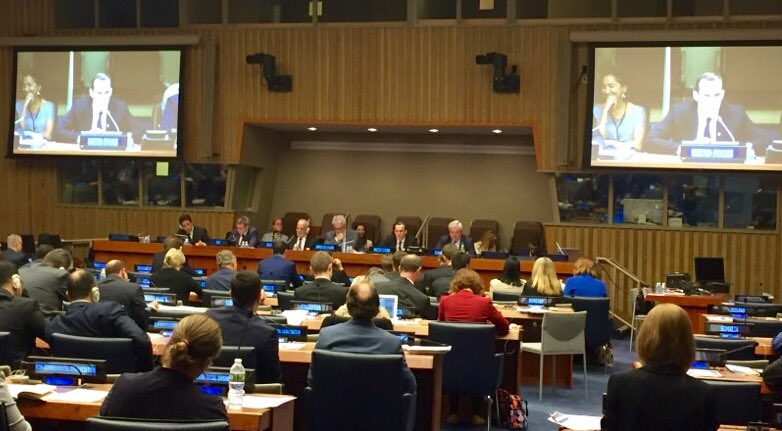 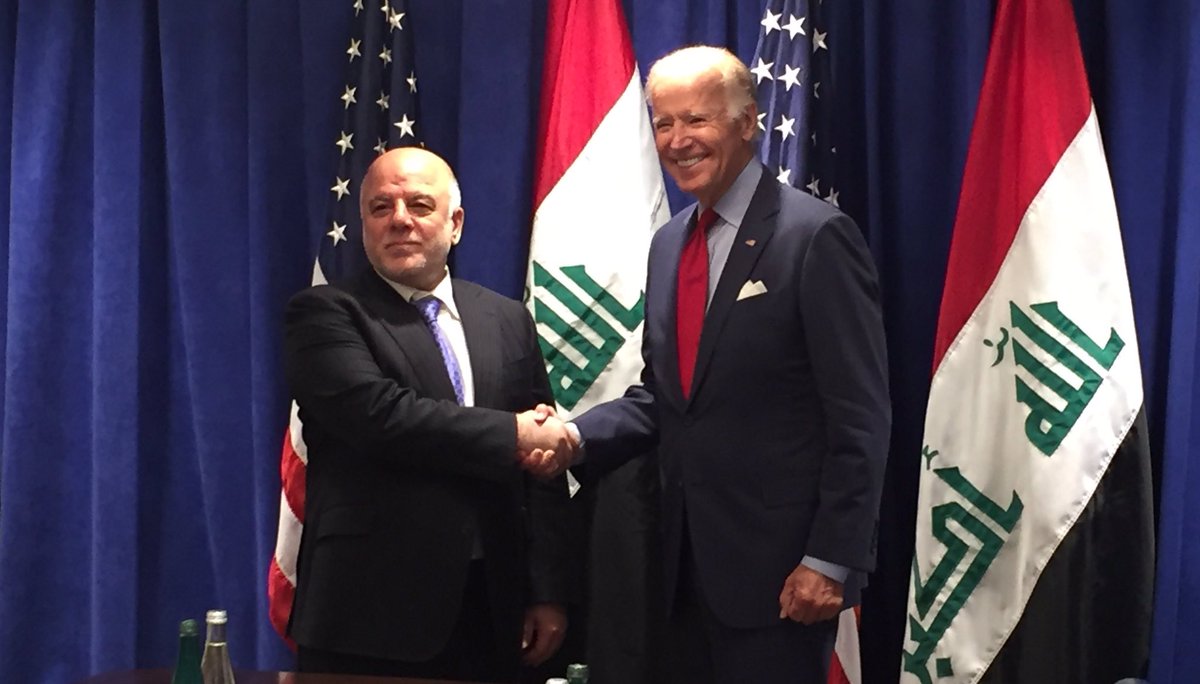