{Baghdad} Euphrates News said prime minister Haider al-Abadi, and the House of Representatives Saleem al-Jubouri, the need to put aside their differences to walk in the country on the right track.
A statement by the Prime Minister ‘s Office, the agency {Euphrates News} received a copy of it, that Abadi “received in his office on Sunday, Parliament Speaker Salim al – Jubouri, During the meeting , the blessing of the great victories achieved by our heroine in Khalidiya and Qayyarah and the importance of unifying the floor and rows to sustain the momentum of victories the liberation of the entire territory. ”

He added , ” they also discussed preparations for the Liberation of Mosul and the emphasis on the humanitarian situation and the displaced people and provide essential necessities of life to them , “he said , adding that” the meeting touched on the relationship between the executive and legislative branches and the importance of laws that serve the citizens and contribute to upgrading the performance of institutional country ‘s legislation. ”

the statement pointed to “discuss the major challenges faced by the country that require everyone to assume his responsibility to overcome them, where there are active steps going by the government for transit and need more work and put aside their differences for the progress of the country on the right track.”

He continued , “it was also stressed to continue along the path of reforms and the fight against corruption “.anthy

The head of the Islamic Supreme Council of Iraq, Ammar al – Hakim, the head of the House of Representatives Saleem al – Jubouri, the need for political calm in the parliament.

Hakim said , according to a statement his office received by all of Iraq [where] a copy of it, “through receiving Parliament Speaker Salim al – Jubouri , and a number of leaders of the labor union, we emphasized the importance of political appeasement , which starts from the dome of the parliament to go, the battle to liberate Mosul.” He

also stressed the wise during the meeting , according to the statement ” the importance of the House of Representatives to stand up in turn the regulatory and legislative, and let us to apply the rules of parliamentary behavior, consider the demand for electoral collect two practices in one day, and reducing the number of members of the House of Representatives and members of the provincial councils.” 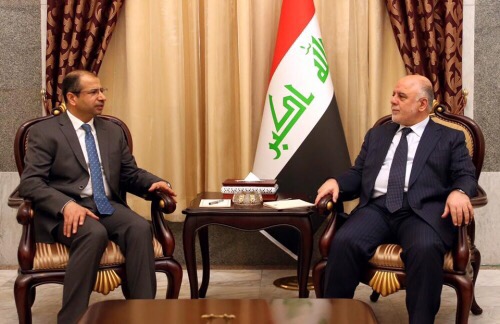 Search Prime Minister Haider al – Abadi, in his office on Sunday, with House Speaker Salim al – Jubouri , the relationship between the government and parliament under way to liberate the city of Mosul and preparations.

A statement by the prime minister ‘s office received by all of Iraq [where] a copy of it, that “During the meeting , the blessing of the great victories achieved by our heroine in Khalidiya and Qayyarah and the importance of unifying the floor and rows to sustain the momentum of victories full liberalization territory.”

He added , ” They also discussed preparations for the Liberation of Mosul the emphasis on the humanitarian situation and the displaced people and provide essential necessities of life for them. ”

Turning the meeting according to the statement, to” the relationship between the executive and legislative branches and the importance of laws that serve the citizens and contribute to upgrading the performance of institutional country ‘s legislation. ”

discussed Abadi al – Jubouri , the ” big challenges faced by the country , which requires everyone must shoulder its responsibility to overcome where there are active steps by the government is going to transit and need more work and put aside their differences for the progress of the country on the right track. ” the

two sides stressed” to continue along the path of reforms and the fight against corruption. ”

(IraqiNews.com) Baghdad – Secretary General of Badr Organization, Hadi al-Ameri announced on Sunday that over 1200 ISIS militants, including women, were killed during the liberation operations of Khalidiya Island.

Al-Ameri, in an official statement received by Iraqi News, said, “Over 1200 ISIS fighters, which also included women cadets, were killed in the Kahlidiya Island liberation operations. The operation was an answer to the Karrada killing.”

“Al-Hashed al-Sha’bi forces arrested a number of ISIS members and during interrogation, these captive members have revealed a lot of information about the senior members of the militant outfit; which also includes the fugitives from Abu Ghraib prison,” Ameri added.

“Some of the arrested foreign commanders were women and were dressed in military uniforms. They also fought against the security and Al-Hashed al-Sha’bi forces,” added Ameri.

Revealed the Kurdistan Alliance member Zana happy, Sunday, proximity to withdraw confidence from Finance Minister Hoshyar Zebari after not convinced Parliament Bojobth, and as pointed out that his answers did not convince the Kurds by Arabs, stressed the need for the minister to be the alternative Kurds to maintain balances.

Said, “The Kurdistan Democratic Party is the only objector on the grill and Finance Minister Hoshyar Zebari, a vote of no conviction of the answers given by the Minister of Finance,” pointing out that “the rest of the Kurdish blocs voted for the lack of conviction with answers Zebari that the answer if not convincing to the Kurds by Arabs.” .

He added that “the withdrawal of confidence from Zebari has become almost settled only if there are political agreements or compromises between the blocs,” stressing that “the minister is a variant of the Kurdish component, regardless of the party or bloc with the balance being and we are not with the quota system.”

Announced Iraq ‘s national security adviser and chief of thepopular crowd, Faleh al – Fayad, the existence of anagreement with the President of the Kurdistan region, Massoud Barzani, on the restoration of Mosul process.

Information Office of the Fayyad said in a statement, he told a group of reporters in the Kadhimiya district of Baghdad, “We have agreed with Mr. Massoud Barzani not to enter the Peshmerga forces to Mosul city center, ie to remain on the outskirts of the city and enter the Iraqi army and local police and the crowd popular to Mosul.”

Saw experts that this class is very close to the economic reality of Iraq under the circumstances witnessed by the decline in oil prices and the war on «Daesh» terrorist. The Economic academic Dr. Majid Baidhani the view of the experts commented that this degree of classification longer acceptable and good compared to what passes by Iraq , as well as it was the first grade credit rating obtained by Iraq in the economic history since September of last year, indicating that this class could be upgraded when the stability of the general situation in Iraq and reach out at grade A or even + A with outlook positive and stable . Reuters reported , citing the company said the outlook stable include expectations that a large budget deficit and balance of foreign transactions will be possible to finance, and also contain the conflict with al «Daesh». predicted the S & P that the real GDP growth of Iraq will fall to less than 2 levels percent in 2017-2019 due to the negative effects of the consolidation of fiscal policies and local demand is weak. the Agency was granted Iraq ‘s first grade credit rating in its history , beginning in September of 2015 after completing the procedures for obtaining the classification for being did not have the degree of credit rating because of the wrong wars absurd economic policies that have fought dictatorial regime against some neighboring countries.  the Standard & Poor ‘s (S & P) is a financial services company based in the United States.

Khandan – A senior political source in the National Alliance that secret negotiations conducted by the United Nations with the leaders of the main political blocs to end the dispute regarding the accountability and justice law inpreparation for submission to parliament for a vote.  The source , who asked not to be named, told the newspaper (life) that ” talks conducted under the auspices of theUnited Nations office in Baghdad to end the dispute in some paragraphs of the accountability Act , which faces strong opposition from a coalition of state law and the Sadrists and the virtue Party and the Badr Organization, who consider that the law allows for the figures in theBaath Party ‘s political participation. ” the source pointed out that” National Alliance seeks to ensure that the non -participation of Baathists, but a coalition of Iraqi forces calls for transforming the ablation profile to justice instead of having a partisan institution oversees the work of theablation may target certain parties to blackmail before each election held in the country. ”  the source added that” coalition forces bent on non – return of the Baathists, even those who have not stained their hands the blood of Iraqis or did not commit inhuman crimes, to the political arena and assume positions in the government, with powers Union believes that the return offered the greatest opportunity to achieve national reconciliation in thecountry. ” for his part , said a member of the legal committee in parliament Salim Shawki told the newspaper that “disagreements exist in the draft law concerning theinclusion of Baathists retirement or their term ofgovernment positions , ” stressing that ” thepostponement of the ongoing vote on justice and accountability Act is due to hold the National Alliance and the Union of forces their positions regarding the granting of concessions to Baathists who have not committed acrime or violation against the people “.