Skip to content
HomeMacgork of Abedi: edit Mosul battle over the world and we will do what we can to support them 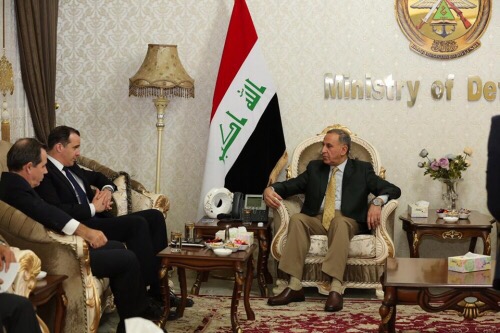 Research and Defense Minister Khaled al – Obeidi , on Friday evening, with the special envoy of US President [Barack Obama] Ambassador Brett Macgork, accompanied by the US ambassador in Baghdad , Stuart Jones, editing city of Mosul process.

A statement by the Office of the Secretary of Defense Agency has received all of Iraq [where] a copy of it, that “During the meeting , an extensive and in- depth discussion on the preparations carried out by Iraqi forces to fight a battle to liberate Mosul, and practical mechanisms to ensure the success of the required speed.”

The US presidential envoy, that ” all efforts should now be directed to the battle to liberate Mosul, they are and that was a battle the Iraqis , but we prepare it the battle of the whole world, and that the end of Aldoaash where Starkh new international era, and that the United States will do what it can to support the Iraqi armed forces, as well as the mobilization of an international effort effectively in humanitarian fields. ”

for his part, Minister al – Obeidi, that” the next few days will witness a movement upward to launch the liberation of Mosul process, preparations and preparations wide at all levels, stressing the determination to finish the fight in record time for the benefit of the people of Iraq Mujahid and his troops valiant, and that defeat Aldoaash will be uncertain actively support all Iraqis, and the assignment of the global forces of good , peace – loving. ”