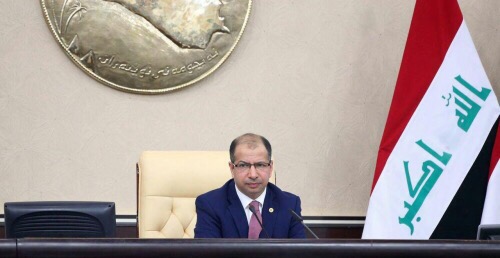 According to a brief statement to the Office of the Speaker of Parliament received by all of Iraq [where] a copy of it, that al – Jubouri , “filed a lawsuit in the court of inquiry Karkh against al – Obeidi.”

Jubouri said according to the statement , ” has been the formation of a team of lawyers to follow up on allegations of false and misleading public opinion and defamation and insult institutions sovereign state “in reference to the accusations and defense minister.

the head of that parliament” believes in the ability of the Iraqi judiciary to reach the truth and punish the guilty. ”

the House of Representatives had been questioned defense Minister Khaled al – Obeidi, the first on Monday, without resolving his decision interrogation postponed it to the next sessions.

he accused al – Obeidi, at the meeting, Parliament Speaker Salim al – Jubouri and deputies to exercise extortion to pass arming decades around suspicions of corruption worth millions of dollars, said al – Jubouri , “March political blackmail to pass arming and buy cars decades processes for transmission to those close to him for the purpose of obtaining kickbacks to Iraqi blood account .

parliament Speaker Salim al – Jubouri and strongly denied accusations the defense minister , “calling it” the play to thwart his interrogation , “declaring that he would” sue – Obeidi to these accusations and hauling raised by the Commission on Public integrity to investigate them. ”

Jubouri said, he will be in court and that he would not preside over meetings of the parliament until the check his innocence of the charges of corruption.

for his part , the face of Prime Minister Haider al – Abadi integrity Commission to investigate the allegations raised in the questioning of the Minister of Defence in the House of Representatives hearing on the corrupted files that are to cooperate with the committees to verify the House of Representatives on the subject and not one is above the law.

Abadi also ordered today to prevent travel all the characters and names contained in the charges, “in order to investigate the validity of the allegations and that the seriousness of the charges contained” and expressed forces Union reservations about the procedure and considered “outside the competence and jurisdiction.”

the Commission announced the parliamentary integrity, the direct formation of a committee to investigate these allegations.

the Chief prosecutor General / federal judiciary, moving complaint public right against all those named in the words of Secretary of defense during the questioning in the parliament session, which includes assigning the facts of corruption to the ones mentioned.

Accordingly, the Supreme judicial Council decided to form a body investigative jurisdiction to investigate mentioned subject in coordination with the Commission on Public integrity.