Skip to content
HomeUrgent Integrity Commission: Defence Minister will deliver his testimony tomorrow and then the speaker of parliament 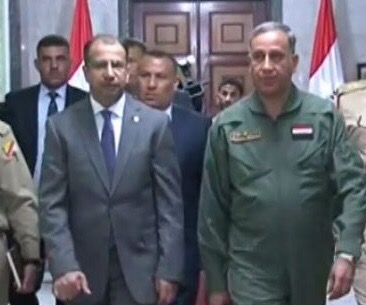 head of the Integrity Commission Yasiri Hassan announced that the Commission will hear testimony on Thursday to Defense Minister Khaled al – Obeidi on his recent statements in the House of Representatives hearing. ”

He pointed Yasiri , according to a statement of the Commission received by all of Iraq [where] a copy of it, that ” the Commission will summon all the names that were mentioned at the meeting, starting with the President of the House of Representatives [Salim al] to the other members.”

And that ” the Authority does not need to submit a request to lift the immunity deputies mentioned in the al – Obeidi ‘s remarks; because the Authority is an investigative procedures preliminary. ”

Yasiri pointed out” by the Authority field teams with the task of opening the defense ministry files , particularly the issues mentioned , such as the issue of feeding the soldiers, showers and cars of Mercedes and deal Aviation and other issues and contracts for the ministry, and will be announced the results of these first teams go like the successful experience of field teams and phones that have authored the body was in a number of ministries and institutions, and resulted from the referral of senior officials to justice and restore billions of dinars to the state treasury, as well as stop wasting huge amounts of money. ”

He noted Yasiri issue of Trath on the subject by his resignation earlier said , ” despite the presentation of resignation to the Prime Minister at the end of the month of Ramadan [last] However , the circumstances that have occurred especially what happened recently in the interrogation of Defence Minister session pushed me to wait to move to resign procedures; take into account the public interest and importance and seriousness of the information received in the last interrogation session. ”

He stressed” the need for asylum exposed to blackmail and bargaining to the judicial authorities and regulatory bodies; in order to take the necessary measures against extortionists legal procedures and Almsaumen “no matter how senior Their height or believe strongly backgrounds partisan or political , “stressing the readiness of the Authority to carry out operations adjusted against any official or politician or person exercising blackmail or threat to employees or officials operations; in order to Zlhm or force them to indulge or slipping into the operations of corruption at the expense of public money.”

He called Yasiri “officials and citizens need to cooperate with the Authority through communicated cases of extortion; to implement adjustments in flagrante delicto for those involved; to be an example to others, and “the exposure to blackmail or compromise he stakeholders from regulatory agencies and the judiciary notice, and this is a legal requirement and is not Joizia or special mood; so as not to miss the opportunity in the arrest of those involved and they Mtalpson red – handed, but so as not to execute or weaken the evidence later. ”

He called on Prime integrity” of citizens and officials and members of the House of Representatives Commission all to extend the Authority with their guides and Akhbarat supported, particularly those relating to compromise or blackmail to state employees or officials government; for the purpose of subjecting them or Zlhm from the right path and to involve them or force them to cover up or condone corruption operations; in order to take the necessary investigative steps. ”