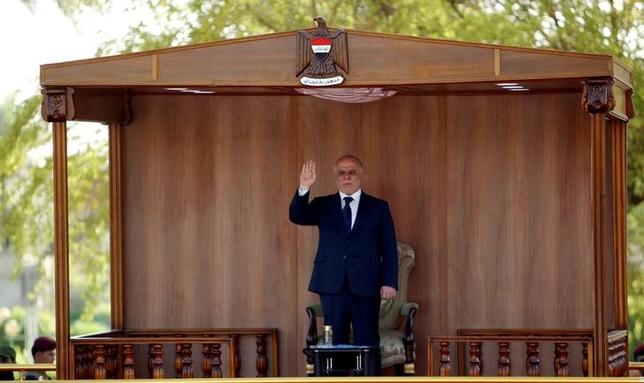 ordered an investigation on Monday into allegations of corruption in weapons deals that risk re-igniting a political crisis ahead of planned military moves to retake Mosul from Islamic State.

Infighting over anti-corruption measures, which stalled government activity for several months and sparked clashes between protesters and security forces in Baghdad earlier this year, threatens to slow momentum to recapture Mosul and capitalize on battlefield gains against the ultra-hardline militants.

Parliament Speaker Salim al-Jabouri denied charges of corruption made at a closed parliament session by Defence Minister Khaled al-Obeidi, who later said on his official Facebook page that he had details of blackmail relating to weapons contracts.

Obeidi provided no evidence in the online post, and it was not clear if the session would be broadcast. A separate message said several MPs were suspected of similar crimes.

Abadi said in a statement that he had directed the Integrity Commission, a government body tasked with fighting corruption, to investigate the accusations.

Obeidi had been summoned to parliament to respond to allegations of graft in the Ministry of Defence, which has been accused of wasting billions of dollars in public funds and weakening the armed forces to the point where they collapsed in 2014 in the face of Islamic State.

“What happened today was a charade in order for the questioning not to be held,” Jabouri said in a televised news conference following the session.

Islamic State seized a third of Iraq two years ago but has since been pushed out of many of those areas by Shi’ite Muslim militias and a military that is slowly being rebuilt with the support of a US-led coalition.

Former Prime Minister Nuri al-Maliki, who was forced to resign following the Islamic State takeover, was acting defense minister at the time.

Abadi has been trying for more than two years to tackle corruption in Iraq, which ranks 161 out of 168 on Transparency International’s Corruption Index, but has faced resistance from much of the political elite.

Obeidi told state television in an interview on Saturday that the summons to appear in parliament was “a conspiracy by the corrupt, a political targeting because of tackling corruption”.

He said since taking over the ministry he had cut down significantly on graft in weapons deals and “ghost soldiers” – army members who do not exist but whose salaries are collected.