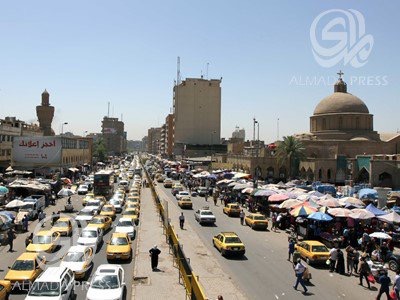 Republic Street in central Baghdad, which up old business district (Shorja) the rest of the areas of the capital Imaging (Mahmoud Raouf)

He attributed the financial advisor to the Prime Minister Haider al-Abadi, Tuesday, lower central bank sales of foreign currency to the decline in demand for consumer goods by about commensurate with the current economic circumstance, and with several economic experts “useful for monetary policy and in line with oil revenues decline and pressure government spending,” confirmed oil Marketing company (SOMO), exporting around two billion and 508 million dollars of crude during the month of June.He was placed source confirmed on Monday (25 July 2015), the central bank sales of the dollar stood at $ 17 billion, since the beginning of the current 2016 and so far, indicating that it recorded a decrease of three billion dollars over the same duration of 2015 past.

He says the appearance of Mohammed Saleh said in an interview to the (long-Presse), “The decline in central bank sales of foreign currency caused by a decline in aggregate demand for consumer goods, especially durable ones, and thus reduce the import of” denying “the relationship of that decline the actions taken by the central bank recently started” .

He adds the benefit, that “the import of energy today is lower than in the year 2013, and that the central bank sells foreign currency, according to the monetary policy that achieve exchange rate stability,” he returned that “the demand for commodities is suffering from a contraction phase in turn led to a decline in demand for foreign currency.”

And confirms the financial advisor to the Prime Minister, that “the decline in central bank sales of natural dollar as a result of the economic conditions of the country and has no negative repercussions as sharp as some believe,” returned her “natural phenomenon commensurate with the economic situation of the country, especially the stocks of durable goods sufficient Iraq for up to three years. ”

He says economic expert on behalf of Antoine, in an interview to the (long-Presse), said that “the central bank reserves of foreign currency depends on oil sales, which declined during the past two years,” noting that “the central bank has become in recent months, does not meet all the requests that come to him from currency auction, according to the monetary policy, as a result of the continued firming dollar sales claims. ”

Antoine believes, that “the central bank sales decline of foreign currency affect the imports, and these are interrelated problem,” calling to “encourage productivity imports that serve industrial companies and encourage employment and promote national resources, rather than goods and consumer goods.”

Attention economist to, that “the depreciation of the currency auction is useful for monetary policy in Iraq sales and not have negative repercussions, as some believe, being kept in dollars for the purposes of development for the development of various labor and industrial and agricultural production and operation of the hands of the working sectors to reduce unemployment.”

He says economist Ahmed Rehn, said in an interview to the (long-Presse), “The decline in central bank sales of foreign currency three billion dollars is not large compared to a decrease of the general budget and imports of Iraq’s revenues from foreign currency as well as lower government spending.”

Rehn adds, that “the decline was consistent with the rest of the economic activity of the country,” pointing out that “the recent actions taken by the Central Bank of Iraq, which is unrelated to the amount of what sells it from the dollar.”

Explains economist, that “foreign currency can be up to the private sector than ten windows or even twenty and quantity of the same,” he said. “When punish banking company or a financial transfer or a bank, depending on the deal with the central bank window for foreign currency, this does not mean reduce foreign currency sales because the same quantity sold to banks or other companies. ”

For his part, reveals a source in the National Oil Marketing Company (SOMO), for “the export of Iraq’s 95 million and 200 thousand barrels of oil during June 2016 from the southern ports.”

According to the source, who asked not to be named, said in an interview to the (long-Presse), “The cash revenue realized from the sale of oil to last June, amounted to two billion and 508 million dollars,” returned as “good if what has been calculated over the year, according to specialists.”

The central bank sold dollars to banks at the moment of the amounts transferred to accounts in banks abroad at a price (1190) dinars per dollar, and the cash sales price was 1190 dinars per dollar.