[Oan- Baghdad]
Central Bank of Iraq , congratulated the Iraqi people on the occasion of the inclusion of the marshes andarchaeological sites in Iraq as part of the World Heritage list.
The bank said in a statement that he “decided to issue a commemorative banknote to commemorate this important event globally.”
The UNESCO has ratified on Sunday to join the marshes and archaeological areas in Iraq on the World Heritage list.
http://www.alliraqnews.com/modules/news/article.php?storyid=43483

[Oan- Baghdad]
Research and Defense Minister Khaled al – Obeidi, Sunday, US Ambassador Stuart Jones , accompanied by the commander of coalition forces in Iraq , Gen. John MacFarland military operations against terrorist Daash gangs.
According to a ministry statement he said , “During the meeting , discuss the victories of the armed forces in Fallujah and follow the course of the ongoing military operations in the leadership of the Liberation ofNineveh operations and the significant progress achieved by the security forces and the support of the international coalition troops there.”
For his part , praised the US ambassador , according to the statement “victories achieved by the Iraqi army in Fallujah and the rest of the other cutouts, and emphasized the continued support of the United States to Iraq in order to expedite the resolution of the fighting and defeating the terrorist organizations and the liberation of the land of Iraq Conception cliques of satisfaction. ”
http://www.alliraqnews.com/modules/news/article.php?storyid=43491

Iraqi forces have completed bridge across the #Tigris to reinforce positions and prepare offensives towards #Mosul. 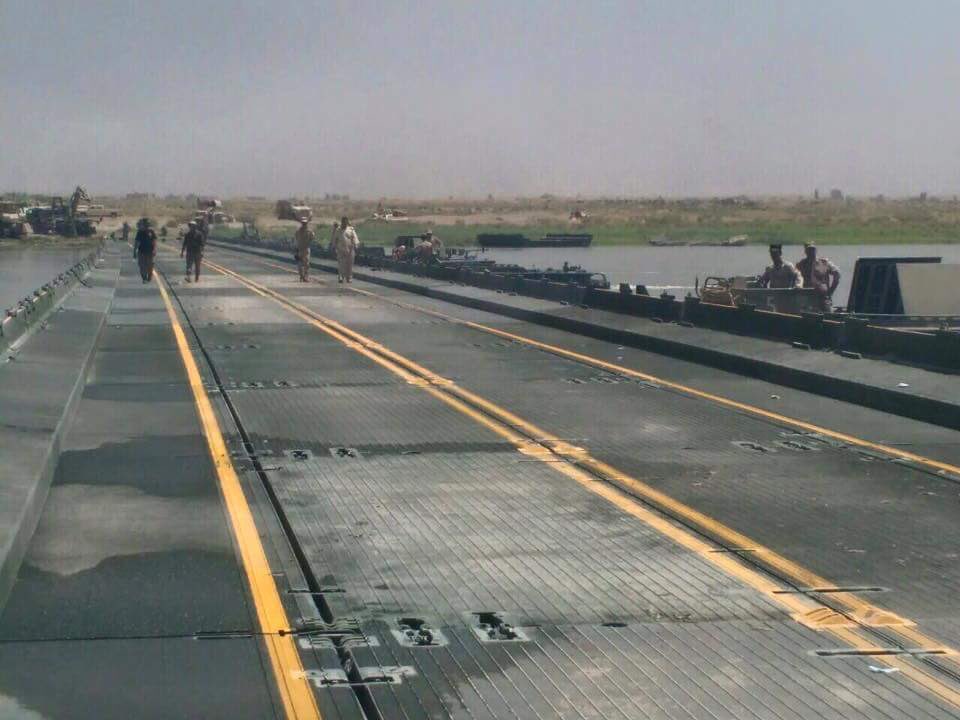 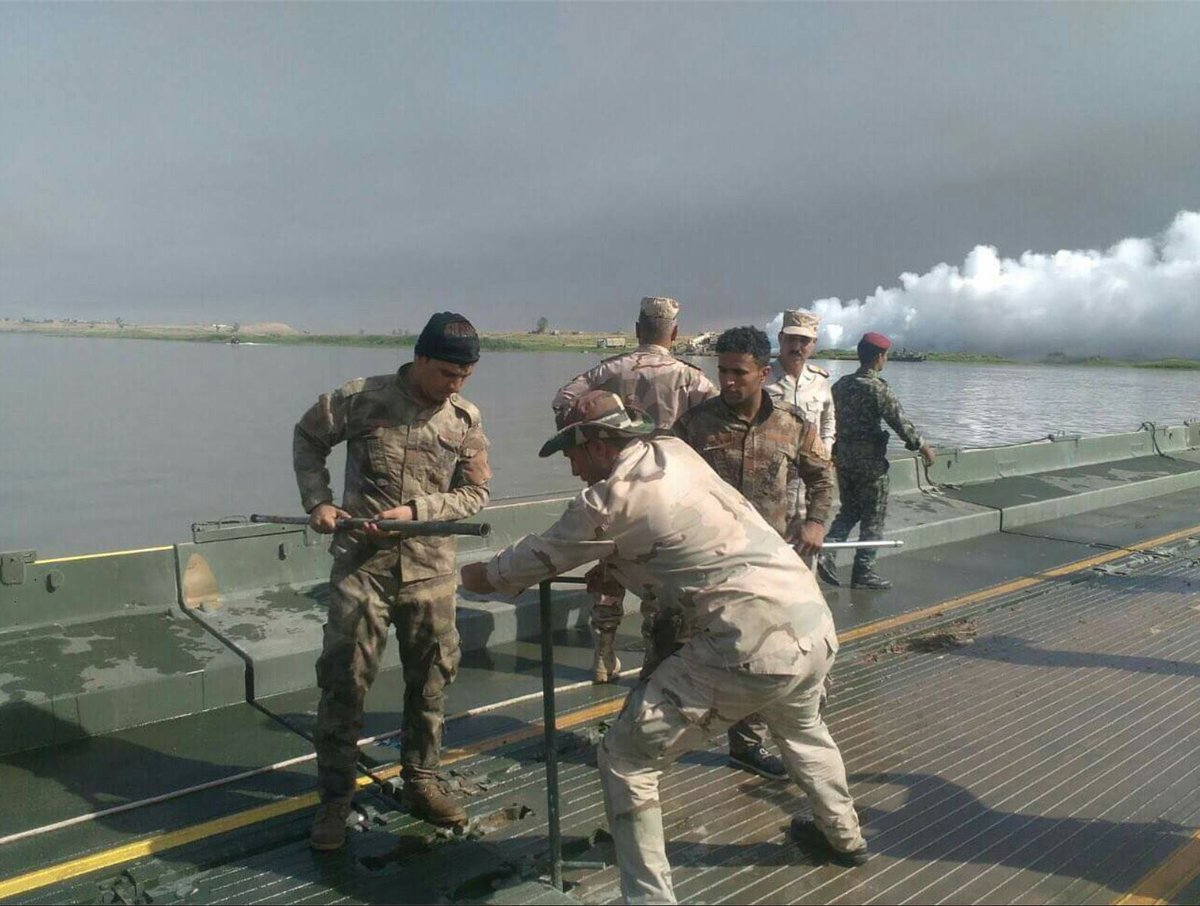 46 foreign and defense ministers will be in #Washington this week to coordinate next phase of coalition campaign to defeat #ISIL. 1/4

The Director General of the Department of banking and credit in the central bank Ihsan Shomran Yasiri, the extension of the period under which implements the decision to raise the foreign banks operating in Iraq ‘s capital to $ 50 million, the first to raise capital to $ 25 million in two phases over a period will last until December 31 (December) of the current year. The second raise capital to $ 50 million during the period ending on December 31 of 2017.
He said al – Shammari said in a statement to «life», the Central Bank of Iraq was «announced the decision to raise the capital of foreign banks operating in Iraq to $ 50 million instead of 70 million, after the meetings of the governor« Central »on the Keywords with a delegation representing the Lebanese banks at a time former », pointing out that« the discussion touched on the possibility of facilitating the conditions to help the advancement of the duties of the Lebanese and foreign banks specifically, in contributing to the development of banking operations in the Iraqi market and to increase its ability to compete with the Iraqi banks in attracting economic activity size ». He added that « the capital increase will allow the banks concerned to double its presence in the area of Iraq, by opening new branches and expand its lending and funding base.»
The minimum capital exact money to open a foreign bank in Iraq was $ 7 million. But the central bank felt that the advancement of the sector requires the lifting of foreign banks’ capital in the form of position to work in the market, and intercepted a Lebanese banks on the decision to lift it to $ 70 million, because the Iraqi banking market is not conducive to profitability because of the security, political and economic conditions. And it has applied to the central bank falls for his decision, but he refused, until the conclusion of negotiations to agree on an amount of $ 50 million in two phases.
He pointed banking expert Abdul Aziz Hassoun, that the Banking Act No. 94 of 2004, the Council pledged to ensure the foreign bank ‘s management , which allows building on the CBI request for funds to cover the obligations they impose on the branch in Iraq to exercise its banking ».
He explained that «includes one type of branches, which carry out work on its public administration and be fully responsible for financial commitments». But it pointed out that the law «does not mention private capital branch at the time of the Iraqi Central Bank foreign banks committed to allocate the amount of seven million dollars as head of operating money for the branch.»
He announced that the Association of private banks in Iraq «discussed the decision», and warned that «capital request of section greatly weaken the strength of the commitment of its public administration responsibility to cover all the branch ‘s obligations, but the Iraqi Central Bank to raise capital to $ 75 million, and reduced again to 50 million ». He said that it «will increase the vulnerability of public administrations commitments for branches of foreign banks and deviates from what is clearly aimed at the articles of the law, and perhaps the legal loopholes created by the weakness in the performance of obligations that exceed the limits set by the law for banks licensed in Iraq.»
Despite the diversity of Arab and foreign banks, officials in the sector saw, most of them do not have much capital , so work is limited on speculation in the currency auction process, to achieve quick profits will reflect negatively on the reality of the local market. They declared that the files opened and owned by foreign and private banks, proved the existence of smuggling money out of the country, through daily deal with the central bank auction.
According to experts, the deposits in the operating banks in Iraq , whether governmental or civil amounting to 70 trillion dinars (about US $ 60 billion), while the total of Iraqi private banks’ capital increased from $ 30 million in 2004 to one billion and 600 million end of 2014, except as branches owned by Arab and foreign banks operating in Iraq. The number of private banks from 17 in 2004 also increased to 31 the end of 2014, while thenumber of its branches in Baghdad and the provinces has increased to more than 800, to compete in the number and level of services bank branches «Iraq» and «rational» government.

Japan announced, on Sunday, support development programs and reform in Iraq four new grants totaling 21 million and 170 thousand dollars, administered by the World Bank, while shown that granting supports four areas related to social protection and modernization of the national payments system and promote the “safety and reliability”, and improve the performance of activities business, and support government reform, she expressed the hope that this will contribute to the development policy loan along with financial reform $ 220 million, the development of public and private sectors in the country.

According to the Japanese Embassy in Baghdad, said in a statement, received a (long-Presse) a copy of it, that “Tokyo supports the Iraqi government’s development programs and reform in four new grants totaling 21 million and 170 thousand dollars, to enhance institutional efficiency.”

The embassy said that “the World Bank runs four grants that focus on laying the groundwork for the integration of social protection systems and promote efficiency and help the government develop a comprehensive development of systems of national payments plan”, usually that “the four grants also contribute to improving the business environment and encourage private sector growth, especially small and medium-sized enterprises; and provide economic advisory support to continue economic reform efforts in Iraq. ”

Quoted the Japanese embassy for the Resident Representative of the World Bank in Iraq, Robert Bo quality, saying, “The existence of a strong and effective social protection and modern systems of payments was crucial to the reform efforts undertaken by the Government of Iraq,” noting that “The World Bank is committed to helping the Government of Japan, to provide support for the Iraqi people. ”

She explained the embassy, ​​that those “projects will provide significant support in four areas, the first implementation of the Strategic Action Programme Iraqi social protection, which includes the construction of the National Unified Registry of Iraq and the development of the skills of social workers to target poverty, and the application of legislative reforms to the pension system,” pointing out that “the field the second focuses on updating the national payments system to enhance the safety and reliability of payments in Iraq and contribute to the stability and efficiency of the financial system and increase the circulation of financial services. ”

According to the Japanese Embassy, ​​said: “The third area which is supported by the improvement of the performance of Iraq in the areas covered by Doing Business Report issued by the World Bank, and support the operation of government public service centers,” and added that “fourth area the strengthening of resources to support the agenda and the efforts of the government reform by providing specialized advice and consultation on the ground operations. ”

For his part, Ambassador of Japan to Iraq, Fumio Iwai, according to the statement, that “Japan is still committed to supporting the reform efforts of the Government of Iraq, including financial and economic reforms,” ​​and expressed the hope that “the help of the four new grants, as well as loan policy development and financial reform $ 220 million, in the promotion of these reforms and the development of public and private sector in Iraq. ”

The embassy also said, “The World Bank portfolio in Iraq, made up of three operations with a net commitment of a total of one billion and 905 million dollars,” saying it “includes transportation project is being implemented in the country’s south, and the process of emergency Development resume infrastructure and public services in the municipal areas liberated by the government, and the process of financing for development policies, one billion and 200 million dollars to help Iraq to overcome the fiscal crisis and push ahead with reforms. ”

The United Nations, revealed in (the 14th of July present in 2016), to provide the Japanese government seven million dollars as a grant “urgent” to provide services and the creation of schools for displaced children in Iraq, while likely worsen the situation in the country before his recovery, stressed the need for about 170 million dollars to be able to continue emergency relief and other assistance program during the current year 2016.