The Chechen-born, hugely popular ‘minister of war’ was killed in fighting close the the beleaguered Iraqi city of Mosul.

His death – purportedly at the hands of the US – was falsely reported in the past but the claim is now being supported by a number of analysts and pro-Isis social media accounts. However, The Independent has not been able to verify the information.

Isis media outlet Amaq announced the news on Wednesday evening, saying al-Shishani was killed in combat in the Iraqi city of Shirqat, south of Mosul.

Shishani, also known as Omar the Chechen, ranked among America’s most wanted militants under a US programme that offered up to $5 million for information to help remove him from the battlefield.

Born in 1986 in Georgia, then still part of the Soviet Union, the red-bearded Shishani had a reputation as a close military adviser to Islamic State leader Abu Bakr al-Baghdadi, who was said by followers to have relied heavily on Shishani.

In March, the Pentagon said Shishani had likely been killed in a U.S. air strike in Syria 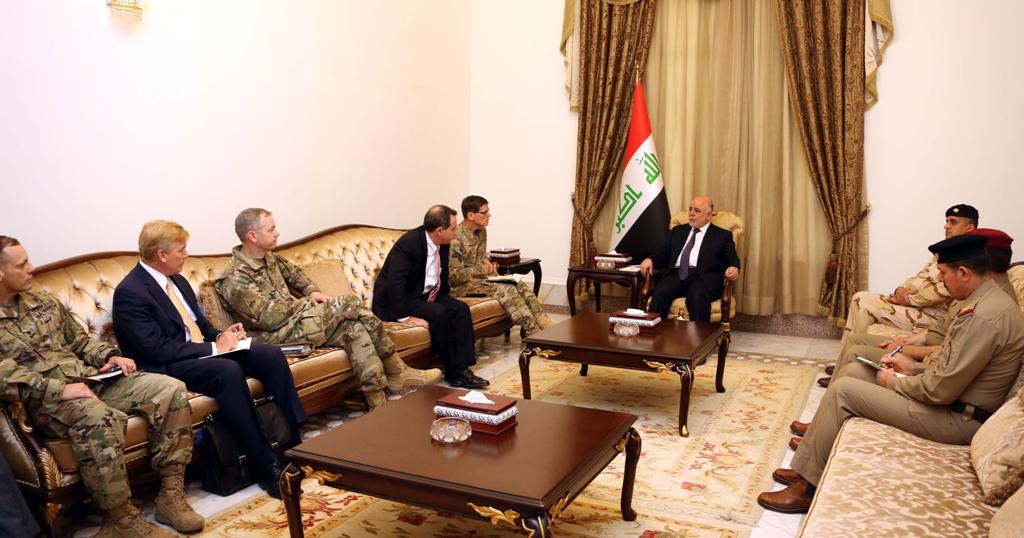 He said the cleric Moqtada al-Sadr, on Wednesday, moving the demonstrations in Tahrir Square in central Baghdad, despite the pleas of the Iraqi Council of Ministers to be postponed, and this was rejected by the attack on the security forces, the promise of a breach of the security of Baghdad, “Cursed”, he considered his visit to Baghdad, “reassurance to the population a message” .

Sadr said in a press conference held by Liberation Square in central Baghdad and attended (range Press), “The demonstration will be on next Friday in Tahrir Square, and will be peaceful,” rejecting any attack on security forces by the demonstrators. “

Sadr promised everyone that disturbs the peace in the capital, “Cursed” and urged not to wear military Zein in the demonstrations and prevent the armed manifestations, “following up” that I came to Baghdad is the message of reassurance to the population of the capital. “

He said the cleric said Baghdad must be secure, stable and must be maintained on the blood of their people. “

The Iraqi cabinet on Tuesday called for, to postpone to prevent the country into chaos.

After their participation in the Iraqi Council ofRepresentatives in the first legislative term of the third legislative year, Parliament decided to Kurds in the Iraqi parliament to leave Baghdad and return to the Kurdistan Region, because of the deteriorating security situation.

He explained Amin, “that the reason for our return to the Kurdistan Region is due to the deterioration of the security situation, especially after the announcement of the millions upcoming demonstrations called by the cleric, Muqtada al-Sadr on Friday, and also to the lack of hearings in parliament in the coming days.”

The Iraqi capital Baghdad, has seen, on Tuesday, and a sudden preparations for a military review by the Iraqi army and the popular crowd residence on Thursday believed.

The Iraqi Prime Minister Haider al-Abadi, had called on Tuesday to postpone the demonstrations millions in order to avoid chaos in the country.

{Baghdad} Euphrates News received Defense Minister Khaled al-Obeidi, at his office this afternoon Wednesday, July 13, 2016, Gen. Joseph Votal {}, commander of US Central Command in the US military and his accompanying delegation.
A statement by the Ministry of Defense agency {Euphrates News} received acopy of it today . “During the meeting , which was attended by the Ambassador of the United States in Baghdad {Stuart Jones} review the nature of military cooperation between the two countries, going to liberate the city of Mosul and efforts, and the role of the international coalition to help Iraq the next phase, as well as the nature of the developments and military stance against Daash terrorist.
He continued , “Gen. showed Votal admiration for the great triumphs of the Iraqi forces in Fallujah and Qayyarah, expressing his country ‘s readiness to provide all kinds of possible support for Iraq during the next stage.”
He added that “Gen. Votal , you may also condolences to the incident of thecriminal bombing in Karada, stressing that the bankruptcy of terrorist organizations has reached the maximum range, and it is necessary to collaborate international effort with Iraqi efforts to finish off the organization Daash terrorist. ”
and saw the Karrada district of central Baghdad last week, a suicide terrorist great, carried out a car bomb loaded with a quarter of a ton of high explosives led to a central burning shopping in the area, killing 292 people and injuring 200 others, according to government reports from the Health Ministry and theBaghdad operations command and criminal evidence.
it condemned the religious authority in the words of its representative in the holy city of Karbala , Mr. Ahmad Safi Friday, Karrada bombing targeting the shrine ofMr. Muhammad peace be upon him in Balad, criticizing the government not taking the necessary measures to address security breaches, noting that “complacency with spoilers and losers on the blood of citizens account is unbearable , ” .anthy
http://alforatnews.com/modules/news/article.php?storyid=122102

Like Loading...
History of edits:: 13/07/2016 22:04 • 310 visits readable
{Baghdad} Euphrates News security forces decided to impose a ban on night-roaming in the city of Baghdad.
According to an informed source told {Euphrates News} “The secretary troops would impose roaming from 12 o’clock at night ban until six o’clock in the morning,” .anthy
http://alforatnews.com/modules/news/article.php?storyid=122109

arrived in the Central Command , the US military commander General Joseph Votal, on Wednesday evening to the capital Baghdad.

The visit comes two days after a similar visit by US Secretary of Defense Ashton Carter to Baghdad during which he announced the intention to send 560 advisers to Iraq after the US.

He called on President Fuad Masum, on Wednesday, the 58th anniversary of the founding of the Republic of Iraq and the revolution of July 14 to establish diplomatic and economic relations with all countries of the world on the basis of equality and mutual interests, while stressing the need for refusal axes “policy.”

Masum said, he salutes “the fifty-eighth anniversary of the founding of the Republic of Iraq and the anniversary of the revolution July 14 national 1958”, praising “the principles of national independence, social justice and the values of coexistence and national unity, which called for holds dear revolution that recalling with pride and appreciation of the role and sacrifices of the Leader of the Revolution leader Abdul Karim Kassem and his colleagues national officers or the Free officers “.

Infallible and stressed “the importance of the principles put forward by the revolution, to establish diplomatic and economic relations with all countries of the world on the basis of equality and mutual interests, and refused axes policy manifested in Iraq’s commitment to the positive policy of neutrality and withdrawal from the Baghdad Pact and the issuance of the law (80), who returned to Iraq rights oil, and its recognition national rights of the Kurdish people and issued for CCS and the law of agrarian reform and many other national and achievements. “

It is noteworthy that a number of Iraqi army officers was led by Abd al-Karim Qasim and Colonel Abdel Salam Aref led in 14 of the July 1958 military coup was the overthrow of the monarchy and the declaration of the Republic of Iraq is considered by some “bloody”, but supporters of the coup or revolution as fixed label, We see that the change was a positive impact on the lives of Iraqis over the past period.

Gold climbed on Wednesday, recovering from its lowest level in nearly two weeks, amid expectations of more economic stimulus helped boost investor appetite, while the dollar remained stable.
Gold climbed in the spot trading 0.5 percent to $ 1338.55 the ounce, after touching US $ 1327.30 an ounce earlier, the lowest level since the first of July this month. The yellow metal fell 1.7 percent yesterday in the biggest daily loss since 24 May last.
Gold climbed to US futures contracts 0.6 percent to $ 1341.60 an ounce, gold has increased about $ 100 an ounce, since the vote in favor of Britain out of the EU, which prompted investors to shift their liquidity to safe – haven assets. Gold has faced some pressure in the wake of strong jobs data in the non – agricultural sectors in the United States issued Friday, after five weeks of gains.
Among other precious metals, palladium touched its highest level in eight months at $ 644 an ounce. And platinum rose 0.2 percent to $ 1088.20 an ounce, after falling for the first time in two weeks in the previous session. Silver rose 1.1 percent to $ 20.33 an ounce.

Aware of the Kurdistan Region and Iraq

The Ministry of Agriculture of the Government of theKurdistan Region, on Wednesday, formally from the Ministryof Finance and Economy, increase taxes on imported from central and southern Iraq , and agricultural products.

He added that “the decision to raise taxes will contribute to increasing prices of agricultural products in the Kurdistan region, and this will increase the profit of the Kurds farmers, reduces profit for traders who import products from central and southern Iraq.”

And it continued with the Kurdistan Regional Government and the Iraqi Minister of Agriculture, regarding a tax increase, where the minister stressed that “the Kurdistan Region have full freedom to raise taxes on imported from central and southern Iraq of agricultural products.” As reported by the sincere Ahmed.