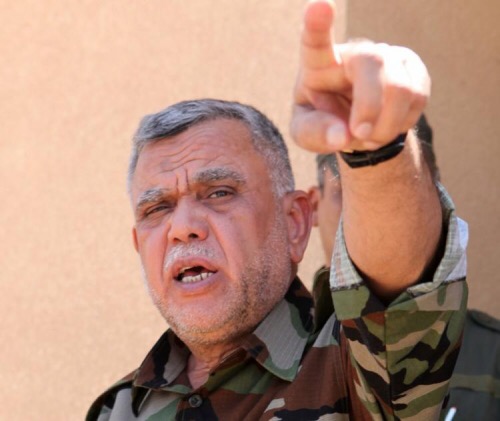 head of the Badr Organization and leader of the popular crowd MP Hadi al – Amiri rejected US Secretary of Defense Ashton Carter ‘s comments and private sending 560 US soldiers to participate liberalization processes the city of Mosul.

He said al – Amiri said in a statement to the mass Badr parliamentary received by all of Iraq [where] a copy of it, “the ability of Iraqis to liberate their land from terrorism without Berri foreign interference.”

Amery said: We decided that Iraq does not Daash and Americans place because the Iraqi people reject the replacement Daash terrorist the Americans . ”

he noted that” the Iraqis are able to liberate Mosul as liberated Baiji, Fallujah, Qayyarah, “noting that” the great experience gained by the crowd the popular security services through military operations against terrorism confirms that the liberation of Mosul a matter of time and that victory is near. ”

the Minister US defense Ashton Carter said on his visit to Baghdad today to send 560 additional US troops to Iraq, “noting that” these forces that are part of the international coalition will provide support for the Iraqi security forces, including infrastructure and logistics capabilities. ”

the Carter these forces “will strengthen these additional capabilities of the Iraqi security forces in the liberation of Mosul practical assistance.”

According to a US official, he said that “this new force to Iraq requested by Gen. Sean MacFarland, commander of the force of the international coalition against al Daash, bringing the total number of US troops in Iraq 4647 soldiers. ”