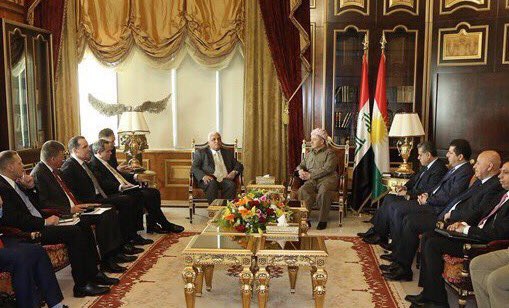 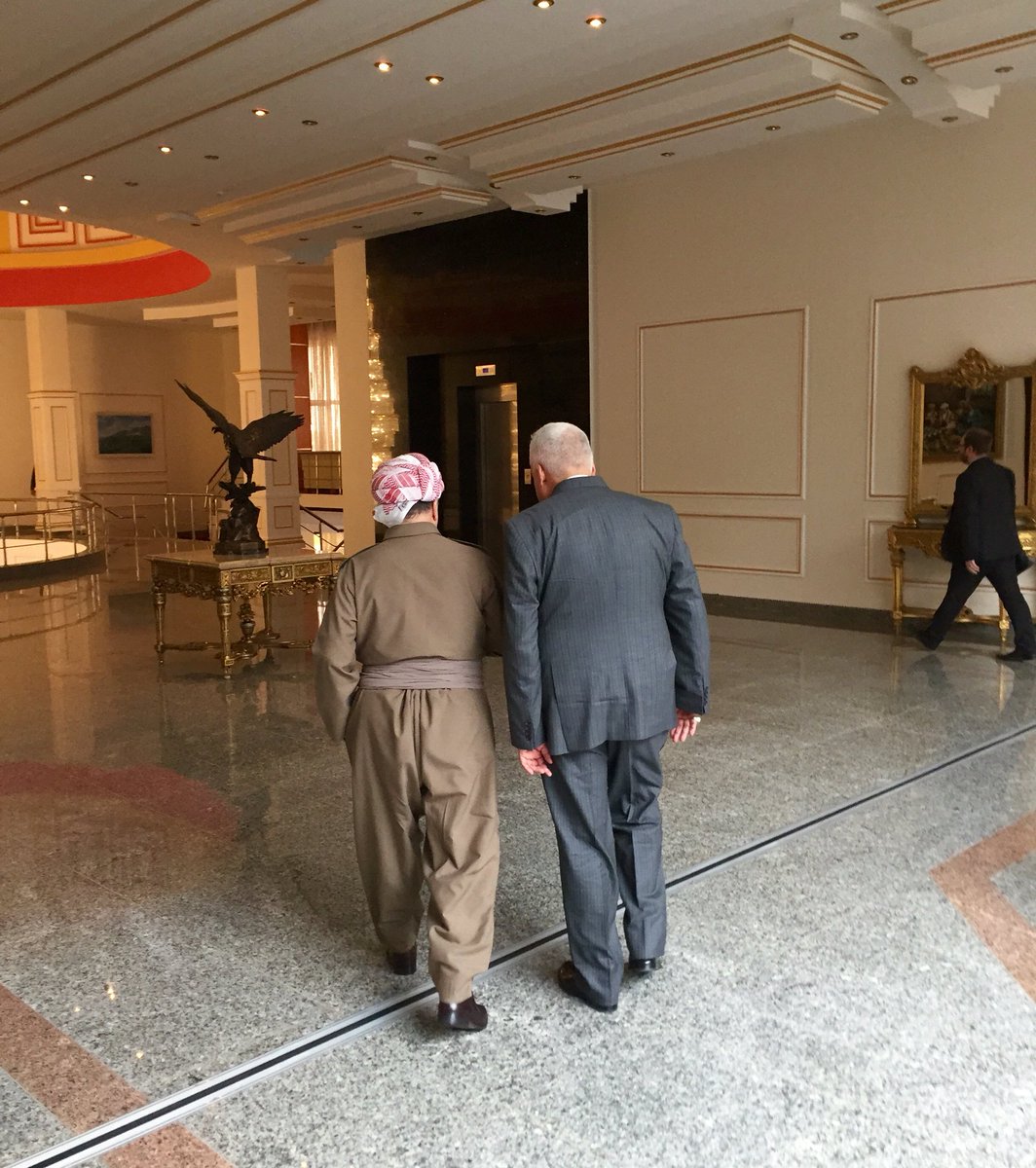 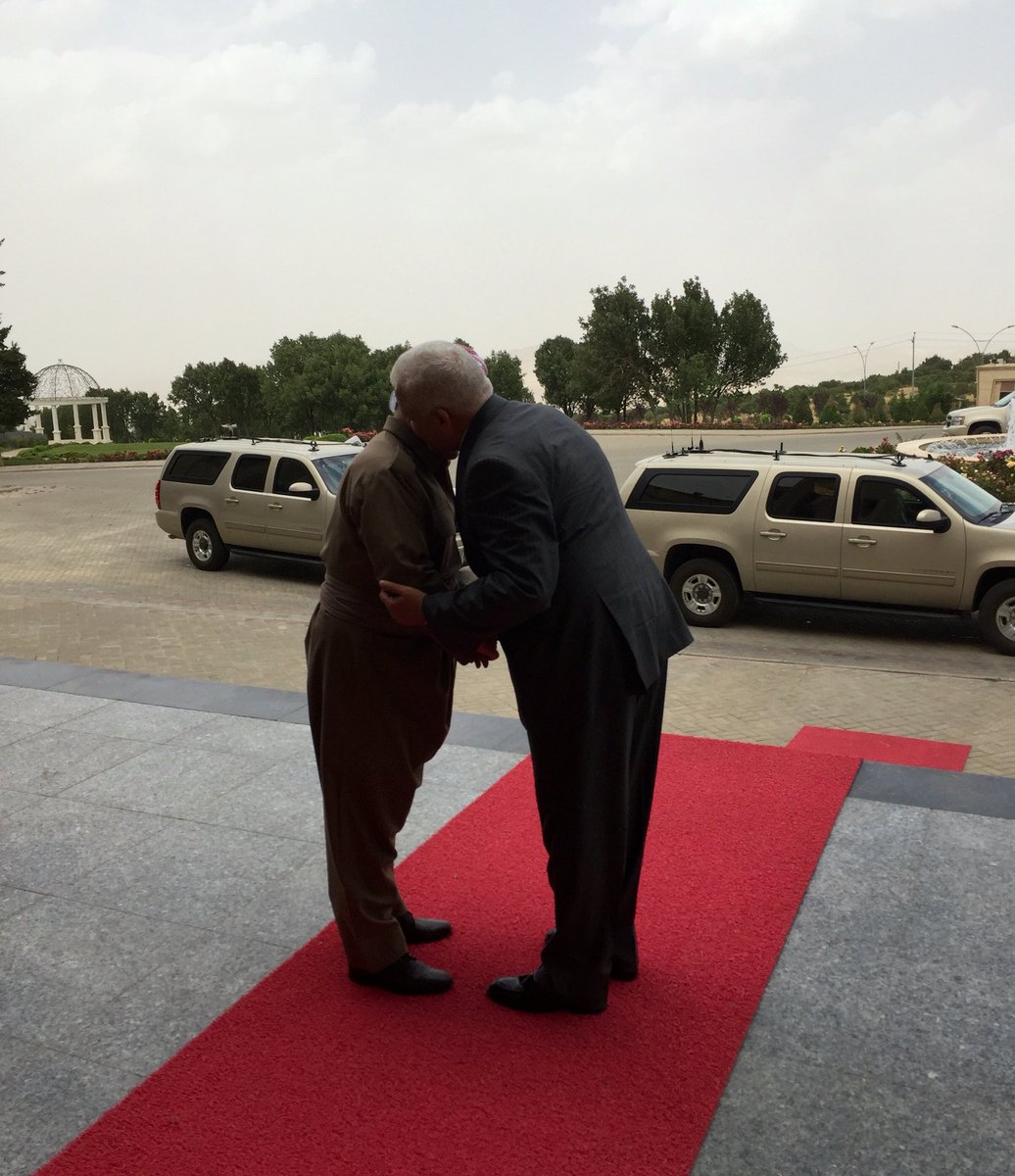 Landed in #Baghdad for talks with PM Abadi and other senior officials on next steps in the accelerating campaign to destroy #ISIL. #ISIS

He met the President of Kurdistan , Massoud Barzani province, on Sunday, with the Iraqi delegation to a joint US annexation of all of the Iraqi National Security Adviser Faleh al – Fayad and representative of US President Obama in theinternational coalition against al “Daash” Brett Mcgork, andUS Ambassador to Baghdad Stuart Jones and US Consul in Erbil Mathews Mettmann, and a number of officials and military commanders of Iraqis and Americans.

This came in a statement by the Presidency of the Kurdistan Region, Roudao Media Network received a copy of it, where the statement noted that Barzani provided an overview of field conditions for the Peshmerga forces on the battlefield and they stand up to attacks by Sunni Islamist al Daash.

According to the statement of the Iraqi National Security Adviser Faleh al-Fayad he has praised the role of President of the Kurdistan region in the face of major challenges and the war against terrorism and called for the deepening of trust and coordination and joint action between the Kurdistan Region and the federal government, stressing that the province and the Peshmerga forces are real partners for Iraq and the coalition against terrorism and the liberation of Mosul, again the Iraqi government’s commitment to the security and military commitments between the two sides in the war of liberation of Mosul.

{Baghdad: Euphrates News} between the official spokesman for the Oil Ministry, Asim Jihad said the ministry of our long-term plans to increase oil production process.

He said Jihad told {Euphrates News} on Sunday he was “increasing Iraq ‘s oil production comes in coordination with international companies operating in Iraq , according to all field, because fields vary depending on the production capacity and the quantities of reserves.”

And that ” has been put far – term plans for the process of increasing oil production . ” , pointing out that “our oil production exceeds 4.0005 million bpd and exports from the south and center 3.0003 million barrels.”

He pointed out that “there is a problem in the decline in global oil prices as our goal the sale of Iraqi oil at a good price and any increase will reflect positively on the economy national. ”

with regard to the oil agreement with the Kurdistan region between Jihad by saying that he” was the conclusion of an agreement between Baghdad and Erbil within the budget of 2015 and 2016 and provides for the delivery of the amount of oil to Baghdad or export through SOMO but the province did not commit , and the situation remains as it is the region ‘s oil issue for his own account . ” .is over

Important meetings today in #Erbil between Government of Iraq and KRG officials to prepare the ground for coming liberation of #Mosul.

fired body care for people with disabilities and special needs of the names of the first batch of beneficiaries designated a full – time salary.

The Director General of the Commission Nader al – Shammari said in a statement received by all of Iraq [where] a copy of it on Sunday that ” the salary payout from the month in which the medical committee ‘s decision was issued to the end of the sixth month – in June.”

The statement pointed out that ” the number [250] name of continued [2000] name in Baghdad that launched the amounts later and during the holy month of Ramadan and until the completion of the necessary measures. ”

said Prime Minister Haider al – Abadi Office victories in the city of Fallujah , a paradigm shift “in the war on Daash terrorist gangs in Iraq.

A spokesman for the office, Saad al-Hadithi at the press briefing, delivered on Sunday, said, “This victory is a milestone in the victories of our armed forces chain to flush out terrorists from the cities of Iraq and returned to the bosom of the nation and to their owners, principals, and represents a paradigm shift in the Iraq war path against Daash, how No battle of Fallujah has embodied the unity of Iraqis and would stand in general description of their evil and their country worse one “follows ..

said the World Bank, said on Sunday that the new labor law in Iraq , acknowledged the international world – class sought the World Bank to be transferred to Iraq.

And it formed the Ministry of Labour and Social Affairs Commission in coordination with the World Bank to put instructions applying the new Social Protection Act No. 11 of 2014.

The head of the Supreme Committee for Social Protection in Najaf Judge Raad Razak al – Tamimi said in a statement received by all of Iraq [where] a copy of it today that “Article 31 of the new social protection law No. 11 of 2014 stipulates determine the mechanisms for implementing the law and instructions for all areas, as an act of supreme committees and internal procedures and mechanisms to deal with the objections received to the protection committees to make decisions have installed an internal system. ”

He pointed to” the formation of the ministry of a supreme committee to issue instructions the new law , in coordination with the World Bank in order to transfer his experience to the country in terms of mechanisms of the new law Enforcement, as well as talking with him to help the sub – committees of social protection the subject of objections that must be given to the Commission after the announcement for the new comprehensive results. ”

said Tamimi , he “after the end of the work of the committee will be announced on the instructions and then start implementing the said law, stressing hold a workshop soon in Baghdad in coordination with the World Bank to clarify the issue decisions and explain the paragraphs of the law mechanism.”

for his part, the representative of the World Bank symbolic blessing that “there is coordination and joint action with the ministry, which came as part of the government to support the implementation of the road map for social protection strategy approved by the ministry with the World Bank for more than three years. ”

He added that” the ministry started implementing practical step to this plan , which is based on the provision of social guarantees for citizens in an attempt to alleviate the consequences of the economic and social situation because of the crisis experienced by the country and the terrorist attack that led to the displacement of large numbers of citizens and the increase in the poverty rate. ”

He said a blessing,” The Ministry began an important step which is to hold the beneficiaries of the social protection network field survey , which led to the exclusion of a large number of squatters on the network, while work is under way to find a mechanism for the reduction of squatters and engage in a reform process and wide in this sector, especially as the new law approved an international world – class sought the World Bank to be transferred to the country, adding that the World Bank will hold a meeting with the staff of social protection officials Sub – committees for the network, to identify treatments and find a mechanism to deal with objections about it. ”