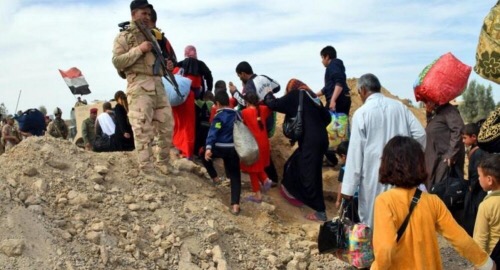 is the Prime Minister Haider al – Abadi implementation of recommendations made ​​by civilian crisis management cell about the relief of displaced persons from the city of Fallujah and help them.

A statement by the prime minister ‘s office received by all of Iraq [where] a copy of it, that Abadi is implementing the recommendations of the Committee “after the end of its meeting held today under the chairmanship of the Director of the Office of the Prime Minister and the presence of Jan Kubiš Special Representative of the Secretary-General of the United Nations and his Deputy for Humanitarian Affairs Lisa Krandi, the presence of Deputy Anbar governor and the mayor of Fallujah, in addition to representatives of ministries and representatives of relevant international organizations. ”

among the most important of those recommendations as follows:

1. In order to adjust the aid displaced Fallujah operations during the editing process, provide crisis cell in Anbar province , and the Committee of relief to the displaced inventory numbers of displaced families within 24 hours of the camps Amiriyah Fallujah and Habbaniyah and Khalidiya bridge Bzabz.

2. The Ministry of Health to secure 8 additional ambulances and Red Crescent Society holds four other cars, distributed with the crew on the four camps within 72 hours.

3 for sale . Speed ​​up the installation of mobile and emergency health centers to benefit from the support of the World Health Organization.

4 for sale . Vaccinations to start a campaign for the children of displaced families against polio after a break of two years and direct vaccination campaigns against typhoid disease.

E. Order an immediate initiation of doctors and health personnel in the Department of Health in Anbar, and to develop accurate plan to secure their shift in health centers in the camps for displaced people.

6. The Ministry of Health and the Municipality of Baghdad to secure a fleet of tanker trucks to transport drinking water and for home use.

7. Committee is responsible for coordinating the activities of relief at the head of the ministry sent teams of camps for displaced people to assess the situation of displaced people and raise the daily positions to address any shortcomings.

8. Securing funds needed to ensure the provision of services and rehabilitation of the operating budgets of the ministries concerned, in coordination with the local government of the province of Anbar, particularly in the provision of health facilities to the camps and in sufficient numbers.

10. Securing the delivery of electrical power to the camps all over the five days.

11. An emphasis on the completion of the delivery of food and drinking water to the camps under a minute plan to ensure delivering them continuously and balanced.