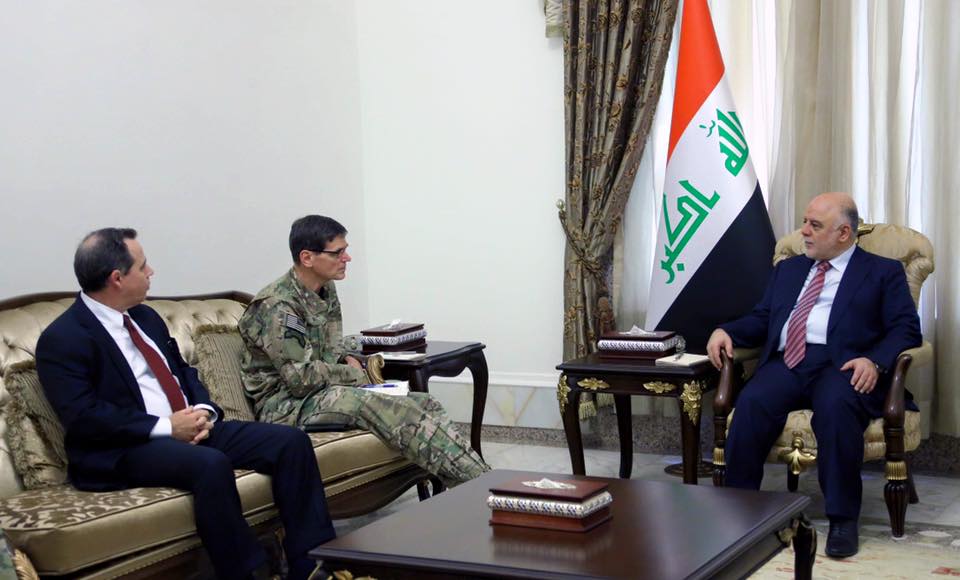 Speech now on TV: there is no place for Daesh in Iraq, leave our country now 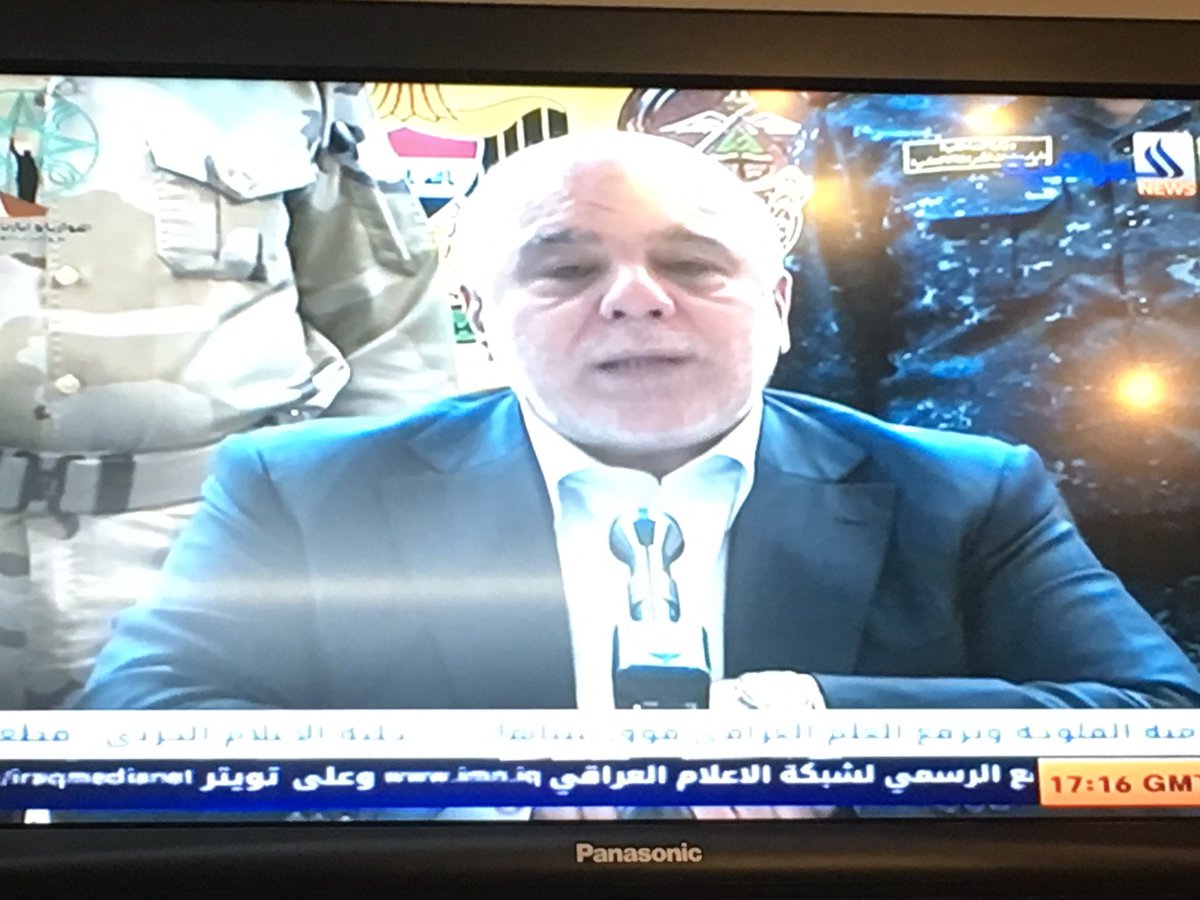 Fallujah liberation began on 22 May (left), completed in under a month 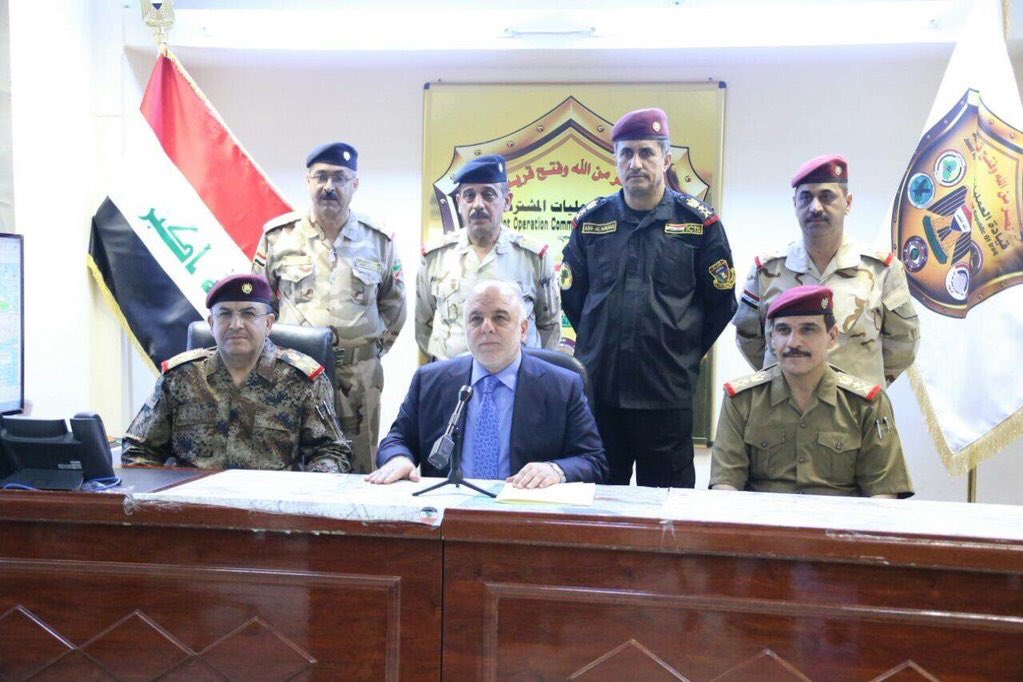 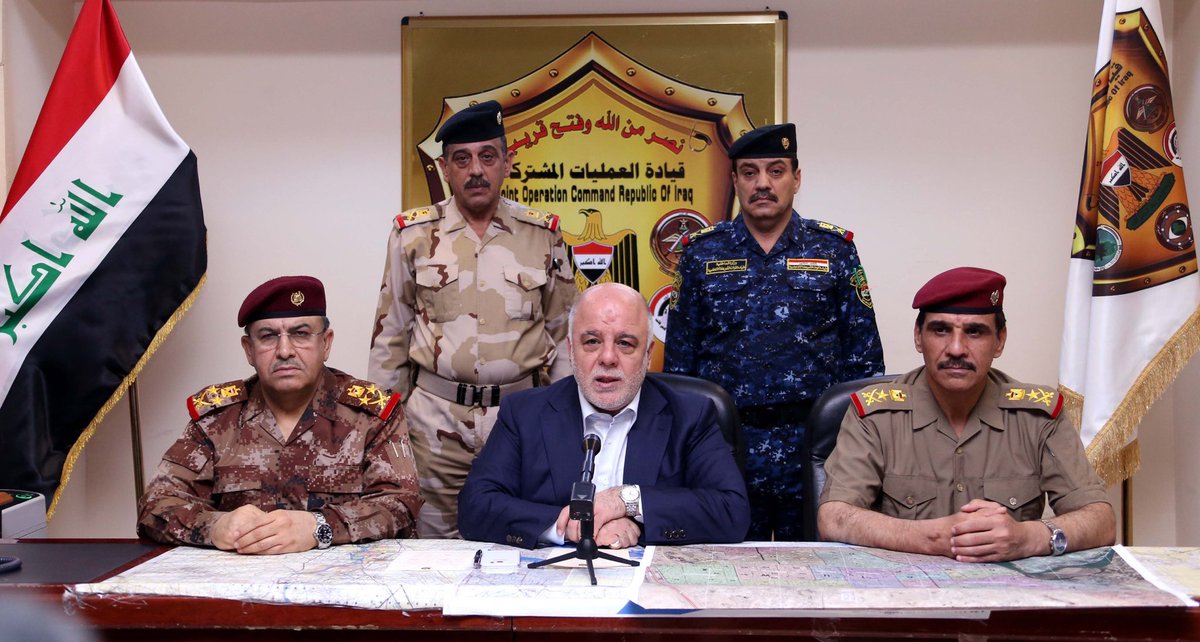 Secretary of Defense Ashton Carter told reporters at the Ministry of Defense Pentagon, ” the Iraqi forces retook part and not all of the city of Fallujah.”

The general commander of the armed forces , Prime Minister Haider al – Abadi, announced this evening tighten their grip on the inside Fallujah highlights strongholds Daash terrorist gangs in Anbar province.

he said that “victory is very close in Mosul to defeat another Daash in Iraq.”

he attributed the defense Minister Khaled al – Obeidi, the reasons for the defeat of Daash in the battle of Fallujah to “provide battlefield requirements and ensure sufficient military units and their coordination with the rush and the bravery of our soldiers heroes behind the refraction and the defeat of Daash in Fallujah, “stressing that the

” liberation of Nineveh will be at hand soon. ”

{Baghdad: Euphrates News} Prime Minister, said the commander of the armed forces, Haider al-Abadi, said Friday that our heroine has fulfilled its promise in the liberation of the city of Fallujah from Daash and tightened its control over the inside of the judiciary and the treatment of some of the outposts, saying to the people of Fallujah, Iraqi troops sacrificed for edit their city, in order to live in peace and security, in order to re-displaced people to the city, following the example of the Holy Prophet saying: today is the day today Compassion is the axiom maintained privacy.

Ebadi said in a statement, the agency {Euphrates News} received a copy of it today that ” the security forces tightened their control on the inside Fallujah and still there are some spots that need to be cleansed in the coming hours.” He added Abadi he drew all state institutions to “do Bastnfar all efforts in order to take care of civilians and provide all the assistance and provide them with protection and also, in the face of the security forces , which seized control of Fallujah to the protection of public and private property and take care of the security and safety of citizens. ” He pointed to Aldoaash in his letter , saying , ” I do not place you in Iraq, we have promised liberation of Fallujah, our heroine has fulfilled that promise, have your enemy , and Khzlokm these leaders who promised that it will endure , but it did not hold up and Takazlt fell; no place for you in this Iraq and Sthacbon all your crimes, Iraqis are united against you, get out of the country, Iraq is for all Iraqis. ” as eachother face to sons Fallujah , which he said “We have sacrificed our troops to liberate your city , in order to live in peace and security , in order to re – displaced people to the city. today , we want there to be peace and security in this city to your return and to live where and Ntosy the Messenger of Allah {God bless him not him}: today is the day Compassion is the axiom today maintained privacy. ” He continued , ” Our goal Saantekm and Ahramatkm, and we will make it impossible to maintain them , “noting that” the Iraqis from all provinces of Iraq sacrifice themselves in order to protect you and provide a decent living for you and you will live out unharmed victor. ” it is said that the security forces lifted the day the Iraqi flag Qaimqamip over Fallujah and building government complex building still inspired after its liberation from Daash terrorist gangs .anthy

Abadi, said Friday evening that Fallujah had returned to the bosom of the nation and our security forces control of the heart of the city controller, the connector next destination “follows ..http://www.alliraqnews.com/modules/news/article.php?storyid=40835

A statement by his office received by all of Iraq [where] a copy of it, that ” the general commander of the armed forces , Haider al – Abadi Prime Minister will direct the evening to the people of Iraq a statement victory liberation of Fallujah.”

And announced the Joint Special Operations Command / cell media war, today, edit building Alqaimmqamah in district of Fallujah, which represents the city center and government complex and raise the Iraqi flag over the premises.

the commander of the liberation of Fallujah operations team Abdulwahab al – Saadi told reporters that ” the security forces liberated the Nazzal neighborhood center of Fallujah, which was a stronghold of the leaders Daash” adding that “Daash began to fall apart bit by bit , and resistance It has become much weaker than before because of the successive blows that face the Iraqi army has. ”

Iraqi forces are locked in fierce for the Liberation of the city of Fallujah battles while working to strengthen its forces on the outskirts of the city of Mosul in preparation for the start of the battle of liberation.

Fallujah in better shape than Ramadi because less US airstrikes due to civilian presence, but thousands of IEDs/booby traps to clear

Like Loading...
History of edits:: 17.06.2016 15:25 • 7 visits readable
[Oan- Baghdad]
took over the Ministry of Defence boost aid by the French government and the Iraqi army, which is about amounts of diverse weapons, and various ammunition, and military equipment.
The Senior Advisor to the French Ambassador Jean – Francois as a day, in a statement of defense to Aaracah received by all of Iraq [where] a copy of it, “This aid represents a vivid picture of international support for Iraq by the countries of the world, and an expression of genuine Agaftna with the Iraqi government and people, and recognition of us the great sacrifices offered by the Iraqi army in its war against terrorist Daash gangs, especially since Iraq is now the first line of the face of global terrorism and extremism , which suffered from France and the world. ”
for his part, Secretary of Mira Department of the Ministry of defense , Major General Fadhil Thamer Ugaili, said that” this aid comes at an important time when our armed forces achieved impressive victories over evil and underworld gangs, prompting the international community to stand by the Iraqi army and the justice ofhis case, which represents the defense of the entire humanity. ”
Download
http://www.alliraqnews.com/modules/news/article.php?storyid=40822

Said federal police captain Raed Jawdat, Friday, joint forces advancing to liberate the rest of the city of Fallujah after the imposition of control over its city center.

Jawdat said in a statement received / balances News /, “Our forces have controlled Fallujah police directorate and advancing to liberate the rest of the city after the imposition of control over its city center.”

He added, “The combined forces were advancing towards liberalization revive all the city of Fallujah after the collapse of the defenses repulsed Daash terrorists and their escape from the land of the battle lines.”

And managed security forces on Friday of liberation of Fallujah’s city center and raise the Iraqi flag over the building Alqaimmqamah.anthy 29 / D 24