Shafaq News / The head Kaz Gazprom oil Russian Alexander Dyukov, during a meeting with the head of the Kurdistan Regional Government Naچervan Barzani, on Thursday, said his investment in the oil and energy activities will continue in the province of Kurdistan, alluding to seek to expand the scope of activity in Kurdistan soon.

A statement for the presidency of the provincial government responded to the Twilight News, that as part of his participation in the World Economic Forum held in the city of San Petrsburk in Russia, head of the Kurdistan Regional Government Naچervan Barzani and his accompanying delegation met after the day Thursday, 16.06.2016 afternoon with the head of Kaz Gazprom Russian denied.

The statement noted that during the meeting, the President Kaz Gazprom denied Russian pleased to Barzani’s visit to Russia, stressing that investment their activities in the field of oil and energy will continue in the Kurdistan region and will try to expand activity in the Kurdistan Region soon.

The statement noted that Barzani for his part thanked the president of the company on the warm welcome and expressed his delight with the decision Kaz Russian oil company Gazprom to expand its activities in the province of Kurdistan.

Barzani praised all the company’s activities and completed to date in the Kurdistan Region, expressing his willingness and readiness of the government to provide facilities that lead to further development in the field of energy in the province of Kurdistan.

At the center of the last meeting, the two sides touched on some topics related to the situation in the region, Iraq and the Kurdistan Region in respect of economic, financial and commercial domain, according to the statement himself.

Ratified by the US State Department on Thursday, military sales to Iraq worth $ 181 million, and pointed out that the contract includes aircraft maintenance, (AC-208) and equipped with spare parts and equipment chock, it confirmed that the purpose of the contract is to reach the air force Iraq to “stage-sufficiency self. ”

The agency said the military security cooperation at the Ministry of Defence Secretary, (the Pentagon), in a statement, I followed (the long-Presse), said that “the US State Department, approved today on a foreign military sales deal for Iraq worth $ 181 million related to the maintenance of aircraft (AC-208) fighter light, equipped with spare parts and equipment market is chock other as well as the engineering training services. ”

The statement added, “The new deal would allow the Iraqi air force, continue to conduct fleet of eight aircraft of the type (AC- 208), offensive light until after the end of the current contract, which expires this month.”

The statement pointed out, that “the objective of this deal is that the Iraqi air force to become self-sufficient in the field of aircraft maintenance with logistical training there will be no difficulty absorbing this support for Iraq.”

Baghdad had asked the Foreign-running sale of five-year deal to maintain and sustain the fleet of fighter jets of the model (AC / RC- 208), which includes the deal, operational maintenance with repair holidays and provision of spare parts, repair and maintenance of aircraft main components with engineering services, as well as training Iraqi staff on maintenance while providing logistical equipment for aircraft.

The plane (AC- 208) known aircraft, “Cessna 208 Caravan” of the light combat aircraft that could be armed with missiles Hellfire, which also has the capabilities of reconnaissance and aerial surveying tasks while providing intelligence.

The head of the government, Haider al-Abadi, on Thursday, the Ministry of Oil to complete an economic feasibility study that contribute to the perpetuation and increase production projects, including those related to natural gas.

This came during a chair-Abadi, a meeting of agents and general managers at the oil ministry to discuss a “detail of the plans and Strategies for the work of the ministry’s future and raise the profile of the oil sector of the country and the completion of projects that contribute to its evolution,” according to a statement Information Office of the Prime Minister, received the (long-Presse) a copy of it.

It was stressed during the meeting, the “Walk the projects are economically feasible, that contribute to the perpetuation and increase production and to overcome all obstacles to complete it.”

The outcome of the meeting, for “taking a series of decisions and directives that contribute to increased natural gas production and the advancement of these projects, especially Basra Gas.”

The participants also discussed, “a number of topics on the agenda relating to export and cooperation with the Ministry of Electricity and pipelines and take appropriate action.”

It is noteworthy that Iraq is wasting more than ten million dollars a day because of the associated production of oil and natural gas investment, since the discovery of oil and Wael last century.

{Baghdad} Euphrates News Search General Commander of the Armed Forces, Haider al-Abadi with the US Central Command, preparations for the Liberation of Mosul.
A statement by the prime minister and the agency {Euphrates News} received acopy of it on Thursday that “al – Abadi met in his office of the US Central Command , General Joseph Votal and his accompanying delegation were discussed during the meeting victories achieved by our heroine in Fallujah and the preparations for the Liberation of Mosul and train and equip Iraqi forces.”
Gen. Park Votal victories achieved and that dazzled the world , stressing his country ‘s continued support for Iraq in its war against gangs Alarhabiyh.anthy
http://alforatnews.com/modules/news/article.php?storyid=119798 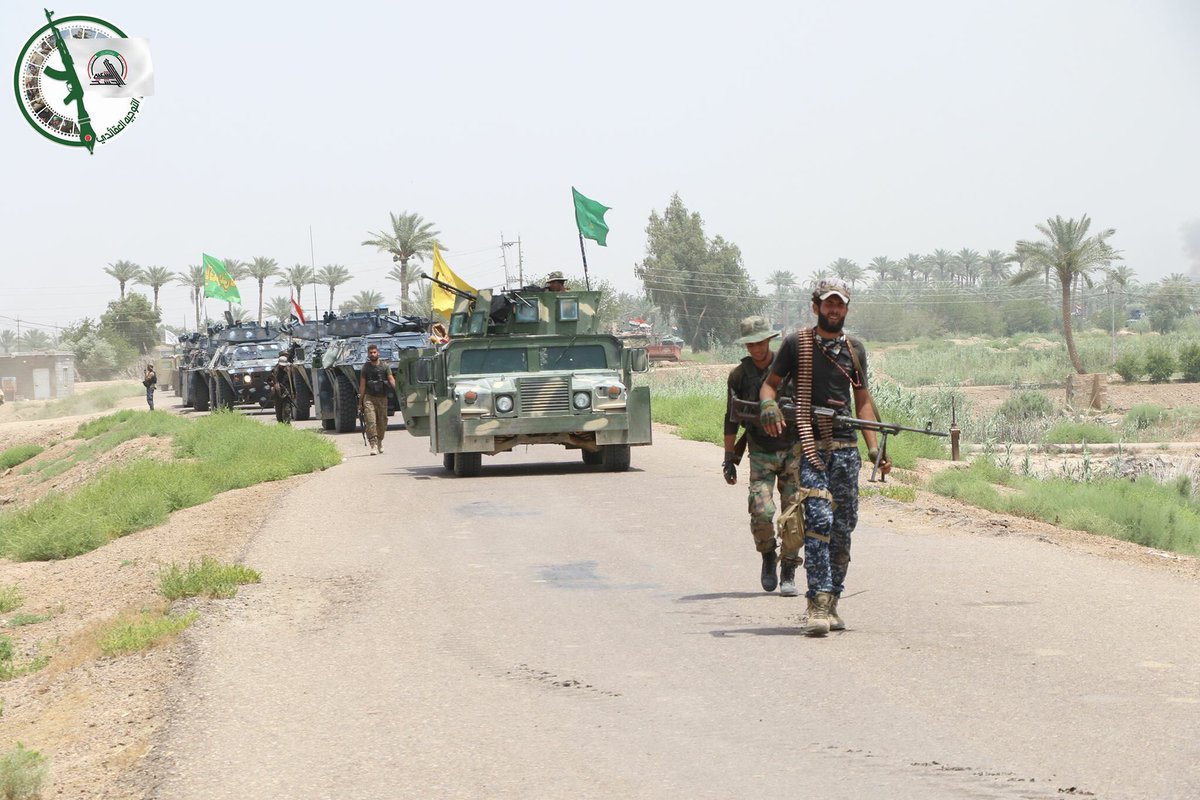 Detecting General Secretary of the Ministry of Peshmerga Jabbar Yawar, on Thursday, about the presence of US ground forces kill alongside Iraqi forces in the south of Nineveh battles.

He said al-Yawar’s / balances News / “The news received about the presence of US ground force fighting alongside Iraqi forces.”

Yawar said that “American power, according to the information that they are fighting on the one hand Salahuddin Camp Speicher towards the south of Nineveh and Anmtk information about the strength of those forces and their weapons and their tasks” .anthy 29/33 h

Search Director General of the Trade Bank of Iraq, Faisal Sam Alheims with Conception Flannery, Managing Director of the Office of Citibank in Iraq examine how which will develop and strengthen banking relations and financial exchanges between Citibank and the Trade Bank of Iraq, as well as lifting the barriers that stand in the way of traffic and movement of money Iraqi around the world). He said a statement received (time) yesterday that (the meeting between the two sides is part of the bank’s policy of developing relations with major international banks and financial institutions around the world and the recruitment and use these relations to serve the customers the bank and the provision of advanced banking services on a global level and to meet the development and reconstruction requirements the reconstruction of areas affected by the terrorist attacks).

Said Niazi architecture Ihsanoglu, in an interview to the (long-Presse), “The dismissal of the general managers of the banks decision right step and the beginning of a reform of the banking business,” Mady said, “but it should have been done through the legal process and not about the absurd.”

Ihsanoglu said that “three of the temporary staffing employees assigned (contracts) substitutes for agricultural, industrial and real estate banking managers may not be and is not legal because they are not originally personnel,” and wondered about “who were chosen or studied their biographies, especially the Ministry of Finance includes specialists not involved so but that the ministry does not know anything about how their choice. “

He said Ihsanoglu, that there are “several accusations directed to Director of Bank of Commerce (TBI) Dry Hamdiya, as well as referral of special files bank to the Integrity Commission and the courts,” and expressed surprise at the “choice of general manager of the same bank, and not to refer the former banks of the integrity of the courts managers.”

He stressed Ihsanoglu on the need, “open competition for both has the experience, competence and integrity and specialization to choose the best for the management of these banks,” returned to “the word exemption for managers two principals is featured in Iraqi law because alterations or dismissal, transfer or retirement of validity validity Council of Ministers and not the boss. “

He said Parliament rapporteur to, that there is a “form number four at the Central Bank of Iraq is populated by candidates to be subjected to standards and obtaining security clearances and that did not happen when the dismissal of bank managers,” pointing out that “the names that are nominated are not well known in the banking industry does not have the experience adequate. “

It is street by street, nearly every house booby trapped. ISF dismantle 300 IEDs daily average. Good progress being made

Shaalan said L / balance News /, that “the security forces managed to purge a large number of areas of Fallujah,” he said, adding that “the troops will be able to liberate the city faster than ever before attributing the cause confusion in the ranks of the elements of” Daash “terrorist.”

He added that “in a few days will be full liberalization of Fallujah and will be raised above the buildings of the Iraqi film,” explaining that “the security forces will not stop the progress towards the cleansing process.”

He pointed out that “the joint forces managed to seize a large number of the weapons for” Daash “bout in the neighborhood,” pointing out that “the forces approaching from the government complex for the city of Fallujah.”

He pointed out that “the elements of the criminal organization starting to escape from Fallujah with the progress of the joint forces.”

The joint forces are engaged in fighting in Fallujah to release it from gangs “Daash” criminal, while the source device counterterrorism announced incursion depth of Fallujah and the clash with Alarhabiyan.anthy 29