An Islamic State loyalist waves the group’s flag in Raqqa, Syria, on June 29, 2014. (Reuters)
By Liz Sly May 21 at 6:04 PM
BEIRUT — One of the Islamic State’s most hunted leaders delivered a rare speech Saturday that suggested the militants are feeling the pinch of recent territorial losses and the killing of key officials in U.S. airstrikes.

But the defensive tone of the speech, delivered in an audio address posted on one of the Islamic State’s websites, also suggested that the militants are contemplating the prospect that their senior leadership will be wiped out and their last important cities lost.

“Do you think you have won because you have killed one or more leaders? It is a false victory,” he said.

“Even if we lose Raqqa or Sirte, we won’t be defeated,” he added, referring, respectively, to the Islamic State’s de facto capital in Syria and the city in Libya it more recently conquered.

Just as significant was what the speech did not contain.

There was no claim of responsibility for the downing of the EgyptAir flight that crashed Thursday into the Mediterranean. Investigators have yet to determine what caused the plane to crash.

The speech was not delivered by Baghdadi, despite feverish speculation by Islamic State supporters throughout the day on social media that the leader would be addressing them directly.

However, Adnani, like Baghdadi, has several times been rumored to be dead, and the address demonstrated that he is alive. Baghdadi delivered his most recent speech in December, and Adnani had not spoken publicly since October.

This address came after months of setbacks in which the Islamic State has been pushed out of a string of key towns and cities, including Palmyra, Ramadi, Sinjar and, most recently last week, the Iraqi town of Rutbah near the Syrian border. U.S. officials also claim they are successfully targeting a growing number of the group’s top leaders.

{Baghdad: Euphrates News} Search Prime Minister Haider al-Abadi Saturday with US President Barack Obama, the relations between the two countries and the challenges of security, political, economic and the war on terrorism and the victories achieved on Daash gangs, where the US president stressed that his country will increase its support for Iraq in order to overcome financial crisis going through as a result of lower oil prices.

The statement added that Obama congratulated Abadi victories achieved in the wet , stressing the readiness of the United States to provide expertise to Iraq to cope with the security challenge.

He noted that the two sides discussed relations between the two countries and the challenges of security, political, economic and the war on terrorism and the victories achieved on Daash gangs.

Obama offered his condolences to the prime minister and the Iraqi people , the recent terrorist bombings that has gripped Iraq and expressed his country ‘s full support for Iraq in its war against terrorism.

He said the US president, according to the statement, that the country will increase of support for Iraq in order to overcome the financial crisis as a result of lower oil prices. He pointed out that Obama urged all countries to help Iraq and coordination with the major industrialized nations at the conference this month to provide all support to Iraq and his government in all areas.

Obama congratulated Prime Minister victories achieved in the wet , stressing the readiness of the United States to provide expertise to Iraq to cope with the security challenge.

The statement said that Abadi stressed for his part that the liberalization of land operations are ongoing and we will continue the liberation of Fallujah soon and go to liberate every inch of the land of Iraq. He

also stressed that Iraq ‘s past reforms in all sectors , especially economic and achieves victories , despite the many challenges and the efforts of the United States and clear to support Iraq in its war against terrorism.

US President Barack Obama renewed in a telephone conversation to have with Prime Minister Haider al – Abadi US support for Iraq in its war against Alarhab..itba

US President Barack Obama renewed in a telephone conversation to have with Prime Minister Haider al – Abadi US support for Iraq in its war against Alarhab..itba

Babil province announced on Saturday, the disruption of the official working for government departments in the province on Sunday and Monday on the occasion of the visit except the popular exams.

She said the province in a statement received / balances News / copy of it, that he, “the occasion of the visit of Sha’ban decide to disable the official working for government departments to maintain on Sunday and Monday.”

The statement added that “the holiday exclude service departments and the performance of the exams,” .anthy 29/33 h

Special – balances News
Counting MP from the Bloc Liberal Almozani Charter, Saturday, a meeting of leaders of political blocs with Parliament Speaker Salim al-Jubouri as a mere distribution of roles.

He Almozani L / balance News /, ” The Liberal bloc is not interested in meeting al – Jubouri , with the leaders of political blocs , ” pointing out that ” the meeting is just a distribution of roles and is based on the personal benefits to them.”

Said MP for the Liberal bloc, said , “When what has been held meeting hurt the interests of Iraq , we will be first Alhazeran , “stressing that” these meetings were held to a country where we are now. ” It ended 29 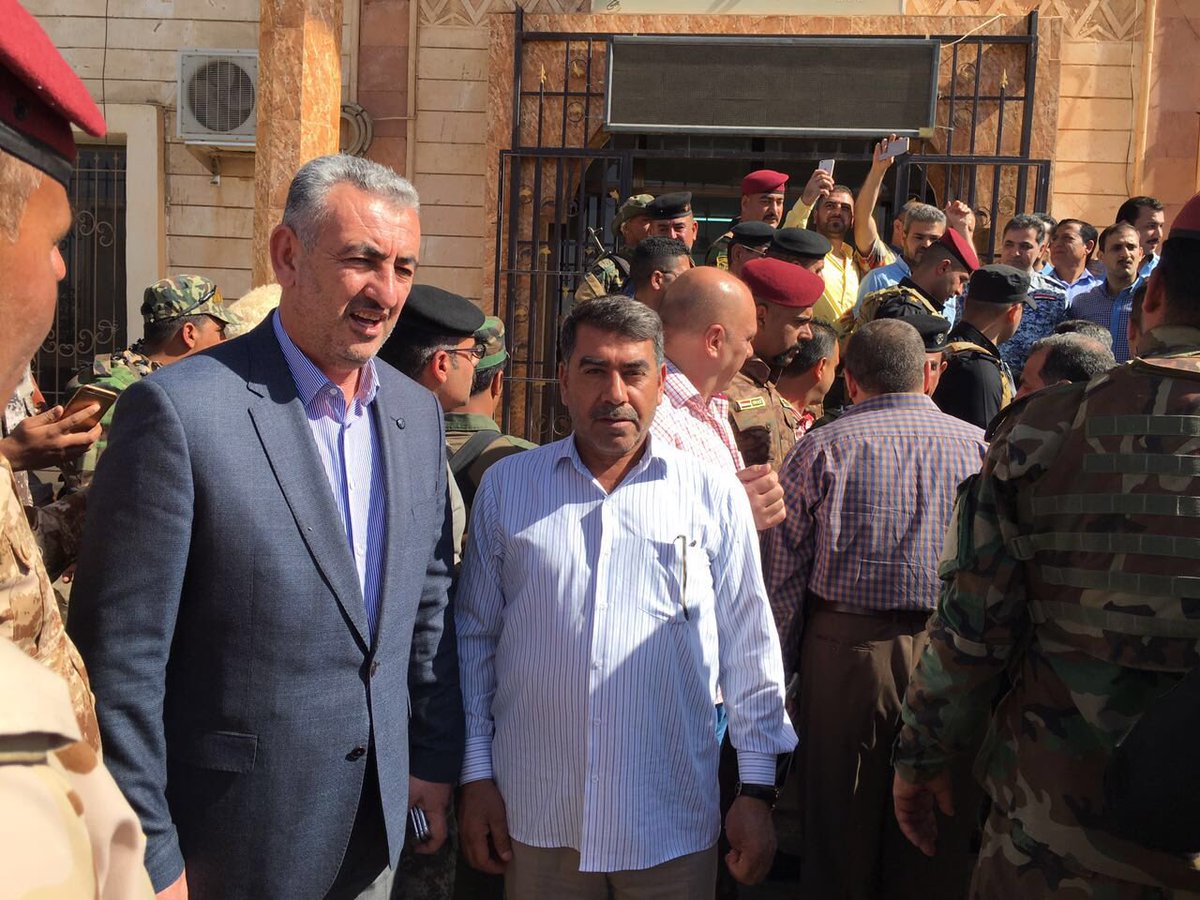 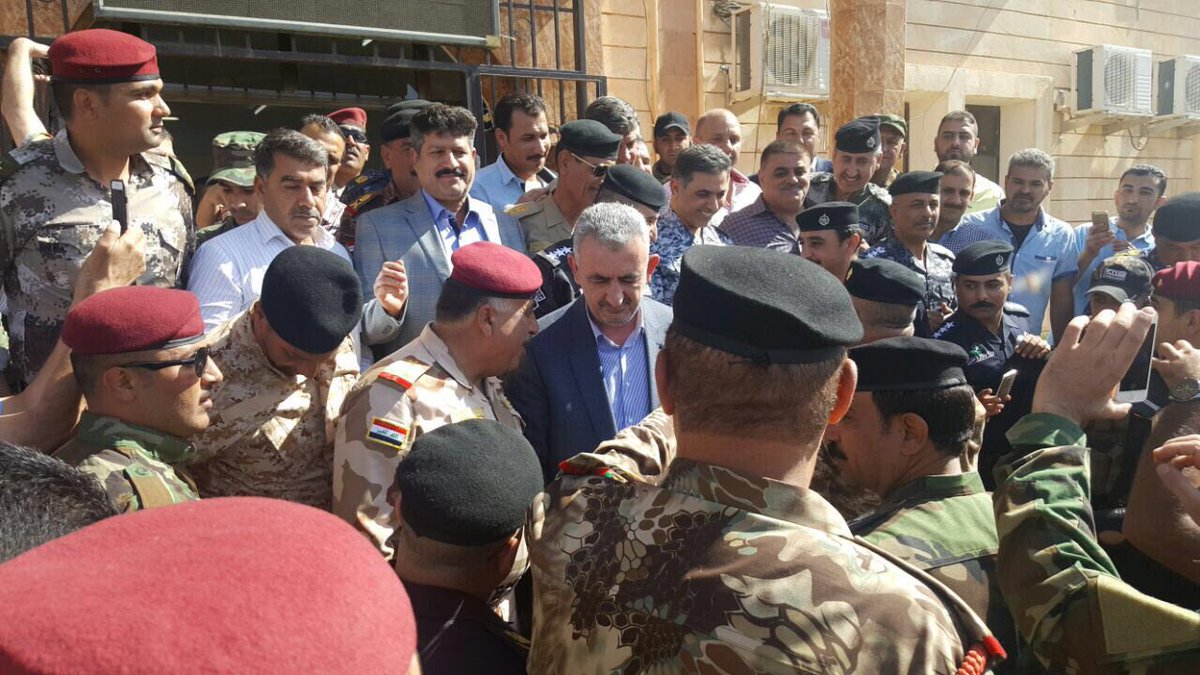 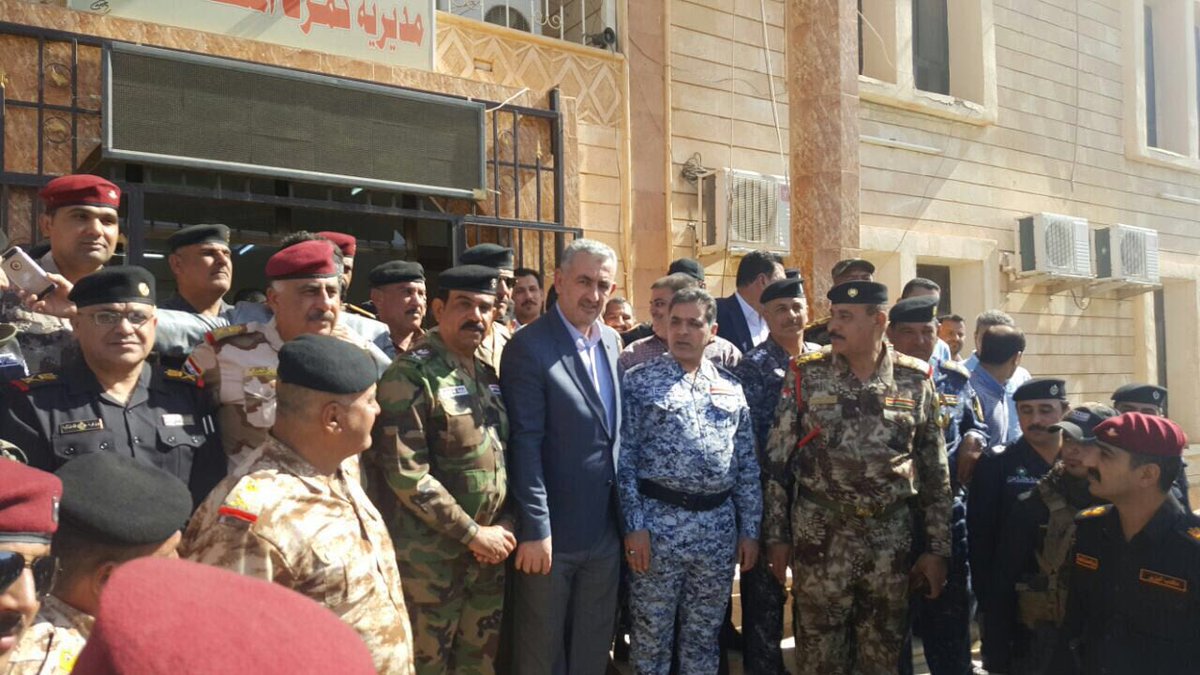 Sohaib Alrawi @Sohaib_Alrawi
Now at #Traibeel border crossing with #Jordan. Soon all of #Anbar will be liberated.

According to a parliamentary source, the Sabbath, that the heads of political blocs held an emergency meeting at the home of House Speaker Salim al-Jubouri, to discuss recent developments in the country.

The source said to the reporter / balances News / “The emergency meeting of the heads of political blocs held in the house of parliament speaker Salim al-Jubouri.”

The source, who preferred not to be named, said: “The meeting was held to discuss the recent developments and the return of parliamentary sessions green and the storming by the protesters” .anthy 29/33 h

The expected reopening of Iraq’s border with Jordan will allow for both return of refugees; resumption of trade.

AMMAN, Jordan (AP) — Iraq’s border crossing with Jordan is expected to open in about two weeks, after an almost year-long closure, allowing for a resumption of vital trade and a return of Iraqi refugees, an Iraqi diplomat said Saturday.

Iraq had closed the crossing in July because large areas of the border province of Anbar had fallen to Islamic State extremists. But since its rapid expansion in 2014, IS has lost territory in Anbar in recent months, most recently the town of Rutba.

The capture of Rutba by the Iraqi army this week cleared the way for reopening the Trebil crossing, but security forces need time to clear explosives planted by the extremists, said the Iraqi ambassador to Jordan, Safia al-Souhail.

Rutba is located about 90 miles (145 kilometers) from the border, on the Jordan-Iraq trade route that links Amman and Baghdad, the respective capitals of the two countries.

“We are expecting the opening of the borders in no longer than two weeks’ time,” the ambassador said. “It might be less, it might be a little bit more, but this is the time frame that we have been informed about.”

In closing the border last year, Iraq said it wanted to deprive IS militants of taxes they impose on cargo trucks driving through the area.

The closure dealt a blow to Jordan, with exports to Iraq dropping from $1.16 billion in 2014 to $690 million in 2015. Pro-Western Jordan is part of a U.S.-led military coalition against IS, which still controls large areas of both Syria and Iraq.

“We hope that the crossing will open sooner than later, because it is of crucial benefit to both Iraq and Jordan,” said Jordanian government spokesman Mohammed Momani.

Still, it is unclear if opening the crossing will automatically lead to the resumption of land trade.

The Iraq military may not be able to secure the long desert highway from IS counterattacks that could discourage truck drivers and business people who once used the route. The vast deserts on the fringes of Anbar province, traditionally used by smugglers, were out of government control for years, even before the IS takeover of some of the territory.

In Saturday’s announcement, the Iraqi ambassador said she also hopes an opening of the border will bring back large numbers of Iraqis from Anbar who sought refuge in Jordan after the initial IS land grabs.

However, booby-traps set by the extremists might slow any return. In Anbar’s capital, Ramadi, several dozen returnees were killed by such explosives after the Iraqi army retook the city.